This is another success story about using an ordinary telephoto lens as a tube lens for an infinity objective, in this case a Nikon CFI Plan Achromat 10x NA 0.25 WD 10.5mm (part number MRL00102).

The telephoto lens in this case is one that I expected would not work very well. It is the entry-level 55-200 mm f/4.5-5.6 zoom lens that came with my Canon Digital Rebel kit back in 2004.

To my surprise, it works fine.

Here is the setup. 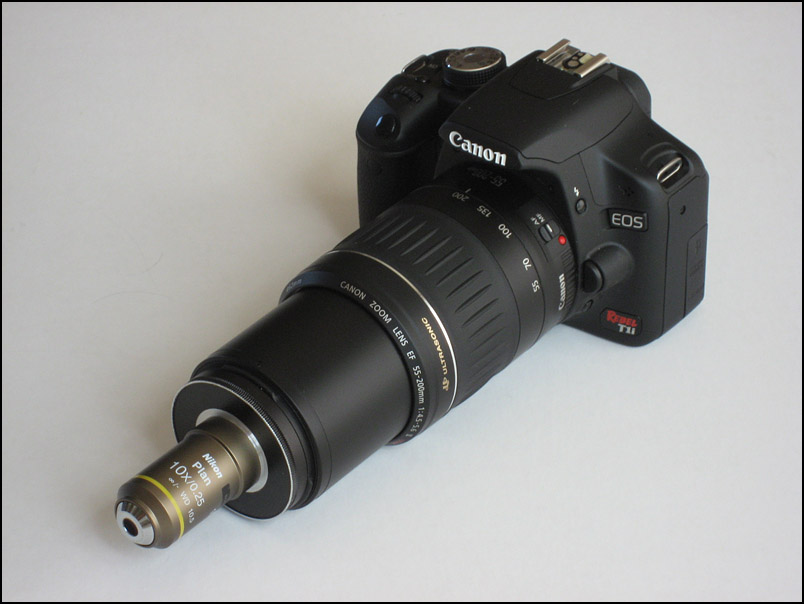 The mounting adapter shown here is homemade, consisting of a metal screw-in lens cap with a small chunk of aluminum sheet epoxied to the back of it, the front faced smooth and the glued pair threaded to fit the objective. I've screwed the ring portion of an old filter on the back to give a little clearance from the telephoto's front element.

Edited to add: Note that much better adapters are now available commercially. Search eBay for m25 m52 adapter. One current adapter is HERE. The objective itself can be purchased new from Nikon, or at other suppliers as listed in one of our FAQs. 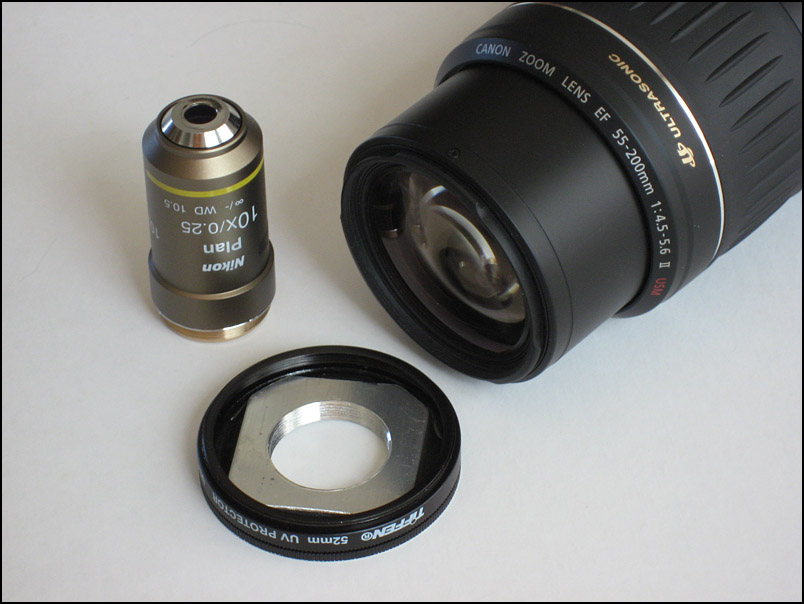 According to my stage micrometer, the combo gives 9.65X, just a hair under nominal 10X. I presume the discrepancy is due to the telephoto not being quite 200 mm, but I haven't checked that.

To evaluate image quality, I compared the infinity combo against a Nikon CF N 10X NA 0.30 on bellows at 160 mm extension. (Yes, 160 mm. Should have been 150 mm, but I didn't realize the error until I had all the pictures shot. Oh well, it doesn't affect the comparison enough to matter.)

I ran two test subjects: a moth wing and some silicon carbide sandpaper. Results were consistent, so I'm only showing the moth wing.

Quick summary is that the CFI combo has slighly less resolution at image center but slightly better at near the corners. It also has slightly lower contrast overall. 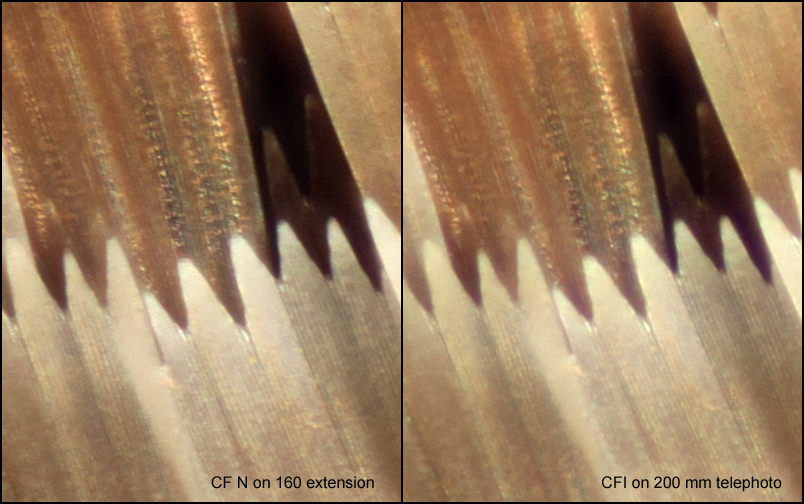 Nearer to the corners, the CFI combo has more resolution, but again you have to pixel-peep. 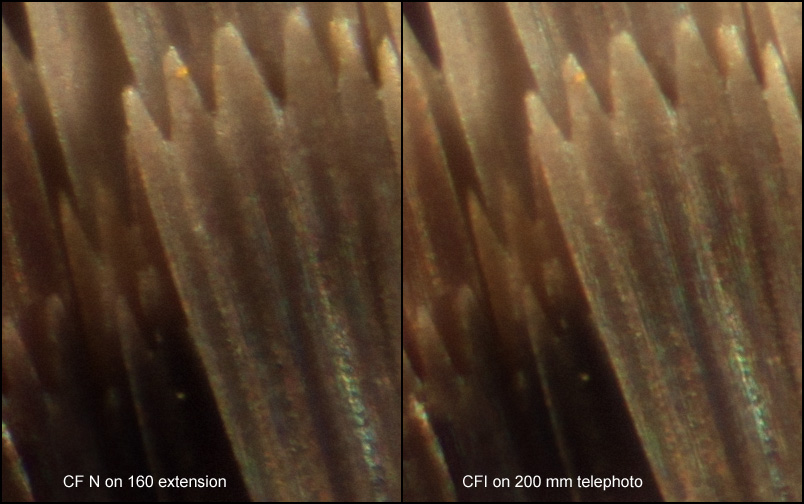 As an indication of overall sharpness, here is the upper left corner of the CFI combo image at 50% of actual pixels. 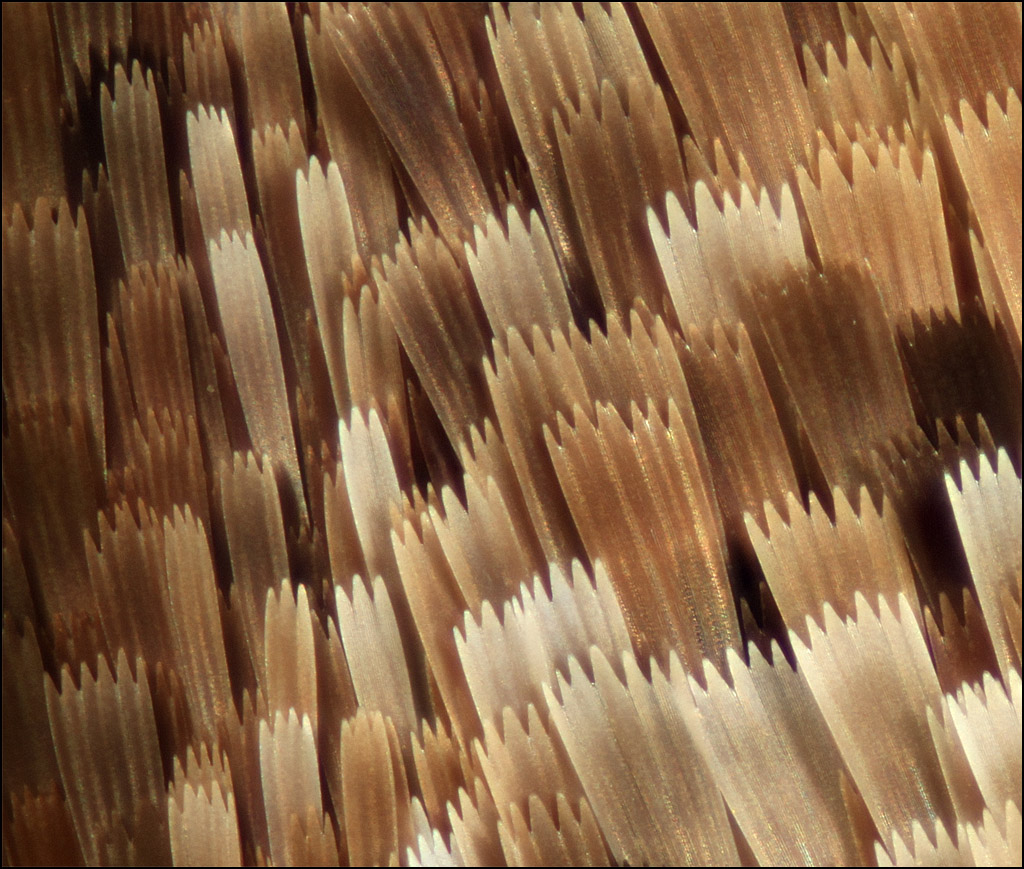 This image quality is just fine for anything I want to do. In addition, the combo seems to play better with the T1i's metering than the CF N on bellows does. In LiveView with bellows, M-mode is often not usable because when the exposure is set correctly for image capture, the live view is much too dark. I have to use Tv mode (shutter priority, "automatic" aperture) despite that the camera obviously knows it can't change the aperture. Go figure. Anyway, with the combo, live view in M-mode comes much closer to imitating the actual exposure.

I did run into two issues that together may explain some of the contrast loss. The first issue is that this telephoto combo tends to vignette, so to avoid that, I had to mount the objective very close to the telephoto's front element. Then when I first assembled the mounting adapter, I took the shortcut of leaving the glass filter in place. The result was so contrast so low that at first I wondered if I had fouled a surface with grease or something. Nope, just needed to remove the filter element. Apparently there was enough light bouncing back and forth between the objective and the filter to put a haze over everything. Granted it was a dirt-cheap filter, but I still wasn't expecting it to have that much bad effect. Anyway, I now wonder if part of the contrast loss could be due to light bouncing between the objective and the very nearby front surface of the lens. If so, that could be an argument in favor of keeping the two apart as far as possible without vignetting.

Bottom line is that I'm quite pleased with this combo. It's easy to use (compared to CF N on bellows) and the image looks good. Oh, and the objective cost $29.50 on eBay. What's not to like?

I hope this is helpful. I look forward to hearing more reports about other setups.

interesting. the biggest problem is finding/making an adapter.
Top

Buy a screw-in lens cap, drill a hole in it, and hold the objective in place while running a bead of hot glue around the threads. Add the filter ring as I did, and you're good to go. I machine stuff because I like the way the lathe handles feel in my hands.

Rik
I like your adapter which looks pretty typical of the way you seem to do things very nice work. (I like those machine tool handles too when I can get my paws on them)

Did you black the rear surface of it after photographing it. That might have an effect similar to the glass.

You really have this testing thing down well. Thank you!
I love this forum!
Top

Thank you for the test, I was thinking that the infinity would not work well with a zoom lens; but I am happy that I was wrong.

3. A M42 to RMS adapter (this adapter allows you mount only objectives with RMS thread):

g4lab, thank you for the kind words.


g4lab wrote:Did you black the rear surface of it after photographing it. That might have an effect similar to the glass.

Aha! Yes, obvious, of course. That explains the nagging feeling that I was overlooking something obvious!

(Sure enough, didn't even think about it. I love it when I mess up like that!)


I love this forum!

It's a good community -- lots of ideas, lots of sharing. We can move much faster and better as a group than we can individually.

Rogelio, it was your report that prompted me to try this in the first place. Many thanks!

I am planing a similar project with a 150mm macro and mitutoyo objectives. Your results give me encoragment.
Top

have you tried this stepdown ring? I ask the question because there are two 42mm mounts out there. M42 and T-mount.

Most lens threads are 0.75mm thread pitch. I can work an adapter with either though and ordered this ring. I had looked previously for a 42mm stepdown ring in the past and hadn't seen any.
Top

Rik did you by any chance try a finite objective on the zoom?
Top

ChrisR wrote:Rik did you by any chance try a finite objective on the zoom?

Short answer: I just now took some pictures with a CF N 10X NA 0.30 instead of the CFI. They're awful, consistent with lots of spherical aberration.

Long answer...
In the beginning, I did a quick test with a CF N 10X just to get a quick look at vignetting. That situation looked promising, as long as I could mount the new objective very close to the telephoto. After that, I set aside the CF N and waited for the CFI to arrive. I quickly tested that, using a different adapter that did vignette, and it looked so good that I was motivated to spend time making a good adapter.

What I did just now was to test the CF N and CFI using very similar setups, both placed a couple of centimeters in front of the telephoto. 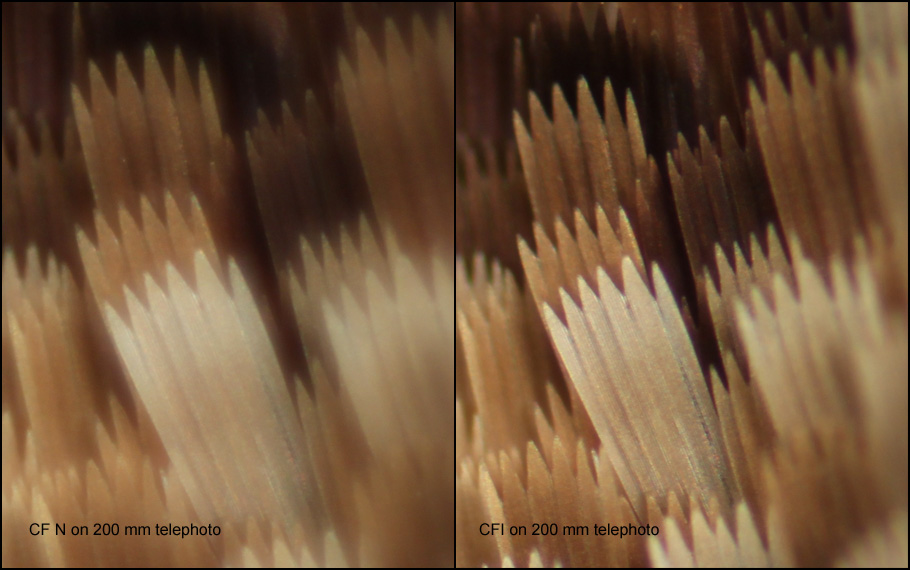 The next obvious question would be whether I have tried the CFI on bellows. The answer is yes, but not very extensively. In quick tests, the CFI on bellows is a lot better than CF N on telephoto (perhaps due to the CFI's smaller NA), but it's not as good as CFI on telephoto. Qualitatively the same problems: overall haze and loss of fine resolution, consistent with spherical aberration.

I guess you really do have to use these lenses kinda sorta the way they're designed to be used.

Cyclops wrote:What do you mean by infinity focus objective?

An "infinity objective" is one of the newer models that is designed to be used in connection with a "tube lens". The objective acts like a magnifying glass, forming a virtual image "at infinity". In this virtual image, each point on the subject is represented by a bundle of parallel rays, just like each point in a landscape presents itself to your eye as a bundle of parallel rays. (Well, almost parallel anyway.) The tube lens then acts like an ordinary camera lens, taking the parallel bundles of rays coming "from infinity" and focusing them to form a real image on the sensor.

This contrasts with the older style "finite" objectives, in which the objective forms a real image all by itself.


Cyclops wrote:Does it work at other zoom settings or just when set to 200mm-is there a focus shift when zooming?

Whether it "works" is a different question. When the zoom lens is set to much less than 200 mm, the image vignettes with the corners going dark and losing quality.

What happens when you use a longer focal length lens, perhaps like a 300mm?
Top

With a longer focal length lens, the magnification and coverage goes up in proportion.

Nikon CFI objectives give rated magnification when used with a 200 mm tube lens. Using the 10X with a 300 mm tube lens will give you 15X.

There should be no problems with aberrations.