Several years ago, one of our members created a thread to discuss some problems he was having in trying to stack a certain flower. The difficulty was what we have come to call "stacking mush", in which areas with only low contrast detail end up containing no detail at all. The original thread is HERE.

I ran across that thread while doing a Google search this afternoon, and I got curious to see what improvements have been made in almost 3 years of software development. So I ran the stack through current versions of Helicon Focus (HF) and Zerene Stacker (ZS). The results were very encouraging.

The current HF version 5.0.3 produces much less mush than whatever was current in January 2007, although both methods A and B still have some problems with halo and neither method preserves OOF background detail as well as ZS.

The current ZS version 1.0 (PMax method) has no problems with halo, mush, or background detail. Its biggest drawbacks are some amount of contrast buildup and unrelenting preservation of dust spots, producing trails. Fortunately in this case the dust trails can be fixed up in a few seconds of retouching, using the background frame as source. The DMap method of ZS produced unacceptable halo on this stack and is not shown.

Shown below are the results, default parameters in all cases, no sharpening or levels adjustment, no retouching except for the dust trails of PMax. Interesting areas to note are the background petal just below-left of center, the left end of the big in-focus petal, and the upper edge of the right-most petal. Copies of background and foreground source frames are shown first for reference. 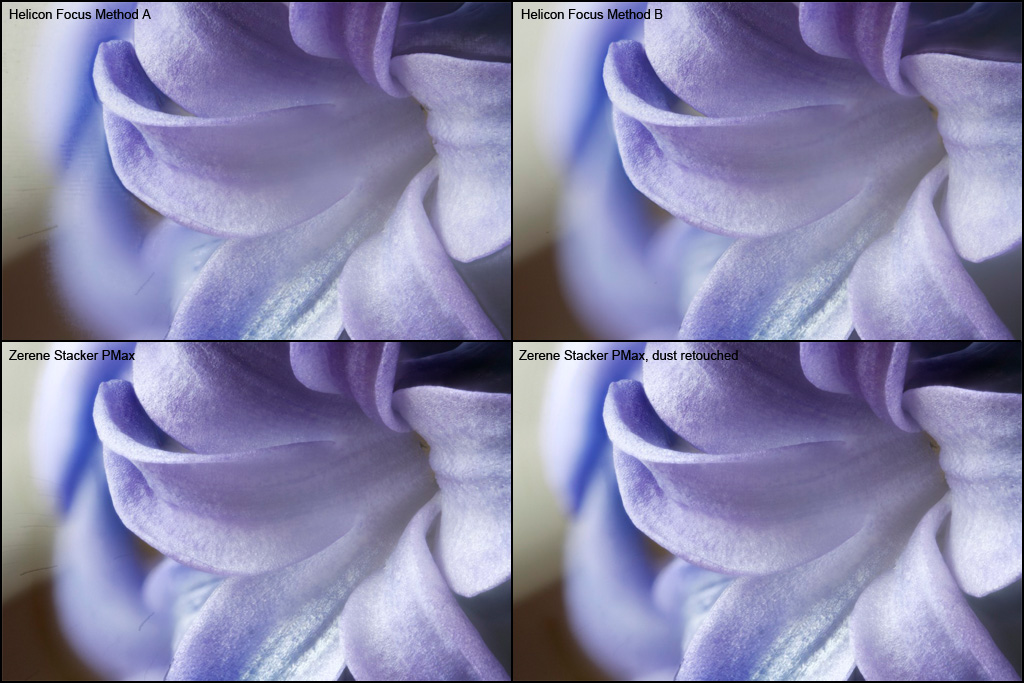