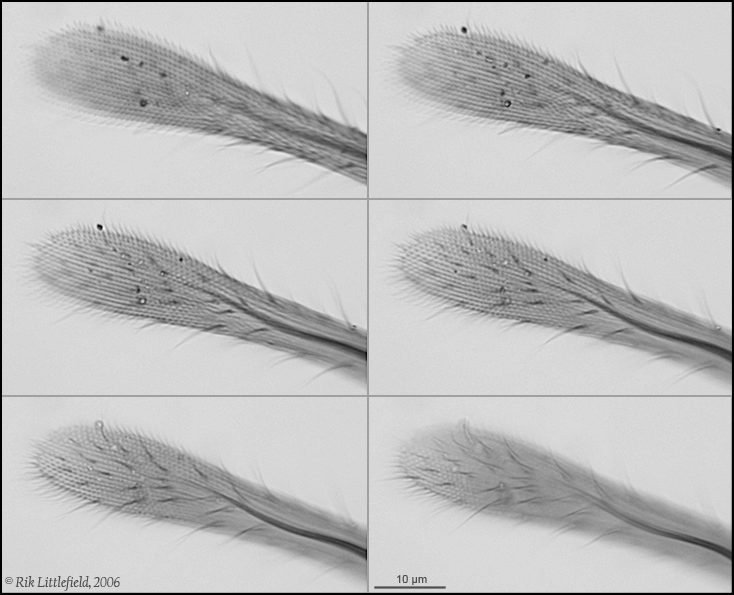 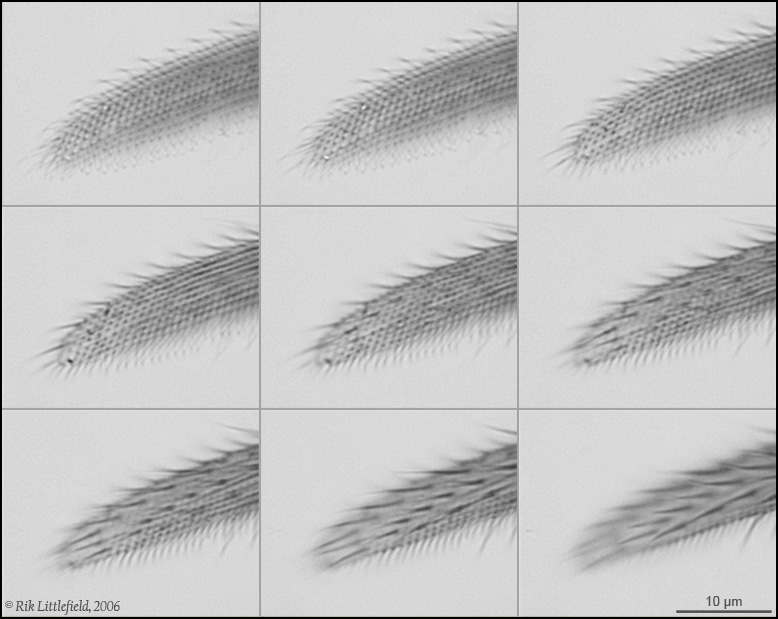 A couple of weeks ago, I posted over in the macro forum some shots of the whole foot of a jumping spider. Jumping spiders have "sticky" feet that get their adhesion from Van der Wals forces acting on a multitude of tiny "setules" that are clustered at the ends of spatulate hairs. The setules can be clearly imaged using SEM, and the macro shots might just barely be resolving individual setules, so it was natural to ask what they'd look like with a high resolution compound microscope.

Shown above are a couple of answers to that question.

I'm pretty sure that the top set of pictures is one spatula lying flat, while the lower set is a different spatula lying a bit on its side. It seems that each spatula has a few widely spaced bristle-shaped projections on one side, and a dense regular array of setules on the other side. Spacing of the setules measures 0.7 to 0.8 microns, smack in the middle of the size range that we guessed from some of the SEM pictures that people tracked down.

This was my first foray into high magnification photomicroscopy. I'm pretty satisfied with how these shots came out, but the equipment setup was definitely what you'd call "cobbled together" and the whole affair was rather more tedious than I'd like to do on a regular basis. (This, mind you, from a man who regularly shoots 70-100 frame stacks for extended depth of field. Hhmm...

PS. These shots are green channel only. Color added no useful info and I found the CA fringes distracting.

Here's what a larger section of the slide looked like, using a 10X objective with no cropping. Shot through the oil drop left over from the 100X objective. The bubbles are in the immersion oil used as mountant. 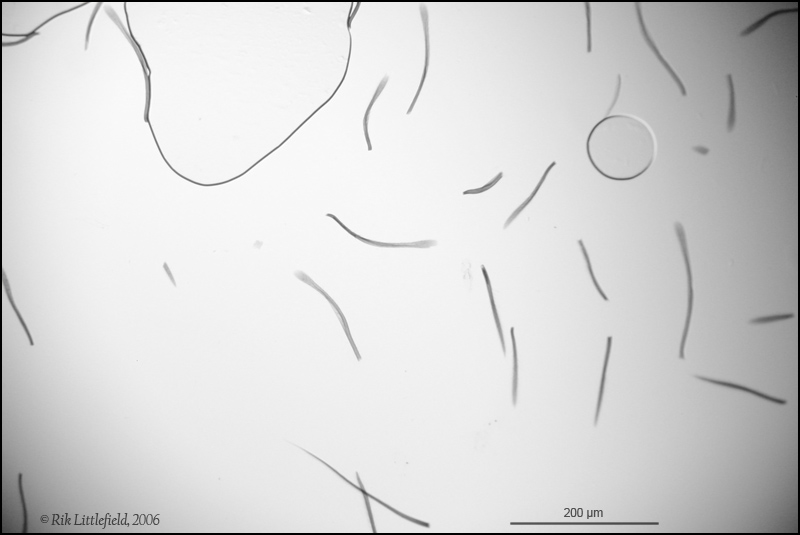 
and the whole affair was rather more tedious than I'd like to do on a regular basis. (This, mind you, from a man who regularly shoots 70-100 frame stacks for extended depth of field. Hhmm... )

You are really taking this Jumping Spider apart aren't you Rik

Talk about tedious...just stitching all these images together to make the composites is enough to try my patience.

An interesting post you have here though and the images are great, however, I wonder about that last one though, from all the spidery parts scattered around. Though I am not especially keen on spiders, I cannot help but to feel a bit sorry for it.

...all the spidery parts scattered around...

Ken, I never thought I'd hear you express sympathy for a spider!

But that strew does look a bit messy, doesn't it?

It was pretty interesting putting it together, though.

What I did, working at 45X under a dissecting scope, was to scrape off some of the hairs into a small pile on the slide. That by itself was not simple, considering the small size of the hairs and the fact that they're designed to stick to anything they touch.

Then I dropped a tiny bit of immersion oil -- about a microliter -- onto the pile. I was expecting problems with wetting -- figured I'd get a zillion little bubbles trapped in the hairs. But that didn't happen at all. The oil wicked right in and wetted everything perfectly. In a couple of seconds, what I had was a small pile of hairs still stuck to the slide, but completely wetted with immersion oil.

That situation didn't last long, however.

As I watched, intensely wishing I had a video camera running, each of the hairs individually detached itself from the slide and quickly floated to top dead center of the oil drop. They reminded me ever so much of what happens with those foam pads that kids play with in a swimming pool. You know -- the ones you just can't resist sinking by standing on them, but then they get loose and come shooting to the surface like that sub in Hunt for Red October? Fun to watch!

Pretty straightforward after that, as far as slide prep was concerned. Plop on a cover slip, a drop of water on the condenser, oil for the lens, and it was ready to go.

The tedious part was largely in getting the photo gear set up. I only have a binoc head, so I had to work through that. First I tried using my point-and-shoot through the eyepiece. That worked, sort of, but the camera doesn't have manual focus, and it doesn't have a remote release, just a 10-second self-timer. Overall, it was annoying, unpredictable, and I wasn't getting quite the quality I wanted, so I switched strategies and worked up the scheme of using a macro lens almost like a projection eyepiece, focused on the aerial image at its usual position 1 cm down the tube to keep the objective happy.

After I had the optics worked out, it took some more messing around to find hairs that were properly positioned to tell the story, and to shoot a collection of focus depths that I thought would work.

Photoshopping the montages was really quite relaxing after wrestling with the other stuff!

But hey, at least now I've got the images captured so the info won't disappear immediately, and I'm sure I learned some reusable technique along the way.

It seems like you got some spectacular shots of those hairs Rik. Some sacrifices always have to be made in the name of science and knowledge and you went the extra mile here

Good enough answer for me.

What was that sound? Scale bars being tossed out the window, of course.

No, I am sure they serve some purpose but I just don't feel like purposing with them.

A great explaination of how you went about all this Rik, very interesting indeed and thanks

. Now put that poor spider back together and lets see something else. The poor thing will probably be on a telethon here soon...

Ken Ramos wrote: No, I am sure they serve some purpose but I just don't feel like purposing with them.

I've been scratching my head all afternoon about this issue of scale bars, and I think I've got it figured out. Sorry to be taking this so seriously, but...

The whole question (I think...) boils down to whether the photographer wants the viewer to know the size of the subject accurately and reliably.

If there's a scale bar accurately placed in the image, then not much can go wrong.

If there is not a scale bar placed in the image, then there are gobs of things that can go wrong. For example...Without the scale bar, and following Jahn's guidance*, the viewer might guess that the microscope has 1600 microns across the field with a 10X objective, 160 microns with a 100X. Then he might figure that the pictures are pretty much full field, which means that with the 100X objective they'll be about 160 microns diagonal, or about 133 microns width.

Presumably this sort of calculation works pretty well for direct viewing,or Jahns wouldn't have described it so carefully.

But does it work for photos?

Not very well, it seems. Let's consider some examples. The pictures that I posted above were heavily cropped, only about 51 and 27 microns in width. That's a error of up to 5X from the estimate of 133 microns. In one of Walt's posts, I had calculated that his field width was probably around 400 microns (at 400X), but his stage micrometer showed only 125. Error of 3X from my estimate. Even when the pictures really are full field, things can still go wrong to a lesser degree. As you and I discussed in a topic back in March, the number I very carefully estimated for your Meiji's field width was still off by a ratio of 4:5. (I estimated 4 mm at 40X, you measured 5 mm.)

Without the scale bar, the viewer could laboriously estimate/calculate a size that's between 20% and 500% incorrect, assuming that nothing goes wrong in his number-crunching.

Or with the scale bar, the viewer could just measure the correct size, within 10% or so, using little more than counting off thumb widths.

Does that make the rationale more clear?


Now put that poor spider back together...

It all makes sense there Rik but it also seems like a lot of trouble, especially to match the scale to that of a cropped image or an image that has just been enlarged from the original size. I am not one to play around with numbers much, mainly because they give me a headache and I never was good with them anyway and I have my school transcripts to prove it.

It's true, the way that I've always done scale bars involves some number-crunching. That's OK for me, 'cuz my head is wired for crunching numbers (and reading cereal boxes). But I'll be the first to admit that it gets a bit tiresome, and there's certainly some chance for error on my part.

However, there's a much easier approach that involves no number-crunching at all. The magic device is "stage micrometer", and it's nothing more than a tiny ruler printed on a microscope slide. Tiny means like 10 microns per division -- 100 tick marks in 1 mm. Walt gave us a nice picture of one as the third image in this post.

Hhmm... Sounds a lot simpler than what I've been doing, even for high-mag macro work. Maybe I should get me one of those stage micrometer thingies. Christmas is coming, tra la, tra la!

Afternote: Ah! I see that Graham explained this earlier today, in his post over in the Technique forum. Well, at least I'm reassured that our explanations pretty much match!

Nice Rik.... we need to get you playing around with that microscope a little more often!