A lot of my subjects are "windowsill grade" and are covered in keich which an air-puffer won't shift.

Obviously cleaning is very subject dependent but I thought I'd share some of my experiences with wet cleaning a fly.

- First shot is as collected and "air-puffed"
- Second is after a rinse in methanol - takes some dirt off. Why methanol ? Easily evaporates, no residue and I've got bottles of the stuff for sensor cleaning.

- Third is after 60secs in a sonic cleaner with dish detergent followed by methanol to dry it. The cleaner is one of the cheap (<$5) "ultrasonic" jewellery cleaners you see on eBay. They aren't actually ultrasonic, only about 6kHz.

So I think there is a real gain by using one of these cleaners. I am going to make a mini ultrasonic cleaner at 40kHz and test that as well. 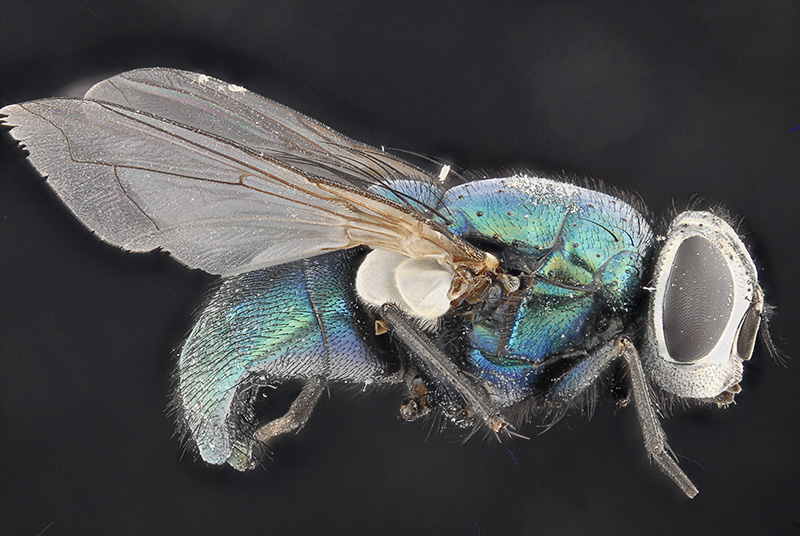 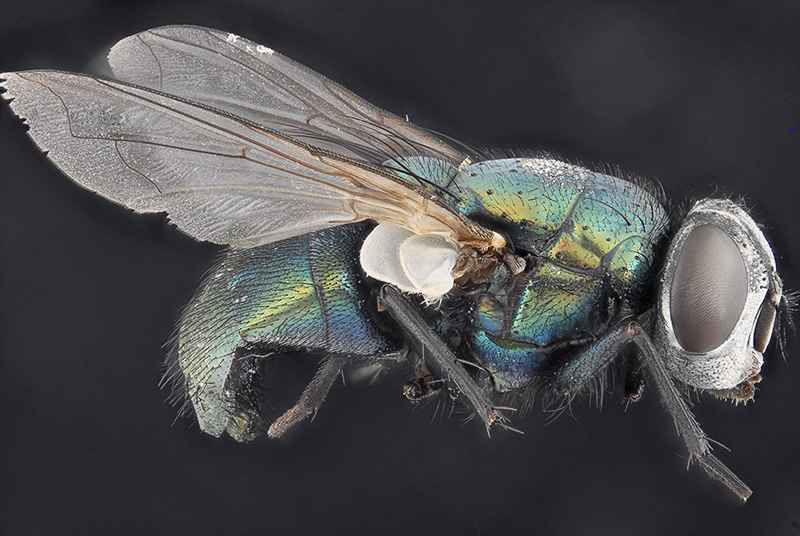 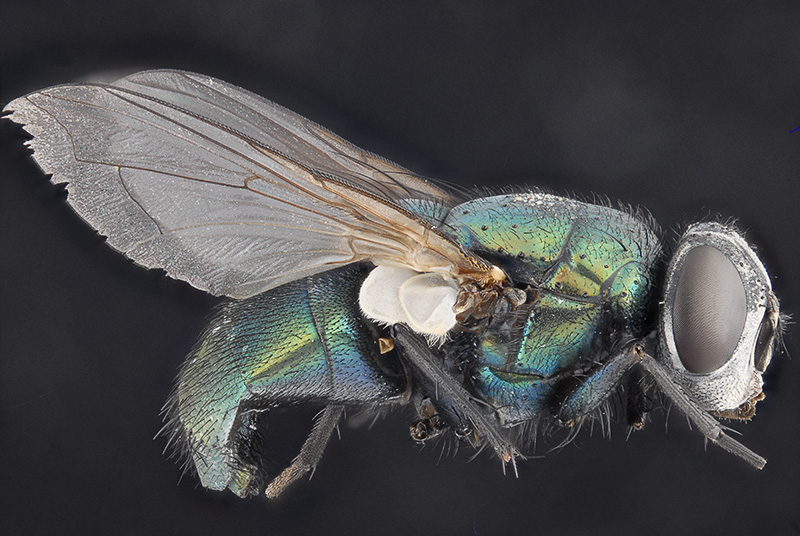 Interesting! I had never thought to use a vibrating liquid cleaner on a subject of this type. Obviously it works quite well.

I'm very happy to be corrected on this point, but my gut feeling is that you don't need to worry about damaging the bug unless it has gotten super fragile from sitting in that windowsill for a long time. You might want to let the thing sit for a minute or so in the water and detergent before starting the vibration, just to be sure that fragile dry parts have gotten a little soft again.

One caution: with hairy subjects, saturating them with any fluid at all is liable to make the hairs clump. Sometimes they can be fluffed loose with airflow, but often they never look quite the same again. I'm talking about things like moth bodies. Your fly here is more bristly, not vulnerable to clumping.

PS. It's not related to cleaning, but I'm curious about these images. The color seems washed out. I wondered if there was a color profile problem, but assigning an Adobe RGB profile didn't put them back to what I would expect. What's going on? Does the subject really look like this?
Top

I could probably resaturate them but for this exercise I did nothing in PS other than convert from tiff to jpg, resize and sharpen.

Cleaning must be extremely subject dependant. A hairy critter might never look the same after a bath. I certainly don't ! I'll probably run some more tests with some hairy moths when I get time just to see.

Hi Andrew
If I remember correctly, one way ultrasonic liquid cleansers work is to form small bubbles in the medium, which promptly collapse. This causes a lot of micro-turbulence which dislodges particles. Probably the liquid is optimised for the frequency, I don't know.

But that of course is for rigid specimens like watch parts. Another technique could be to get the parts of the specimen itself to vibrate, and dislodge the undesirables. I've used it on military hardware with rather more energy, to see what drops off. (Nuts, paint, firing pins..) For that purpose you can use a sweep-frequency oscillator (squegging). Different parts and sub-parts would resonate as the frequency changes.

Ultrasonic cleaners do work by generating microcavitation - the imploding bubbles generate shock waves that dislodge particles. As you drop the frequency you are just trying to couple mechanical energy onto the particles. To be rigorous you need to spend some time also determining not only the besrt frequency but what kind of surfactant and / or detergent to add.

By coincidence, I was reading the 1904 volume of the Entomoligists' Monthly Magazine and came across the following on page 264: -

"Petrol as an agent for removing grease in insects.—The great purity and volatility of this substance, now so well known as a propulsive agent for motor vehicles, suggested to me some time ago its use as a means of freeing insects from "grease;" and having heard from Lieut. Jacobs, R.E.,at Sheerness, that a friend of his was using it for that purpose with success, I resolved to give it a trial. As regards Lepidoptera,I find the results compare most favourably with those obtained from "Benzine Collas" or the usual qualities of benzine used for the purpose. Some badly "greased" moths — e.g., Cossus ligniperda — were thoroughly cleansed by twenty-four hours' immersion in "petrol;" while its very rapid evaporation, especially when assisted by blowing gently on the specimen while drying, frees the body clothing and fringes almost or quite as well as ether does. The beautiful "mane" of silky hairs on the thorax of Gonepteryx rhamni comes up again perfectly, while the delicate colours of this insect, Colias edusa, Lycsena bellargus, and Iodis vernaria — the last selected as a crucial test — were not in the least affected by an immersion of 36 hours. In Coleoptera, a very greasy Trichius fasciatus required two soakings, but the pile was raised again perfectly when dry, and the colour of some much blackened Coccinella distincta was well restored. As "petrol" is sold retail for at most 3d. per pint, its price compares, most favourably with that of any suitable quality of benzine, and enables a large bath of the liquid to be used, of course with due precaution as to its extreme inflanmiabiiity; and I confidently recommend it as a safe, efficient, and cheap grease solvent. — James J. Walker,
Oxford : October 10th, 1904."

A number of interesting things arise from this: -

(3) have the major changes in the formulation of petrol had an adverse effect upon the way in which it can clean dead insects;

(4) this may just be the liquid for the job.

I have used petrol many years ago to break up black shales to free small fossils. This requires a number of cycles of immersion and drying, but it does work.

All possible disclaimers of liability for trying this method!

I'll give that a whirl and see - biggest problem might be getting a small volume of petrol to use - both our family cars are diesels which I guess would have quite a different result !

Methanol gives much less clumping than water and I've yet to try with acetone.

I would have thought "paraffin" would be sufficiently close in composition to petrol to be worth a try.
Also "Carbon Tet" aka carbon tetrachloride if you can get it (I have some in an old fire extinguisher which will never be used for that purpose coz it would produce phosgene, a WW1 poison gas). It used to be a general purpose cleaner.
The rather safer carbon tetrachloroethylene, (which was used as a dry cleaning fluid, though these things change a lot) would be worth a try I think.

You can of course buy little bottles of Dry Cleaning agent in supermarkets, often with a pad on top for rubbing on clothes.
I've used it for knocking out insects, but they unhelpfully tend to come round again. I bet they have a headache.


Edit:
I see the <$5 cleaners you mean.
For £24 there's a contact lens cleaner, which says it operates at 150kHz.
Hmm probably a typo.
And a thought. Cavitation is basically caused by boiling the solution by reducing the pressure locally. So a liquid with a lower boiling point would give a physically gentler scrub.
And to reduce hair-clumping, I imagine you'd want something with a lower surface tension - unless you're dissolving the hairs so they weld together?
Wikipedia says insect hairs may be chitin and calcium carbonate- soluble in all sorts.

Following some published recommendation, I used to put tiny mites and Collembola, lifted out of 70% alcohol, into Tetrahydrofuran, in which they were then placed, using a tiny scoop, in Canada balsam for permanent slide preparations. The solvent evaporated very quickly, leaving bubble-less immersion in the balsam, all setae standing up freely.

Another paper, on chemical safety, suggested that, in long-term storage, the solvent formed peroxides, making it unstable, such that it should be opened remotely.

I had not opened the bottle for some years and contemplated it for some time. Should I open it? In due course, I contacted the local safety officer. He got our toxic chemical disposal specialist to deal with it.

Opening the bottle remotely produced a long jet of flame from it!

I was thinking of dead flies while wrapping a cucumber.

Tried it, it works.
There are two basic types, PVC and LDPE. PVC types cling much better because of that chloride atom, and, as you would expect, pull dust better.
I found it worked best if handled the same way as gold leaf - in other words don't handle it, more than the minimum necessary. Cut a square off and draped it loosely over a dusty bug. Plastic tweezers seemed appropriate.

I still haven't experimented with spark-ignition devices for generating a voltage. Gold plating a cucumber is much more appealing.
Top

ChrisR wrote: Gold plating a cucumber is much more appealing.

Acetone works OK for cleaning debris off of bugs. This Yellowjacket was given a shaking in acetone for 10 seconds, then 'blow-dried' and brushed before photographed. The treatment did not get rid of all the junk, but did a good job.
Image currently at bottom of this page
NU.
student of entomology
Quote – Holmes on ‘Entomology’
” I suppose you are an entomologist ? “
” Not quite so ambitious as that, sir. I should like to put my eyes on the individual entitled to that name.
No man can be truly called an entomologist,
sir; the subject is too vast for any single human intelligence to grasp.”
Oliver Wendell Holmes, Sr
The Poet at the Breakfast Table.

Seriously, how do you do that!?
Top

Incidentally:
One of the contributors (Jari F.) on Diptera.info places his pinned flies in acetone for 5 hours: "to keep colours clear".
HERE

His flies look none the worse for such a long treatment.
NU.
student of entomology
Quote – Holmes on ‘Entomology’
” I suppose you are an entomologist ? “
” Not quite so ambitious as that, sir. I should like to put my eyes on the individual entitled to that name.
No man can be truly called an entomologist,
sir; the subject is too vast for any single human intelligence to grasp.”
Oliver Wendell Holmes, Sr
The Poet at the Breakfast Table.

I've heard of people soaking old pinned specimens in acetone to remove fatty out gassings but doing it proactively is an interesting approach.

One thing I have noticed is that a quick rinse with acetone or similar sometimes leaves unclumpable hairs. You sometimes need to give them a long soak - how long is trial and error !

For drying, I'm toying with building a little drying station with a 30mm computer fan on a stand, and if I really feel like it an IR heater ! Several times I've blown cleaned insects clean off pins as a result of over enthusiastic Rocket Blower puffing