Jalapeno peppers -- in monochrome and in color

Jalapeno peppers -- in monochrome and in color

He gave me the idea of converting some of my work into black-and-white. So I just did this on an old shoot of jalapeno peppers.

In the color photograph, you will notice that I have bright reds and greens, as well as orangy yellow. I wanted all the items to show, so in the conversion process (I use the Hue/Saturation dialog in Photoshop Elements) I exposed everything well. In other words, while I could have made the reds light and the greens dark, for example, I just made everything dark and bold.

I realize that this is not great macro work. Actually, looking at the amazing photographs of the other members of Photography.Net, I now understand that I don't have the equipment to do the macro work that I would like to do. (Perhaps someday I will.) Even then, do I have the talent that you people do? I don't know.

Anyway, here is a photograph in color, followed by the desaturated one: 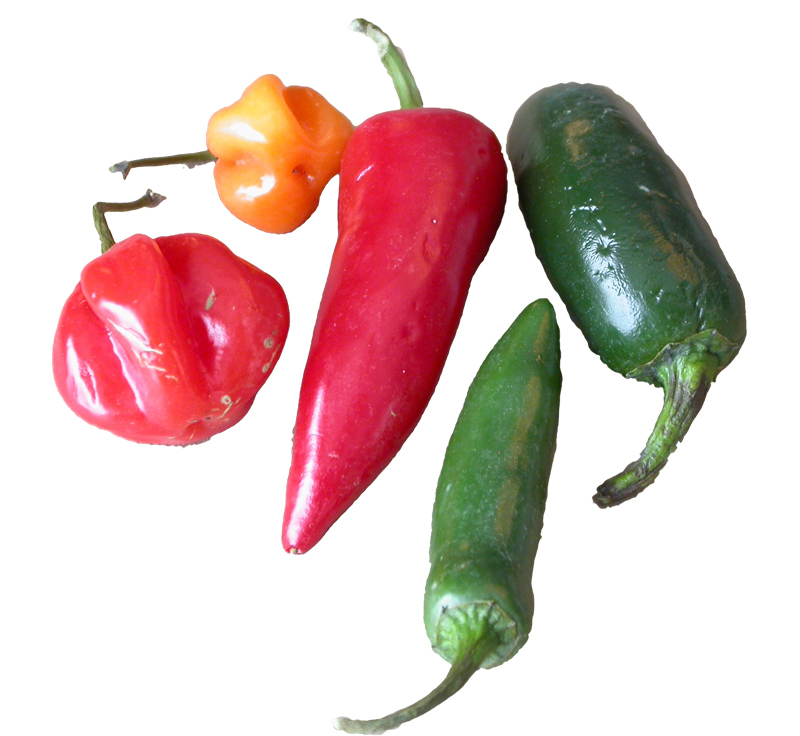 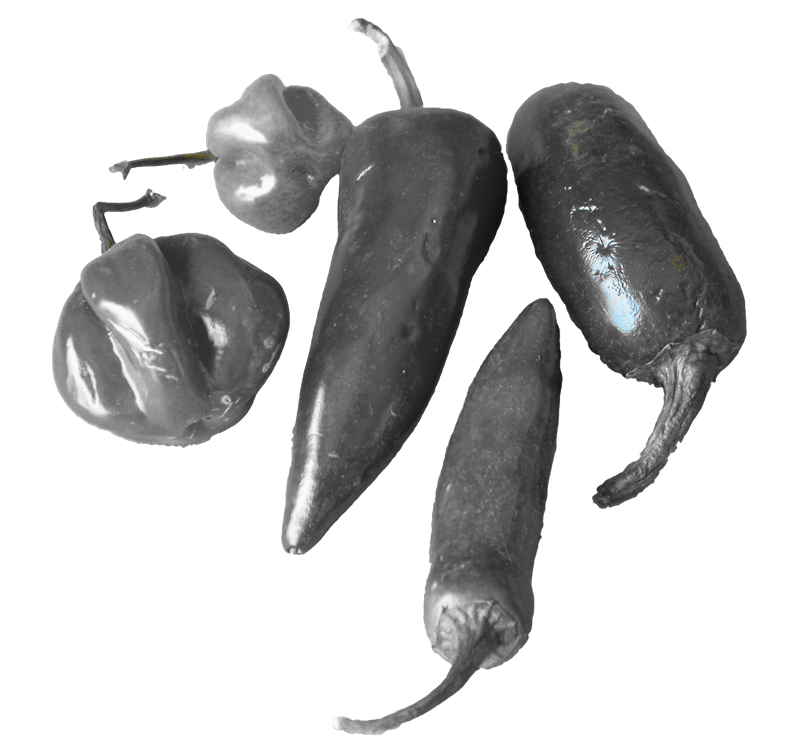 Hi Stanley,thats a neat little still life! The B/W conversion makes for a good demonstration of how colour are translated to tones-note how the green and red look identical in mono! I too have photoshop elements and it lacks a Channel mixer. I did download one for mine and it works great. With it you could reduce the green Channel thus making the green pepper a darker grey or increase the red Channel to make the red pepper brighter. Either way it increases contrast in a mono scene which contains similar tones. Its rather like using a red or green filter on the camera lens when shooting with black and white film.
Canon 30D | Canon IXUS 265HS | Cosina 100mm f3.5 macro | EF 75-300 f4.5-5.6 USM III | EF 50 f1.8 II | Slik 88 tripod | Apex Practicioner monocular microscope
Top

Thank you for the posting.

First of all, would you give me information about the channel mixer you bought for Photoshop Elements. I might be interested in buying it for myself as well, as least once I replace my aging computer, which I hope to do by about year's end.

Second, can't you do what you described using the Hue/Saturation dialog box? Apparently not, on the basis of what you said. But could you please explain to me the procedure in a bit greater detail (or provide a link). I would like to understand this for myself.

Does "Elements" have
Image>Adjustments>Curves?
As the fruits are easily selected separately, you can do whatever you like with each one?
I can show you what I mean if you alow me to post in your thread...

First of all, by all means, post in the thread. You have the right to do that in any case, right?

Photoshop Elements does not have Image > Adjustments > Curves. I guess the full version does have that.

Stanley wrote:You have the right to do that in any case, right?

There's a zero-tolerance policy against reposting somebody else's image without their permission. That's a copyright issue.

The forum guidelines also say no posting images of any kind without permission in somebody else's gallery thread. That's a matter of etiquette -- the presumption is that for gallery threads, the original poster's image is the focus of discussion, and other images may detract from that.

PS Elements, at least my version 5, has:

Hmm...., I thought these were the famous "curves"?

(See, I've installed the English version so that I don't get confused when we are talking about photo editing. But doh! Now instead I always have to ponder when I read in that German book on PSElements where it says: "Überarbeiten->Farbe anpassen->Farbkurven einstellen"

Well my version of Elements is v 1.0. The original version. I got it free off a guy years ago and it does the trick but no curves. I get around it tho with other ways. I did have a link to a curves plug in for PS Elements but when I downloaded and installed it it crashed our Vista powered laptop so I had to remove it.
Canon 30D | Canon IXUS 265HS | Cosina 100mm f3.5 macro | EF 75-300 f4.5-5.6 USM III | EF 50 f1.8 II | Slik 88 tripod | Apex Practicioner monocular microscope
Top

Well yes, there's a dozen ways to do anything in PS and they're all right. Curves makes some things easier than, say, messing about with contrast, levels, brightness etc.

Just a simplest demo of what I mean: 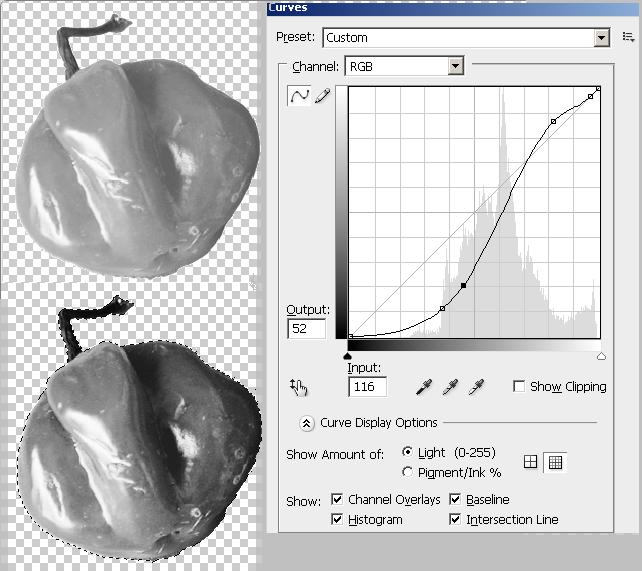 The Red pepper I just desaturated to B&W (upper one), and went into Curves. In the current PS version the Levels histogram is shown as a backgrounds in the curves box, so you can see where most of the tones are.
As you can see, there are no near-blacks, most in the miiddle and some almost burned-out highlights, which you don't want to "push further".
SO I nmade the cyrve steepest where most of the tomes are, keeping the highlights on the original diagonal line. Bringing the toe of the curve across to the right puts some blacks in.
result is the lower one. You guessed that.
It's a bit like the Levels function, but with as many sliders as you want - you can play with the contrast at any tonal values you want.

SO getting to produce high-key, low-key , textures, whatever, is simplified:
I'm not saying this is what you'd ewant, but some quick twiddles produce: 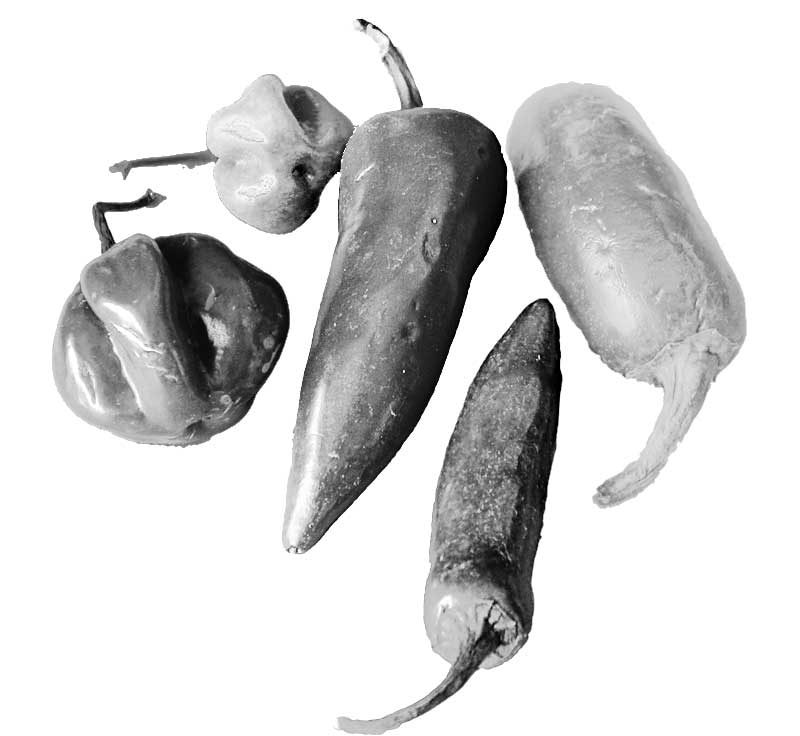 OK, this was very instructive.

So, when you do those various adjustments, why don't they affect all the peppers? Don't you have to first specify reds or greens or blues (those are the channels, right?).

I noticed in your excellent diagram that the channel was RGB (which means all the channels, I presume). Just to be clear, I will restate my question. Do you need to manipulate one channel at a time?

Ah, no.
You'll notice that in the image above there are dashes round the lower pepper. They appear in PS as "marching ants". That pepper is Selected, so any treatments affect it alone. As your original had all the objects separated pretty well, it was easy to Select them individually.

As you say, there are two green peppers. The upper one got a high-key sort of treatment, the lower one got low-key. You could do most of that with Levels, by sliding the middle marker left and right, but in the lower one you couldn't enhance the shadow details at the same time - they'd all go down together.

You CAN work on separate channels, but RGB, or CMYK, aren't necessarily what you want. There's no carrot, aubergine and potato channels, and yellow has red and green in it, so the results of a whole-picture alteration would be different on each fruit.

Here's an example. I took the Preset "Cross Processing" (like we used to between E6 and C41) which whackifies the colours. It deals with each of RGB separately, and you can see the curves on the graph. In colour it's more dramatic, but when you desaturate that coloured image you get the rather boring one below. 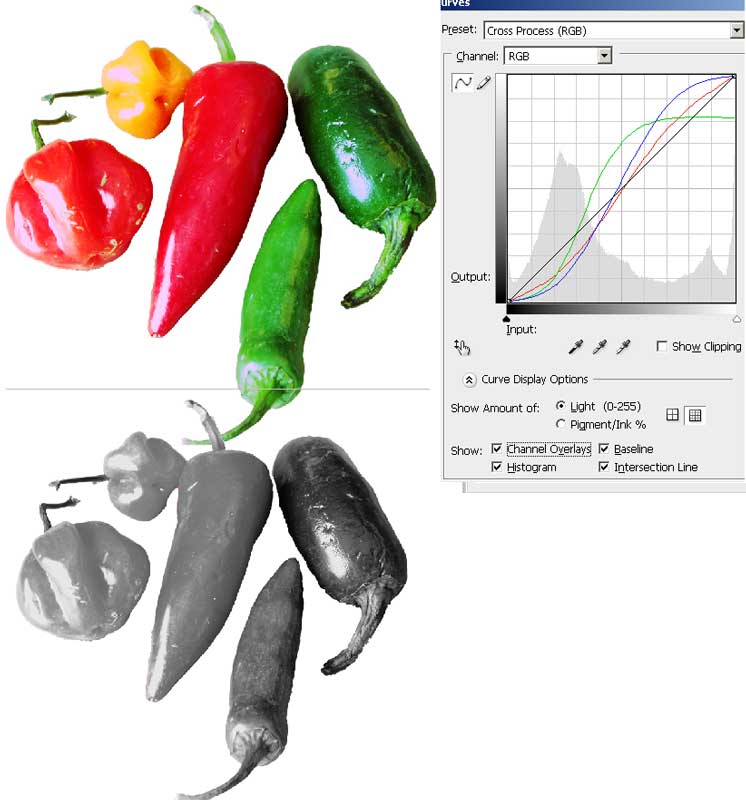 Once you have the individual fruit selected, you can alter the RGB within it using curves, or other colour ranges using Hue/Saturation. With H/S though you can't work on lighter and darker instances of the same Tone (I mean the same red, eg) separately. But you CAN alter the colour directly, which you can't do in Curves!
(Plenty of scope for confusiuon between Hue, Colour, Tone, etc)

In the image two posts ago, in the orangey coloured fruit, I darkened the Red channel's darker parts, which is why it looks a bit different in the B&W version.
Top

Thank you. This is a real breakthrough for me.

It's nice when a "penny drops"!
You're most welcome.

To get one fruit to work on,
draw round it very roughly with the polygonal lasso tool,
Ctrl-J puts that selsction on a new layer, leaving the original.
Click on the white background with the Magic Wand tool, then
Select>Inverse

and you can play around with just the fruit.
(Then try with that layer partly opaque, so a little colour shows through, or try the Blending Modes, between layers