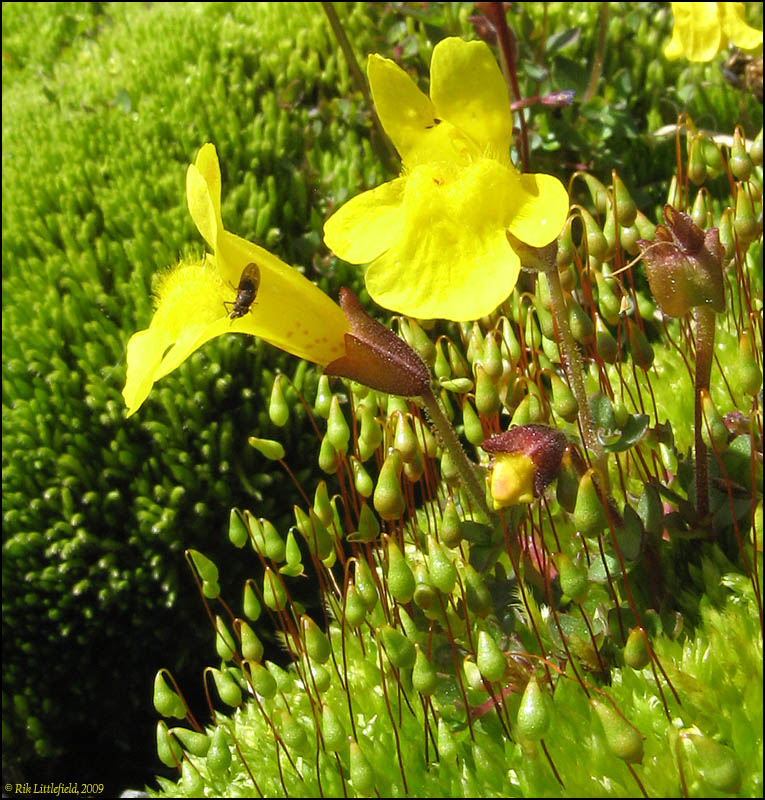 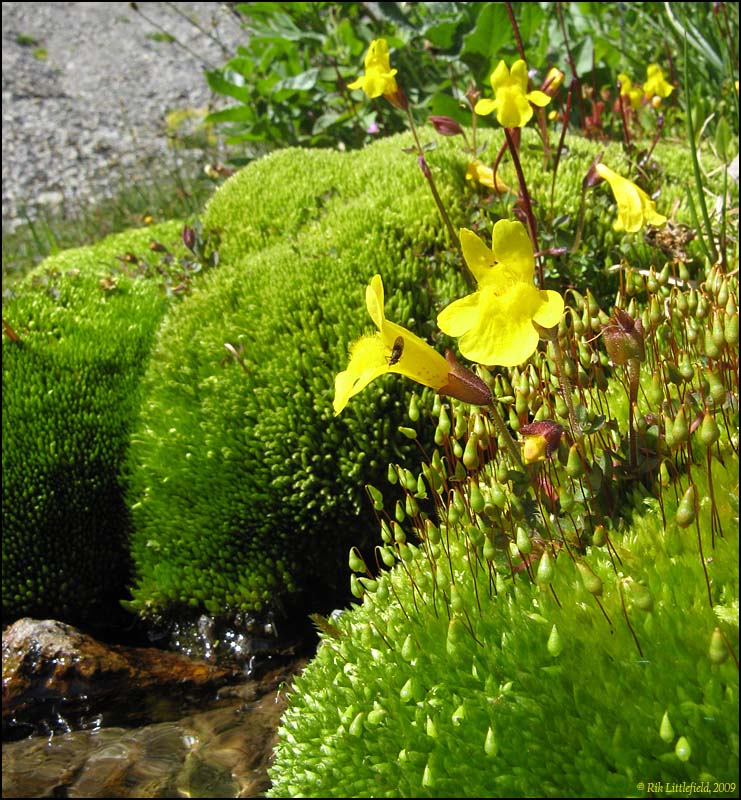 I believe the yellow flower is Mimulus tilingii, one of the "monkey-flowers". The moss and the fly, I have no idea!

This is a souvenir shot from a backpacking trip a couple of days ago.

As seen above, doesn't this look like a luscious place?

But the surroundings are a bit harsh. This is only a few feet away from the base of a nearly barren rockslide at the edge of a glacial valley that has melted out recently. It's very pretty, but the flowers right here are best appreciated through a closeup lens!

The gray background at upper left of the second picture is rockslide. The green splotches on it are a few hardy colonist plants (a different kind -- not monkey-flowers) that have found a bit of dirt between the rocks. Except it's not really dirt, it's volcanic ash. The texture is like beach sand. A very interesting place, like HERE but a little higher.

Beautiful shot Rik. Sorry, can't help you with the type of moss and much less the fly, but it makes you want to run your hands through the photo. Moss has been a pet favourite of mine for many years.

Thanks, Sam. This spot has the finest moss I've seen in many years, perhaps ever. From where I was kneeling (on a rock), there's probably a couple of hundred square meters of this stuff in viewing distance. The area is in full sun, rock and sand underneath, fairly level, and a continuous trickle of water through the whole area. The moss obviously loves it. This is probably the peak of its growing season. At 1910 meters elevation (6270 feet) and 46.5 degrees latitude, this area is covered with snow something like 8 months of the year. Even now, at the end of summer, there's quite a bit of snow left around in shaded depressions. In just a couple of weeks from now, it'll be freezing hard at night (see HERE, third picture). It's a hard place to make a living. But this week, the moss is great!

Cyclops, we have some considerable variety of Mimulus here in Washington. The alpine species tend to be perennial. I'm not sure exactly which species this is. There are several with yellow flowers and similar habits, at least to my unpracticed eye. I fixed the link in my main post to point to what I think is the right page at U.W.'s online herbarium. (Their site design makes it really hard to link to any particular page.) I also added a link to the Wikipedia page on Mimulus, where I discovered that the genus has been reclassified since I learned it a few decades ago. According to Wikipedia,

The about 150 species are currently placed in the family Phrymaceae. The genus has traditionally been placed in Scrophulariaceae. The removal of Mimulus from that family has been supported by studies of chloroplast DNA first published in the mid-1990s. Multiple studies of chloroplast DNA and two regions of nuclear rDNA suggest that the genera Phryma, Berendtiella, Hemichaena, Leucocarpus, Microcarpeae, Peplidium, Glossostigma, and Elacholoma are all derived from within Mimulus and would need to be rearranged.