This is without a doubt the most spectacular wasp I have ever photographed. 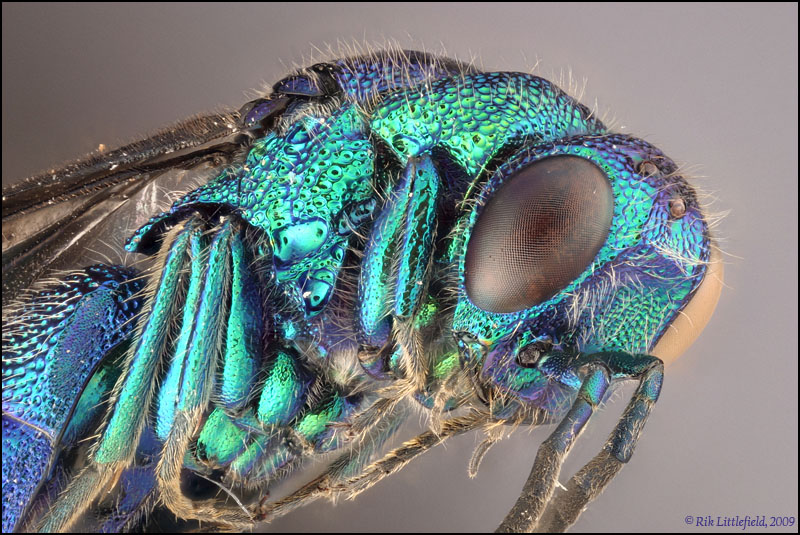 A couple of stereo pairs: 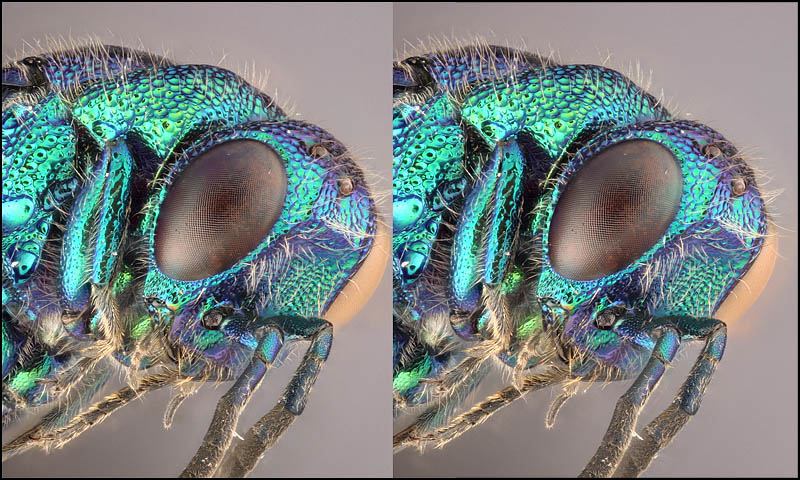 Through an unhappy accident I know a little of this insect's life history.

Late last summer some friends found a mud-dauber nest just outside their front door. They asked me to remove it. I did so, intending to keep it intact. But the removal did not go perfectly. In the process, the nest broke. Several spider carcasses spilled out. But several of the chambers stayed intact, containing what looked like undamaged wasp pupae. I placed the nest in a jar in a sheltered place and checked on it daily. For months. And more months. And more months. Nothing happened. Then a few days ago I got distracted by some construction around my house. And wouldn't you know -- that was when the wasps decided to emerge. Dang! They were dead when I checked again, and just starting to mold.

But I was able to clean this one OK, for the most part. The rear eye is white because it is full of mold. I'm pretty sure the rest of the appearance is intact because (hallelujah!) a live specimen of what must be the same species turned up in my kitchen window today, sniffing around the corners where the spiders hang out.

The surface texture of these wasps is fascinating. I usually think of bugs as being covered with bumps. But in this case, it's clearly craters -- little hemispherical depressions.

Does anybody know the ID of this thing??

It's a Chrysidae of some kind isn't it ?

This is a link I posted in the FAQs:

And one of its links:

Streuth, I was right

Chrysididae are parasites of bees and wasps, mostly. So I would assume that the mud-dauber wasp nest you collected, had been parasitized and you've reared this parasite.

Fascinating! I have changed the title on the topic to match this ID. Thanks for the information, everyone.

Thanks, Jody. I thought it came out pretty well.

What's probably most interesting is that the stereo pairs are made from just one stack(!), using the depth information implied by the sequence of focus slices.

It's a new feature of Zerene Stacker, described HERE.