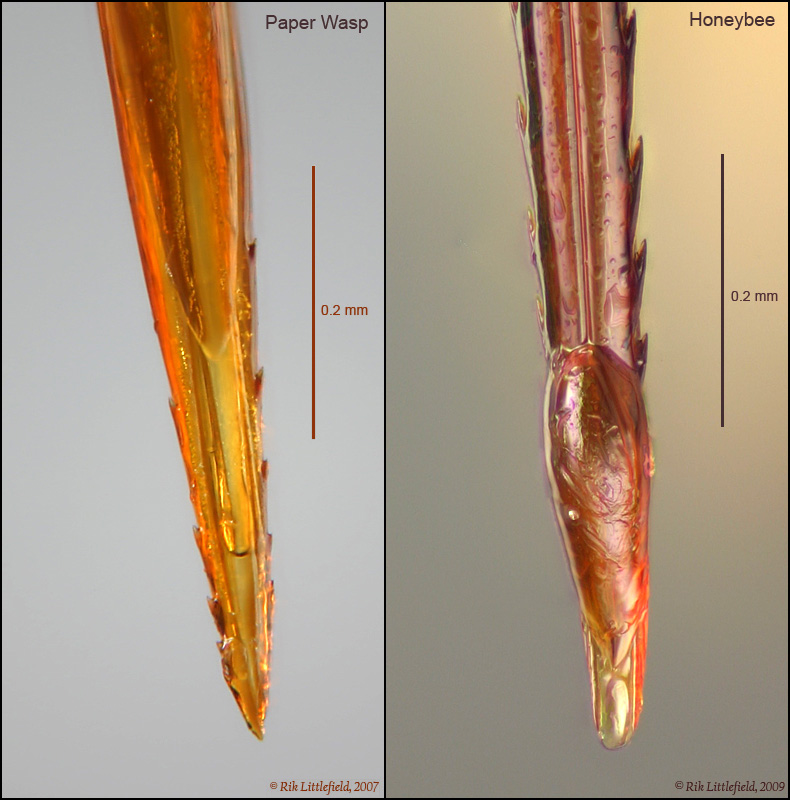 A couple of years ago, I posted out the picture on the left, titled "The sharpest end of a paper wasp".

At that time, DaveW posed the following question:

I did not know the answer, and somehow the question has bothered me ever since.

Yesterday I found a dying honeybee, and today it yielded up the information seen above.

Yes, the honeybee does have far more pronounced barbs!

This is great, I really like having questions answered. But it's the usual story: each answer prompts another question. (Usually more than one...)

The new question, which I'm hoping Betty can answer, is "What might be the stuff on the end of the honeybee's stinger?" In the picture above, it appears to be an integral part of the structure, but interactively under the microscope, it appears to be some bit of gummy residue that is not water soluble. (I haven't tried any other solvents yet.) This was not quite a fresh prep, but the specimen was only frozen first.

A glob of congealed venom ??
NU.
student of entomology
Quote – Holmes on ‘Entomology’
” I suppose you are an entomologist ? “
” Not quite so ambitious as that, sir. I should like to put my eyes on the individual entitled to that name.
No man can be truly called an entomologist,
sir; the subject is too vast for any single human intelligence to grasp.”
Oliver Wendell Holmes, Sr
The Poet at the Breakfast Table.

Beats me! I've always assumed that venom would be water soluble -- the better to mix with the victim -- but I guess there's no reason it has to be.

And come to think of it, that bit of "liquid" at the end of the paper wasp's stinger didn't evaporate all the time I was working with it either.

Well, I finally got around to cleaning off that glob of whatever. It yielded easily enough to a few swipes of pure alcohol on a cotton swab.

I also found a better angle to shoot the thing from, and adjusted the lighting so we can see a little more detail of the piercing ends of the stylets. 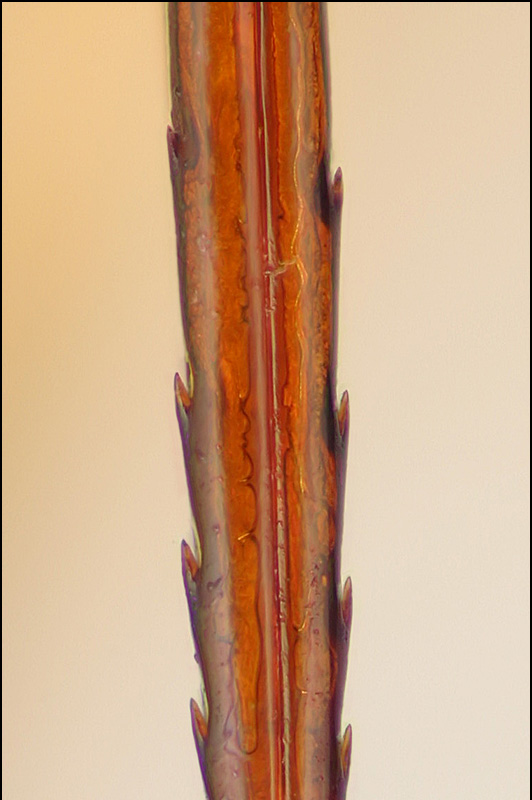 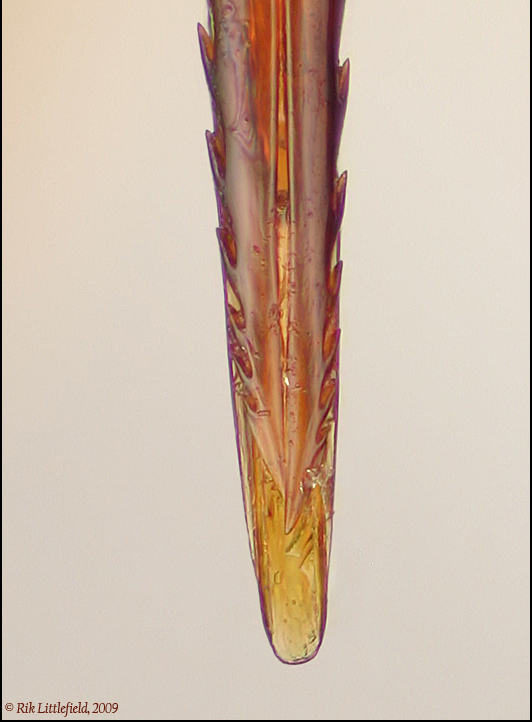 A couple of facts:

The sting can be withdrawn by the worker honeybee if you allow it time. If you brush it off, the sting remains in place and the, attached, venom sac is ripped out of the abdomen and can be seen to continue pumping (pulsating). The bee is killed by its venom sac being ripped out.

The sting of queen bees is not barbed and is repeatedly, if necessary, used to kill any rival queens and is never used in other circumstances.

I hope this comment will not be perceived as barbed criticism!

Oh, I had missed this thread completely till just now. Great photos, Rik!

I would have guessed the same as NU about the glob that you have wiped away meanwhile.

As to the barbed stinger of the honey bee worker being ripped out of the metasoma, one should add that this only takes place when a vertebrate/mammal enemy is stung. Whereas the honey bee worker can retreat her stinger when using it against other bees or insects.
It's the elastic, fibrous skin of vertebrates/mammals that prevents the stinger from being pulled out again. It's thought of as an adaptation against such superior enemies: As Harold said, the stinger being ripped out with the adjacent venom gland, muscles and nerves will go on pumping venom into the wound, even if the bee has been brushed off by her superior opponent.
Additionally, for other defending bee workers the volatile scents evaporating from the ripped-out stinger apparatus mark the enemy as the target to be attacked.

That last photo of the honey bee worker's stinger shows very nicely the two lancets or 1. valvulae: At the tip of the stinger you can see the two structures in a position staggered against one another). This is shedding light on their function: They are movable against each other, and work their way into the enemy like little saws (Imagine the two blades of those electric kitchen sawing knifes moving back and forth against each other.)

Betty and Harold, thanks for the additional information. I had never thought about the difference between vertebrate and invertebrate targets. A bit self-centered, no doubt, being one of those mammalian thingies myself.

When I looked closer at the honeybee stinger, I was surprised at how knifelike the ends of the lancets are.

From the earlier paper wasp photos, I had more the impression that the lancets were pointed but roughly semicircular in cross section.

I will have to take a closer look at those things, the next time a specimen presents itself.

These really are incredible photos.
The lancets certainly look like they have a knife edge structure but intial impression is that evolution got the design wrong. A better evaluation is that evolution got it correct and my initial evaluation is wrong. So, why are the fine cutting edges on the inside of the lancet? It would appear that they cut as the stinger is pulled out - maybe to inflict damage so that the venom can diffuse into the tissue of the unfortunate "victim".
NU.
student of entomology
Quote – Holmes on ‘Entomology’
” I suppose you are an entomologist ? “
” Not quite so ambitious as that, sir. I should like to put my eyes on the individual entitled to that name.
No man can be truly called an entomologist,
sir; the subject is too vast for any single human intelligence to grasp.”
Oliver Wendell Holmes, Sr
The Poet at the Breakfast Table.

Fascinating and beautiful photos, thanks for posting! I shudder to recall what both of these actually feel like.

Unless I misunderstand, this would be (edges of) the groove for eggs in a fertile female. This now acts as a venom needle, presumably with little modification required from morphology evolved for the original function.

Perhaps for clarification:
In Riks last photo above, at the tip of the stinger we are looking at three different longish parts:

- the two first valvulae or lancets which are serrated and not fused/grown together medianly, and still not fully extended in the photo.
and
- the second valvulae which are fused/grown together medianly to form, at the caudal end, the one single stylet which, in this last photo, is seen at the very end of the stinger. (It's called "Stilett" in German, I am not sure if it's stylet in English, but it's the caudal end of the fused second valvulae)

In this way the serrated tips of the lancets/first valvulae saw into the opponent, until, in the fibrous vertebrate skin, they get jammed and stuck.

(Whew, I hope one can get the picture, and my description doesn't sound too odd?!)

That's how I'm understanding it.

OK Betty I get it, great explanation - but what the heck is an electronic (electric) kitchen knife? We don't sacrifice turkeys here in Canada.

My initial comment was totally wrong. I had misinterpreted stylets to mean the serrations (would you believe I was trained as an entomologist? No, OK).
So, those serrations (little barbs) have the cutting edge on the inside, why?
NU.
student of entomology
Quote – Holmes on ‘Entomology’
” I suppose you are an entomologist ? “
” Not quite so ambitious as that, sir. I should like to put my eyes on the individual entitled to that name.
No man can be truly called an entomologist,
sir; the subject is too vast for any single human intelligence to grasp.”
Oliver Wendell Holmes, Sr
The Poet at the Breakfast Table.

I think I follow that, but let's see. As I imagine the process...

The bee starts by essentially stabbing one or both stylets a short distance into the victim, probably just far enough to get the first barb or two into the skin. This is done in a single stroke, little or no sawing motion, just relying on the sharp end and adjacent cutting edge of the stylet to penetrate the surface.

Once a barb or two have entered the skin, the process changes to something more like a ratchet. Using the big muscles in the abdomen, the bee pushes forward on one stylet while pulling back on the other. The one being pulled back can't actually move very far, because of the barbs. But the one being pushed forward can move easily because of its cutting tip. So it does. When that stylet reaches the limit of its motion, the bee reverses its force so as to pull back on the advanced stylet, while pushing forward the other one. Again, the advanced stylet is held in place by its barbs, while the other one moves forward easily, cutting as it goes.

Left, right, left, right, and a few tens of steps later, the stinger has worked itself in far enough for all practical purposes. If it's me that's being stung, the whole process is probably over before my nerves even have time to conduct a warning signal to the nearest reflex arc.

From what I can see of the shapes, the main cutting action will occur only near the tip of each stylet, on its end and its outer edge before the first barb. After that, I suspect the stylet just wedges its way in, like a plant thorn would.

In contrast, the carving knife model would cut all along its outside edge, and the reciprocating motion would mostly serve to help cutting sideways, not to aid lengthwise penetration by ratcheting with the barbs.

Both the anatomy and the process are described in considerable structure in David Cushman's The structure of the Honey Bee's Sting. It is the first of many hits found by Googling for bee stinger anatomy .

I don't know what is the "correct" English terminology. Cushman refers to the reciprocating cutters as "lancets", while the fixed portion is the "stylet". But my regular dictionaries say that "lancet" means a blade with two cutting edges, such as used to poke holes for blood sampling. I think we must have here another case where a word means something different as a technical term than it does in common usage.

I hope the image police are busy elsewhere.

Why do the serrations have the fine sharp cutting edge on the inside of the barb? 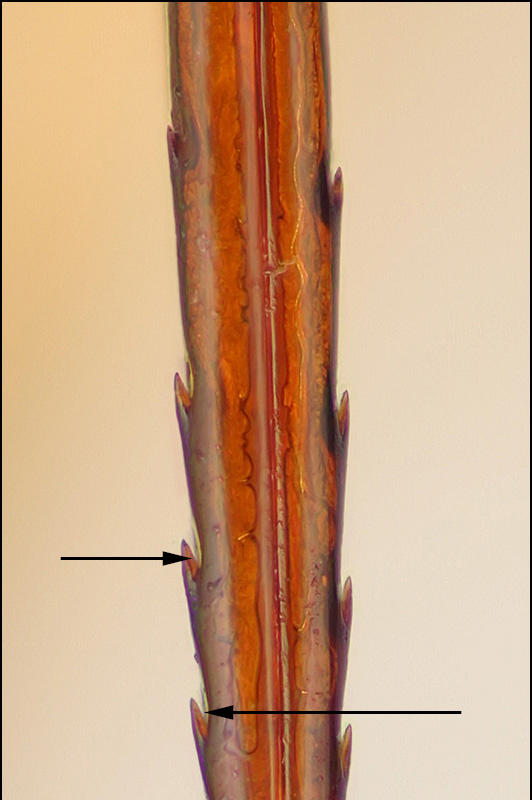 They're here, but no offense taken. You know how I like discussing stuff like this, and the repost is helpful to the discussion.


Why do the serrations have the fine sharp cutting edge on the inside of the barb?

I'm not sure, but I think that knife-edge appearance is an illusion caused by a quirk of the lighting.

In the scanning electron microscope image shown HERE, the barbs appear to have more of a broad base and a flat face on the catching side.

Of course scanning electron micrographs can be misleading themselves.

I would go take a nice long interactive look, flying the lights around, but I am traveling right now and the slide is about half a continent away.

Perhaps someone else knows the answer, or has links to more definitive pictures?