Portrait of a male mayfly

Portrait of a male mayfly 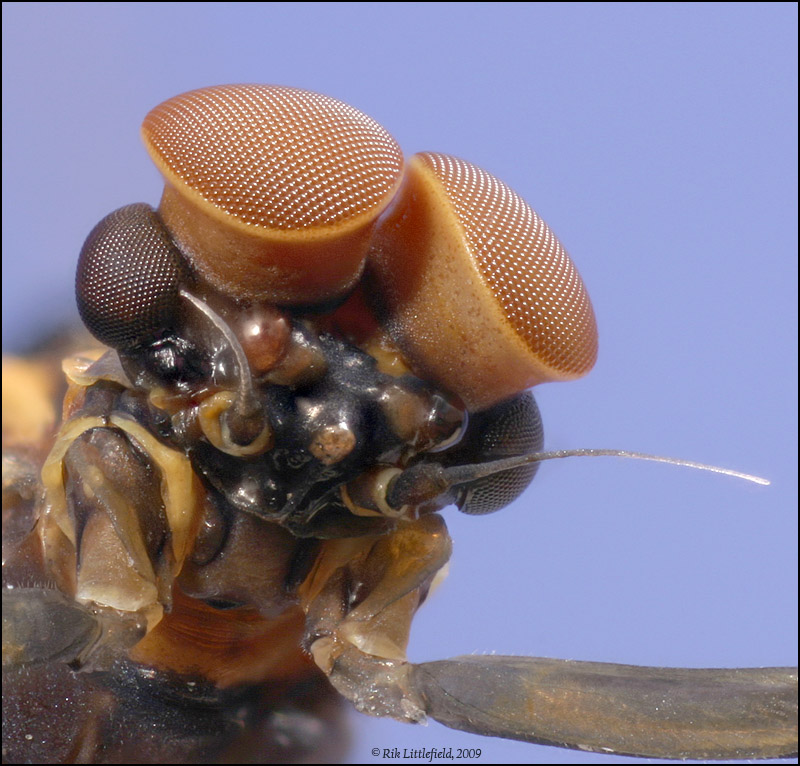 In previous years, I have seen this type of eye only on very small mayflies, such as the ones shown HERE.

But this week we had a hatch of some much larger species, body length around 7 mm. This is one of them.

The stack is 69 frames at 0.001" focus step, shot with an Olympus 38 mm f/2.8 bellows macro lens set at f/4, on maximum extension of an Olympus bellows. Magnification on sensor about 7X; the frame width shown here is about 1.7 mm.

Illumination was through a Kleenex tissue diffuser, using both heads of a dual fiber bundle from a halogen illuminator, adjusting the head positions and distances from the diffuser to get good modeling and highlights.

Processed with Zerene Stacker using a combination of DMap and PMax as outlined in the retouching tutorial of the ZS documentation. The resulting image retains the contrast and tone of the original frames, while avoiding halos and capturing detail even in low contrast areas. I also fixed up one visibility problem, where the rear antenna appeared transparent around the eye. Total retouching time in ZS, about 10 minutes.

Wow. Now that is a very interesting photo!!

I can't say which bits I like because I have no idea which bits are which!!!

It's a compliment by the way.
Top

Now that's a great angle to show off the array of optics on that beastie!
Flickr | www.laurieknight.net | Blog
Top

Thanks for the kind words, folks.

Aynia, I don't know what most of the bits are either! I understand about the upper and lower sections of the compound eyes, and I can identify the antennae, but most of the rest of this critter's kit is just beyond my knowledge.

I'd be very interested to hear from our entomologists, what are the two shiny globular structures between the antenna bases and the upper section of the compound eye? Those can be more obviously seen in the earlier pictures of the other species, HERE.

Laurie, I chose the angle based on inspiration from some of your work!

By the way, there's more to the story that you can't see in this photo.

I tried several times to get a stack-and-release portrait of this fellow, keeping him confined in a small container made of microscope slides. But I just couldn't make it work. Three or four frames and then he'd tilt his head a little and the perspective would change. No way to fix it in postprocessing.

I tried CO2 anesthetic, no effect.

Finally I gave up and resorted to freezing.

Having a dead specimen also gave me an opportunity to finish cleaning it, removing several chunks of debris that had been stuck to its eyes. Some of those dislodged under pressure from a single hair of an artist's paintbrush. Some required more encouragement, using the tip of an entomologist's minuten pin. One refused to give up until stroked with a wet swab made by cutting a piece of balsa wood to a sharp end. All this was done under a stereo scope, working from 20-45X.

By the way, I updated the posted image with a slighter lighter version. It makes the catchlights blow out a little more, but I think it's easier to see all that interesting detail in the darker parts.

Great shot! These guys are so bizarre. I think the shiny bumps between the antennae and upper eyes are ocelli, but I could be wrong. No mouth parts is pretty weird too.......reminds me of a Twilight Zone episode.
"You can't build a time machine without weird optics"
Steve Valley - Albany, Oregon
Top
Post Reply Previous topicNext topic
6 posts • Page 1 of 1