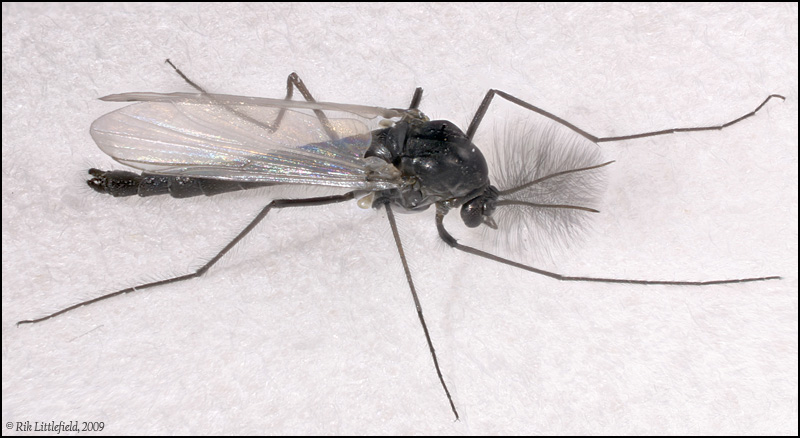 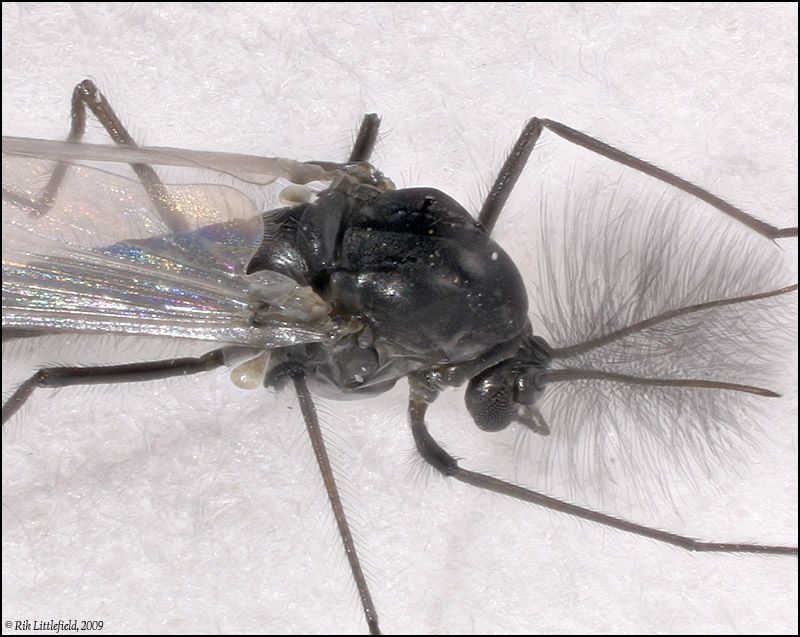 I was testing out some new software this morning and this little gnat sitting (dead) on a Kleenex tissue made a handy subject.

I kind of liked the looks of it, so here it is!

The second one is just a crop of the first.

The gnat's body length is 4 mm.

To use a classic quote from 'Antz' - "I almost know exactly what I'm doing!"
Top

Nice shot Rik but is it a gnat? Don't the feathery antennae mean this is one of the chironomids?
Flickr | www.laurieknight.net | Blog
Top

"Don't the feathery antennae mean this is one of the chironomids?"

You caught me speaking the regional language of my youth. We had biting gnats, harmless gnats, and Midge was the lady who lived three houses down.

Now I'm looking in How to Know the Insects. I'm finding "biting midges", just plain "midges", "gall midges", several groups of "gnats", and not a smidgen of information about why some are called one and some are called the other. By the book, this would be a (just plain) midge.

But yeah, Diptera:Chironomidae ... unless I'm wrong about the ID!

Gnat or Midge? now you're getting technical.

Wasn't that lady who lived down the street Madge rather than Midge?

Those plumose antennae with crisscrossing hairs and not a halo in sight; and the row of hairs on the middle leg - no halos. That's got to be some real good stacking software. I would not want to try this stack with HF.
NU.
student of entomology
Quote – Holmes on ‘Entomology’
” I suppose you are an entomologist ? “
” Not quite so ambitious as that, sir. I should like to put my eyes on the individual entitled to that name.
No man can be truly called an entomologist,
sir; the subject is too vast for any single human intelligence to grasp.”
Oliver Wendell Holmes, Sr
The Poet at the Breakfast Table.

NikonUser wrote:Wasn't that lady who lived down the street Madge rather than Midge?

I'm pretty sure it was "Midge". I remember being surprised the first time I heard "Madge", it sounded so strange. Still does, actually. But I don't know the origin of the name and I never saw it written down. Could have been a odd pronunciation, or perhaps a nickname like "midget".


Those plumose antennae with crisscrossing hairs and not a halo in sight; and the row of hairs on the middle leg - no halos. That's got to be some real good stacking software. I would not want to try this stack with HF.

True, HF has trouble with this one. The combination of low contrast and overlapping structure is difficult for depth map algorithms. CombineZP's pyramid max method actually works pretty well on this stack. The image shown here was generated using Zerene Stacker's "PMax". It's a pyramid method, similar to CombineZP's at this level of detail. Generally works quite well with hairy subjects.


My god look at the antennae on that thing!

Neat, aren't they? The cool thing is that when the critter wants to, it can fold up those antennae almost like a stack of umbrellas. All those strands that are pointing to the side as shown here apparently pivot at the base so as to point forward along the main shaft. In that configuration, the antennae look thick and solid even under 10X magnification. When I first saw this critter sitting in a window, I didn't know what it was. I had a few minutes to study the closed antennae under a stereo scope, but before I could set up to photograph them, they popped out into the more conventional fluffy set that you see here.