At least I think it was part of a brown lacewing. 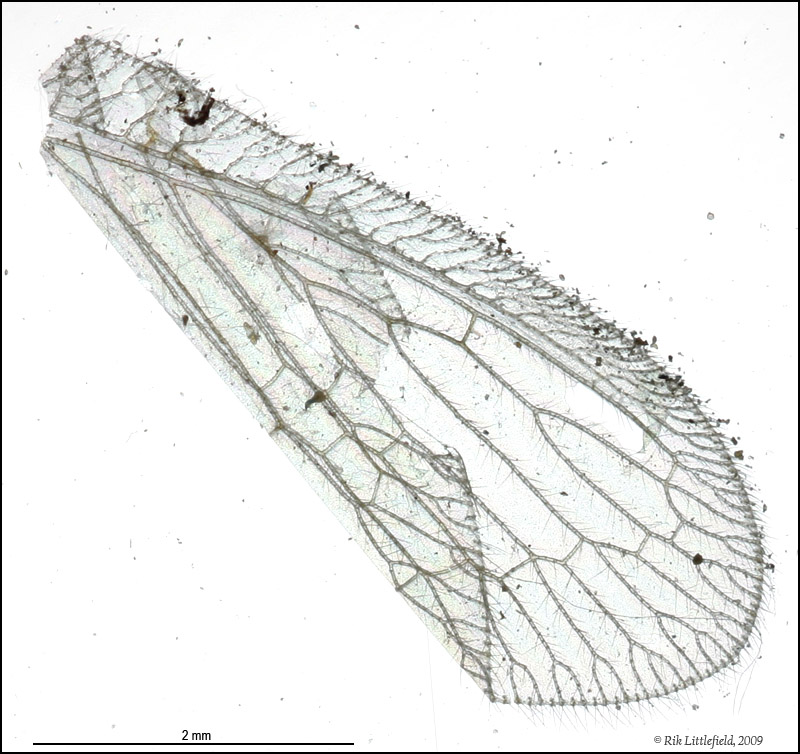 I debated putting this one over in Nature Photography, just because I could make a case for it.

Of course you'd ordinarily see this sort of image here in Technical and Studio.

But honest-to-gosh, this one really does fit under "Images of undisturbed subjects in their natural environment". 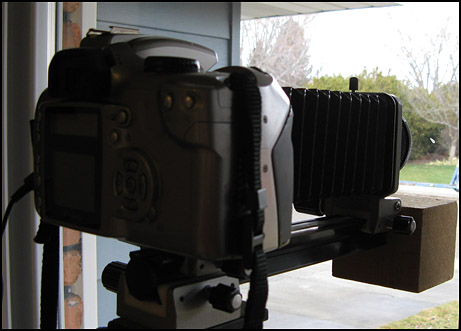 Yep, sure enough, photographed using natural light, in situ, right where I found it --- stuck to the outside of a window!

I'm presuming that once upon a time this was part of a spider's meal, and now the wing is all that's left, flattened by weather against the glass.

Technical: Canon 300D camera, 80 mm Olympus bellows lens at f/8, 1/10 second, one frame. Photographed through two panes of glass. The block of wood braces the front of the bellows rack against the window. Otherwise the bellows was overhung so far that tripod vibrations were like a flagpole swinging in the breeze.
Top

What's that cube shaped thing that looks like a sponge floating in front of the camera?
Top

That's the "block of wood" mentioned in the fine print. It's there to stabilize the front of the bellows against the window. With it, rock solid. Without it, impossible even with mirror lockup.

Nice brightfield system you have there! Good capture!

Interesting image Rik and good detail too considering it was taken through a double glazed window.

It looks to me as if the bottom edge of the wing (as we look at it) has been folded over. If I'm right and you mentally unfold it, the result is a relatively fat wing that would fit quite well with your Brown Lacewing id .....and of course the venation looks about right too.

Cyberspider wrote: Something I'm not sure: Should I buy a bellows or should I buy he M-PE 65? A bellows would be cheaper

You mainly shoot outdoors don't you? I don't have an MPE (Olympus shooter) but I believe the MPE would be easier to use than a bellows in the field, and be less prone to harm (Bellows can be punctured!).

Although on the other hand, a bellows is more versatile as you can achieve a vast range of magnifications with a range of focal length lenses... (though to be honest going beyond 5:1 in the field is pretty masochistic!)
Flickr | www.laurieknight.net | Blog
Top

rjlittlefield wrote:That's the "block of wood" mentioned in the fine print. It's there to stabilize the front of the bellows against the window. With it, rock solid. Without it, impossible even with mirror lockup.

Fine print should only be used in legal documents

Cyclops: Well, it was just sitting there, and this crazy idea came to me...

Laurie: "Brightfield"...hhmmm...suppose I should try a "darkfield" shot too?

Bruce: I was pleasantly surprised by the lack of problems shooting through the window. There must be some softening and loss of contrast. But even at actual pixels, the image looks pretty good in Photoshop. About the folding, I agree. I tried "virtually unfolding" the wing using Photoshop layers to do the mirror & align, then manually cloned out the duplicated veins. Here's what appeared. 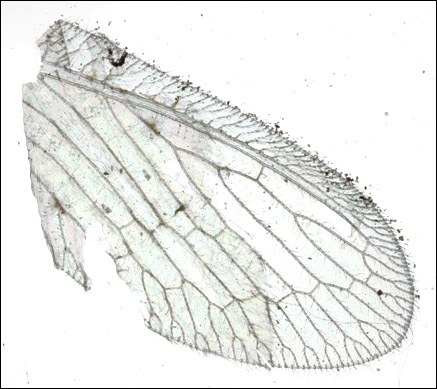 Cyberspider: For studio work, bellows are better because you have more options. For field work, it seems like the MP-E 65 would have huge advantages. Bellows are fragile and fiddly, and something usually moves when you stop down to shoot. I don't own an MP-E 65, by the way. At this point, I can't imagine myself shooting enough high magnification in the field to justify the expense. But the high-mag field folks do seem to like it.

elf: Ah yes, the perils of "fine print". Some of us would argue it should be outlawed in legal documents too! But I suppose then all that would happen is they'd get bigger.