Most folks out west are familiar with tumbleweed, also known as Russian Thistle or Salsola.

It's the roughly spherical hunk 'o dry brown stuff that blows around, piles up against fences and houses, and clutters up irrigation canals.

But of course it's not always brown and blowing around. It does have to grow sometime, and when it does, it's actually green...and a few other colors.

Here are some different views of the plant, and a couple of the critters that live on it.

The flowers are pretty small. They vary from greenish to pink. This is a particularly showy specimen. 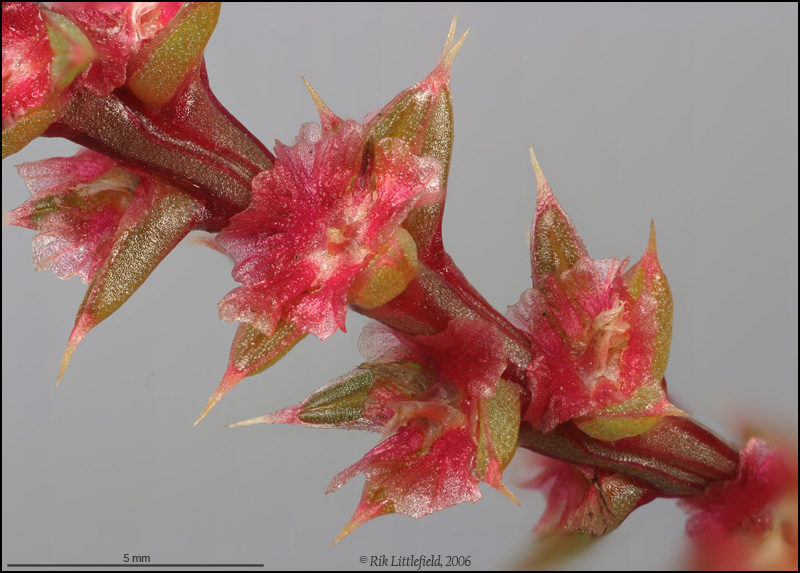 Yep, the stems are striped! The light tan "candles" are actually the case of a small moth caterpillar. They move around from day to day. A few years ago, I kept some to see what would come out. Mostly little tan moths, plus a few wasps. Everything has its parasites, I guess. 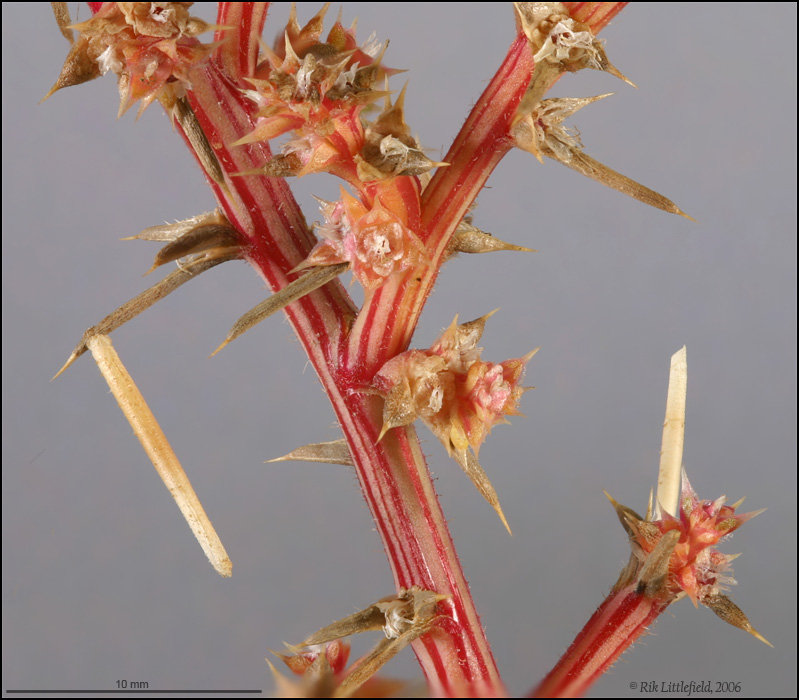 Even aphids go after these things, once a while anyway! 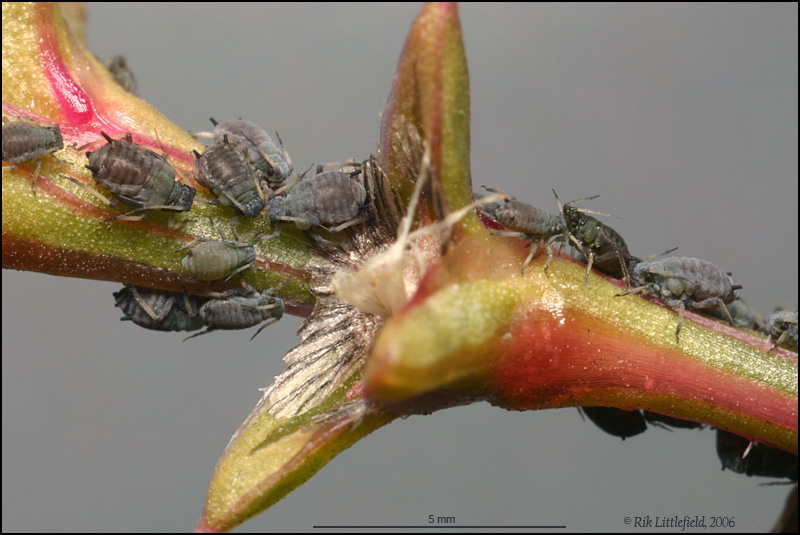 Hope this prompts a closer look next time!

I never have had the pleaure of having to mess with these plants and I don't think that I personally have ever seen one in my travels but then again I might have. I always imagined them, like you said, just a dry ball of brush blowing around. Maybe that is how they are spread, the dry round bush rolling around and dropping its seeds.

I would have never known tumbleweed had a beautiful side. I have seen them in movies but never for real and I would have never expected them to have such nice colors. Thank you Rik, wonderful pictures and info

. One question...is it an annual plant, re-seeding itself every year?
Take Nothing but Pictures--Leave Nothing but Footprints.
Doug Breda
Top

Thanks, Doug & Ken. Yep, they're annual, and the blowing-around definitely does seed dispersal. They are prolific seed producers -- see abstract below.

By the way, there are several species of Salsola, and I haven't tried to figure out exactly which one this is. (Heck, I might have two kinds, or it might not even be a Salsola at all, though I think the odds are good.) At various reliable looking web sites, I've seen references to Salsola tragus, S. iberica, and S. kali, all called "Russian thistle" and described as covering large sections of the west.

In perusing the web, perhaps the most interesting site that I found was http://pnwsteep.wsu.edu/tillagehandbook ... 051799.htm. It seems to come from a research program joint between Oregon State University, Washington State University, and University of Idaho, and it addresses the potential use (note positive sense) of Russian thistle for erosion control in wheat fields. I suspect this is along the lines of "Well, we can't get rid of it. Can we find something it's good for?" But in any case, the article has some interesting stats on the plant's biology.

ABSTRACT
Russian thistle (Salsola iberica Sennen and Pau) is a major broadleaf weed in dryland crops (less than 12 inch annual precipitation) in the Pacific Northwest of the USA. Russian thistle frequently infests wheat (Triticum aestivum L.) and other spring-sown crops, especially during drought. Quantitative information on water use, biomass accumulation, and seed production of Russian thistle after wheat harvest is lacking. In a 2-yr field study at Lind, Washington, Russian thistle plants were allowed to grow yearly in spring wheat in a grid pattern without competition from other weeds. Individual Russian thistle plants used 20 gallons of soil water while growing with the crop. From wheat harvest in early August until killing frost in late October, each Russian thistle used an additional 27 gallons of soil water. Water use occurred within a 5-ft radius of the Russian thistle. Spring wheat competed with Russian thistle for water at shallow soil depths; most water use by Russian thistle was from deeper than 1.0 m. Russian thistle dry weight increased from 0.4 to 2.8 lbs per plant between grain harvest and killing frost. Russian thistle seeds were either not produced or germinable until mid-September. By late October, individual plants had produced 67,000 and 25,000 seeds in 1996 and 1997, respectively. Water recharge into the soil was reduced near Russian thistle after a winter of high precipitation where water infiltration occurred to depths greater than 3 ft, but was not affected the next year when winter precipitation was close to the long-term average. In low crop residue situations, rapid post-harvest growth by Russian thistle (before seed production) provides valuable surface cover for erosion control, but with the prospect that soil water may be reduced for the subsequent crop.