My first intention was to capture the flower... but... suddenly this bee came into the cadre.

Half bee, half flower. 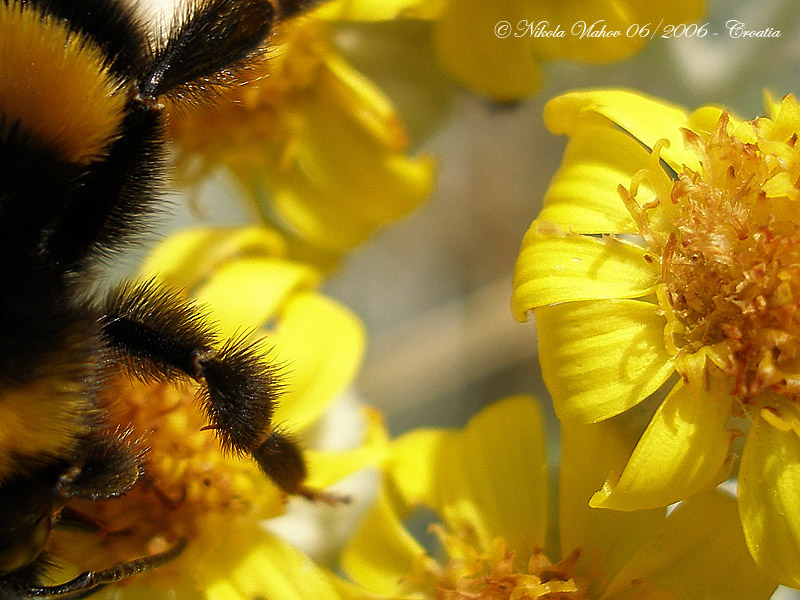 Glad that you mentioned that it was a bee. Tarantula would have been my first guess.

Quite a vivid and colorful photograph there Nikola, thanks

I wish my camera took razor sharp images...when I read the reviews on my canon, they did state that the pictures are a little soft. My deciding factor on buying it was the fact that it takes 640x480 30 frames per sec. video which come out very nice.
Take Nothing but Pictures--Leave Nothing but Footprints.
Doug Breda
Top

beetleman wrote:... I wish my camera took razor sharp images...when I read the reviews on my canon, they did state that the pictures are a little soft. My deciding factor on buying it was the fact that it takes 640x480 30 frames per sec. video which come out very nice.

Generally, sharpness is a problem in digital photography.
The nasty truth underlying all digital recording techniques is that they turn analog signals into discrete samples of the original. CD players, for example, sample sounds at 44 kilohertz (i.e., 44 thousand times a second) and record each sample using 16 bits of data. The frequency of digital sampling and the amount of data sampled determine how well the analog original can be reproduced. The coarser the sampling, the less the digital recording is like the original.
State of the art consumer digital cameras have a sampling frequency of 4500 by 3000 pixels (or even more), with the amount of data recorded being 12 bits for each of the red, green, and blue colors. These numbers are actually relatively crude compared to the analog reality, where detail and color variations are nearly infinite. The real world sports an infinite number of shades of blue in the sky and an endless amount of detail, but your digital camera only captures between 1000 and 4500 or more pixels of horizontal detail in perhaps thousands of shades of possible blues. While that’s pretty darn good, it does cause two resolution-oriented problems:
1. Detail smaller than the pixel size is usually lost.
2. Where transitions between details occur within the area of a single pixel, the transition usually results in a digital value that is neither of the original values.
This second problem is what makes details in your photographs look fuzzy. The classic example is that of a diagonal transition line that transects a pixel. The pixel can either be white, black, or some in between value. If the camera were to render the pixel as entirely white or black, then you’d see an artifact known as the stairstep, so named because a diagonal line gets rendered as a series of pixel blocks that resemble a set of two-dimensional stairs. The alternative is to record the pixel as an "in-between" gray (which still produces a bit of a stairstep effect, but isn't quite as obvious). Neither case is correct, and both tend to reduce apparent sharpness.
All digital cameras use in-camera interpolation to detect edge transitions, and use some form of digital sampling to create “in-between” values for those diagonal lines. The result? Instead of a precise transition from one pixel value to another, diagonal details (and sometimes small horizontal and vertical details) are rendered as a more gradual transition from one color to another. Our brains have been programmed to see blurry or soft edges as being out-of-focus, thus unmodified digital photographs always tend to look just a tad soft. That’s even true of higher resolution cameras and scanners—film images if you’ve had scanned on 4000 dpi drum scanners still look a little soft in the detail areas.
Worse still, most digital cameras employ what is known as an anti-aliasing filter--essentially a diffusion filter over the sensor. Why? Because the Bayer pattern sampling used in digital cameras has a tendency to produce colored artifacts and moire patterns on small detail. By blurring the light slightly so that multiple photosites get some of the information from a particular detail, this lessens the chance that these hard-to-remove artifacts appear. Unfortunately, it also has a further tendency to make edges less distinct.
I'm not that clever, I only transmit you what I've read about this problem.

Doug, I think you can adjust sharpness via your camera menu (3 steps).
Your camera is very nice.

It has image stabilization that works really well (and can be used in movie mode!) and it is very quiet, fast and responsive, with stunning movie mode with high quality sound and very good continuous (burst) shooting.
My first digital camera was Olympus C-700 UZ. I loved it so much that I'm considering now to buy it's successor Olympus SP-510 UZ.
The meaning of beauty is in sharing with others.

You have given an excellent list of the potential problems with digital sensors, but I will argue that these problems are more theoretical than practical.

As a matter of practice, I find three difficulties in photomacrography:

1. Optical image sharpness delivered to the sensor -- either digital or film.
2. Sensitivity and sensor noise -- either film grain or digital.
3. Dynamic range -- the maximum & minimum light levels that either "blow out" or "go black".

Notice that I have not listed "pixelation" and "Bayer filter effects". That's because (in my experience, with most lenses) they stopped being issues someplace around 3 megapixels. At any sensor resolution higher than that, it's pretty challenging for a lens system to deliver more detail than the sensor can capture.

I've had a bunch of lenses on the front of my Canon 300D, and it's obvious that almost all of the images are less sharp than the best. What that tells me is that the camera's 6.3 megapixel sensor is capable of capturing the difference, which means the limit is the lens, not the sensor.

If I'm reading the reviews correctly, Doug's Powershot S1 is blessed with a 10:1 optical zoom. That makes it an extremely convenient and flexible device. It sure beats any single lens that I have. But that convenience comes at a cost, and that cost is almost certainly optical sharpness. So I'm not surprised to hear that its images are a bit less than perfectly clear. Add a closeup lens, I'm even less surprised. Shoot extreme macro, with the associated shallow DOF, and...

Bottom line, I'm afraid it is a "red herring" (a distraction) to worry about the effects of digital sensors on the sharpness of our macro work. If we feel compelled to worry about anything, it should be the lenses and the lighting -- and the composition, and the DOF, and getting the focus placed correctly, and picking a good subject in the first place, and... The list goes on and on!

Just some thoughts, for what they are worth...

This was my first Digital camera. when I was looking to buy, my limit was $500. I am not sure if I was looking at this forum at the time or it would probably have influenced my decision. The two cameras (for general family use) I was looking at at the time was one of the Nikon coolpics, I can`t remember which (4500 or 4700) I know it was almost $500 and this one. The Nikon had a nice macro mode and a close focus of .7" only 3x optical and people were using them on their microscopes and not that good video mode. The Canon had 10X optical, has the IS (very nice) very good video mode and was around $150 less and with that extra savings I bought an underwater housing for it from Canon for $199 (very cool). I also found out in some reviews, this Canon is NOT good for microscope use because of the zoom lens system. I guess I`m just whining, now that I am a member of the forums "I WANT IT ALL--BIGGER> BETTER> FASTER!!

Sounds to me like you made an excellent choice for what you wanted to do.

This "BIGGER>BETTER" thing has traps of its own.

I look around at some of the best pictures in the forum, and in my mind I start assembling the "perfect" macro system: a 12-megapixel DSLR with a Sigma 150 lens plus optional tubes, TC's, and maybe a reversed 50 on front, flanked by a pair of high-output flash units covered by softboxes, the whole affair mounted on a tripod with a micro-rotation head and a focusing rail. Very impressive, takes awesome pictures -- but it's about as maneuverable as a typical mini-van, which by the way is what it may take to get the gear to where the subjects are!

), and I figure that no, I'm wrong, the "perfect" system must actually be a tiny autofocus camera with built-in macro mode -- just the thing for getting "up close and personal" in the middle of a bush!

Different tools for different jobs, I guess, and it's what you do with them that counts?

In any event, I get great pleasure and learn a lot from the wonderful pictures all you folks take, and the descriptions of how you took them, and the discussions of what it is you took. Whatever the equipment, keep shooting and posting!

You are 110% right Rik. I have seen a 100% improvment in most of my photos because of Things I have learned from you & Nikola, and all the other great photographers on this site. I also have to remember that a camera is nothing, it is the person behind the lens that matters the most. OK I`m all through with my whining...I feel better now

Hey folks! Seems like you promoted me as "great photographer"

Thanks a lot Rik. You obviously studied this problem more deeply and what is more important also in practice.
And Doug, I really think you made a good choice buying this camera with well balanced possibilities at given time. Every camera has "pros" and "cons". You know well how to exploit "pros" and sometimes even "cons"

. I've made something similar when I bought my first Olympus C-700 UZ. And one important thing is that I'm happy with my litttle camera and I know roughly what I can and what I can not expect from it. Hmmm... with appearance of a little Olympus E-400, this is a first time I'm seriously considering about DSLR.