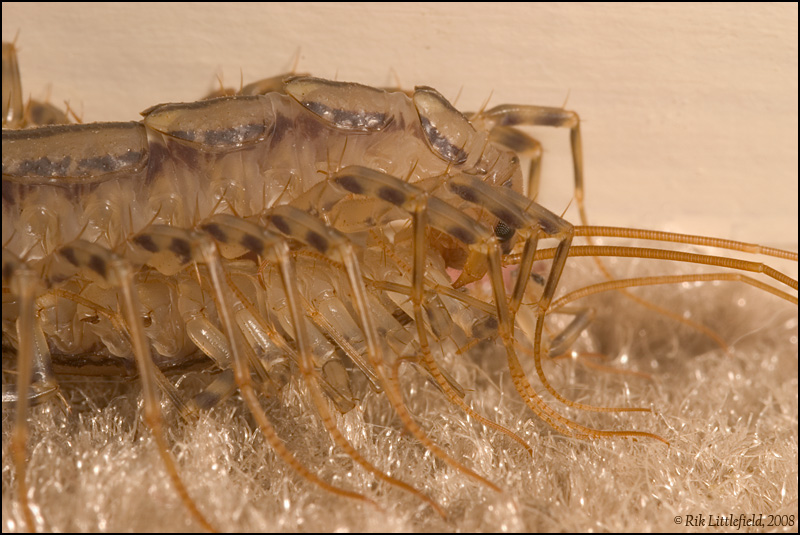 "Horror of Greenvale", it says!

The House centipede, Scutigera coleoptrata, also known as the horror of Greenvale, is a yellowish grey centipede with 15 pairs of legs. Originally endemic to the Mediterranean region, the species has spread to other parts of the world, where it usually lives in human homes. It is an insectivore; it kills and eats insects.

The confusing tangle of appendages in the above picture is caused by an aspect not mentioned in the Wikipedia article -- these critters are also opportunistic cannibals.

A couple of more pictures may make the situation more clear. 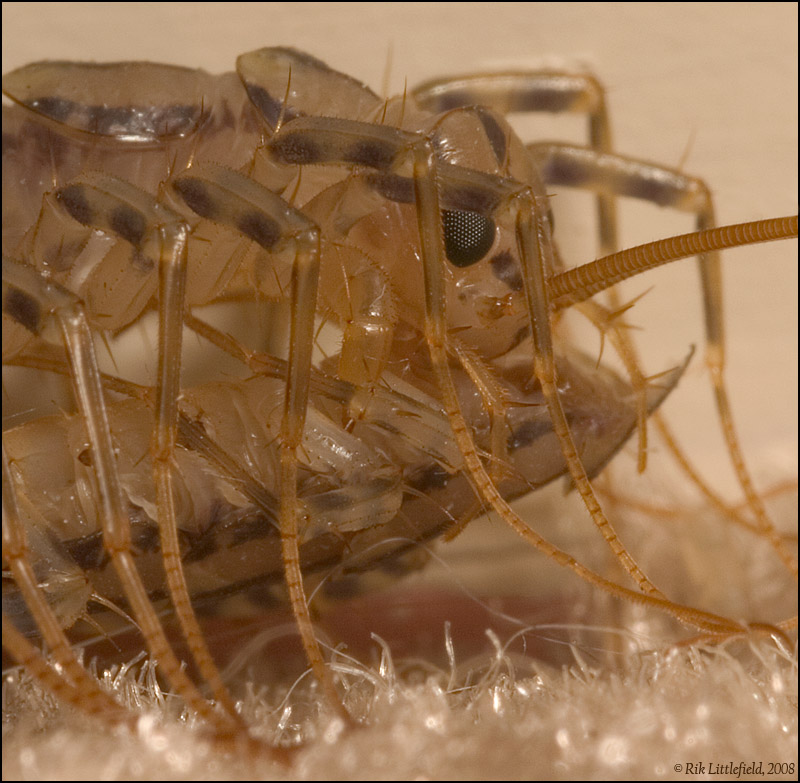 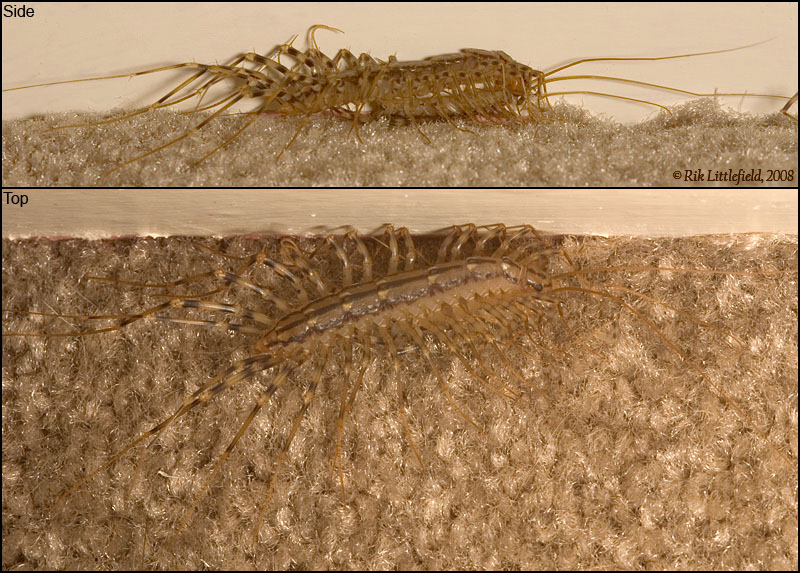 What we're looking at is one large centipede that has captured and is quietly eating a smaller member of its own species.

The larger one is about 30 mm body length and 100 mm total length including extended antennae and rear legs. The smaller one, underneath and upside down, is about half that size.

I had never seen or even known about these beasts until a couple of weeks into this trip, when I found a dead one in a basement in Nebraska. Then I found a live one outside after dark at the same place, but it was way too fast too get a picture of it. (The Wikipedia article says that they can run up to 16 inches per second, a number I find easy to believe.)

The live one shown above, however, seemed far too busy eating to worry about me and my camera equipment. I found it on some carpeted stairs in a basement near Minneapolis, and it sat happily munching away while I shot a good series.

PS. Don't take that "horror of Greenvale" stuff seriously. According to Google just now, this one Wikipedia article is the only place on the entire web that uses that phrase for anything at all. It's intended to be amusing, I suppose, but it's not appropriate given the source. I imagine it'll be fixed soon...

BTW, it seems that "horror of Greenvale" thing at Wikipedia was actually a little piece of vandalism installed yesterday by some anonymous keyboarder. I undid it out of Wikipedia a few minutes ago.

Da mn I hate centipede, too many legs... I'm not scared of them or anything but the sight of them makes me want to reach for the insect spray. I know my girlfriend would be high up on my back by the time that centipede covered one inch distance.

Those are disturbingly detailed photos you took there Rik, and thanks for the bit of info provided.
Top

If one of those things got on me, I would throw a "kiniption fit!"

Don't ask me what that is or even if I spelled it right, just something we used to say in the Navy.

Could be a clue to my arachniphobia, all those long legs.

Love the detail in these, very nice!

I was just contemplating the length of the legs in the second picture when I saw the word "basement". I looks like a cave/cellar species and would probaly have problems getting around in soil or any by surface leaf litter.

Great find, Rik! Didn´t know that "our" Scutigera had been introduced to North America, and then is occuring as far north as Minneapolis.

It´s rare in Central Europe, does occur in Germany in some of the warmest areas but can be regularly encountered in the Mediterranean, where it´s oftentimes a not unwanted guest in houses due to its fly-catching abilities.

I have to confess that watching this critter run probably made me more uncomfortable than anything else its size ever has.

I'm used to the short-legged versions, but somehow making the legs about ten times longer gives an entirely different impression!

Add in the fact that a few weeks ago, I happened to read a science-fiction short story involving a micro-safari gone bad when the (shrunken) human protagonists tackled the wrong centipede.

(Kind of a nice change, actually. Most of my disturbing dreams involve suddenly discovering that I'm late for the final exam of a course I hadn't even known I was taking.

I wish I had some video of this critter to show you. They have the most interesting habit of carrying their very long hind legs extended and elevated almost like antennae. I have no idea what the purpose is.

They have the most interesting habit of carrying their very long hind legs extended and elevated almost like antennae. I have no idea what the purpose is.

- so they don't trip over their feet, of course!
Graham

With those hind legs being as long as they are, I wonder if they might be used for jumping or standing.

Ken, I think you might be right about the "standing". At one point I moved the critter and its prey into a plastic container, so I could keep track of it for a while. I don't have any pictures of it there*, but as I recall it was reaching quite a long ways up on the sides -- about as far as extending those hind legs would have put it.

*And why don't I have any pictures? Well, because when I started to take some (the next morning), I made the mistake of taking my eyes off the critter to set the camera. When I looked back, no centipede! I can only presume that I tipped the container a little bit and it found enough foothold to scoot out over the side. I never saw it again -- no surprise considering how fast they run!