Still-life on a tree stump

Still-life on a tree stump 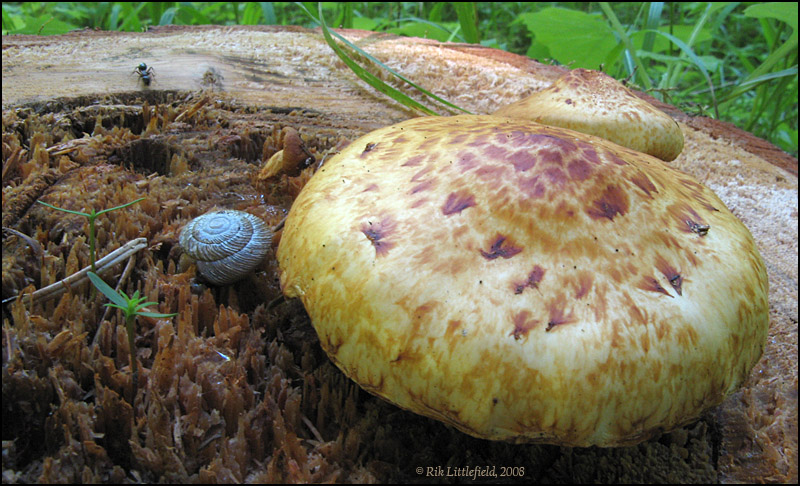 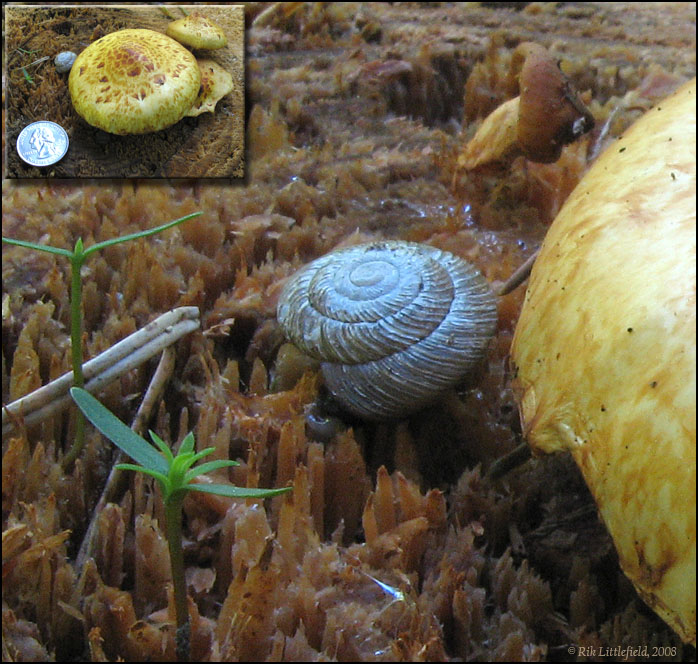 Dense shade, in a picnic area high in the mountains of Idaho. The tree appears to have been freshly cut, but apparently the core was rotten to start with. (Probably the reason they took it down.)

in a picnic area high in the mountains of Idaho

Aha Rik, there you are!

I best like the ant (of course!) in the upper left corner of the first pic.

Wishing you a nice time there!
And BTW, I´d be looking forward to seeing landscape photos of these Idaho mountains over in the 'favourite locations' department!

i like the shot with the coin in it
Top

I really like the perspective on the first shot.

The ant reminds me of the tourists who come here, ignoring the safety margins and look over the edge of a cliff on a mountain side. Opps!

The big mushroom was the first thing that caught my attention. Then when I looked closer, I saw how much more there was going on in this little scene. The snail is dead, I think, just judging from the way it's kind of lying on its side. Everything else seems very much alive, especially the ant that showed up midway through shooting.

Adrian, when I shot the coin I was intending it to be just a record shot, so I would know the scale. But after I saw it on screen, I decided it was interesting enough to include in the posting. Besides, when used as an inset, it covered up some annoying OOF blobs in the upper corner of that second picture. Glad you liked it!

Beautiful shot, Rik! I like such still life images. So much to be discovered.

BTW - the DOF of those P&S cameras always amazes me. Almost impossible with a DSLR and a conventional Macro lens in a one-shot solution.

Those Pholiota mushrooms are very decorative.

Thanks for the compliment and the ID on the mushroom -- most appreciated!

Regarding DOF, well, that always makes a complicated discussion. Bottom line is that a DSLR actually can get the same DOF as a compact digital, but the settings to do it will be very different -- more like f/32 instead of the f/8 used here. There's been a lot written in the forums on this issue, but I don't have the references handy. I can track them down later if you're interested.

rjlittlefield wrote:more like f/32 instead of the f/8 used here.

Rik, I know, but at f/32 you usually exceed the diffraction limit by a long way. I have only one lens which is able to do f/32 without any serious signs of diffraction: the Micro-Nikkor 85/2.8 PC. All other lenses start having problems beyond f/11-16. Well, not necessarly at web size

No, it all scales. The smaller sensor suffers the same diffraction effects at f/8 as the DSLR does at f/32. That's why the A710 and similar small-sensor cameras only go down to f/8. This topic has further discussion, but the first few postings may be confusing. A good place to start is with this post, part way through the topic.

A very neat image Rik, I like it.
Walt
Top