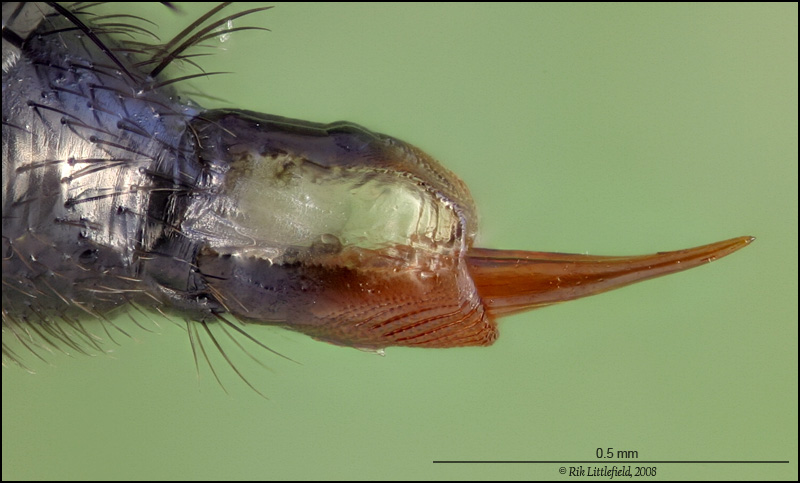 This is the business end of a Western Cherry Fruit Fly, Rhagoletis indifferens.

Or perhaps I should say the "anti-business end", since one of these things can easily cost a commercial orchardist tens of thousands of dollars.

It's the ovipositor. Fairly easy to see how the egg gets inside the cherry!

See http://www.ncw.wsu.edu/treefruit/cffartcl_000.htm for extensive discussion of this insect. In brief,

Even though they are rarely found in commercial orchards, cherry fruit fly is considered the primary insect pest of sweet cherries in the region. Quarantine agreements between the region and other states or countries result in a zero tolerance for cherry fruit fly larvae in packed fruit. Washington State Department of Agriculture inspectors are stationed at each cherry packing facility during the harvest season to check fruit for infestation as it comes to the packinghouse, prior to acceptance, and again after packing. Fruit may be inspected again prior to entering California. Fruit is rarely found to be infested. However, single larvae are found during inspections of over 100,000 tons of fruit produced in Washington State's 35,000 acres (14,000 hectares) of sweet cherries from one to ten times per season. When a larva is found, the entire load of infested fruit is rejected, and all other fruit from that grower is intensively inspected for signs of cherry fruit fly. It is quite rare that subsequent inspections of the "infested" fruit result in discovery of other larvae. 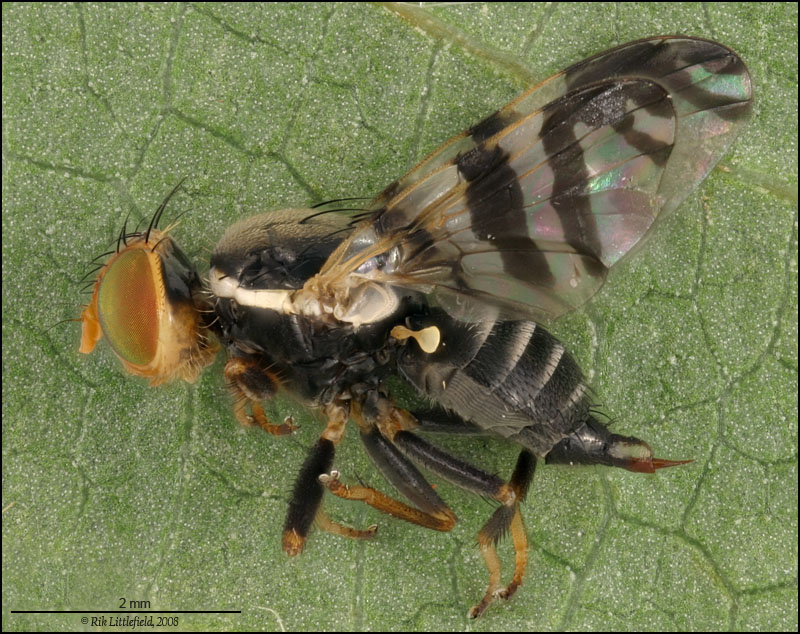 They're kind of randy little critters. Most of the individuals I see are males, apparently holding court waiting for a female to show up. If I pull several males into an aspirator, then pull in a female, it's typically only seconds before mating begins. 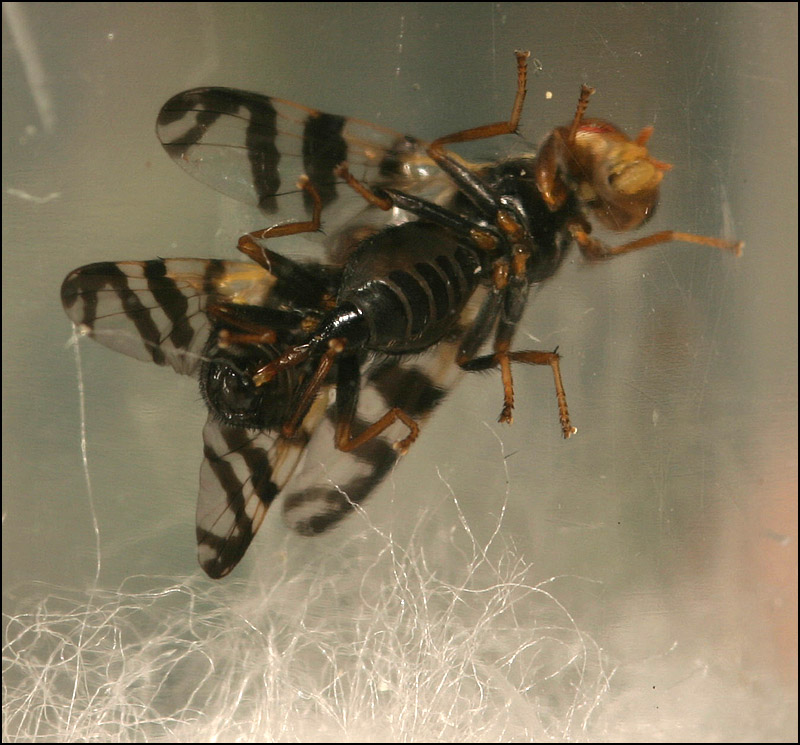 These are from a residential area, by the way, miles away from any commercial orchards. And these particular flies are doomed anyway, soon to be victims of residue from periodic sprayings that protect these trees from re-infestation so I can get a decent crop.

Technical: Canon 300D. Image #1 (ovipositor) is with Nikon CF N Plan Achro 10X NA 0.30 objective on 150 mm extension, 81 frames stacked at 0.0002" with CombineZP "Pyramid Maximum Contrast", cropped to about 50% of frame width. Image #2 (full fly) is with Olympus 38 mm bellows lens at f/4, 116 frames stacked at 0.002" with TuFuse Pro after registering with CombineZP, cropped to about 70% of frame width. (I tried doing this whole problem in CZP, but it crashed with no diagnostic.) Both #1 and #2 are with dual fiber halogen, using two layers of thin bubble-wrap for diffusion. Image #3 (mating pair) is with Sigma 105 mm and electronic flash, through wall of plastic vial, cropped to about 40% of field width.

Excellent photos and followup info on the importance of this fly Rik. Seeing the whole fly is great! Is that a translucent window on the ovipositor? So, the spike makes the hole and the egg passes through the upper section of the ovipositor and gets inserted into the hole? I just planted a sweet cherry here in zone 5 this year to see how it will grow. There was a few times when I was in the produce industry that I ate so many cherries to make myself sick

. Looks like the head would make a good stack also

Thanks, Doug. Yes, that's a translucent window. I have the same idea about how oviposition works. It seems like the egg would have to be way too small to fit down the center of that spike. I had originally intended to shoot the head, just because they're so pretty. But then I decided "Hey, why shoot just another pretty face? Let's go for something more interesting!"

Speaking of interesting, check out the left side of the picture where the bristles look like they come in V's of two from each base. I believe that's just an illusion and actually the cuticle surface is so smooth that it's acting like a mirror. First time I can recall seeing that. The second "bristle" in each V is certainly not a shadow, not given the angles involved and what I know the illumination was.

BTW, I took another look at this ovipositor mechanism, direct view under the microscope. I'm pretty sure that the sharp spike is deeply grooved along most of its upper surface. So most likely what happens is that the fly pushes the spike through the cherry skin, then pushes the egg down the groove while the spike holds the hole open. The groove doesn't go all the way to the end of the spike, but presumably it's longer than the cherry skin is thick.

So it seems I was too optimistic when I wrote "Fairly easy to see how the egg gets inside the cherry!" It's easy enough (I think!) to see how the fly pokes through the cherry skin, but the egg itself, well, that takes a little more investigation.

Rik, this is awesome, as most of your work! The amount of detail is stunning.

). But be prepared that when the time comes I will most likely have a few questions for you (and Charles)

Rik requested a confirmation for this pest fruit fly -- so I am pleased to confirm that it is indeed Rhagoletis indifferens, the Western Cherry Fruit Fly.

A wonderful series of photos Rik!

Thanks for the cross-check and the compliments, Eric!

The ovipositor (image #1) can now been seen in stereo HERE.