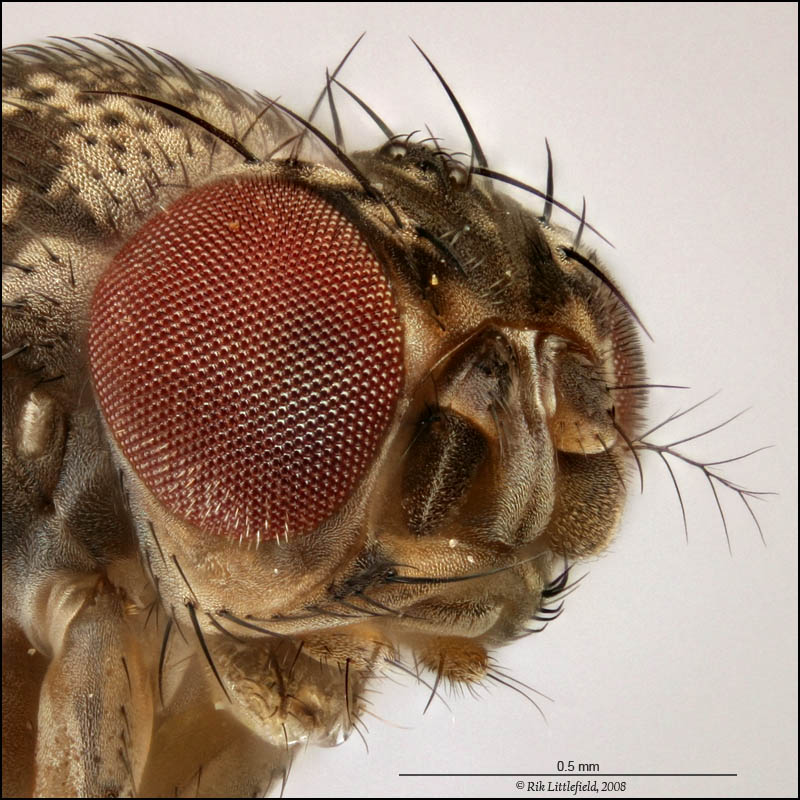 It's been a while since I've shot a high-mag stack, and I just couldn't stand to let you other folks have all the fun.

I don't know what kind of fruit fly this is. It's a bit larger than the usual Drosophila and is fairly dark -- gives an impression of gray/black rather than the usual brown with red eyes. But with good illumination it has quite a bit of interesting detail. Shown here definitely brighter than life.

This will be a good test stack. Its many overlapping bristles provide great opportunities for visibility errors.

I'm a bit troubled by the appearance of the eyes in this image. In the original stack frames, it's very clear that there is a short thick bristle at every vertex between the ommatidia, over most of the forward-facing portion of the eye. But in the stacked composite, this fact almost gets lost, being visible only at the top and bottom of the foreground eye. For comparison, take a look at the background eye, seen here in profile.

Technical: Canon 300D with Nikon CF 10X NA 0.30 microscope objective at nominal extension, cropped to about 50% of field width, displayed here at exactly 50% of actual pixels. 167 frames brightness-balanced and registered with CombineZM, stacked with TuFuse, no manual touchup. Single flash illumination from above front, through 5 layers of tissue diffuser, with aluminum foil reflector below specimen.

Doesn't look at all bad to me at web size, although I can see what you are saying about the hairs in the eye. I'm pretty sure I've had similar problems, and either I haven't posted those images, or it just was not obvious resized for web.

Are the hairs completely missing in the final full size composite?

Is it possible it's simply a resolution issue, the hairs pointing nearly towards us would appear as literally a spot, and then ones at a slight angle would be a very short line but this could easily dissapear into the 'lines' between each ommatidia?
Top

There's not much difference in appearance of the hairs between this web-sized version and the original composite. The problem is not resolution, it's a classic visibility error applied at small scale. What happens is that a chunk of bristle is sharply focused at one depth, the facet behind it is sharply focused at a significantly different depth, and the contrast of the facet is much greater than the contrast of the bristle. Bye-bye bristle.

From an aesthetic standpoint, this is no trouble at all -- the eye looks great. But if one considers substituting the image in place of, say, a real specimen, then there's a potential problem. Several workarounds come to mind, but it's definitely something to be aware of.

BTW, the image posted above actually looks GREAT! in comparison to what several of the other standard methods did with this stack. Between the strongly overlapping bristles and the frame-to-frame variation in flash intensity, some of the results looked so bad as to be unpostable lest I be accused of slander!

A VERY beautiful picture Rik. I love the texture of the flies exoskeleton. Makes it look like a soft plush stuffed toy. Excellent detail.
Take Nothing but Pictures--Leave Nothing but Footprints.
Doug Breda
Top

beetleman wrote:AI love the texture of the flies exoskeleton. Makes it look like a soft plush stuffed toy.

Yes, isn't that interesting? I'm used to bug hide looking smooth and shiny at these scales, but the fruit fly really does appear to have very fine texture all over the place. Quick search of the web finds scanning electron micrographs that show the same thing.

Thanks for the kudos, Doug.

The details in this one are amazing. I did notice the lack of hairs in some parts of the eye, but since I am not an insect expert it didn't bother me.

What a great job. You and the other "stackers" have inspired to try this technique.

rjlittlefield wrote:The problem is not resolution, it's a classic visibility error applied at small scale. What happens is that a chunk of bristle is sharply focused at one depth, the facet behind it is sharply focused at a significantly different depth, and the contrast of the facet is much greater than the contrast of the bristle. Bye-bye bristle.

That is a very concise description of another type of stacking artifact.

Artifacts that produce mush or fuzzy crossings are more noticeable, but this sort, where fine detail is suppressed by nearby high contrast alternatives, a sort of 'fuzz shaving' is less aesthetically annoying - the resulting image looks sharp - but equally problematic if the aim is scientific documentation rather than art.
Top

A question or two about this image and the limits of stacking.

Why do we see so much very fine detail in the antenna-like structure that pokes out into the uniform background but not in the roughly similar sized "hairs" that are between each of the the ommatidia/eye pixels? Sorry for the very sloppy anatomical language but I'm stretching my limited anatomy knowledge to present a question even this poorly. Is this a matter of the differences in luminance and/or color contrast between the hairs and their immediate background for these two cases?

I very much enjoyed the image and the remarkable detail presented in the stack, and also enjoy learning a bit more about stacking software, etc. I, too, am hoping to create some stacks good enough to post this year.
-Phil

the image is very pleasant to look, the compound eye is amazing and the texture very interesting to look at. I noticed the hair near the tree eyes in center have a somewhat "ghost" look, more noticeable at the emergence of them and less in tips.

At first seen is greatly surpassed by the nice compound eye and exosqueleton pattern, but looking more time there is a "fog effect" in the center of head.
Gustavo Mazzarollo

DQE wrote:Why do we see so much very fine detail in the antenna-like structure that pokes out into the uniform background but not in the roughly similar sized "hairs" that are between each of the the ommatidia/eye pixels? ... Is this a matter of the differences in luminance and/or color contrast between the hairs and their immediate background for these two cases?

I'm tempted to say "contrast" and leave it at that. But I can't resist a more detailed discussion.

Consider this animation of the source frames.

Given our human knowledge and capabilities, we can figure out that
- this surface tilts back to the upper left
- frames are sequenced from the back to the front
- at any given position, dark streaks are visible in later frames, and are therefore in front of, whatever is making the intricate pattern of reddish brown.
- the most plausible way to explain this is to infer that the dark streaks are separate structures sitting in front of the reddish brown patterns.

Since most structures are opaque, arguably the most accurate rendering of this would be to collect the reddish-brown patterns and then paint the black streaks over the top of them.

I think you can see that there's quite a lot of decision-making required to do this.

But as if that weren't bad enough, consider now this animation from a different section of the eye.

In this case, the situation is "the same, except", since now the streaks are bright, not dark.

So, what's needed to handle both cases is actually a "foreground structure detector" that is able to handle short streaks at arbitrary angles, that may be either brighter or darker than their surroundings, and preferably can do this without introducing an obnoxious amount of haloing, all the while running fast enough that the user would be willing to spend the time waiting.

Challenges, challenges. I'm pretty sure we'll get there, I just don't know when.

gmazza wrote:I noticed the hair near the tree eyes in center have a somewhat "ghost" look, more noticeable at the emergence of them and less in tips.

Yes, this is the classic "transparent foreground" effect. What happens is that when the lens is focused on background, it sees around small foreground objects. As a result both the background and foreground are seen clearly, in different frames. Stacking software does not understand about connected opaque structures, so it just shows whatever is the strongest detail at each pixel position. With large bristles, often there is not much detail except at the edge of the bristle, so the background "shows through".

Here is the top of the head more as it would appear if the software did understand about connected opaque structures. I have made this picture just now in Zerene Stacker by retouching together several images, a combination of PMax and DMap plus some source frames. (These are actual pixels, from the 6.3 megapixel images. I have corrected color balance to give a properly gray background, but I have not done the usual post-processing of adjusting levels and sharpening.) 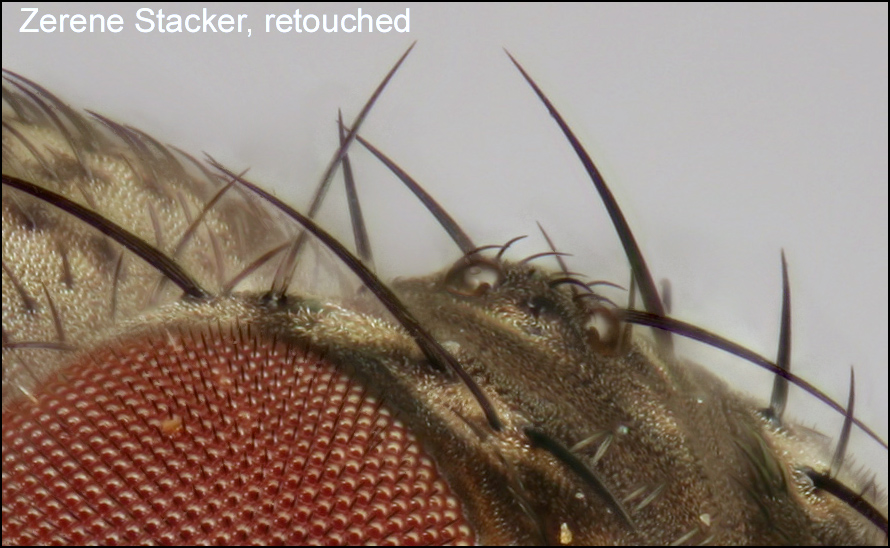 For comparison purposes, here is what Zerene Stacker PMax gives before retouching. You can clearly see transparency artifacts at places on the big bristles in the foreground. 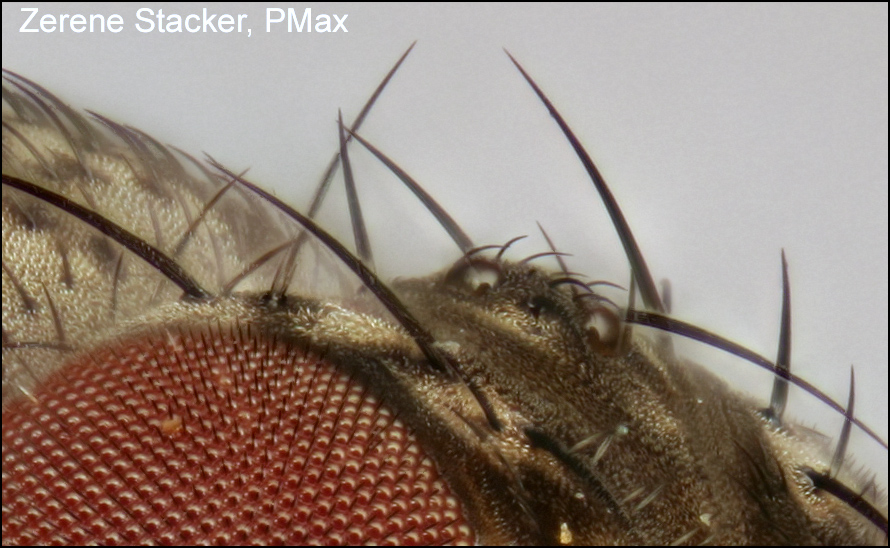 And for further comparison, here are Helicon Focus methods A and B, default parameter settings. 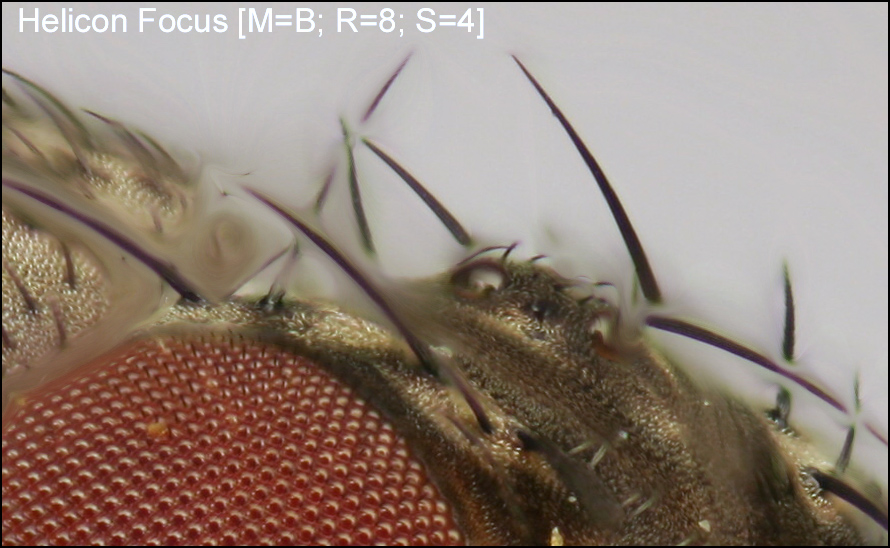 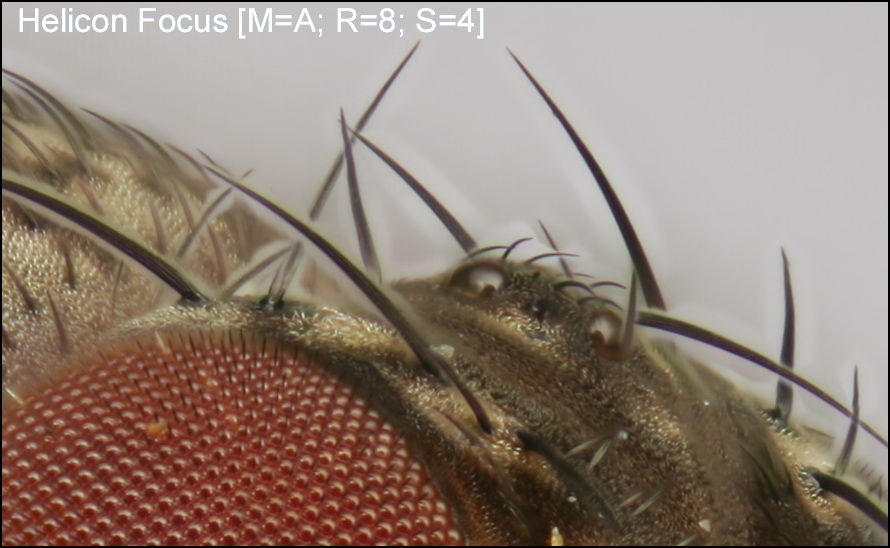 These latter examples illustrate what I'm talking about when I describe ZS as "better images, less work". I would not like to produce image #1 (ZS retouched) starting from either #3 or #4 (HF methods B or A).

At first seen is greatly surpassed by the nice compound eye and exosqueleton pattern, but looking more time there is a "fog effect" in the center of head.

I believe you are talking about the area above the eyes. You are completely correct, this area is fogged in all source frames. That is because when this area is sharply focused, almost half the entrance cone is filled with out-of-focus foreground structures. The background area is seen clearly by the top half of the lens, but the button half of the lens sees mostly fuzzed out foreground.

Here is an example of what one source frame looks like in this area (at 50% actual pixels).

So, have I go this right..?
If the software worked out from the scaling which was the front end of the stack ( it would usually get it right , or it could be told) and always kept detail from the front, if there were any, the problem would be that some oof streaks would get kept, on top of the detail behind.
But aren't they always going to be light, on the basis that light + dark is always going to be light?

If that were the case, then a retouch brush with photoshop's "Darken" mode would put it right.

Or is that miles out?

Amazing. . .you blokes are of another world.
Waay too cool for my small brain to even contemplate. . .