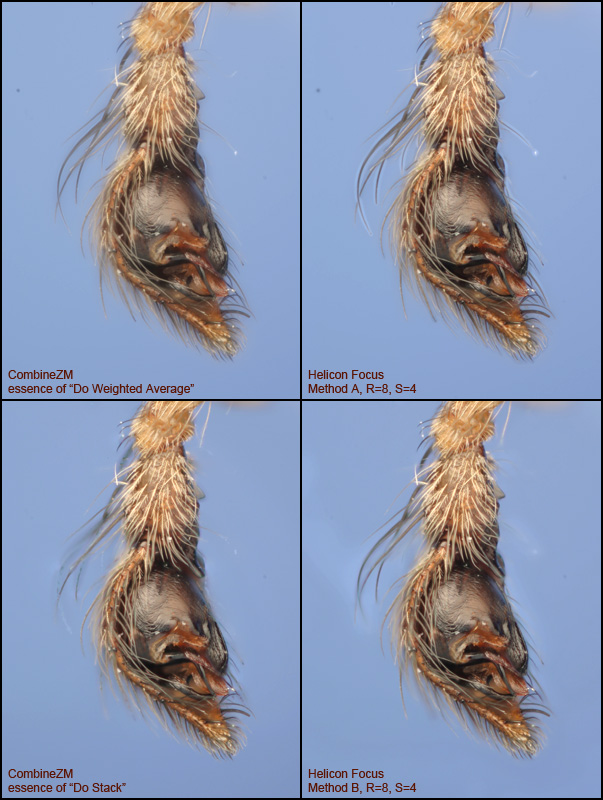 I've been running some tests lately on various stacking methods, and lauriek's recent posting prompted me to post out a few results.

What's shown here is the same stack processed through CombineZM and Helicon Focus, with options set to isolate the effects of the basic stacking algorithms. For HF, that means turning off auto-registration and brightness adjustment; for CZM, it means editing the standard macros to leave in the essence of the stacking algorithms, while deleting registration, brightness adjustment, and post-sharpening.

This subject is my spider pedipalp. It's a moderately difficult subject because it has an assortment of overlapping bristles and hairs combined with smooth structures in an interesting geometry.

This stack is also complicated by a systematic and gradual change in background brightness between the back and front of the stack. I'm not sure exactly what caused that shift, since I didn't spot it in time to debug it, but best guess is that it's due to a specular reflection off the shiny blue card, interacting with slight movement of the lens during focusing. At any rate, the shift is there, it's not unusual, and I'm interested to see how the stacking software deals with it.

What's shown here is consistent with my previous experiences, but it's far from the whole story -- that's why the post is titled "A single comparison". These algorithms give significantly different results on different kinds of subjects and different lighting conditions. I don't know how to tell a story that is simultaneously simple, accurate, and comprehensive. You'll have to run your own tests with your own stacks.

At any rate, I see two key points in these images.

The first key point is that two of methods (CombineZM "Do Stack" and Helicon Focus "Method B") give obviously inferior results where strong bristles overlap. I know how "Do Stack" works, and I'm not surprised by the result shown here. CombineZM's "Do Stack" attempts to fit a continuous depth surface to the observed in-focus points. Where bristles overlap, the depth surface really is not continuous, and trying to make it be continuous can easily result in missing some lower contrast information. I do not know how HF's Method B works, but from watching its intermediate displays and looking at the final results, I'd guess that it must be similar. I would have no hesitation in recommending to avoid these methods for this kind of subject. (However, other people report other results even in apparently similar cases.)

The second key point has to do with halo. It's obvious even at this scale (and painfully obvious in an actual-pixels view) that halo is a problem with this stack. I am intrigued to notice that CZM's output is a lot cleaner than HF's in this case. But I'm not sure how general this result is (different stacks might give different results), nor have I tested to see the effects of HF's radius and smoothing parameters.

But probably the most important point is just that there are differences in these tools and methods, and you really have to run the tests to find out about them. It is very easy -- altogether too easy -- to look at the output from one tool/method and not even notice a defect that would be painfully apparent once you compared it to another. If you're used to being bothered by halo, then an image without halo may be so refreshing that you don't even notice some of the bristles are missing. (Been there, done that, got embarrassed by it.

By the way, there's another interesting tidbit of information in these images. See the dustspot near left margin, about 20% of the way down? It's there on the top two images, but not the bottom two. Why? I had to go back and scan through the original stack to answer that question. It's simple. The dust spot isn't there for the first half of the stack, then it suddenly appears, and stays unchanged for the second half. Apparently the top two algorithms pick up on the spot as being local detail that should get preserved, while the bottom two algorithms happen to overlook it and run their depth surfaces through images that don't have the spot. When I first saw these results, I figured I must have messed up the tests and somehow run different stacks through the software. Nope -- they're all the same!

Hope this is helpful.

Excellent Rik. All being equal, Helicon Focus, is a little better. I think Charlie was saying the same thing awhile back. Very nice to see the two sided by side.

All the best and yep, VERY interesting thanks.

Interesting what people see in these things. To my eye, CZM clearly wins on this sample. The reason is that it produces a lot less halo while preserving the same amount of detail. Of course I have access to all the pixels, while you don't. I'll post out more info tomorrow. It's bedtime now.

awsome thanks for the information.
Top 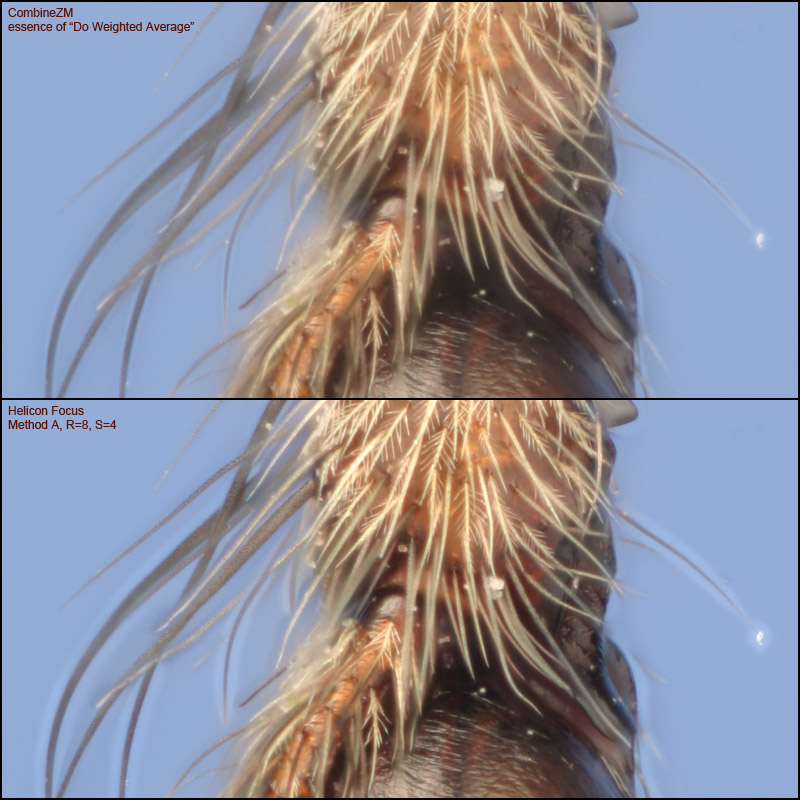 This is an actual-pixels crop of two of the methods shown in overview of last evening's post. No retouching or sharpening of any sort.

Looking more closely this morning, I see that I was mistaken about "same amount of detail". In fact, HF has preserved more of the very fine texture on the large bristles.

So once again, we see that which tool is best depends on what you want to do with the final image. At any reduced scale, I'd probably go with the CZM image on the basis of its lesser halo, but if I wanted absolutely the most detail I'd probably go with HF and retouch the halos (as in fact I did with my earlier stereo pairs).

Throw in the differences in cost, speed, usability, add into the mix some other tools that have still different tradeoffs, and the whole thing becomes quite a head-scratcher.

Still, it's good to remember that we're haggling over differences between tools that do things we could only dream about 10 years ago and are all enormously better than what were available only three years ago. And there's better stuff coming out all the time. These are exciting times, folks!

rjlittlefield wrote:And there's better stuff coming out all the time. These are exciting times, folks!

OK, I guess I can come clean that I had already played with TuFuse a little bit when I wrote that line about "better stuff...".

Here's an updated comparison -- all of the detail with none of the halo. 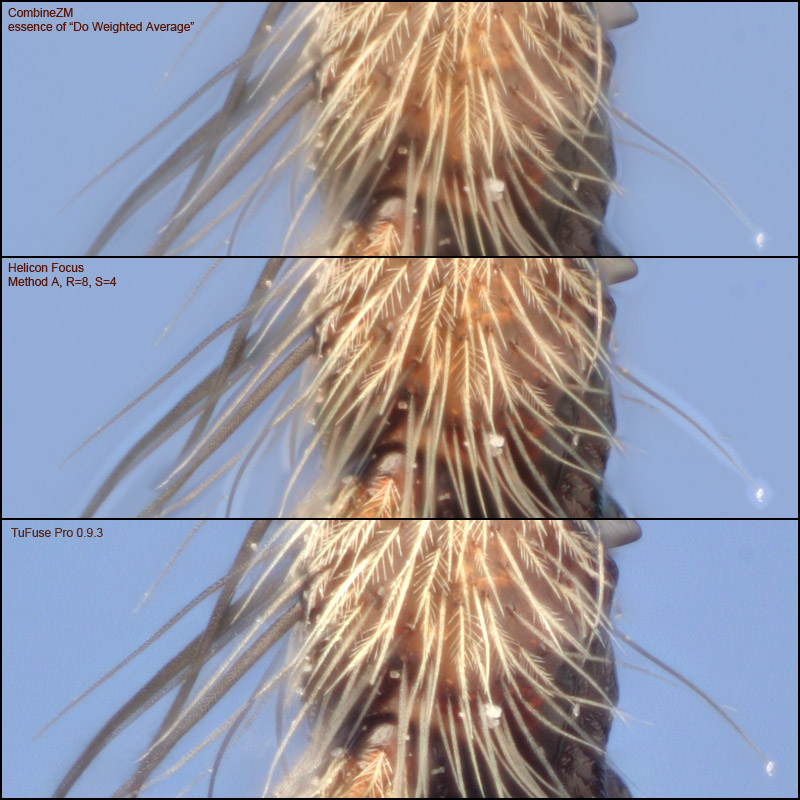 Absolutely fascinating Rik. So are your other threads on this. Now if you could only have and use just the one, what would it be ??. I might have missed that, so I'm going back for another read. I have a fair idea it might be Helicon Focus, but I could be wrong. This is excellent.

Sorry, but I can't answer the question.

That's a choice I don't have to make, and I don't think anybody else does either.

CombineZM is free. So is the non-pro version of TuFuse, and it does a pretty good job too.

HF costs money, but I like it because it's fast and it has a nice user interface for editing. The downside is that sometimes it would take a lot of editing, compared to what I can get from the other tools.

If I were short on time, long on money, and not such a perfectionist, then the choice would be easy -- buy HF and be happy.

On the other hand, if I were short on money, then the choice is also obvious -- get CombineZM and TuFuse for free and be happy.

Or on the third hand, since I do have enough money, enough time, and I am a perfectionist, there's what I actually do -- get all three tools...and be not completely happy because none of the tools are completely perfect!

Ah well, at least boredom is never a problem. And in the immortal words of George Bernard Shaw:

LOL, round and round the Christmas tree we go. So in other words, you would like someone to mix the best parts of all 3 together huh

PS: Danny, you still didn't get an answer

Worry about the image that comes out of the box, rather than the box itself.
Top
Post Reply Previous topicNext topic
9 posts • Page 1 of 1