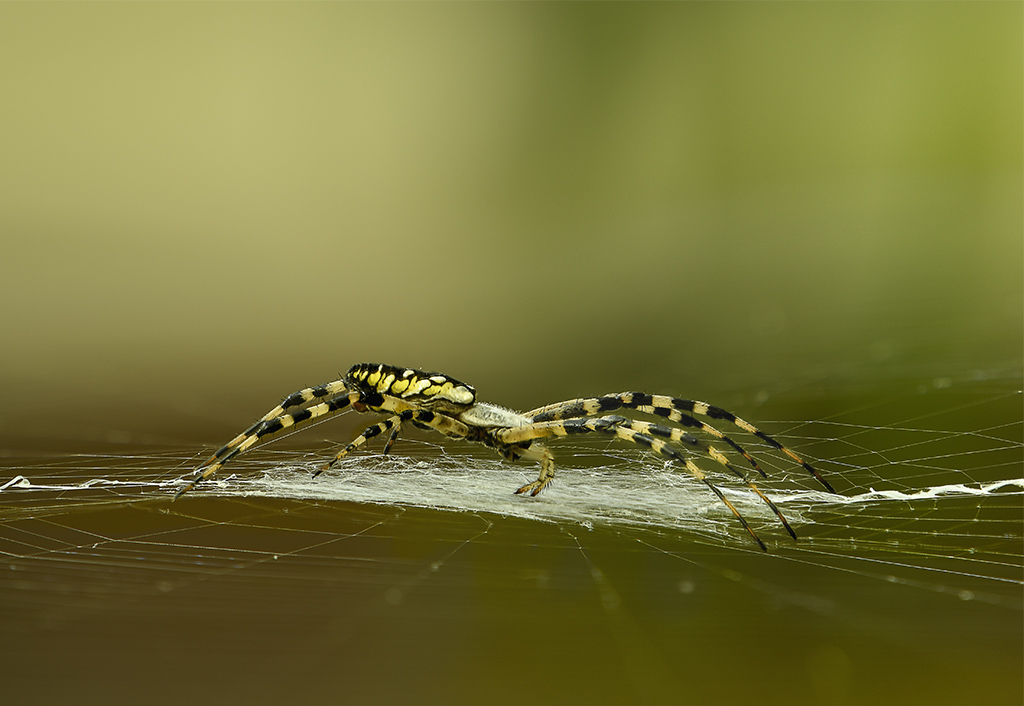 Thanks, Mark. Not a natural perspective, but I found it interesting. Incidentally, I just learned of research (using colored paper spider surrogates) that indicated that the vivid coloration of these guys was attractive to prospective prey.

Leonard, this is a great image!

I am curious about the setup.

In the larger image that you sent to me for the front page, I noticed that the embedded information reported by Windows File Explorer > Properties > Details says Nikon D850, 480 mm focal length, f/6.3, exposure time 0.6 seconds, with tags of "In-camera stack, level 2". The file name suggested a 50-frame stack.

Is all that correct? What more can you tell me about the setup for shooting this beast?

You are quite correct. The spider chose to construct its hunting platform in an area that was both obvious and devilishly difficult to get close to, making my go-to 105 macro not a feasible choice. Since the Nikon D850 has the ability to shoot stacks in-camera, and can do this with a variety of lenses, I decided to drop back to a place where I could get a tripod on the ground and use the Nikon 200-500 f5.6 rather than the macro, which lacked the reach. 50 images were made with existing light over a minute and 23 seconds or thereabout. The spacing I set was "2" rather than the usual "5" I would tend to use for the 105; this was a guess, of course, as I was in new territory with the big lens.

It might have produced a better image with a set level of "1", but the web was gently drifting back and forth in the wind (easily seen by scrolling rapidly through the images in the stack) and a longer shoot time might have made things even worse. I thought that your Zerene program did a remarkably good job of dealing with the situation. The final image was rotated some 90 degrees to an unnatural but (I thought) visually interesting position.