In early February, 2019, my area had a series of snowfalls. One of them was unusual because the stuff was strikingly dirty. Clearly there had been some high wind, blowing in from a place that was not yet covered by snow.

Here are a couple of shots of what was in it: 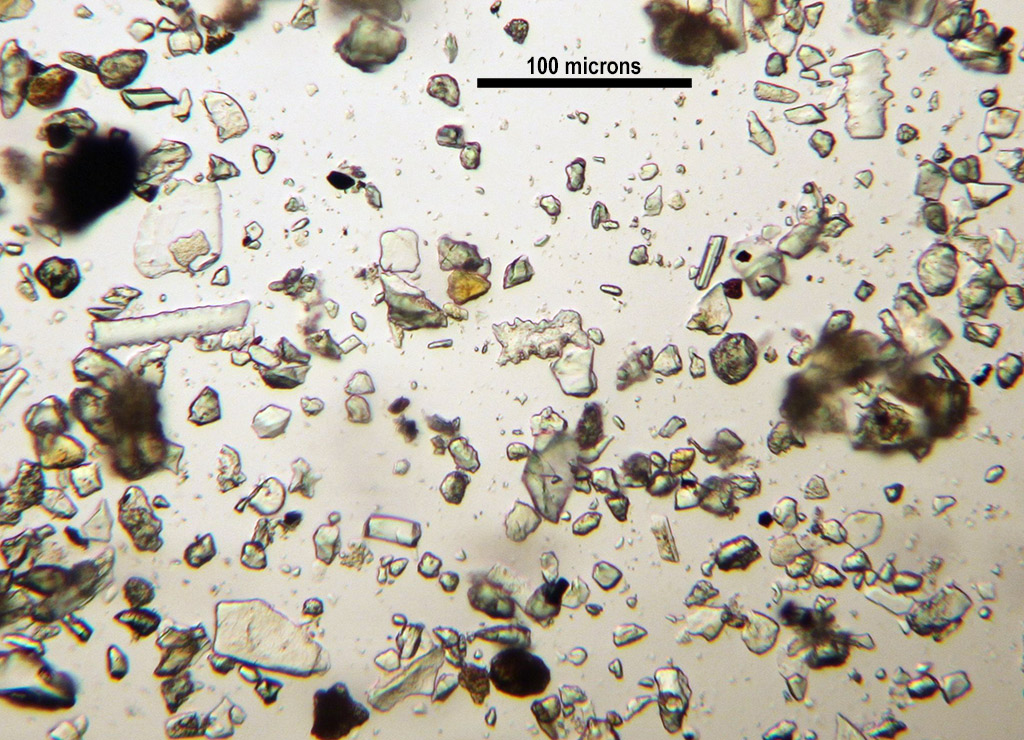 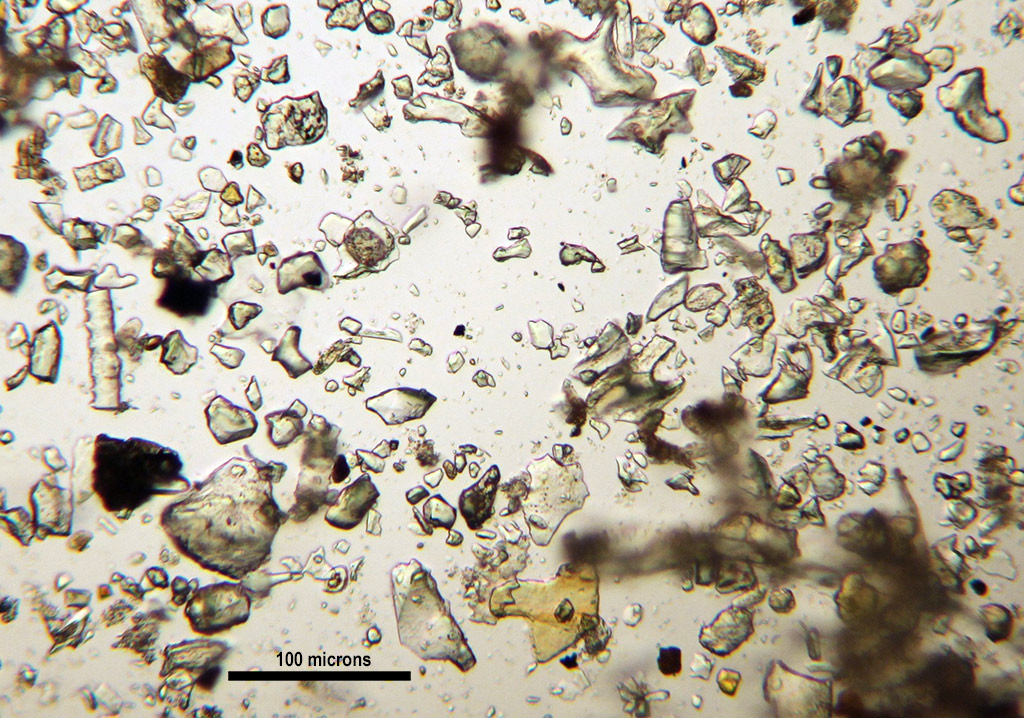 After the snow had melted down and compacted quite a bit, the picture looked like this: 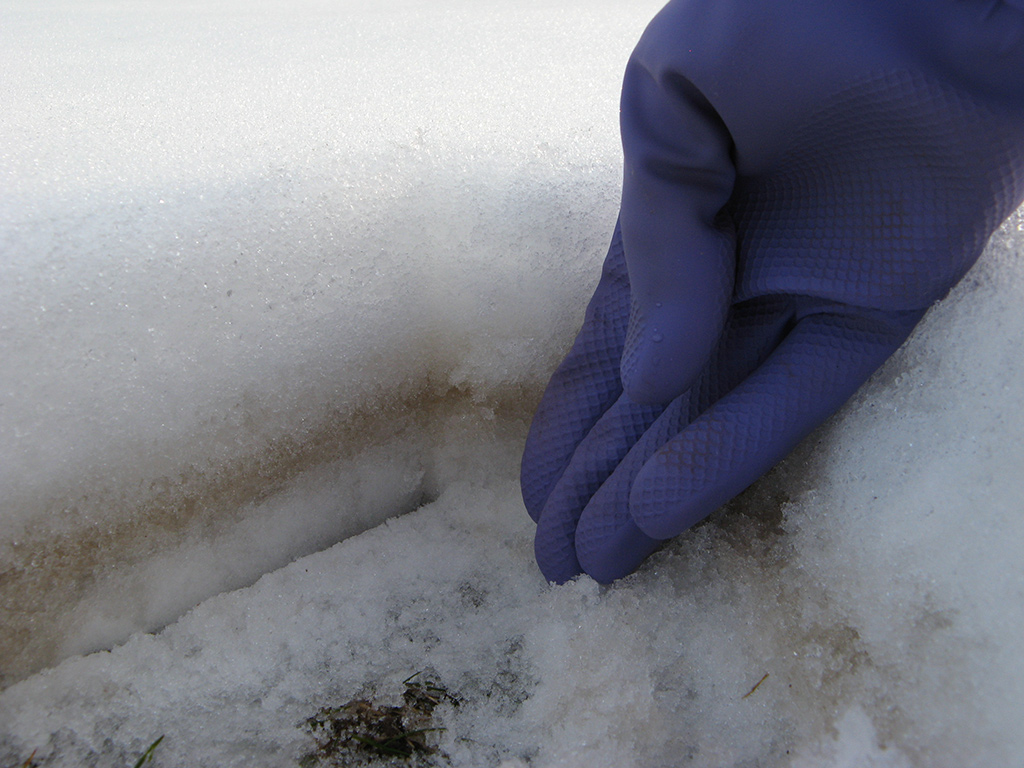 I collected a gallon or so of the dark layer, melted it down, and let the dust settle out.

As soon as I put the stuff under the microscope, I was struck by the large number of long pieces with serrated edges, almost like knapped flint. My first thought was organic, but they're brittle and they settle out fast, like mineral. Not optically active, at least in quick test.

Are these photographs reflected light or brightfield? If brightfield (if the grains are transparent), my brain keeps whispering "mica" for some of the non-serrated grains. However, nothing I've found on the Internet so far backs up this intuition.

The apparently-sharp edges on the serrations seem like a clue to origin, as bits that have weathered out of rock may have sharp edges at first, but these get rounded as a clastic gets moved and tumbled by water action. I've trusted this rule with pieces I can hold in hand or view with a hand lens. I presume it still applies at the microscopic level, but don't know.

"(T)hey settle out fast, like mineral"--interesting observation. My first thought was that if they settle out fast in water, they should settle out even faster in air--so how are they staying airborne long enough to get entrained in snow? But pictures on the Internet of atmospheric mineral dust show particles that are not out of line in size with yours. Makes me wonder if atmospheric electrokinetic forces are holding them up.

Interesting sample. As Chris mentioned, some of the grains may correspond to mica minerals, particularly those very thin and having a flake-like shape. There are some greenish grains, which probable are olivine and or pyroxenes.
The serrated grains may correspond to "glass shards" derived from some volcanic ash. If this is the case, they should be practically isotropic under polarized light. Can you post a photo with cross-polarized light?
Top

First, let me say Dirty Snow would be a great name for a Canadian bar band.
From what I understand, snowflakes and raindrops form around particles in the air. So you might even be able to find micrometeorites.

Thanks for the interest and suggestions.

The illumination is oblique brightfield, accomplished by blocking about 1/2 the width of the microscope's base illuminator. The objective is a generic Edmund Optics 20X achromat.


Chris S. wrote:how are they staying airborne long enough to get entrained in snow?

I've never researched the mechanisms, but I've always accepted the idea that airborne dust is mostly a matter of settling speeds versus updrafts and turbulence. https://www.dustwatch.com/how-far-do-du ... travel.html notes that the terminal velocity of falling quartz spheres is roughly proportional to diameter squared, with two data points being 1 micron --> 1.6m/13hr and 250 micron --> 2.5 m/sec. Doing the math, I get that these are roughly 4e-5*d*d, where d is in microns and the result is in m/sec. Plugging in d=20 microns as some "average diameter" gives me an estimated terminal velocity of 0.016 m/sec. That seems easy enough to keep airborne without invoking any exotic mechanisms.

Aha! That would make great sense, considering where I live. (Original map HERE.)

If this is the case, they should be practically isotropic under polarized light. Can you post a photo with cross-polarized light?

Here's one in brightfield: 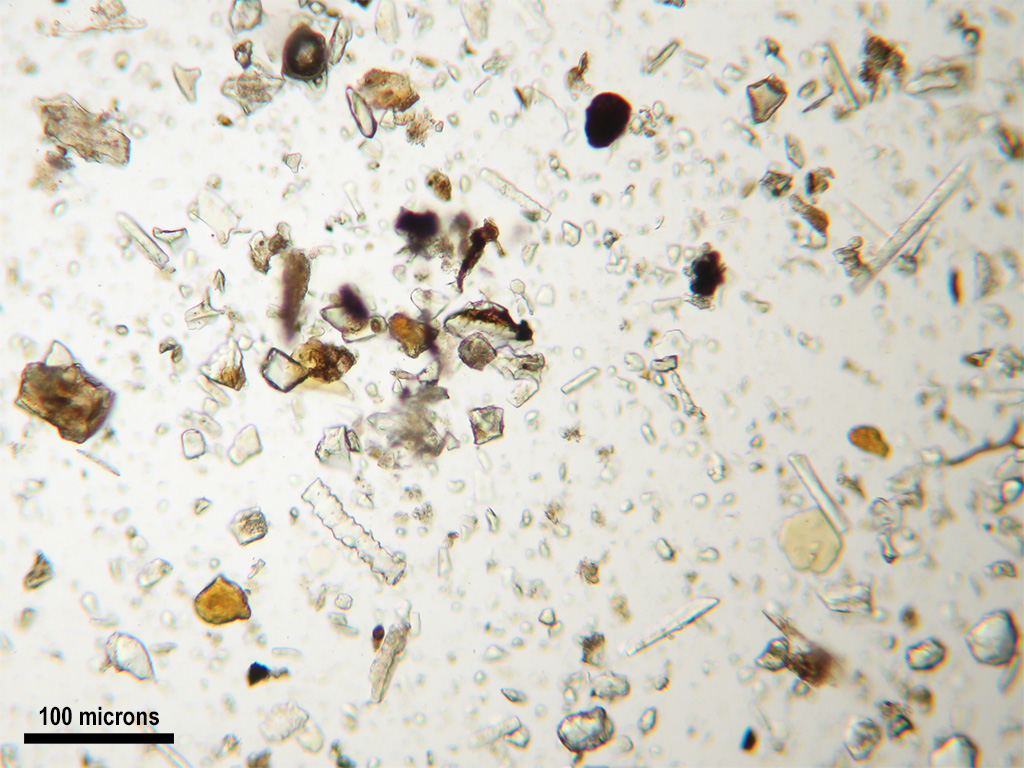 and the same thing plus 3 cross-polarized at various angles and with 8X more exposure: 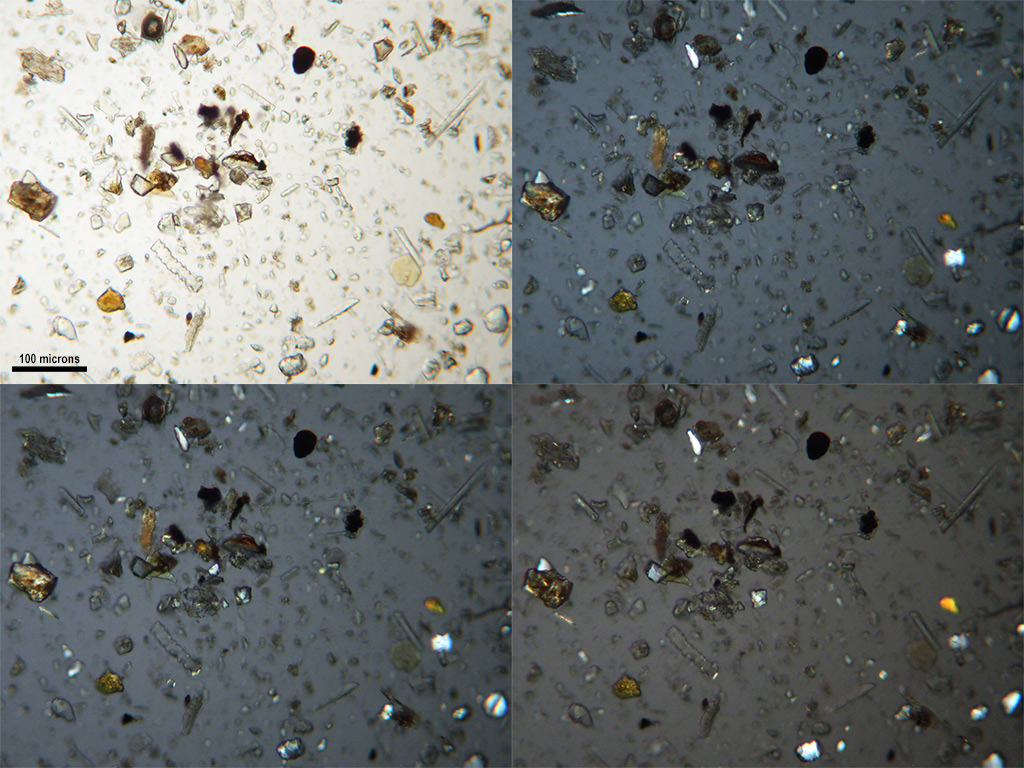 The long skinny things look pretty isotropic to me.

long time since I posted but too interesting a topic.....

I think that the long serrated objects are phytoliths and perhaps derived from cereals eg corn.

Brian, thanks for the suggestion! Phytoliths are a new concept for me -- silica in widely varying shapes, some quite complicated! I agree that the images I see on the web are a great match for what I see through the scope.