Getting right to the imagery, here is a stereo pair, crossed-eye: 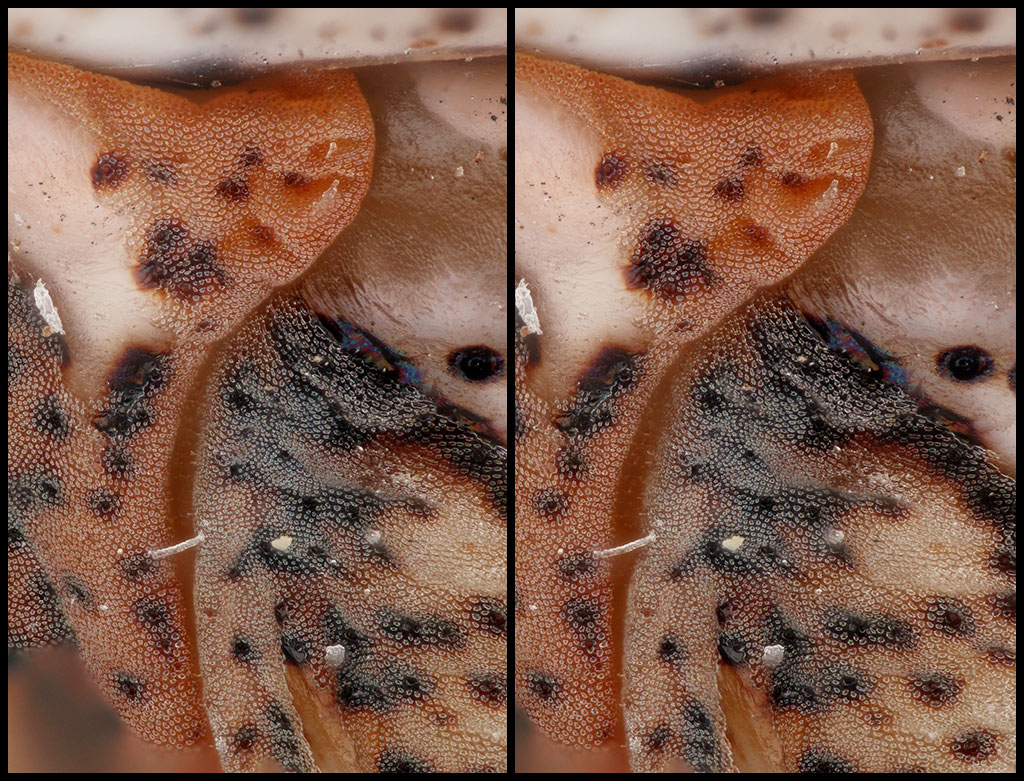 What you're looking at is a small section of a Brown Marmorated Stink Bug (BMSB). Specifically, it's the part that's outlined here: 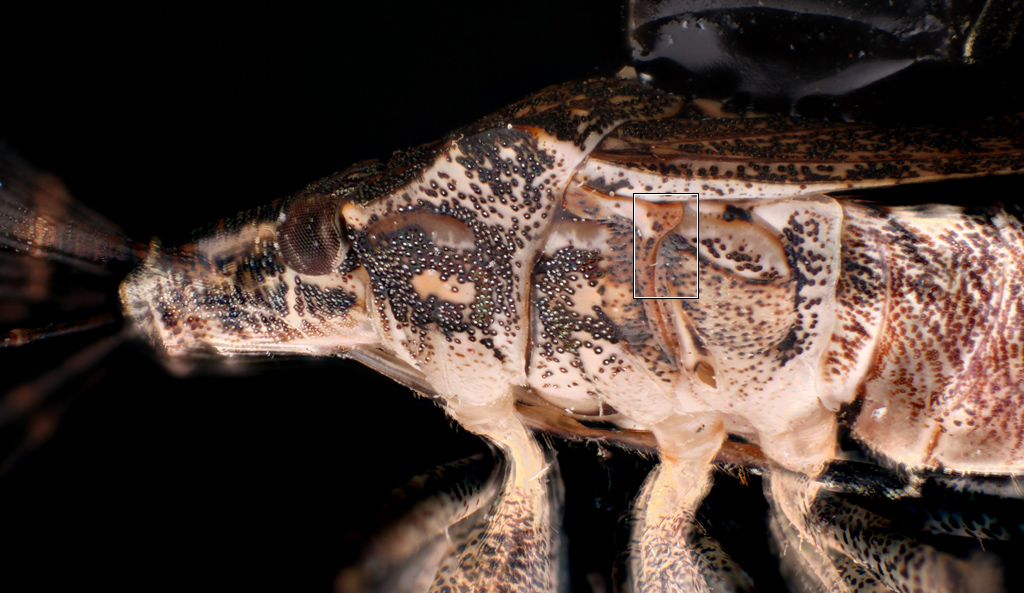 The background story is that while reading about stink bugs in Thomas Eisner's book, "For Love of Insects", I was struck by this bit:

Stink bugs derive their name from the defensive secretion they eject when disturbed. In the immatures (the nymphs) the glands open on the dorsal surface of the abdomen, an area which in the adult is covered by the wings. Not surprisingly, therefore, adults have a different glandular arrangement. They possess a single large gland, situated midventrally in the thorax, with two separate openings on the sides of the body just above the legs. Pentatomids take on an intense odor when they discharge, and the odor is persistent. One reason for this is that some secretion invariably becomes trapped upon ejection, in a specialized region of cuticle immediately adjacent to the gland opening that is minutely sculpted so as to serve as a physical sponge. If one examines that region immediately after a bug has discharged one invariably finds it to be soaked in fluid."

So, while I had my live BMSB rigged up to shoot the "balloons in pits" a couple of weeks ago, I also took some time to shoot the area that Eisner is talking about.

The main opening to the stink gland is that teardrop-shaped opening just above the base of the middle leg. There's a sort of diversion channel that extends from the opening, up and out to this area of sculptured cuticle.

Of course I couldn't resist trying to take a close look, so I put on my 20X NA 0.42 Mitutoyo objective. That's the highest power I have that can work from far enough away that the live bug couldn't grab it. With my setup, that gives a frame size about 1.0 mm x 0.7 mm on subject, which is the area shown in the first image.

Zooming in to roughly actual pixels, here is a closer view of that highly sculptured cuticle: 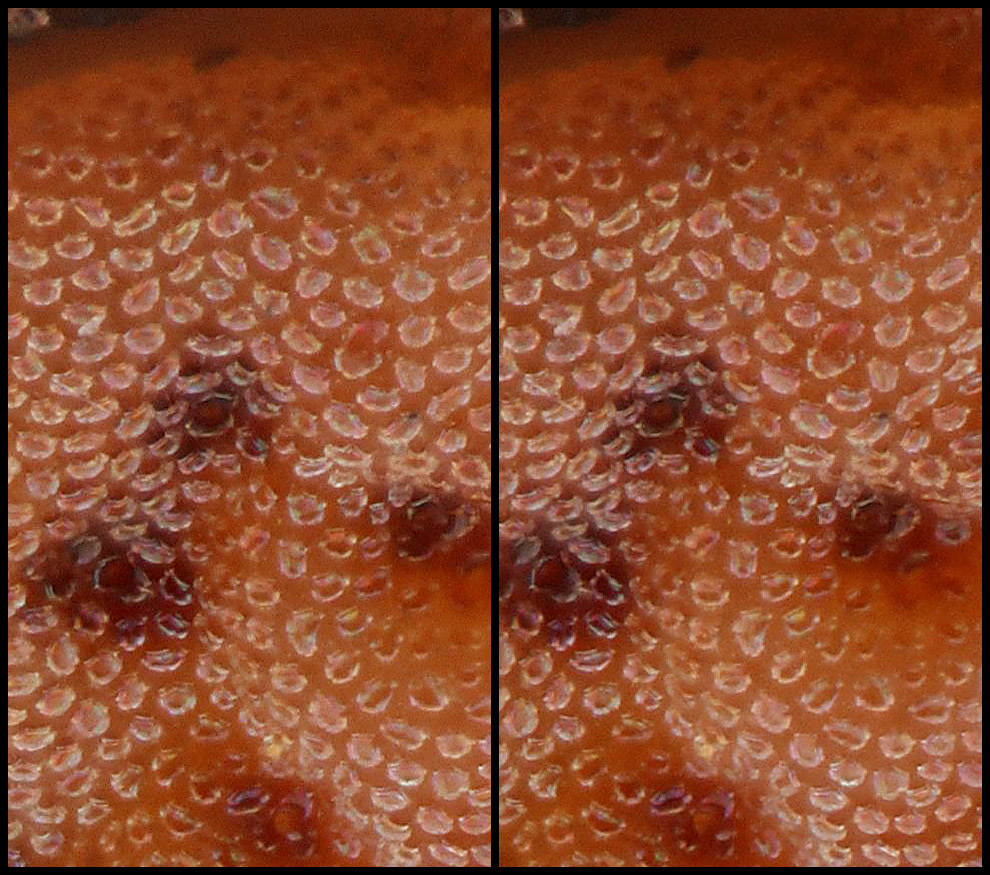 In this closer view, especially when seen in stereo, it's clear that each of the little circular dots seen in the first image is actually something like a broad flat mushroom cap with frilly edges.

That effort, after quite a bit of time that I'm not sure was well spent, eventually produced this image. This is gray scale because that objective generates some truly spectacular false colors in OOF regions. The "cluster of grapes" at the bottom is a bit of mold. If I recall correctly, this specimen was found dead in the bottom of a cage some years ago. 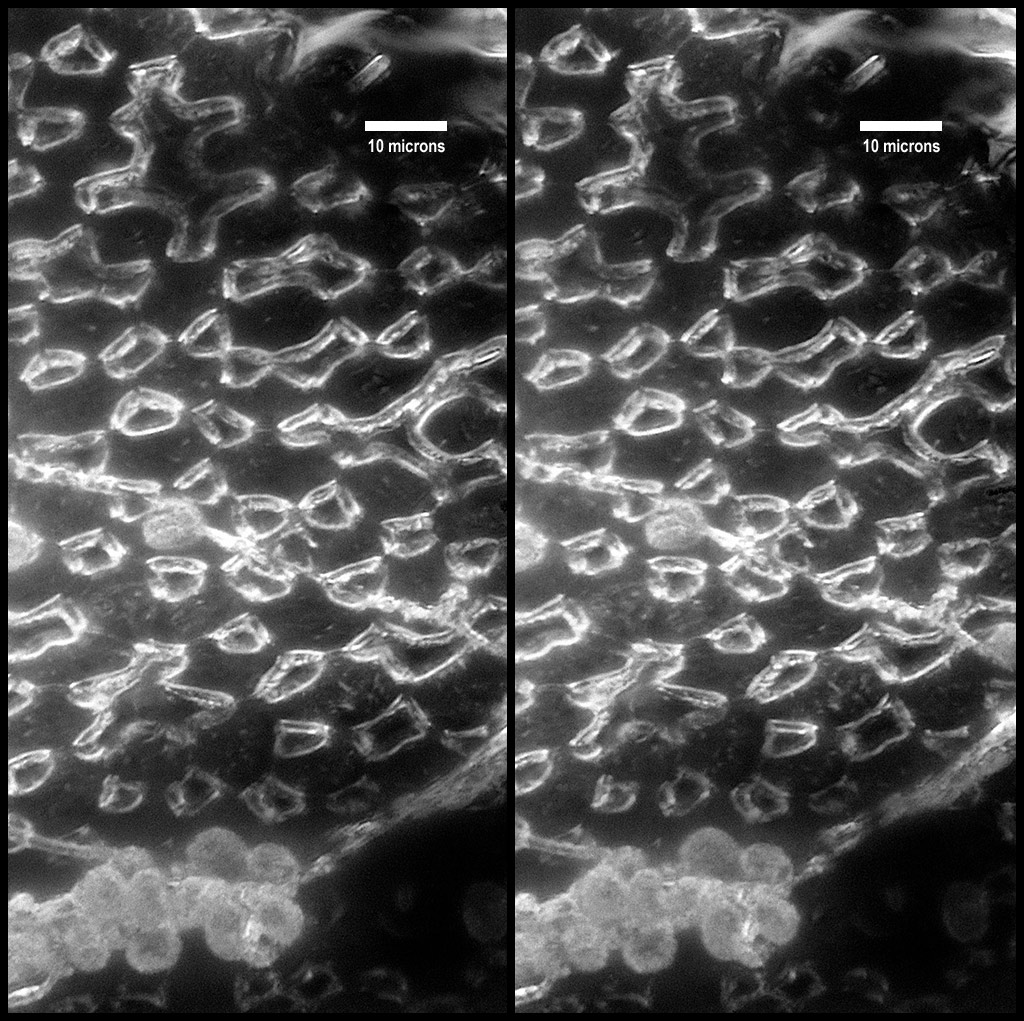 I was hoping to get a completely clear indication of whether the frilly edges roll up, or roll down, or do something entirely different. At this point, I think the answer is a resounding "can't tell for sure". The strongest impression I get is that they roll up, but at this scale I'd bet that the frilly edges are thin enough to be transparent, and they're so small that even the stereo is ambiguous.

It's probably a matter for an SEM to sort out, if I should ever have access to one of those. The SEM image in Eisner's book, showing analogous area on a different family of bug, shows what looks like a fundamentally different structure. It also suggests there are levels of sculpturing too small to even be hinted at in these optical images.

Are you able to smell the “stink” on your captive bug? I have leaf footed insects (similar size and shape to BMSB) that invade my home occasionally in the fall. They are cousins to stink bugs but I never notice any scent. BugGuide (link) says these can emit a pungent odor. Happily, not yet observed by me!

I do find this interesting. It does make sense that they would have this sculpting to help coat themselves with their defensive secretion.
Mark Sturtevant
Dept. of Still Waters
Top

BugEZ wrote:Are you able to smell the “stink” on your captive bug?

As far as I know, my captive bug has never discharged. There's no odor in the container except what I can attribute to food going bad. (I give it little chunks of raw apple to suck on.)

More broadly, I think that in my entire life I have never been around a stink bug that has discharged. Eisner's book reports getting good responses from grabbing a leg with forceps, but I guess my ham-handed whole body pinches just don't do the job. As far as I know I have a normal sense of smell, and I've smelled lots of other kinds of bugs, but stink bugs have always seemed misnamed!

ADi, have you tried viewing stereo with one of the mirror-based viewers, like for example https://www.berezin.com/3d/pocket_3dvu.htm ? These work really well in combination with StereoPhoto Maker software (SPM, http://stereo.jpn.org/eng/stphmkr/index.html). You just load the crossed-eye image into SPM, push the button to Swap Left/Right, and view the result with the viewer.

Hello Rik,
No, I haven’t. Many thanks for the hint!
BR, ADi
Top
Post Reply Previous topicNext topic
6 posts • Page 1 of 1