Shooting through water at high NA is hampered by spherical aberrations and astigmatism. The way to escape those physics limitations is to find lenses that are corrected to shoot through thick glass. Multiply the thickness of glass times 1.1 or 1.2 and you have the amount of water the lens should be able to shoot through without those aberrations.

All digital camera lenses are designed to send their image through the glass filter pack in front of a digital sensor. This gave me the idea to use reversed digital camera lenses to shoot through water. Most cameras have filter packs that are only about 2mm thick, but Micro Four Thirds cameras have filter packs of 4.2mm thickness. This means I can use MFT lenses in reverse to shoot through the equivalent amount of water, which is about 4.8mm.

If I want the zone of tolerance to include the surface of the water, then the tolerance zone should be about 4.8mm thick in each direction from the plane of best sharpness. My formula says that the aperture which will give this tolerance is between f/2.8 and f/3.2, depending on how the aberrations vary with wavelength (we aren't sure about that). Thus a reversed MFT lens set to 2.8-3.2 should give a sharp image from a depth of about 9mm to a depth of near zero mm. There are lots of uncertainties about this formula and its validity, but it gives me a starting point to test empirically.

I first tested it on a reversed Four Thirds lens, because I wrongly assumed that Four Thirds cameras used the same filter pack thickness as Micro Four Thirds cameras (since MFT cameras support Four Thirds lenses and their adapters). This is what I got last night, using a tiny new species of orchid sitting on its side in 5mm of water in a glass cell. The lens is the famously sharp Four Thirds Olympus 50mm macro lens reversed, set at f/3.2, on a Mamiya 200mm tube lens. The magnification is 4x, on a FF sensor. Please ignore the stacking artifacts and floating garbage. None of these photos are sharpened or adjusted. 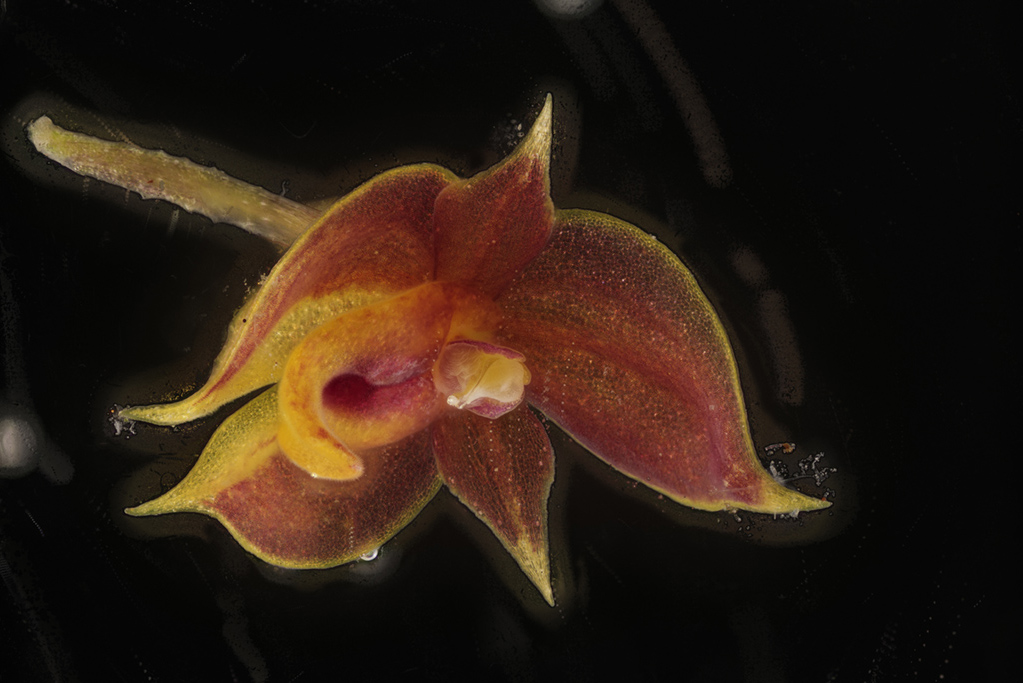 The pointed petal pointing downwards is resting on or near the floor of the cell, at a depth of 4-5mm. If the lens had been corrected for a 4.2mm sensor filter pack, this petal should have been perfectly sharp. Instead it shows the classic smeary cross-shaped aberrations commonly seen when shooting through water, here at 100%: 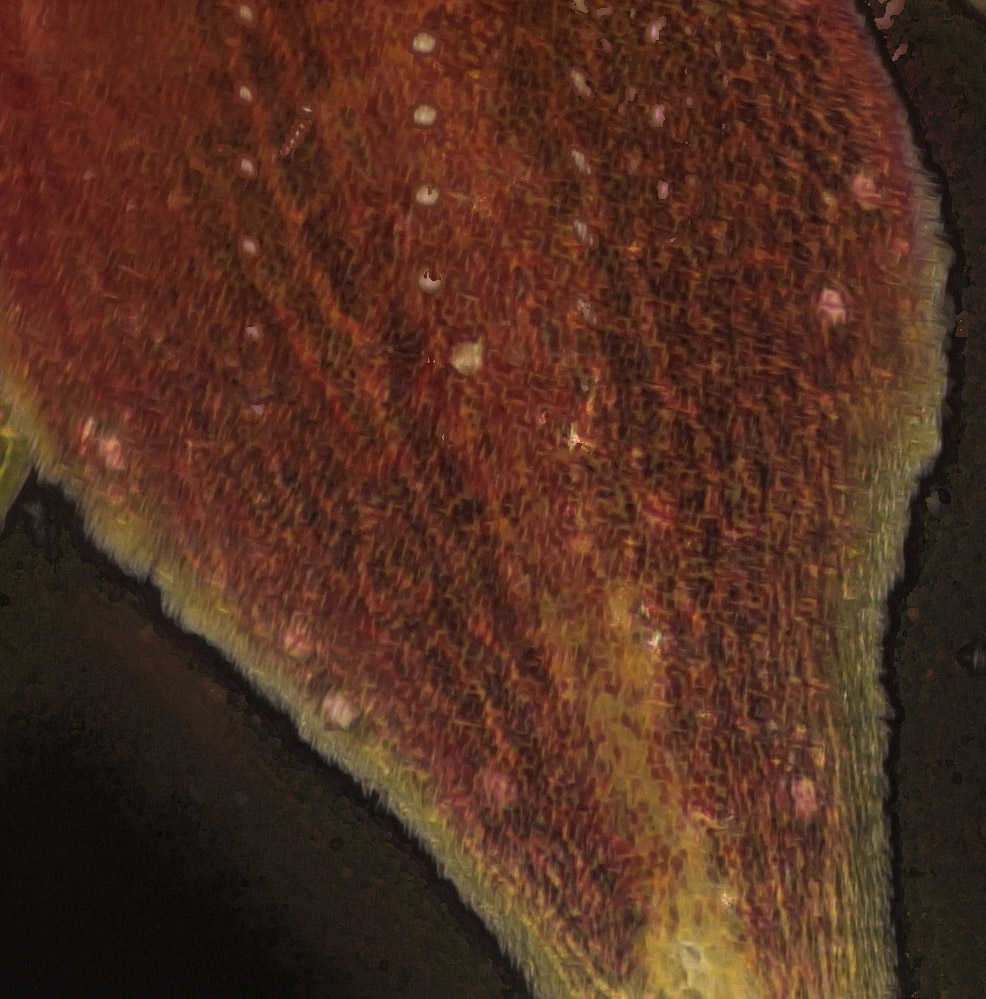 The petal pointing upward has its point very near the surface. It is fairly sharp at 100%: 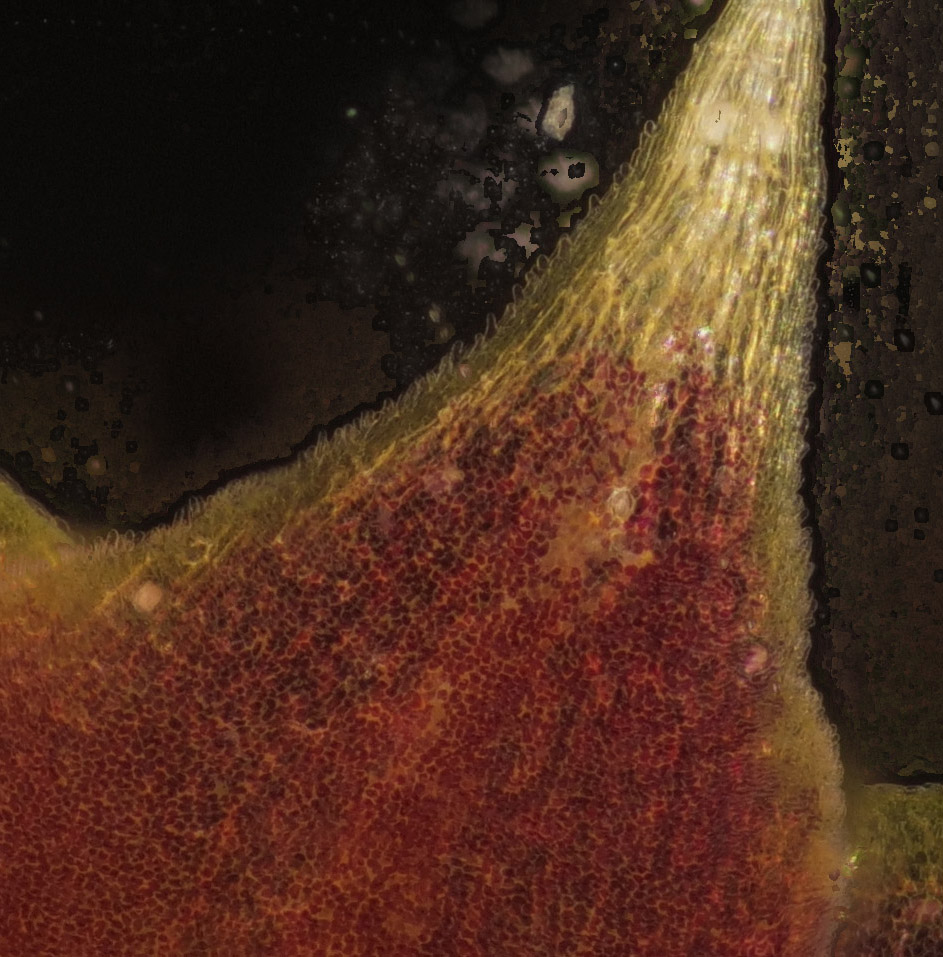 So obviously I was wrong about Four Thirds lenses being corrected for a thick sensor filter pack. Too bad, becuase they have great working distances.

MFT lenses have about half the working distance of Four Thirds lenses, but at least they really are corrected for a thick sensor filter pack. I used another flower from the same orchid species today, again in 5mm of water, this time using a reversed cheapo Panasonic 42.5mm f/1.7 MFT lens, used at f/3.2 on the same Mamiya 200mm tube lens: 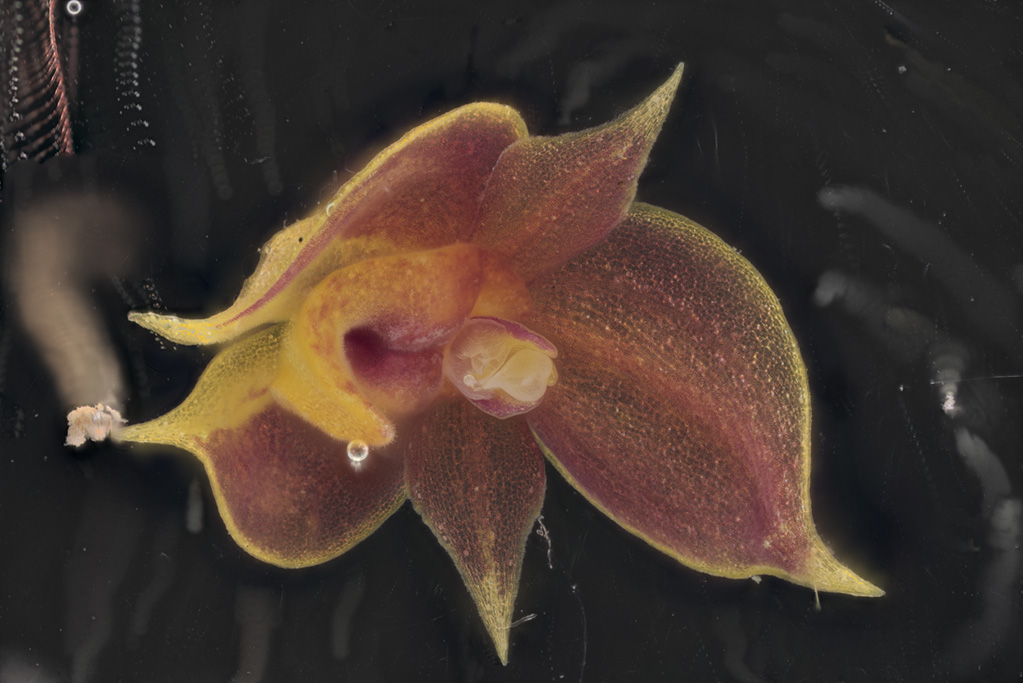 Now the petal pointing down, which is at the bottom of the cell under about 5mm of water, really is sharp, as predicted by theory (100% crop): 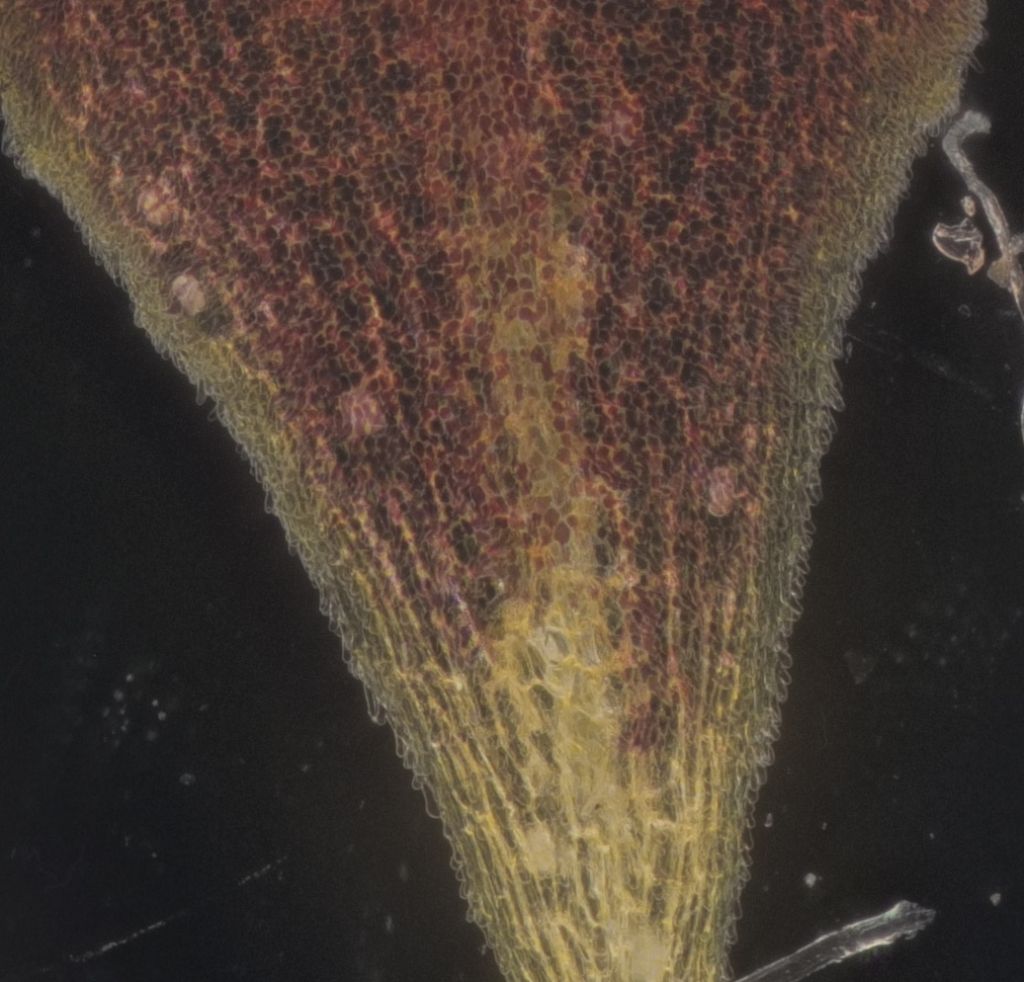 And as predicted by my formula, the tolerance zone at f/3.2 extends to the surface; the petal pointing upwards, whose tip is near the surface, is sharp (100% crop): 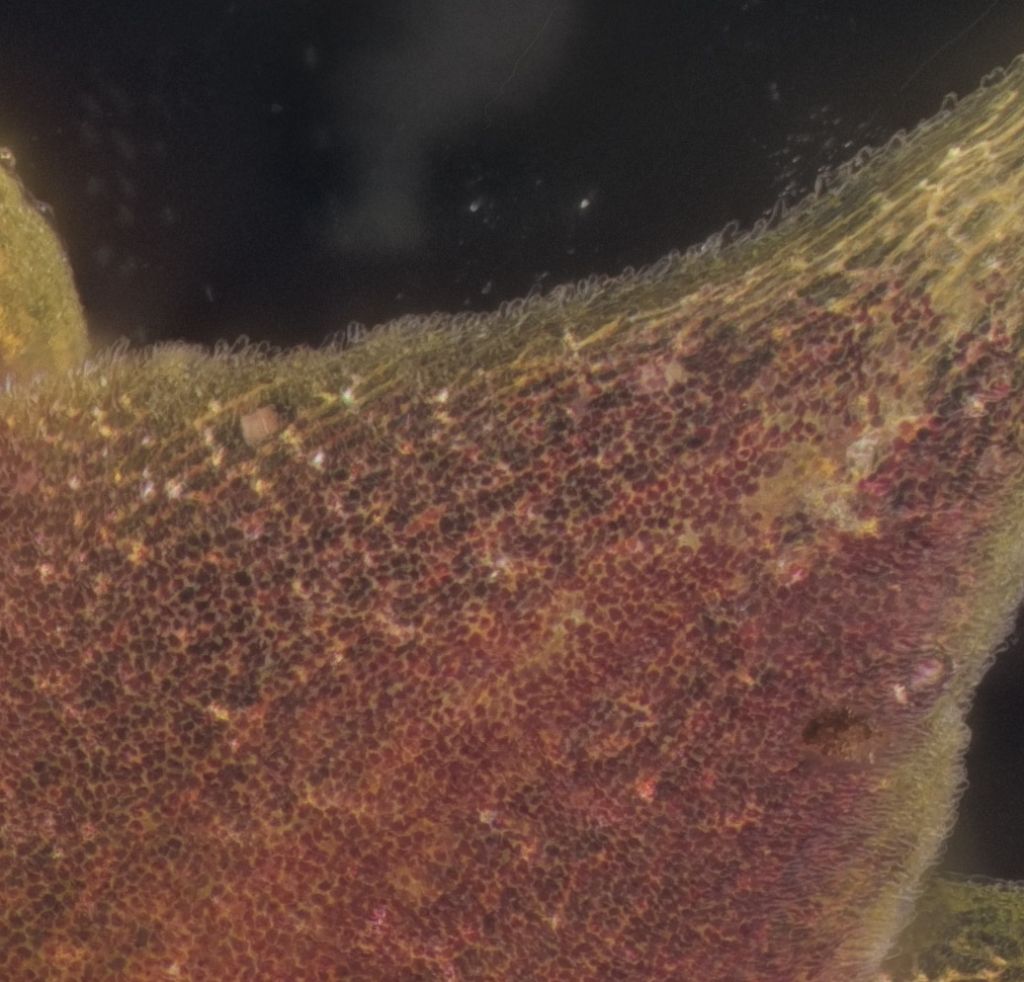 In that set-up I have wasted a large part of the tolerance zone; I could do better by raising the water level to 8mm, so that the zone of sharpest imaging cuts through the middle of the flower instead of passing through the lowest edge of the flower. This does turn out to be better, and has the additional advantage of eliminating the effect of the floating garbage seen in the other pictures: 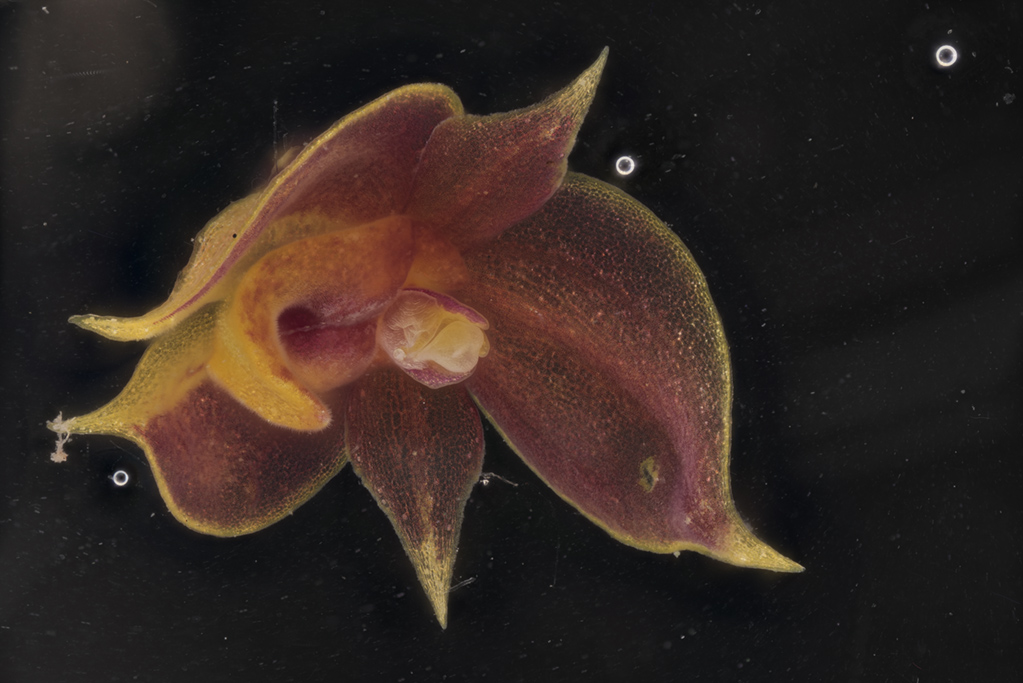 Here is a 200% blowup of the bottom petal, 8mm below the surface, showing cell-level detail: 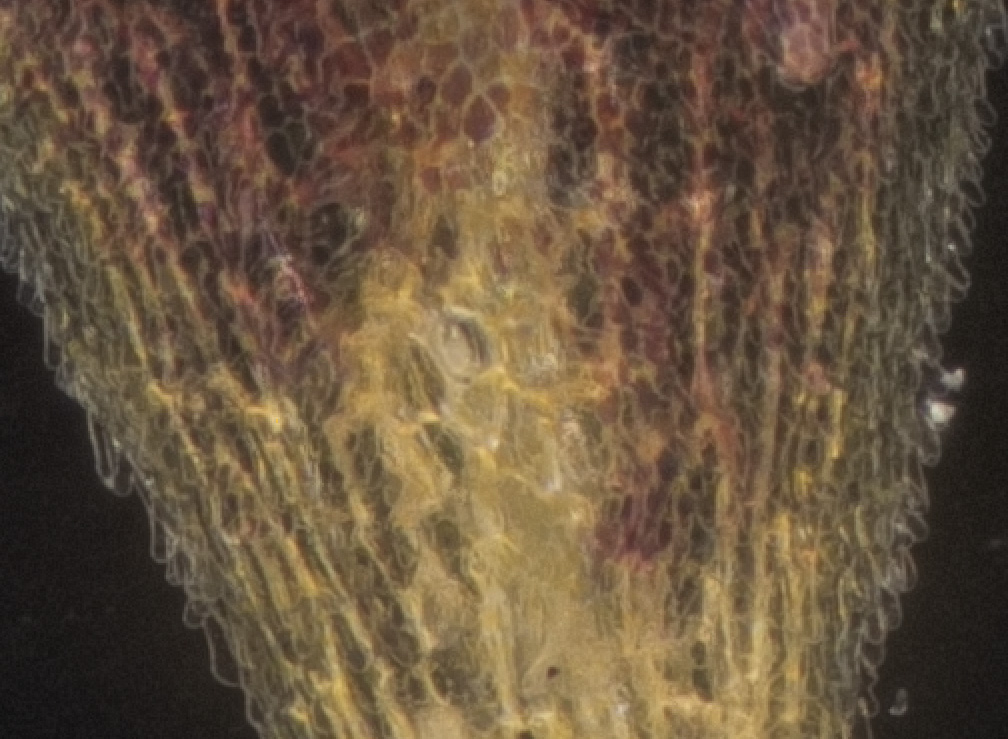 And the same for the other petal, about 3mm below the surface: 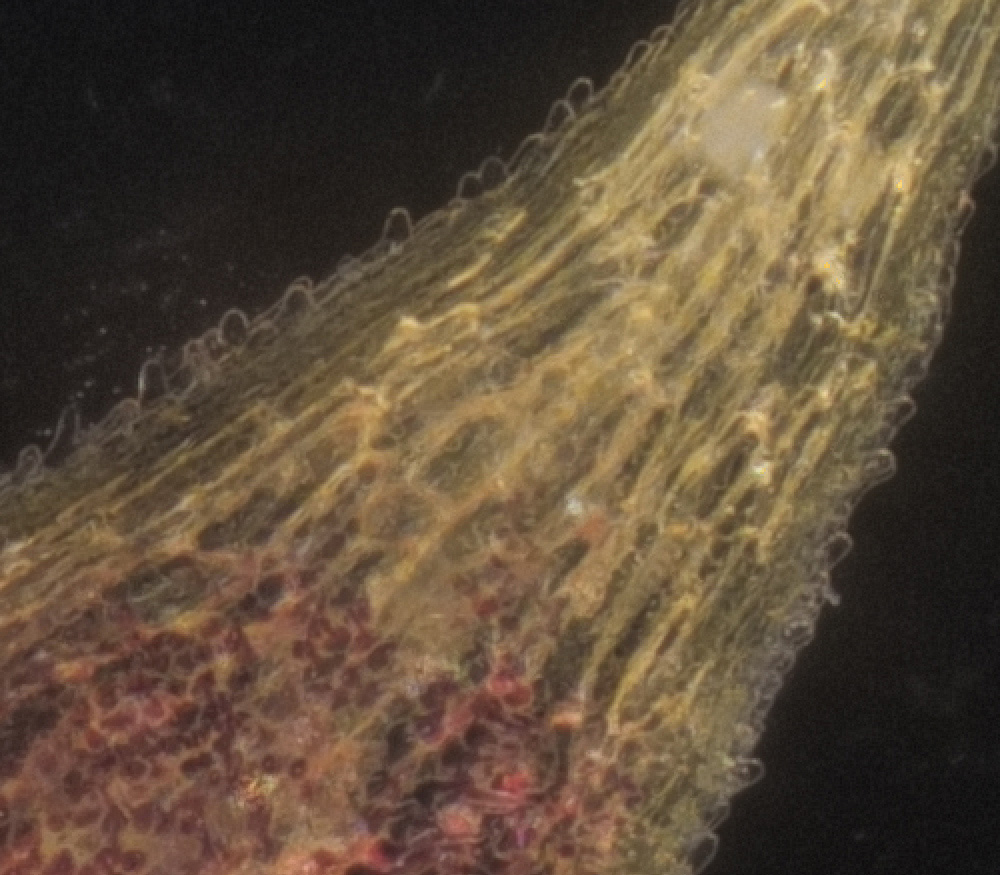 So we now have a way of imaging objects in water that are up to 7 or 8mm tall in the z-direction. This approach has the additional advantage of being telecentric, for all MFT lenses; the ratio of successive scale factors in Zerene is 1.000003. So any size object in the x-y direction can be stitched together perfectly. The Mamiya tube lens with a shift adapter also allows me to make small stitches by moving the FF sensor across the medium-format image circle.

There are surely better MFT lenses for this than the cheap one I chose here. The Pana-Leica Nocticron (same focal length) has much better MTF curves.
Last edited by Lou Jost on Thu Nov 21, 2019 8:17 pm, edited 1 time in total.
Lou Jost
www.ecomingafoundation.wordpress.com
www.loujost.com
Top

Another breakthrough from you! Huzzah!

(I well-recall the one with stacked lenses. You never got the victory lap you deserved--hope we don't make the same mistake this time.)

I'm forgetting which camera body you're using here, and how thick its filter pack is. Or is it a body with filter pack removed?

Based on this proof of concept, one can't help but imagine a water bath with pump and filter to remove floating debris, a bubble remover (either chemical or mechanical), and some method of altering the amount of water between subject and camera to increase tolerance depth during a deep stack (e.g. mechanical elevator for subject, or microfluidic peristaltic pump to adjust water depth). But no doubt you're already thinking of countless such things.


...some method of altering the amount of water between subject and camera to increase tolerance depth during a deep stack (e.g. mechanical elevator for subject, or microfluidic peristaltic pump to adjust water depth). But no doubt you're already thinking of countless such things.

I've made one advance in that direction. Attach a coverslip-bottomed rigid "boat" to the objective or lens, so it moves with the objective or lens during the stack. Properly placed, it will keep the depth of water between the objective and subject at exactly the ideal amount, thus letting me use higher NA to achieve higher resolution (lowering the tolerance width). Unfortunately this will limit stacking depth so that the boat doesn't hit the subject, though. That limit would be the correction depth (4.8mm for these lenses) + half the tolerance width. But that's acceptable for my subjects. I already made the coverslip boat, a five-sided cube made out of coverslips, but for Four Thirds lenses. It won't work for MFT lenses because their working distance is less than the length of a coverslip. I'll have to build a new boat with the side coverslips cut down to about half their height. These are really tough to make watertight with perfect perpendicularity. I'll describe the construction technique later. It is based on using a glass cube with bevelled edges as a form for the coverslips.

I recently snagged the only Mitutoyo G Plan Apo I have ever noticed on eBay, corrected for 3.5mm of glass. I'll apply my "boat" idea to this, so I can image things a few millimeters tall with NA = 0.50!!!

The camera body is my FF S1R. It doesn't have a thick sensor filter pack. For my medium-format tube lens, I could also use my Pentax K-1 with filter pack removed. But this isn't a limiting parameter on that end of the tube lens; the lens has an exit pupil far from the snesor and has a relatively small aperture.

By the way, I really like using these medium-format lenses as tuibe lenses, with commercially-available shift adapters. When used with reversed camera lenses with big FOVs, it is very easy to do small sensor-shifted stitches.

There is even a very cheap Mamiya medium format zoom (I got one for $80) which is usable on FF without vignetting at the high end of its zoom range. There is a huge amount of copy variation on that lens though. But it is cheap enough that you can play roulette with it painlessly. I don't think it would be great on APS or MFT though. On MFT, a FF zoom is usable, and in fact my sharpest MFT tube lens is a cheap old Nikon ED-IF zoom.
Lou Jost
www.ecomingafoundation.wordpress.com
www.loujost.com
Top

love these kind of experiments, and also the idea of draining the water to keep the height constant.

not likely that I'll get involved into underwater microphotograpy anytime soon, but following this with interest!
chris
Top

Great work!! Like the very creative thinking with the reversed lens and filter plate compensation

Could you use a front lens filter for your boat, like a UV or haze filter? May have to seal the edges so it doesn't leak.

Thanks Mike. A filter would work for some subjects but is too thick for some of the subjects I work with, so I'd like to try the coverslips first.
Lou Jost
www.ecomingafoundation.wordpress.com
www.loujost.com
Top

Everything presented here makes sense in photomacrographs of amber inclusions.


Lou Jost wrote: I recently snagged the only Mitutoyo G Plan Apo I have ever noticed on eBay, corrected for 3.5mm of glass. I'll apply my "boat" idea to this, so I can image things a few millimeters tall with NA = 0.50!!!.

I look forward to seeing the results of this objective.

According with the manufacturer's manual, there are only 20x and 50x versions. Too bad, they are too much for using it in photography of amber inclusions.
Unless use the 20x with a shorter tube lens.

Let's wait for the results.

I'm also interested for imaging subjects in higher-RI gems like quartz or sapphire which often host beautiful mineral inclusions. Too many projects on the stack right now, but someday!
Top

Everything presented here makes sense in photomacrographs of amber inclusions.

Solid media are much harder (no pun intended) than liquid media, because you are stuck with a set thickness of media. I know that people immerse their amber inclusions in liquid media with similar RI, and that would open the way to using the method I've described here.


According with the manufacturer's manual, there are only 20x and 50x versions. Too bad, they are too much for using it in photography of amber inclusions.
Unless use the 20x with a shorter tube lens.

Yes, that is too bad. However, the image circle of my 50x is very large. I should be able to push it down quite far.
Lou Jost
www.ecomingafoundation.wordpress.com
www.loujost.com
Top

What is the aperture of the lens converted into NA for your setup?

The easiest design to get watertight might be a dipping cap design. A turned metal or plastic cylinder (there might even be a suitable thread available in the back of the lens) and the cover glass cemented in with canada balsam or UV cement: http://www.microscopy-uk.org.uk/mag/ind ... arke2.html

Thanks Icthy. I want complete transparency though, so that subject lighting is not affected.
Lou Jost
www.ecomingafoundation.wordpress.com
www.loujost.com
Top