Here's a snail from the same population as the ones that I harvested to get the radula shown at https://www.photomacrography.net/forum/ ... hp?t=40601 . 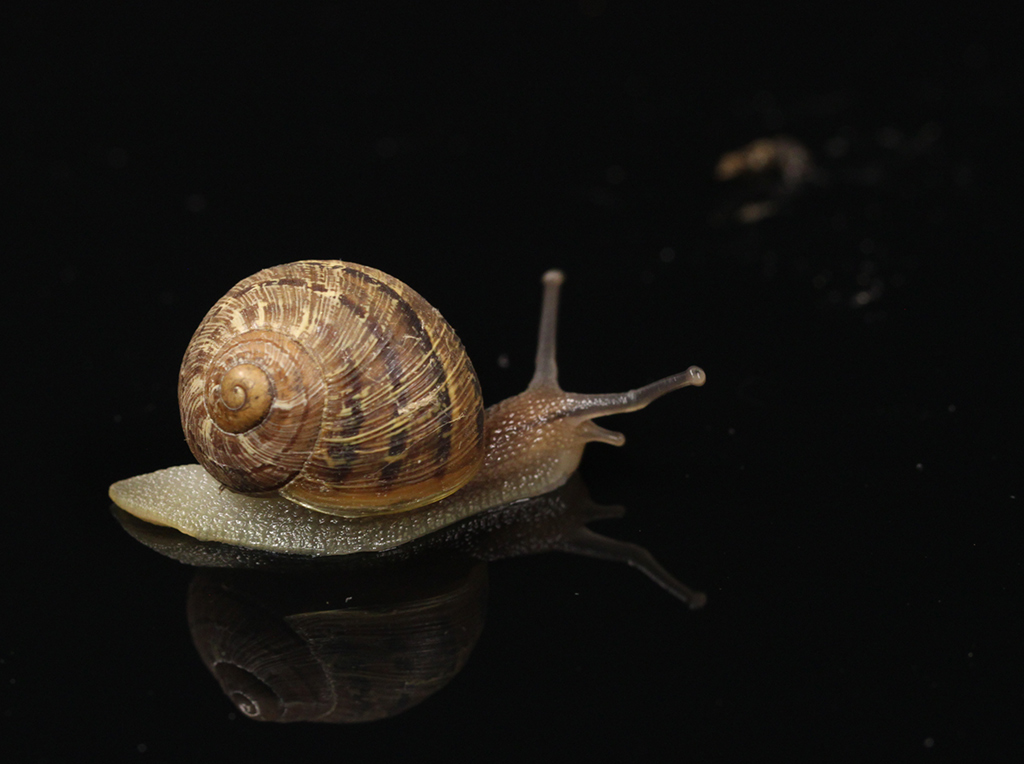 I do not know the species of this snail. It's a non-native invasive.

Mostly this shot is just to document the type of beast that contributed the radula.

But there are a couple of aspects that did intrigue me.

First is that although the snail moved around as usual over the plastic sheet, it did not leave any slime trail -- none at all. In the image as shown, the snail has moved in a large circle starting at the debris upper right and moving counterclockwise about 270 degrees to its current position. You can't see any slime trail in the photo, and even on close inspection I couldn't see one on the plastic. Reflections of the ceiling lights were completely undisturbed, still looking as if the plastic were freshly washed. I assume this says something about the properties of snail slime, but exactly what, I have no idea.

Second relates to the reflection of the snail. When preparing the image for posting, I was struck by how bright is that little spiral in the reflection. Best I can figure, that's a specular reflection of a lighting panel on the ceiling. Looking directly at the snail, I get the feeling that the whole center turn of the shell is quite shiny, and I guess the bottom of the groove was at exactly the correct angle to make that bright reflection over the whole 1+ turns. Other pictures in the same session show bright reflections in the same area, but none of them show the whole turn this well.

Thanks for the interest. That's definitely one good possibility.

There could be 10 to 15 or more invasive species in Western Washington, along with a similar number of slugs.

The exact number of different species is unknown because snails and slugs in the Northwest are not well studied.

I'm in Eastern Washington, the dry side, which I suppose cuts way down on the number of possibilities. But I don't know what those possibilities are. All I really know is that up until a couple of years ago our garden did not have these large snails, although my parents' house a couple of blocks away had lots of them. At the time I asked a fellow at one of the nurseries about them. His comment was that "There are two kinds of yards in the Tri-Cities: yards that already have giant snails, and yards that are going to have them." So it was no great surprise when they finally turned up.

Allow me to correct a spelling error.
The name of the species is aspersa (not aspera).

It might also be usefull to add that there is an ongoing dispute about the correct nomenclature. The creature might be presented under different names: Helix aspersa (most used), Cornu aspersum (preferred by most researchers), Cryptomphalus aspersus and Cantareus aspersus, depending of the age and the nationality of the author.

At first I could not find it in my Danish field guide because the author preferred the use of Cornu instead of Helix.

The snail has its origin in the Mediterrainian area and has been introduced in many countries around the World (including Denmark) for culinary reasons. Since the ongoing climate changes make our climate more like the former Mediterranian the snail is now spreading more easily in northern countries.
Troels Holm, biologist (retired), environmentalist, amateur photographer.
Visit my Flickr albums
Top

Hi, it really looks like a Helix sp, the common species of the Mediterran coast, the area where I live, in a nearby city the "aplec del cargol" is celebrated every year, during a weekend about 200,000 visitors cooked and consumed 13 tons of these mollusks!

Perhaps the reflections you mention are due to the crystalline structure of the material that makes up the shell, in many photos of snails appear very strong specular brightness, as if it came from micro-mirrors.

Simultaneously interesting and beautiful!
The trouble with quick and dirty is that the dirty remains after the quick is gone.
Top
Post Reply Previous topicNext topic
6 posts • Page 1 of 1