The game continues, trying to find out what these balloons really are and do.

I was recently at a conference where I had an opportunity to ask several entomologists if they knew, or if they knew who might know. That effort produced a few leads to other people.

One of those other people suggested to me that we might be looking at wax extruded from cuticular surface lipid pores. He sent to me a paper regarding extrusions of waxy material on the abdomen of a neuropteran.

I thought the idea that the balloons are actually wax extrusions made great sense, and in my naive enthusiasm I thought that would be easily demonstrated by simply washing away the wax using solvents. The neuropteran article described collecting the waxy material by washing the adults in hexane and/or chloroform. I don't have hexane or chloroform, but I do have a range of other solvents including xylene, acetone, and one of my favorite oil-and-grease solvents, Gumout carb & choke cleaner.

So, I plucked an old dusty BMSB (brown marmorated stink bug) from my limited collection of such things, expoxied it to a balsa stick, and photographed a few areas to make "before" pictures. Then I dripped Gumout over the specimen for a minute or so. Quick inspection through a dissection scope showed (to my surprise) that the balloons were still there, so I repeated the process with acetone and then with xylene. After a final drying, I put the bug-on-a-stick back under my camera and re-photographed one of the areas I had shot earlier.

To my complete surprise, here are the results: 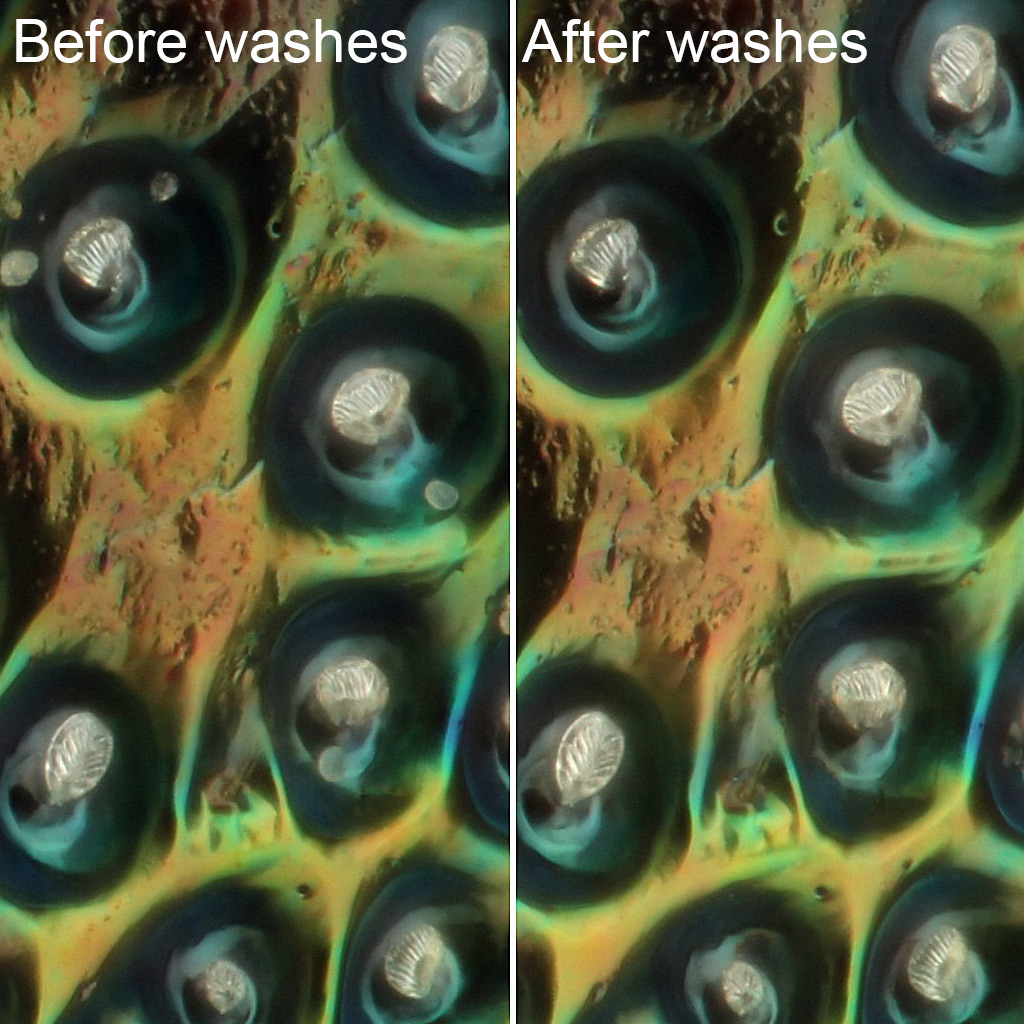 As you can see, while there's less debris after the washes, there's essentially no change in visual appearance of the balloons.

I don't quite know how to take this result. I did run a quick sort of "due diligence" with the solvents, using some woolly aphids that happened to be flying this afternoon. Sure enough, the fluffy wax on their abdomens disappeared instantly when confronted with xylene and acetone. If these BMSB balloons are wax, then clearly it is some much more resistant material than the aphids are using.

Any thoughts will be most appreciated.

Edited to add: A different article suggests dewaxing in a 50/50 mixture of xylene and isopropyl alcohol. 10- and 5-minute washes in that, with a 45-minute soak in between, had no effect either.
Last edited by rjlittlefield on Tue Oct 29, 2019 12:56 pm, edited 1 time in total.
Top

I have been following this topic with interest, never had any idea what they are!
The wax angle sounds reasonable; how about wax-dispersers?
NU.
student of entomology
Quote – Holmes on ‘Entomology’
” I suppose you are an entomologist ? “
” Not quite so ambitious as that, sir. I should like to put my eyes on the individual entitled to that name.
No man can be truly called an entomologist,
sir; the subject is too vast for any single human intelligence to grasp.”
Oliver Wendell Holmes, Sr
The Poet at the Breakfast Table.

As a bona fide entomologist maybe I should weigh in here, although I'm more of a taxonomist than sensory biologist.
Would say they are mechano-receptors, as a balloon shape does not make much sense for a chemo-receptor. A chemo-receptor wants a lot of surface area to volume ratio, so a long thin rod is better than an almost sphere-ish ballon. They are also thin walled and apparently air-filled, and chemo-receptors are relatively thick walled with pores and fluid filled to relay the olfactory stimuli to the receptor cell. They need the fluid to have proteins outside of a cell membrane that can target specific molecular shapes, present them to the sensory neurons cell membrane for detection, and also for enzymes to degrade the molecules to stop the signal when the smell is no longer present.

With a thin base like that it makes me think they can swivel around in their appropriately sized divot, and looking at the pictures it seems to be the case. One of the SEM shots show them all bent forwards for example. I have no idea why they specifically should be balloon shaped to do the job, insect morphology is absolutely littered with strange and quirky shapes. Makes me question our current understanding of evolution sometimes...


Then I dripped Gumout over the specimen for a minute or so. Quick inspection through a dissection scope showed (to my surprise) that the balloons were still there, so I repeated the process with acetone and then with xylene.

They are certainly not some kind of extrusion, they are far too regular to be, as well as them having an internal structure or hollow insides. And they wouldnt be able to be balloon shaped if extruded from a narrow point. And yes, most if not all of your solvents would have instantly dissolved them away.
Top

Thanks for the further comments and discussion! I pleased to hear confirmation that the balloons are not themselves composed of wax.

I think we need to be a little careful about the filling. It seems clear from the images that the structures are thin walled and filled with something that can be either withdrawn or evaporated. I don't think I'm equipped to figure out that level of detail, but maybe somebody else can manage it.

This is a very interesting topic and the images are excellent.

I have pondered this and have this to offer. The SEM images Rik linked are quite interesting. They show a lot of the structure, but the sputtered metal to allow the SEM may be a bit thick. The images Rik found were more of a survey of SEM capability than a study of the balloons. I suspect better SEM imaging is possible.

I read about the methods used to make these SEM images, and also about standard SEM techniques for bug imaging. The washing that is done prior to cryogenic dehydration for SEM would probably remove all waxes etc. I am not surprised that these balloons survived Rik’s washing.

I then looked at the numerous stink bug and shield bug images posted on this site. The distribution of the ”pits and balloons” is similar on green shield bugs and BMSBs. But the wide distribution over the bodies did not suggest a specific function.

There was one image of a stink/shield bug with short bristles that stuck out of the pits. Sort of a hairy stink bug. So that leads me down a path of thinking that the balloons are vestal bristles. Bristles on insects serve many purposes. They can be tactile sensors, and some sense chemicals (smell/taste).

My guess is that the balloons are tactile sensors measuring air flow during flight. They appear during the adult phase, not on the previous flightless juvenile instars. They would have low drag.

I've gotten a couple of questions about exactly how the images were shot.

The configuration is pretty ordinary for high magnification work. Illumination is by two main flashes diffused through a cylinder of paper wrapped around the objective and specimen, optically triggered by a third flash that is cabled to the camera hotshoe. Mitutoyo M Plan Apo objective, Raynox DCR-150 tube lens, Canon T1i camera, all mounted on a repurposed Olympus microscope stand with a StackShot motor attached. Subject is epoxied to a small stick of balsa which is easy to pin through for coarse posing. Positioning stack provides micrometer control for X, Y, and two tilt axes (one by goniometer, the other by rotary table).

There are no polarizers or color enhancement; the images show what the bug looks like up close in bright light. 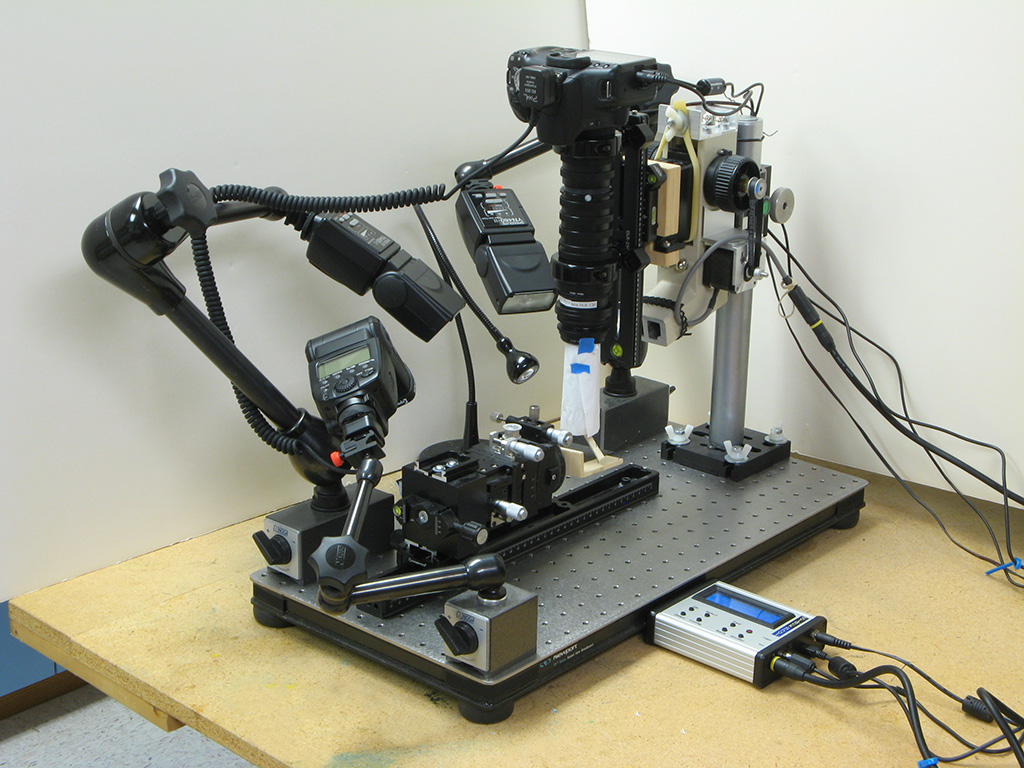 There's an M42 variable tube in the section between the two tube clamps; loosening the upper clamp allows the camera to rotate for portrait vs landscape. Loosening the Arca clamp on the focus block allows the rail holding the camera and lenses to be withdrawn for changing objectives and manipulating the specimen. Another Arca clamp on the rail provides a hard stop that gets the rail back to exactly the same place after adjustment. 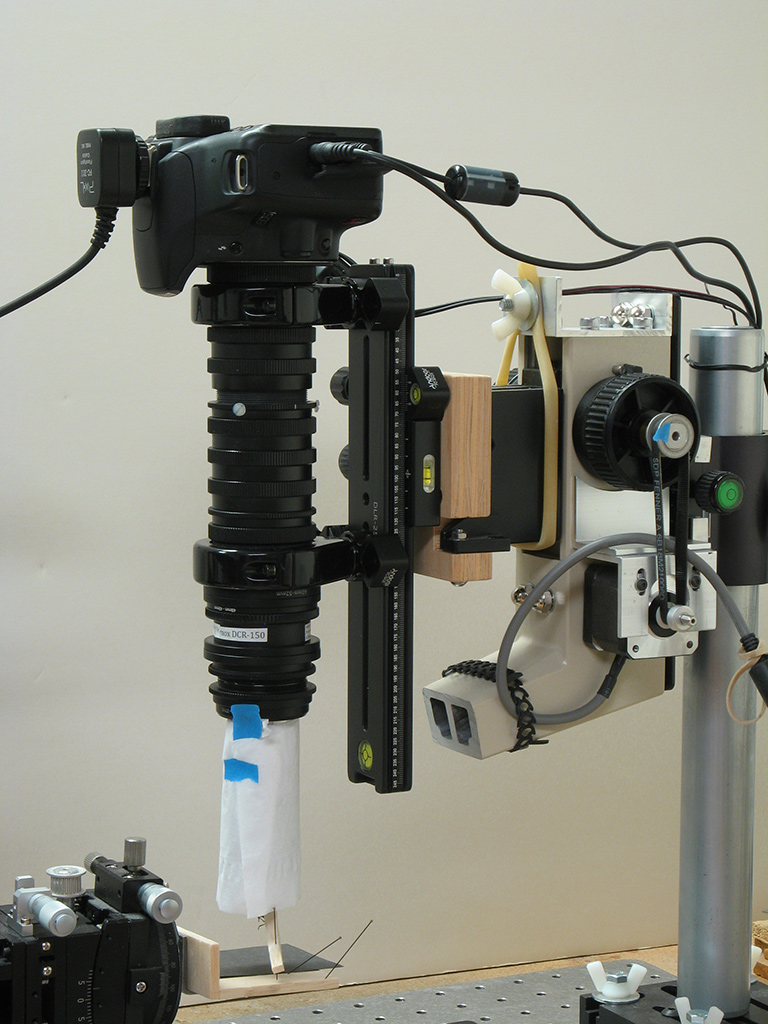 Here I've lifted up the camera and lens assembly so you can see the bug in position. The Jansjö light is turned on for this. 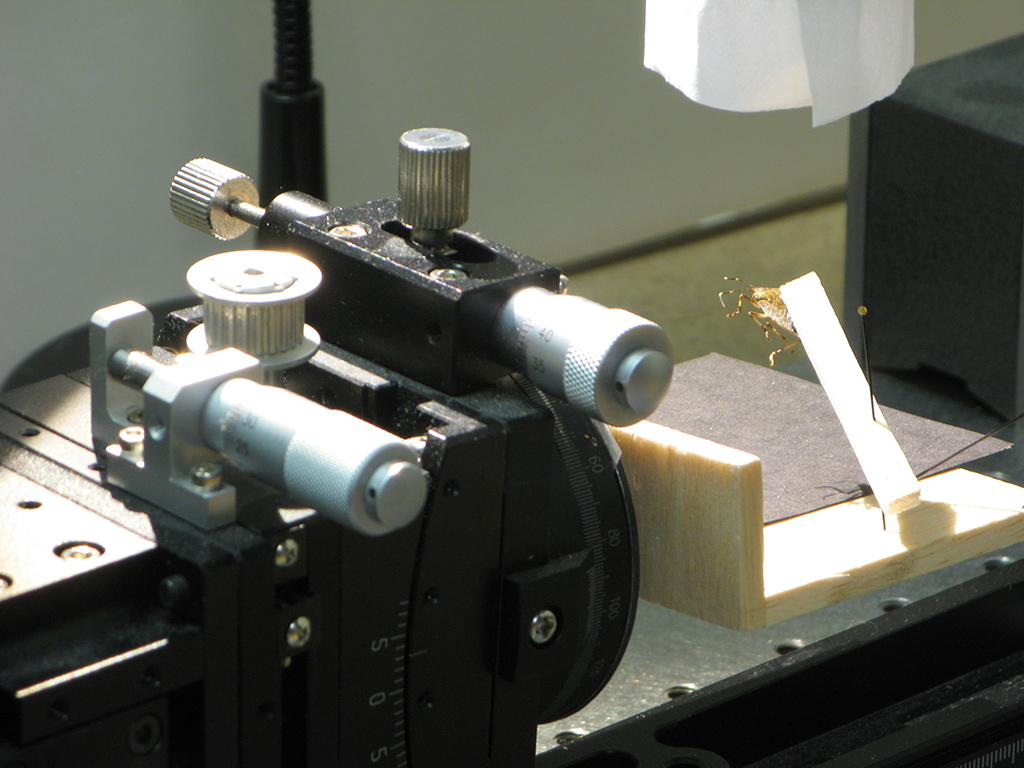 Setup is done in Live View with illumination by the Jansjö; aperture priority mode gives exposure simulation. Shooting is done in manual mode at 1/200 second, ISO 100, with the flashes dialed back to about 1/16 power. No need to turn off the Jansjö or room lights when shooting because they're too dim to register; turning off the triggering flash provides a convenient way to get a black frame to mark the start and end of an actual stack.

he does discuss stink bugs, no time now to read through it!

I have just now finished reading this book, front to back.

I found nothing in the book that seems immediately relevant to the balloons in pits. According to Eisner, adult stinkbugs exude their defensive fluid through two glandular pores on the ventral side of the thorax, while nymphs exude through dorsal pores on the abdomen, in areas that would be covered by wings in the adult.

But the book is a masterpiece -- thanks for the reference!