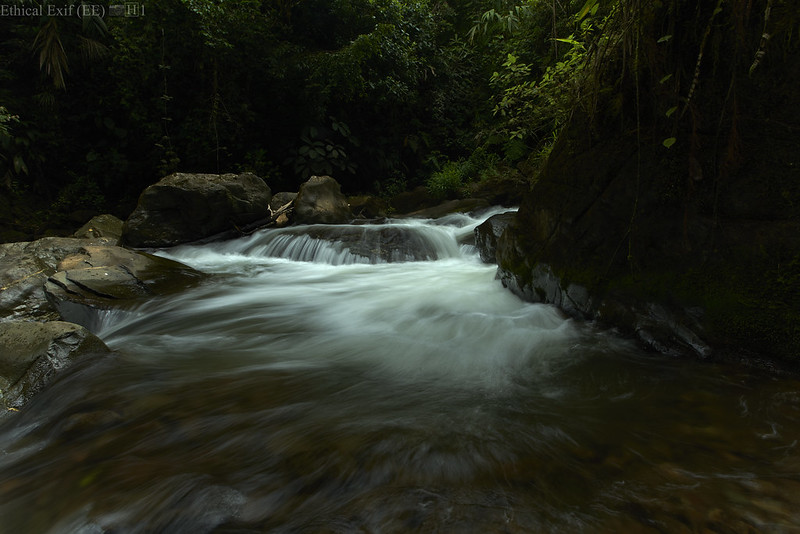 Ectatomma ants harvest sugars at floral nectaries, as well as in developing pre-blooming spikes on this ginger plant, a common garden ornamental in many rainforest gardens. 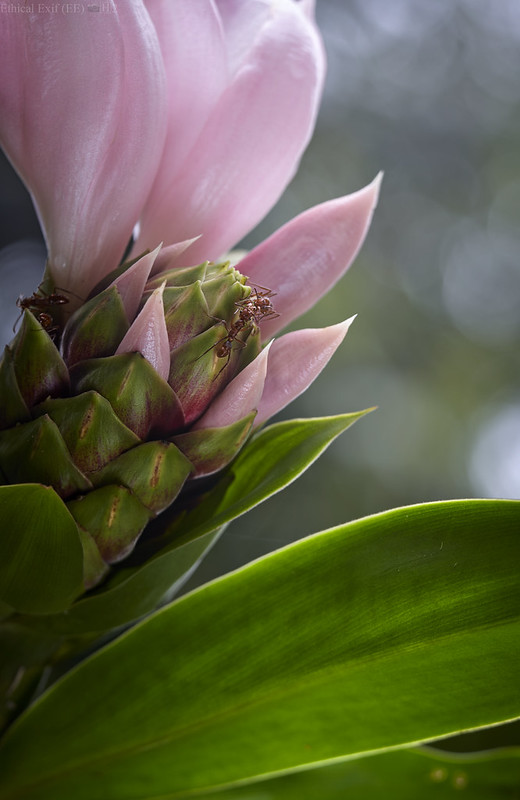 A treehopper (Notocera sp.) is one member in the bizarre membracid family. Their pronotal ornaments (seen here as two backwards arching horns) have diversified into a baffling variety of forms. 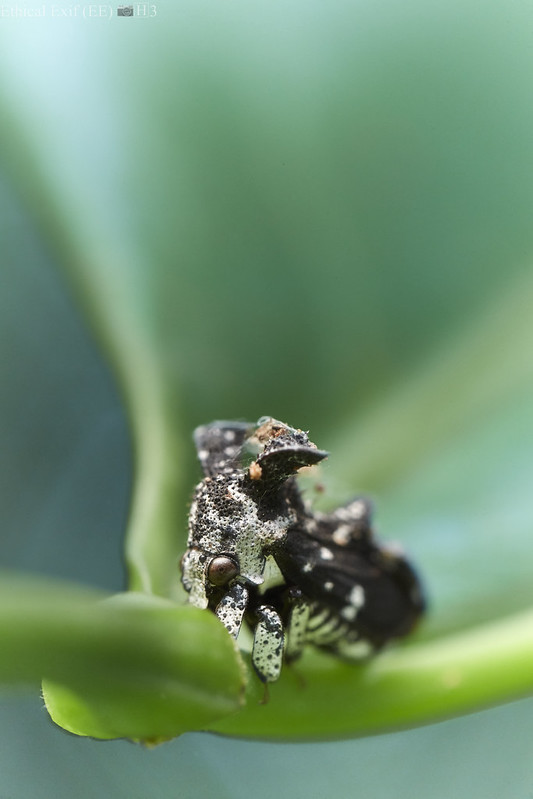 A spider wasp (Pompilidae) has the rather gruesome habit of biting through the legs of its paralyzed spider prey in order to maintain the spider's immobility as it plays host to the eggs which will be subsequently deposited: 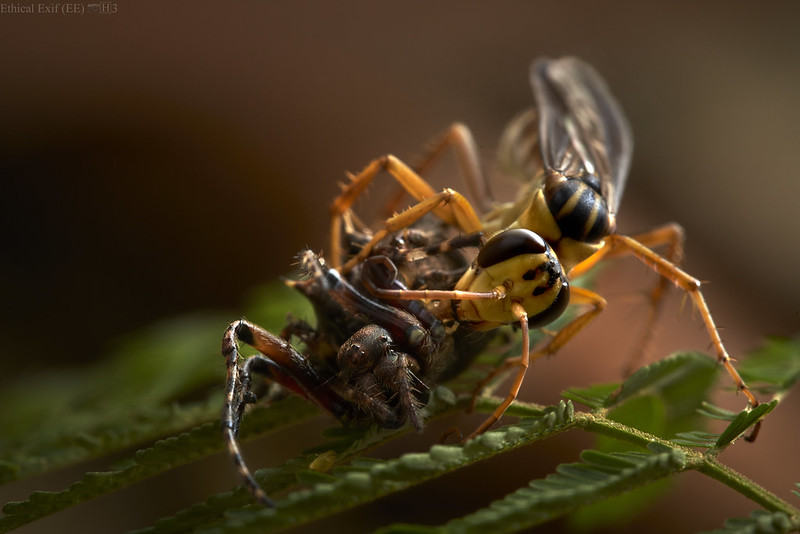 [/url]Spider wasp (Pompilidae) with orbweaver by Paul, on Flickr 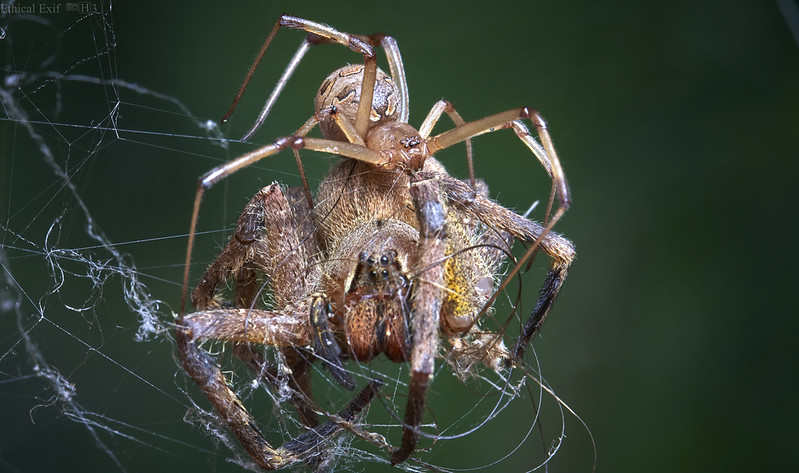 Come night, a variety of bizarre caste of characters emerges: 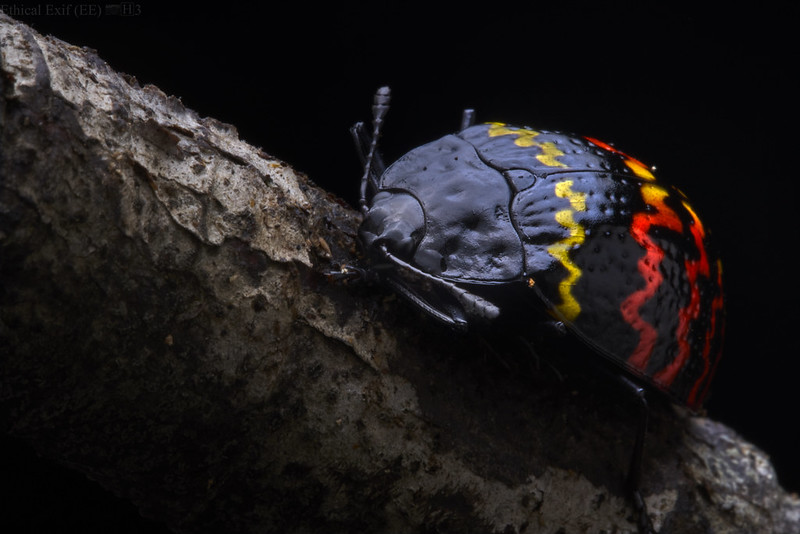 A net-casting spider (Deinopidae) hurls its web which is not "sticky" in the typical chemical/glycoprotein sense, but rather is made of cribellate silk, pulled from thousands of micropores in a specialized plate and combed into fuzzy texture which uses a combination of physical entanglement on the nano-scale, Van Der Waals and electrostatic forces: 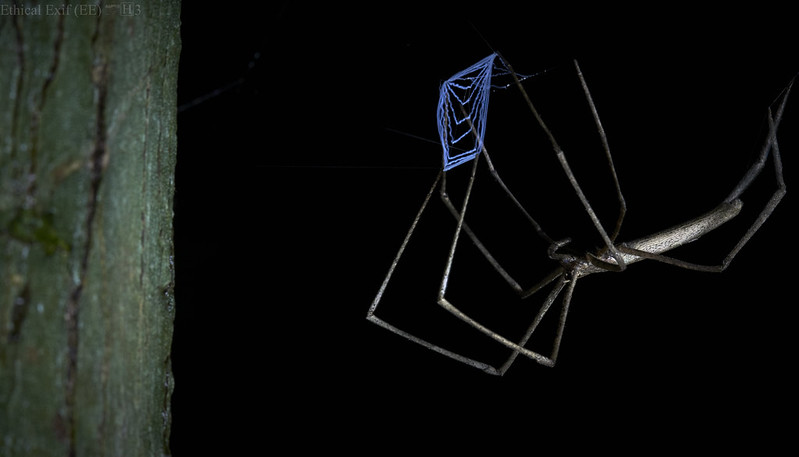 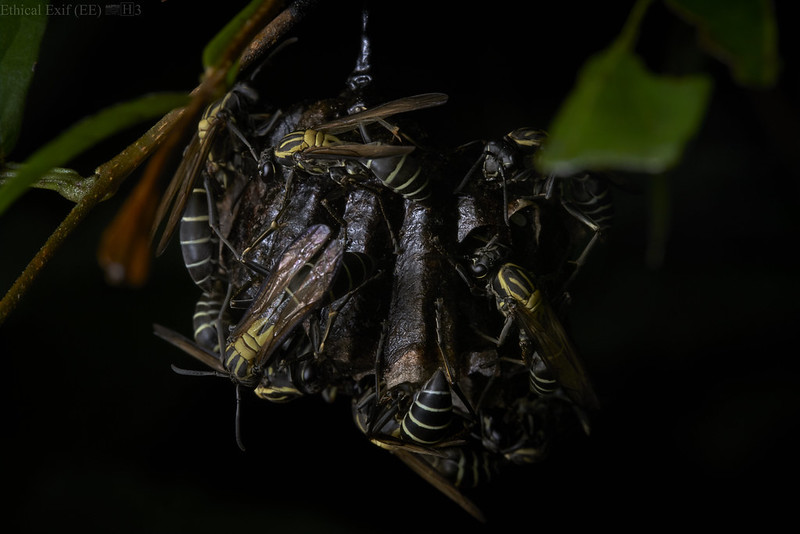 A female katydid with its blade-like ovipositor cuts between the lamina of a leaf to deposit its eggs: 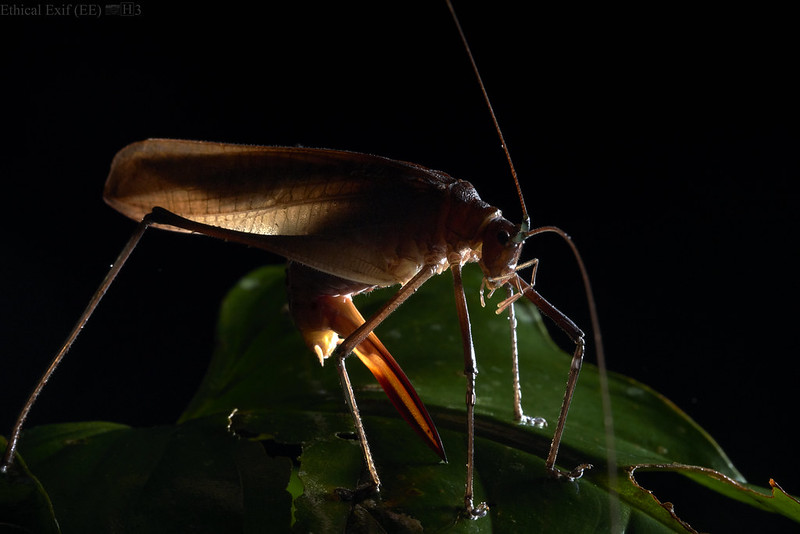 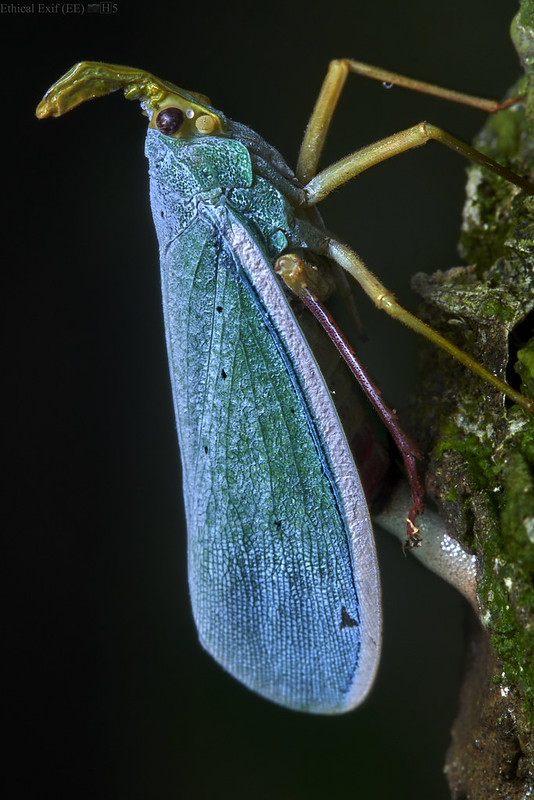 A stink bug (Edessa sp.) laying down a line of eggs: 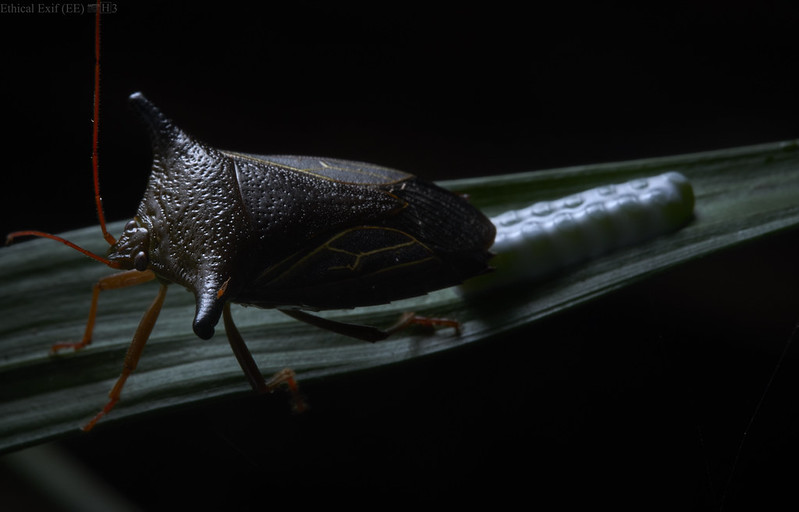 A monkey frog (Phyllomedusa sp.) asleep during the day, is seen here at full stretch as it navigates between branches in the understory: 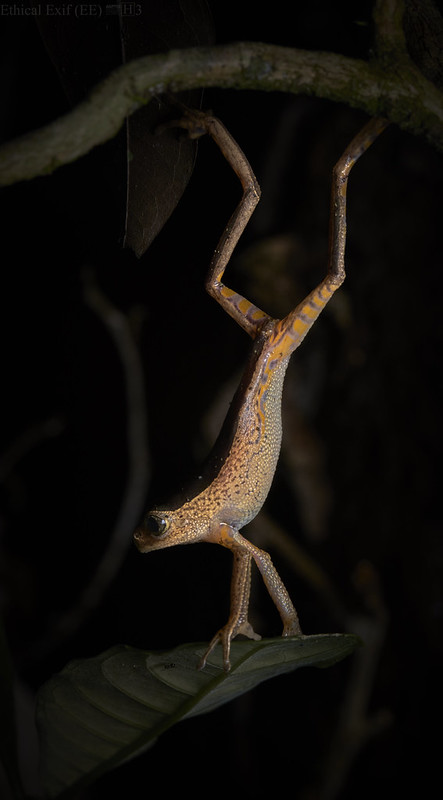 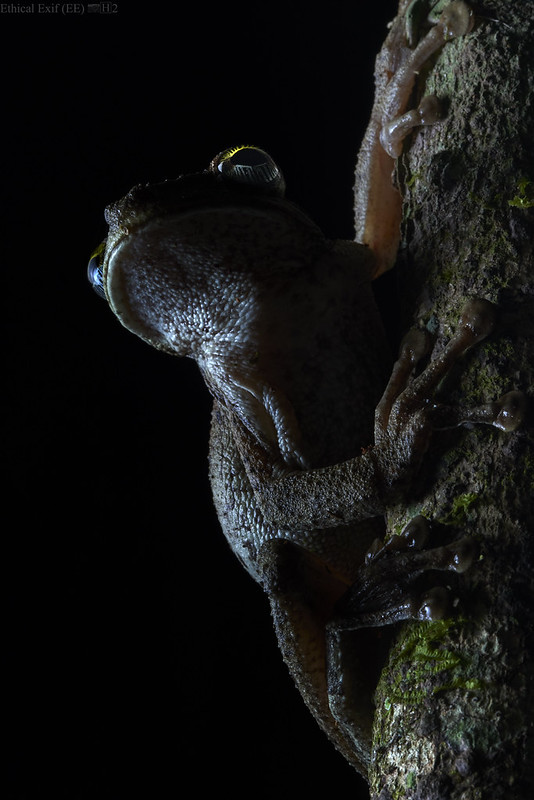 The protection of these developing eggs by these Pseudomyrmecine ants is a byproduct of the mutualistic relationship between the Tangarana tree which provides food and housing, and the ants. Generally the ants are able to remove pretty much any potential threat to the tree (except perhaps some subversive hemipterans). The gelatinous egg mass poses either a physical or chemical deterrent to their removal. Thus the frog eggs seem to have managed to exploit the ant/tree relationship, though not at the expense of either partner. 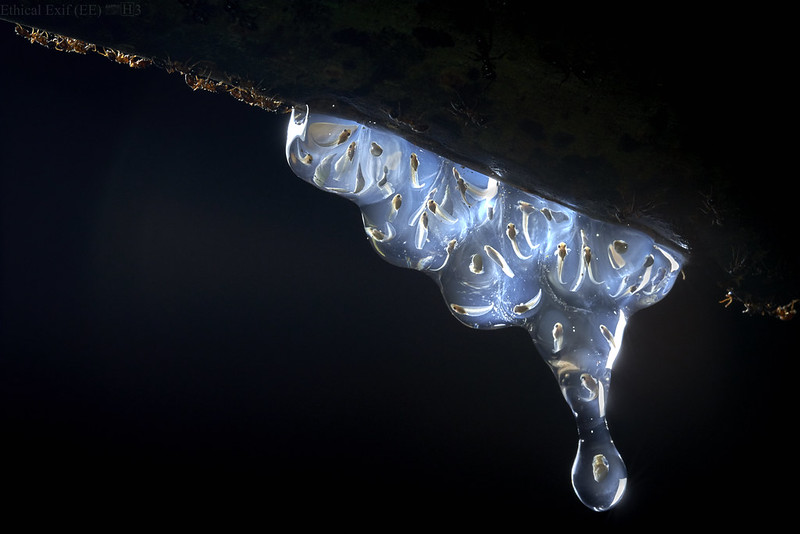 Those frogs and the backlit spawn are lovely, a great set I always imagine the rainforest must be like a smorgasbord for macro photography.
Top

aveslux wrote: I always imagine the rainforest must be like a smorgasbord for macro photography.

I am tempted to add:
Just remember that most of the servings are done in the dark night, and you need a knife called deep knowledge and a fork called hard work.

I have joined a few days walking in the famous Costa Rican rain forrest, and I discovered nothing like this for my macro lens.
Troels Holm, biologist (retired), environmentalist, amateur photographer.
Visit my Flickr albums
Top

Wonderful images and narrative. You really enlighten the beautiful world of live macro

Thanks everyone, much appreciated.

The rainforest is many times a lottery, with some days appearing completely devoid of activity, whilst others, one can hardly go a few steps without finding new and interesting finds.
Paul
https://rainforests.smugmug.com/
http://www.flickr.com/photos/31137609@N08/
http://pbertner.wordpress.com/
Top
Post Reply
7 posts • Page 1 of 1