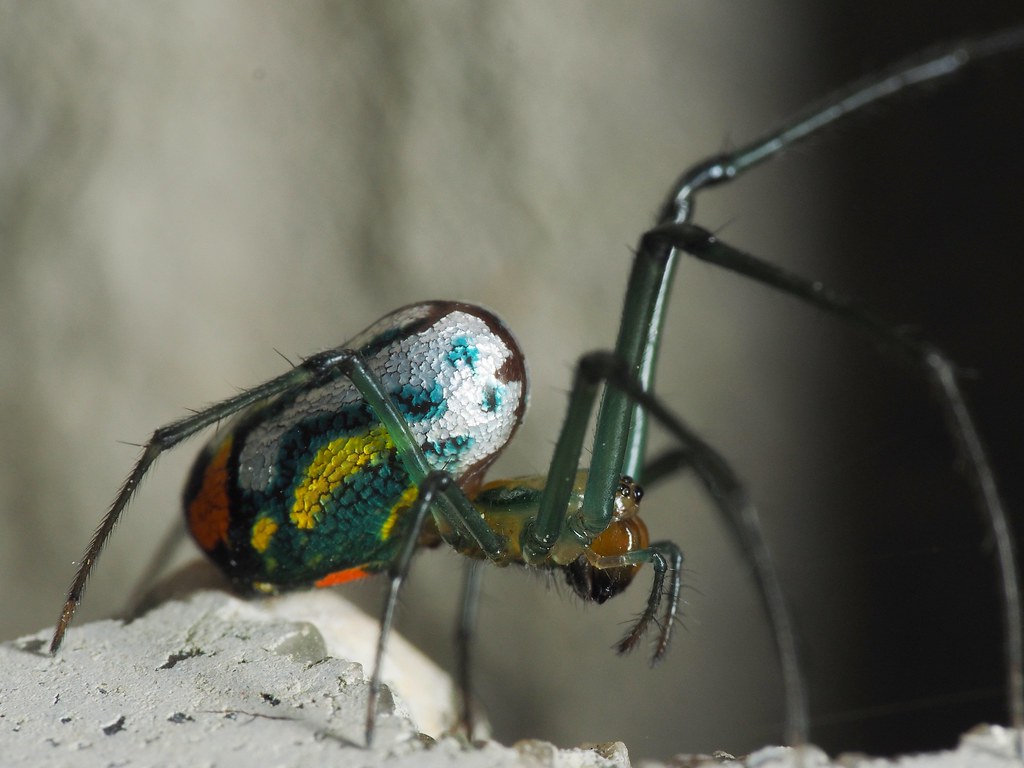 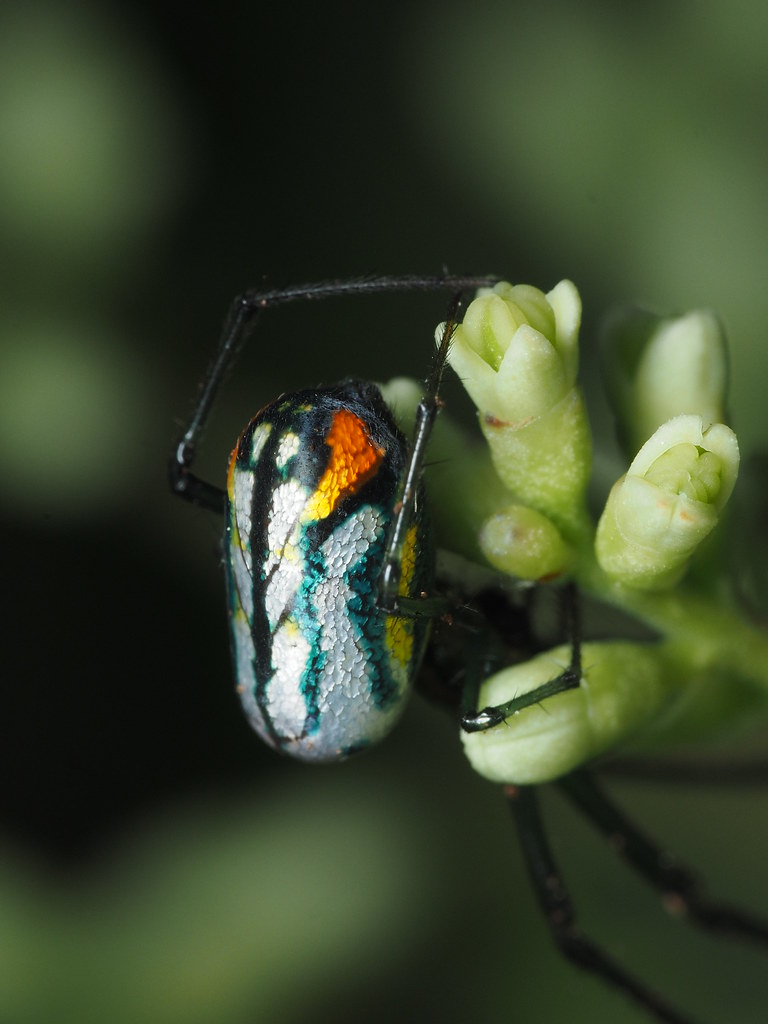 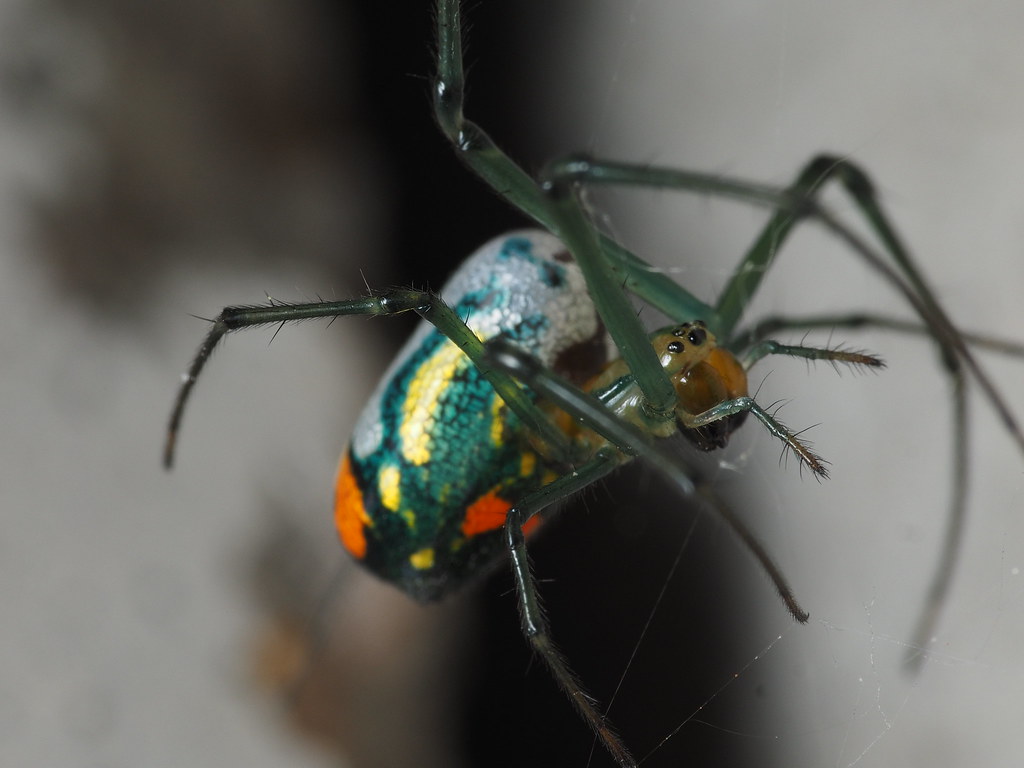 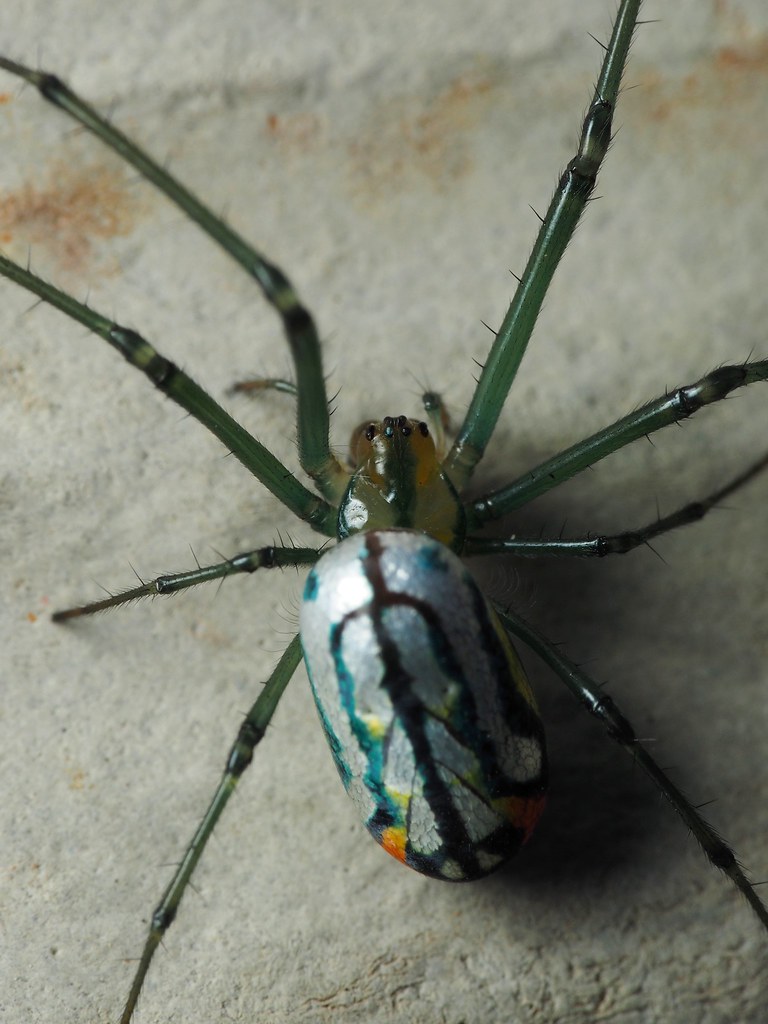 Magnification on sensor is about 1.55x. Longest dimension of the sensor is abut 17mm (sensor is micro four thirds).

Those color elements look like scales.The inner upper back of the spider has less such scales. Color patterns are almost perfectly symmetrical.

I chased this spider for 90 minutes, but it almost never stopped for a well lit pose. Eventually I lost it, after a phone call from my wife

This looks like one of the "orchard spiders" in genus Leucauge, possibly what BugGuide calls Leucauge argyrobapta.

According to https://en.wikipedia.org/wiki/Leucauge, "research in the year 2010 resolved L. argyrobapta as a synonym of the quite common L. venusta", but BugGuide stlll shows them as separate (and with quite different appearance, to my eye).

The article article referenced by Wikipedia has more of the story.

Wow, thank you very much, Rik! I will acknowledge your ID in my Flickr.

Any idea if it is a male or female?

So it is a common back-yard orchard spider species in the tropics.
Top

Common in lots of places, I think.

I gather the range extends a lot farther south also, since the article referenced by Wikipedia says

Their research, published last year in the journal Zootaxa, revealed that L. argyrobapta is a “common, backyard species” in the tropics, says Dr. Hormiga. And when they compared it under the microscope against another species in the same genus, the run-of-the-mill North American orchard spider (known by the scientific moniker Leucauge venusta), they realized just how common this species is: The two are exactly the same.

“That’s the species I have in my backyard,” Dr. Hormiga says. And that goes for just about any backyard in the D.C. area and throughout the city’s expansive Rock Creek Park. “It was really just hard to believe in the beginning, to be honest, that it’s so widely distributed,” says Dr. Dimitrov. “But it seems that is the case.”

The thin and simple structure of the pedipalps suggest to me that this is a female. But I have not studied the group so I don't know for sure.

If you credit me with the ID, please be sure to retain the flavor that this is a best guess and not definitive.

Thank you very much, Rik. I have changed all photo descriptions per your request.

Oops, I have that book, but totally forgot to use it

You should change "Orchid" to "orchard" in the title though, following Rik's note.
Lou Jost
www.ecomingafoundation.wordpress.com
www.loujost.com
Top

Just did. Thank you Lou. And sorry about that; shamed on me being a half biologist but cannot spell most species names correctly

Oh, my those are beautiful. I have seen many of these, and photographed them often. But these are the best pictures I have seen of them. Very well done!
I do not know, but my guess about the color pattern on the abdomen is that we are seeing individual cells, each with pigments. Some of the pigments are iridescent.
Mark Sturtevant
Dept. of Still Waters
Top

MarkSturtevant wrote:Oh, my those are beautiful. I have seen many of these, and photographed them often. But these are the best pictures I have seen of them. Very well done!
I do not know, but my guess about the color pattern on the abdomen is that we are seeing individual cells, each with pigments. Some of the pigments are iridescent.

Thank you very much, Mark. I "sprayed and prayed" during the 90 minutes I spent with that spider and had some beginner's good luck. I did find it difficult to keep spider's eyes and abdomen all in focus, even with f/22 on micro four thirds sensor. Most of my photo have either eyes or abdomen in focus, but not both; they are mostly in focus, only when the spider turned its head sideways or lay perfectly flat.

Here is a photo showing the abdomen pigments. I could be totally wrong (and I know nearly nothing about spiders), though the photo seems to show some scale like color feathers that seem to attached to body surface (they seem to give the illusion that those feathers can be peeled off?). 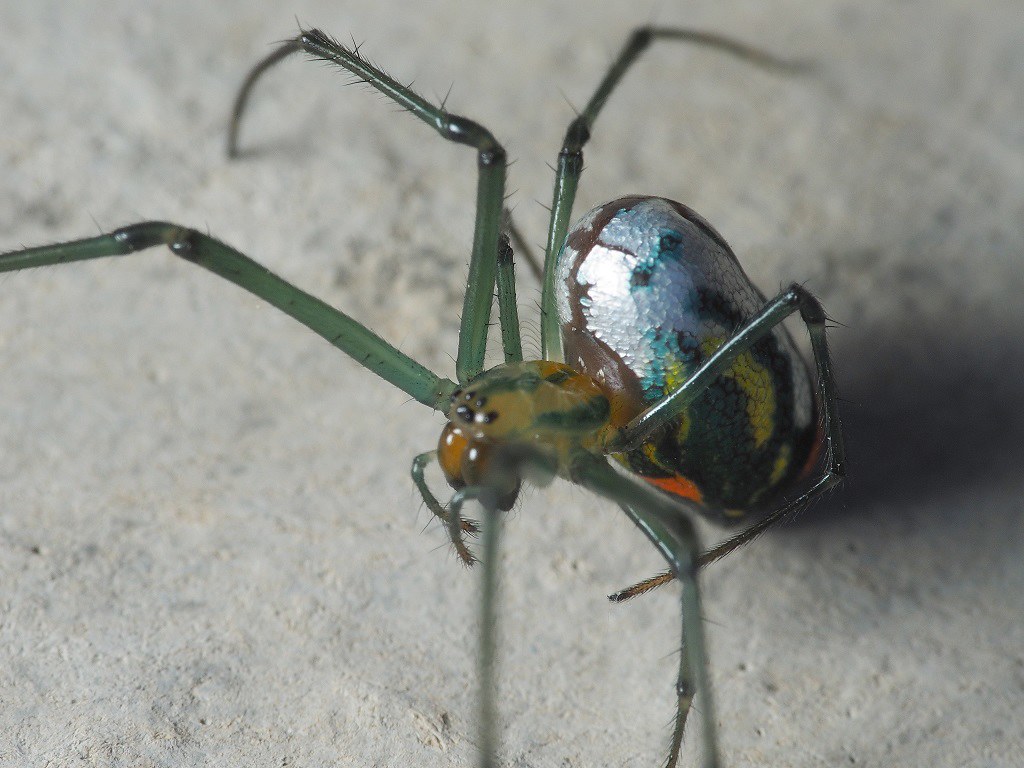 If you click on the image, you should be able to see original full res image and zoom in on those "feathers". Please kindly correct/educate me, if I am mistaken.
Top

From these pictures, and some pictures I have, I think the abdomen of these spiders includes a thin layer of very fine hairs on the outside, a thin and transparent cuticle, and then these strongly pigmented bodies underneath the cuticle which might be individual cells. In that sense these 'bodies' remind me of the pigment cells seen in the skin of squid. Squid skin cells include iridescent cells called "iridophores". A big difference of course is that squid can rapidly expand and contract their pigment cells and this is how they change color.

In the spiders, these bodies (cells or whatever) will be three-dimensional, and so they will show highlighted edges like any 3D object would. Seen thru the transparent cuticle, which is hard to see as it is transparent, the pigment bodies can wind of looking like flat 3-D objects on the surface. I don't think these can be surface scales since then they would sometimes turn up missing because of wear and tear.

One thing I really like about these spiders. which shows beautifully in these pictures. is how the abdomen looks like antique porcelain with iridescent glaze.
Mark Sturtevant
Dept. of Still Waters
Top

Thank you very much, Mark, for sharing your knowledge. Do you happen to know if those pigments are structure colors and do you provide any biological advantage for the spider?
Top

With those thin palps it's a female for sure.

The silvery facets are actually inside the animal, underneath it's transparent skin. I dont think the individual silvery "divets" are cells, they are far too big, they are probably guanin mirrors which is used as a silvery back light (much like in octopi and lots of other animals). Either on their own or overlaid with different pigments to produce brilliant colours.
Top

I can certainly go along with them being something other than cells. But big cells are not that unusual.
Iridescent colors are structural colors as far as I am aware. As for a possible function to all this color, I have no idea. Males are similar to females (though smaller), and I expect they do need to recognize each other. So maybe something in that area.
Mark Sturtevant
Dept. of Still Waters
Top

This is a stunning photo!
www.anvancy.com