How do you calculate EA on stacked lenses?

How do you calculate EA on stacked lenses?

EA depends on the apparent width of the limiting aperture, as seen by the sensor. If the limiting aperture is the one in the rear lens, then the front lens has no effect on EA. In your example, when the rear lens is focused at infinity and set on f/2.8, and the front lens is wide open, you'll still be at EA f/2.8. If you refocus the rear lens to its 1:1 setting, the EA will probably drop, but it won't go all the way from f/2.8 to f/8.4. Instead, it will drop only as far is if you were using the rear lens by itself, probably something in the range of f/4 to f/5.6 depending on lens design. 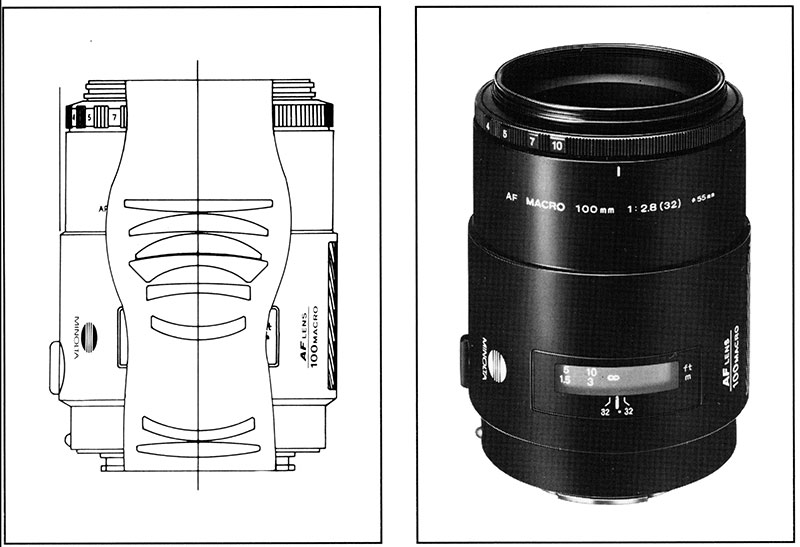 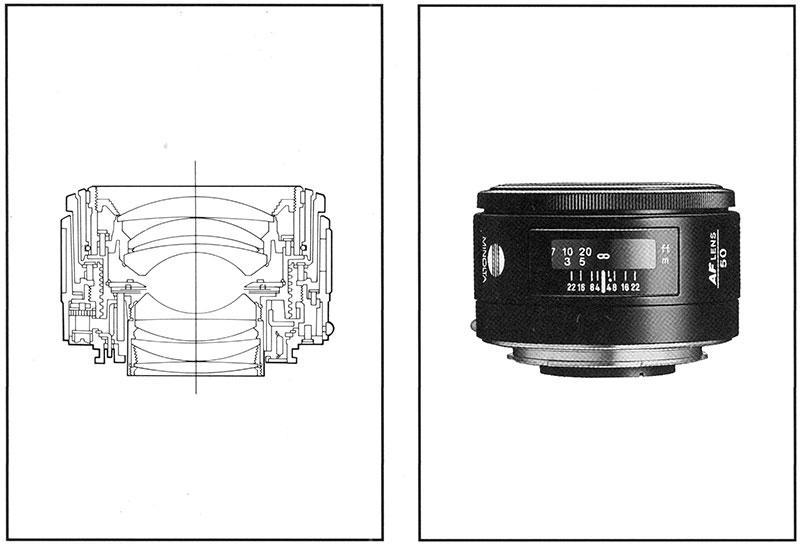 When focusing from oo to 1:1 front element in 100mm move forward and i guess (from exsposure difference) that its EA is 5 - which is quite not in order with EA=A*M+1 eqation?!

JohnyM wrote:When focusing from oo to 1:1 front element in 100mm move forward and i guess (from exsposure difference) that its EA is 5 - which is quite not in order with EA=A*M+1 eqation?!

I gather from punctuation that you're surprised by the mismatch between observation and formula.

Most formulas are exact only for simplified models and special cases. The formula that EA = A*(M+1) is no exception. It is exact for an ideal thin lens that is focused solely by extension. It is also exact for a realistic thick lens that happens to have pupil ratio = 1 and is focused solely by extension. For other lenses, the formula is only a useful approximation; careful measurements will show some deviations.

Most modern macro lenses do not have pupil ratio = 1 and do not focus solely by extension. Instead it is very common, almost universal, that focus will be accomplished in part by shifting the spacing of internal elements so as to shorten the effective focal length. The nominal value of 100 mm is correct at infinity focus, but at 1:1 it's probably more like 70-80 mm. You could find out by measuring how much the magnification changes when you add extension behind the lens, while leaving its focus ring set at 1:1. In that experiment, the relevant formula -- which does happen to be exact even for real lenses -- is that:

@Rik
That sounds about right, as attaching raynox dcr150 on 100mm 2.8 yelds only 1.8x which led me to belive that focal lenght changes on 1:1
Thanks.

@LouLost
Yes, i've been reading those threads as they evolved and they are really interesting but they are also a bit confusing to me. Especially the part where you've coupled 2x f2.0 lenses and then claimed it's an f1.0 lens. Now i understand that you were refering to F1.0 as... lets say new "nominal" aperture as EA is F2 in this case.

P.S: It is weird, but seems like reversed raynox give much, much, much better results.
Top

Now i understand that you were refering to F1.0 as... lets say new "nominal" aperture as EA is F2 in this case.

The devil is in the details. Yes, it may not be affected by diffraction, but it will be affected by other aberrations, especially chromatic aberrations, some of which can be removed in software but some will resist Photoshop's best efforts . So you have to stop down. There is no way to know in advance how much you have to stop down. It may be that you will have to stop down so much that you lose the advantage of coupling. Need to choose carefully, and optimize the aperture carefully too. And remember to test your results by actually stacking them, not just looking at the individual images. The common green/magenta colors in the out-of-focus areas can be disturbing in single shots but vanish in the stacking. And there are big differences in PMax vs DMap so look at both. Try using RAW files and processing them to remove CA before stacking.
Lou Jost
www.ecomingafoundation.wordpress.com
www.loujost.com
Top

It is weird, but seems like reversed raynox give much, much, much better results.

I think it is not weird, it is expected. The Raynox is designed to go in front of a lens, facing in the direction that the lens is pointing. The principle behind reversed lenses is that optics is reversible. If an optical system makes a good image at a certain setting and distance from a subject, then you can switch subject and image and it should still work well. If your Raynox works well when mounted normally on your lens, you are maintaining that good arrangement when you reverse the whole thing (lens + Raynox).
Lou Jost
www.ecomingafoundation.wordpress.com
www.loujost.com
Top

A successful combination I just tested at about m=2 is a reversed Sigma 70mm macro lens on a 150 mm Apo-Componon enlarging lens focused at infinity, with an 18mm paper aperture between the two lenses at the telecentric position, and with the Apo-Componon stopped down to f/5.6 . Apparently this 5.6 was not small enough to be the limiting aperture of the system, because the Zerene console log confirms that the lens was close to telecentric (scale values around 0.999). Very sharp on MFT sensor, should be even sharper-looking on a bigger sensor.
Lou Jost
www.ecomingafoundation.wordpress.com
www.loujost.com
Top

Lou Jost wrote:A successful combination I just tested at about m=2 is a reversed Sigma 70mm macro lens on a 150 mm Apo-Componon enlarging lens focused at infinity, with an 18mm paper aperture between the two lenses at the telecentric position, and with the Apo-Componon stopped down to f/5.6 . Apparently this 5.6 was not small enough to be the limiting aperture of the system, because the Zerene console log confirms that the lens was close to telecentric (scale values around 0.999). Very sharp on MFT sensor, should be even sharper-looking on a bigger sensor.

I'm having trouble imagining the mechanics of this setup. How much separation do you have between the two lenses, and where is the aperture placed?

By the way, I don't consider scale values around .999 per focus step to be terribly close to telecentric. That's still 1 part in 1000, which would be about 2.5 pixels position shift from one frame to the next, at the edges of a 5000 pixel image. Not nearly good enough to turn off scale correction and still be guaranteed a clean result. I'd recommend tuning for 0.9998 or better .

Can you clarify, please... Do you mean that when you stick a Raynox DCR-150 in front of your 100 mm macro, with the macro focused at 1:1, you get better results when the Raynox is mounted with male threads toward the subject?

Rik, the back focal plane of the lens is a couple of mm in front of the front element of the reversed lens. To put the aperture there I built the special nested rings described here:

The inner ring can be screwed in or out to precisely position the aperture. I did have it set to a point where it gave me scaling factors much lower than 0.999 (see thread mentioned above) but then I had to change something and I haven't taken the time to re-calibrate as precisely as I'd like.

Here is the whole set-up, with HDMI output live on my computer monitor as I stack. 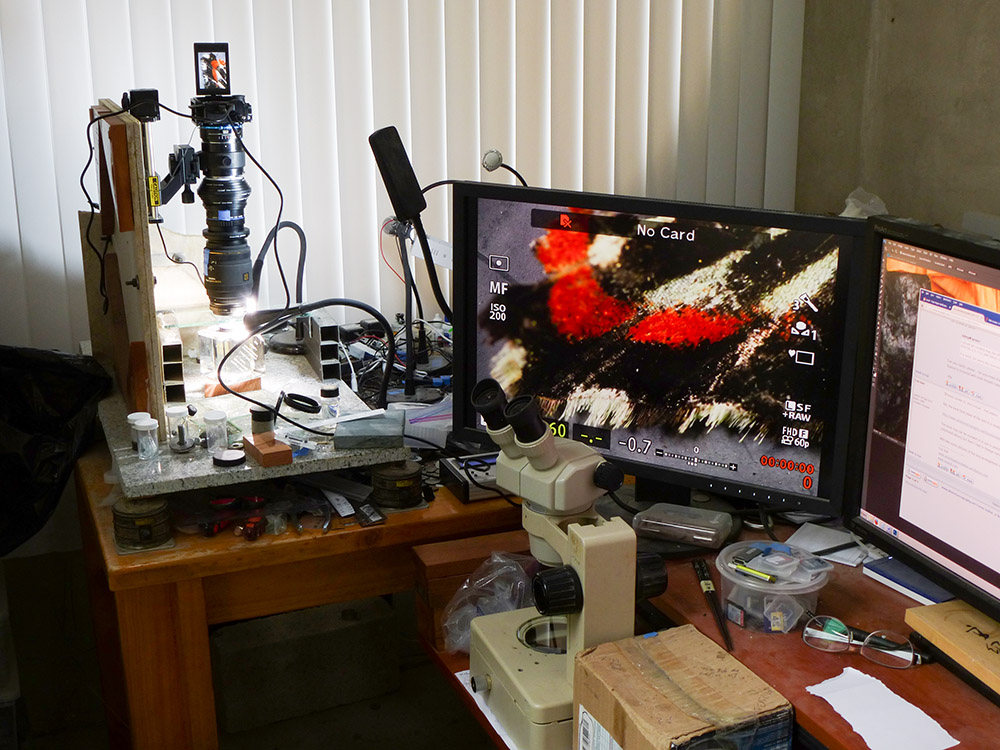 The camera and lenses (there is a Fotodiox shift adapter between the Nikon PK11 extension tube and the Oly PEN F camera: 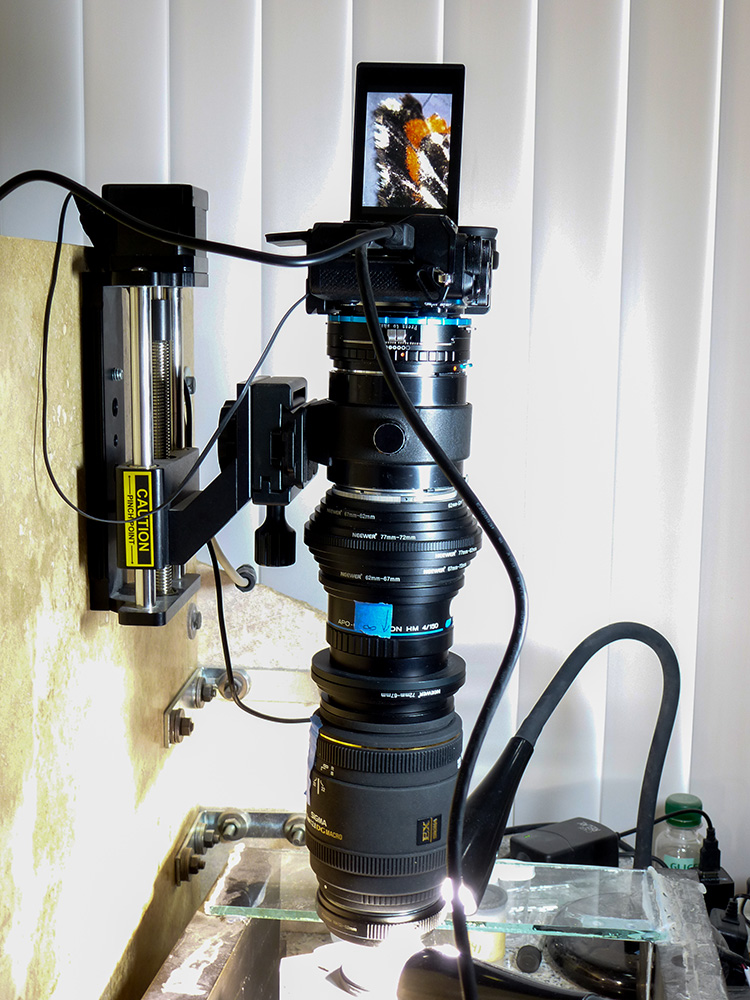 And the lenses split from each other so you can see the shelf that the paper aperture sits on: 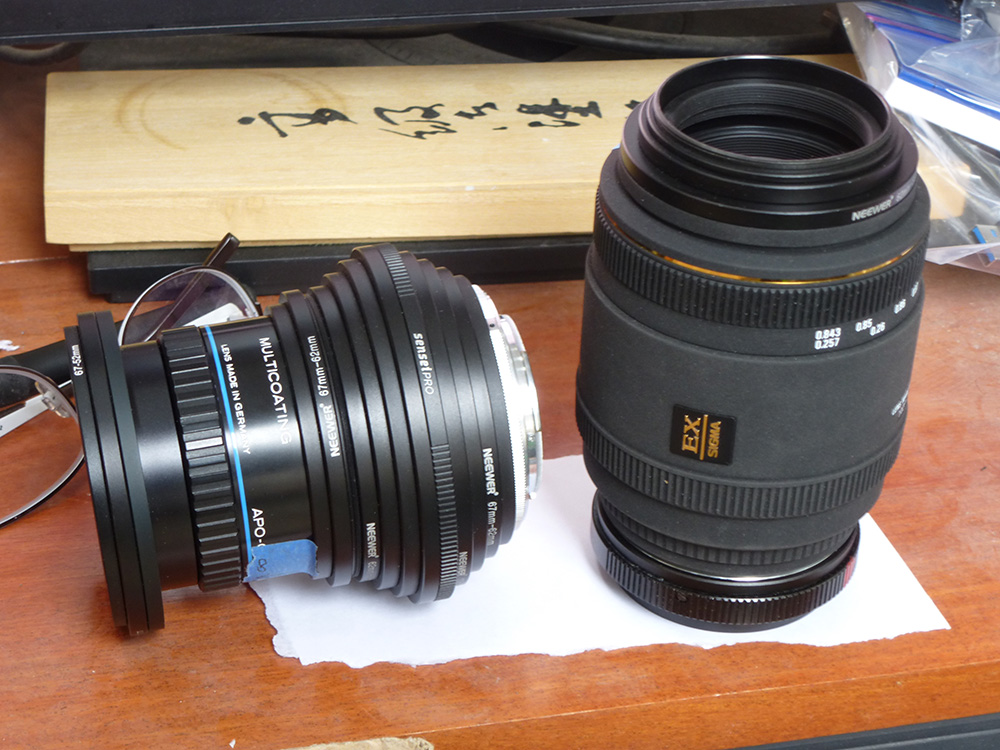 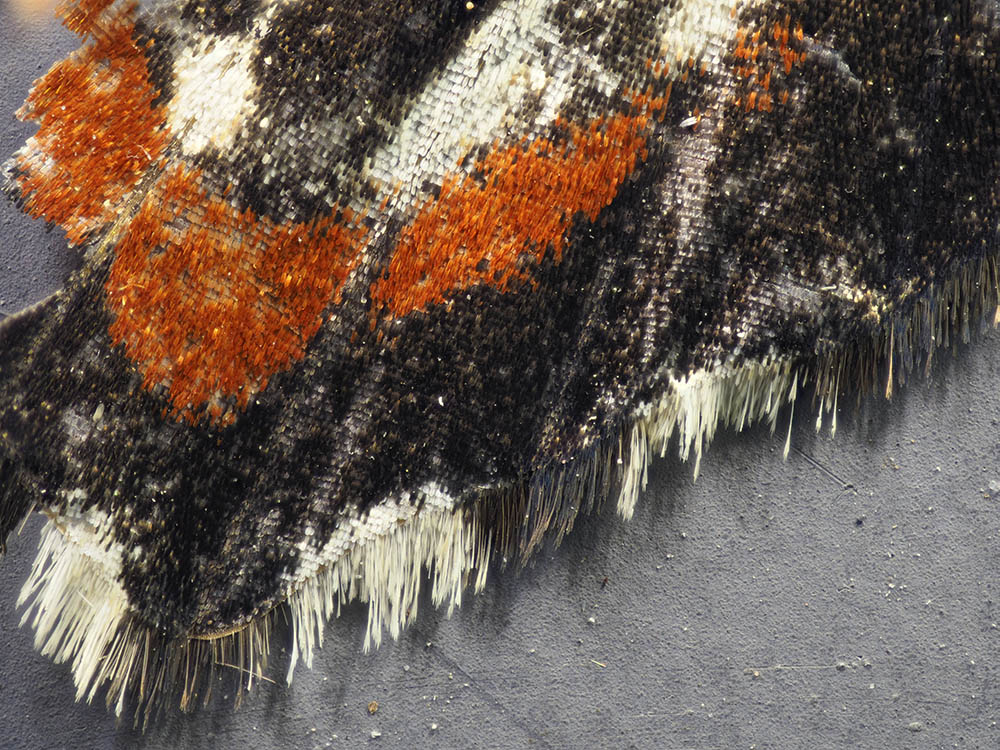 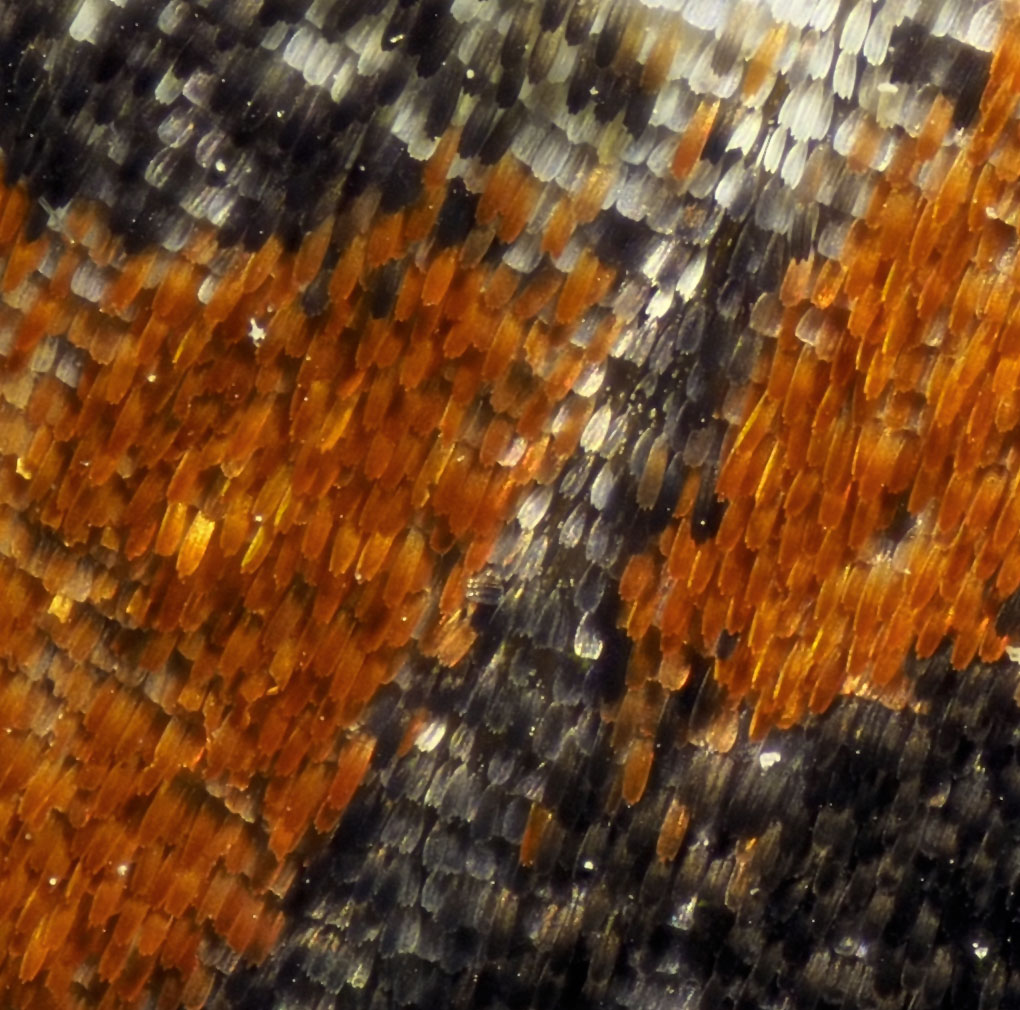 Bumping thread since it took me a bit to tie this into the associated example as well as some of the supporting discussion in other threads. If I’m understanding correctly, the effective aperture of a coupled pair iswhere notation follows the pupil ratio FAQ:with all terms inclusive of effects from focus breathing. This yields the below set of trajectories across some representative prime selections. I’ve also included a few typical microscope objectives as coupled lenses’ diffraction advantage relative to objectives is often mentioned. 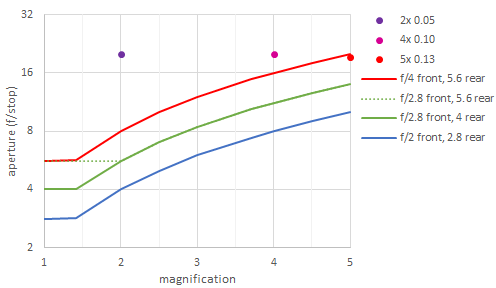 A testable prediction from the model is rear lens’ physical aperture needs to be wide enough to avoid vignetting from interception of the light beam cast by the front lens. Mark Goodman’s 28+105mm evaluation appears to support this. It also strikes me as consistent with vignetting difficulties at low magnifications, in attempting to use the wide end of tele zooms, and at larger front exit-rear entrance pupil separations. Rules of thumb as to the requirements selecting progressively faster front lenses to reduce diffraction place on rear lenses should therefore be stateable, though I’m hesitant to do so just yet.

As an aside, it appears this model should also apply to microscope objectives and close up lenses (provided objective magnification and NA are converted to the equivalent focal length and f/stop and close up lens diopters are translated to focal length). Additionally, speed boosters and teleconverters are expressable via the f_rear < f_front case (which yields M_pair < 1 and EA_front < N_front) and f_rear = {1.4 f_front, 2 f_front}. Probably not the most natural way of describing positive and negative groups added to a lens. A somewhat interesting corollary, however, is the aperture of diopters, boosters, and teleconverters never becomes limiting.
Top
Post Reply Previous topicNext topic
13 posts • Page 1 of 1