Nikon makes a fancy well-labeled 20x 0.75 0/infinity violet-corrected apo objective which usually costs over a thousand dollars. There are also many similar-looking but unlabeled generic objectives on eBay for a small fraction of that price. The only thing marked on these objectives is the model number, usually 0500-0087. The eBay ads for them usually say they are the same as the Nikon objective mentioned above. In a recent thread (http://www.photomacrography.net/forum/v ... hp?t=38767), forum members Greenfields and Abednego1995 revealed that these generic objectives come from a gene sequencing machine and are indeed made by Nikon but are NOT the same as the Nikon-labeled objectives, contrary to what the eBay sellers say. The main difference seems to be that the unlabeled objectives are designed to work through a fairly thick glass wall of a flow cell 300um thick, imaging either the interior side of that wall or the interior side of the far wall 100um away. There may also be other differences between this and the Nikon-labeled objective.

Last year I bought one of the generic objectives, but not the 0500-0087 model. Mine is the 1501-9398 model. I was not happy with it after my initial tests, and I nearly gave it away. But this new information about its purpose could explain why it performed badly. It may just need a cover slip, and a thick one at that. The patent application (link in the above thread) gives the impression that the 0500-0087 objective expects to shoot through a 300um cover slip and 100um of liquid, or perhaps 300um of glass plus 40um of liquid.

I made a partial stack, concentrating on center left. Here is the full image (this one is with three cover slips), using transillumination diffused by dilute milk. Tube lens is Nikon 80-200 IF-ED. Not sharpened, only adjustment was levels. 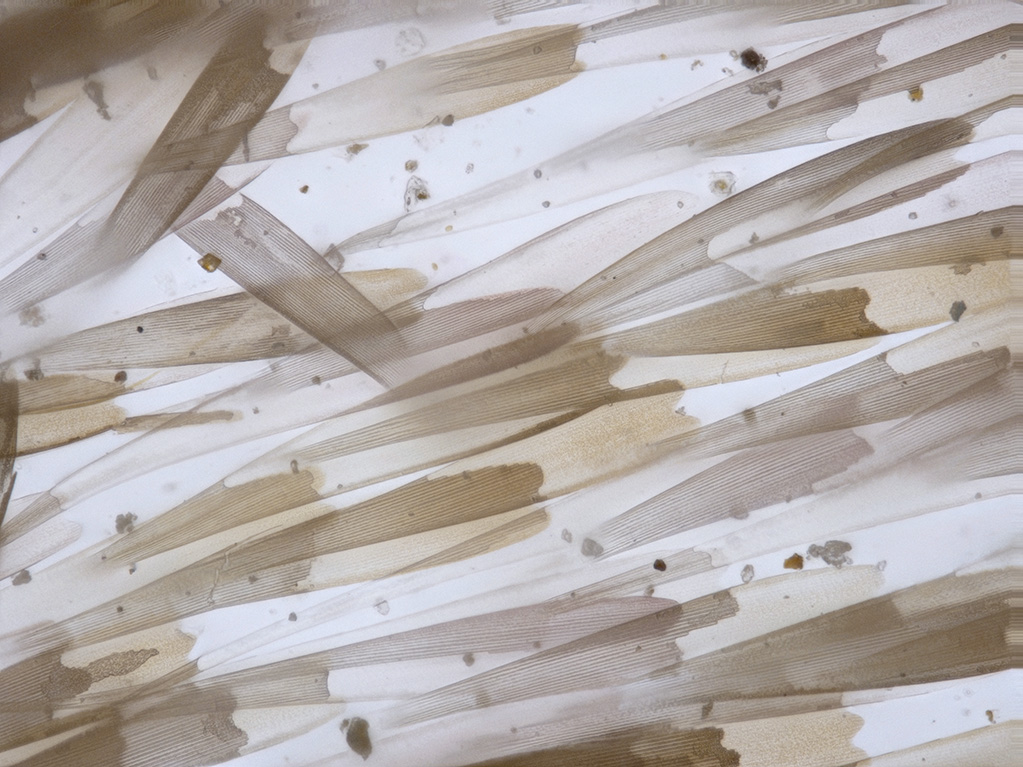 Here are 100% crops with one, two, and three cover slips respectively from left to right: 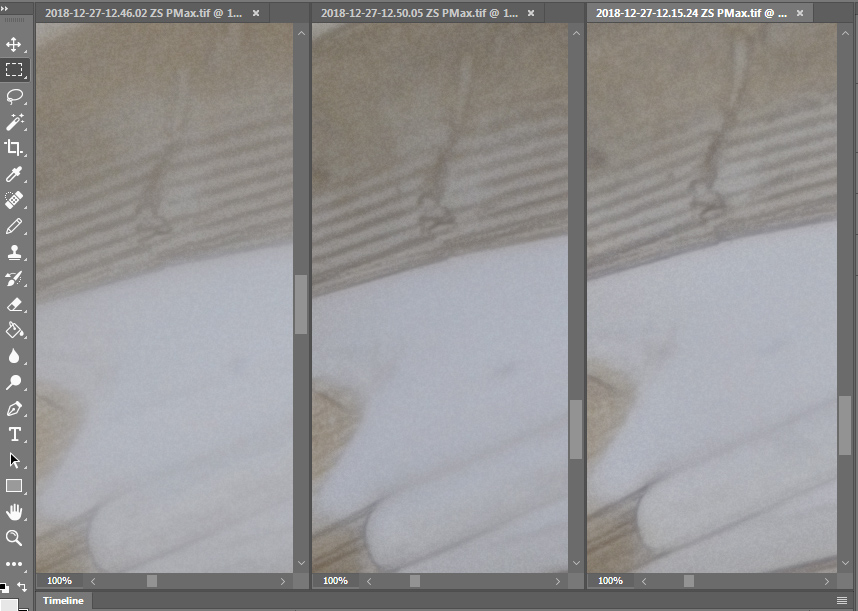 The one-cover-slip shot (left) is not as good as the other two.

It can be pushed down on MFT to about 110mm with this zoom, and it is very sharp, as you might imagine for a 10x 0.75 objective! Though I ought to check that NA, since it is only based on the eBay ads which were misleading about other aspects of this objective.
Lou Jost
www.ecomingafoundation.wordpress.com
www.loujost.com
Top

A fascinating and very useful result.

It is indeed interesting.

On the subject of covers, a number of workers have found very larger variations within a box. Loveland (1959) studied this, as did Bradbury later in 1969.

I am not sure that No. 0 covers would help here, as they are the thinnest.

Perhaps the cover slips used for haemocytometers would be more suited, as these are usually around 0.4mm.
regards, Mike.

Four of those thin ones on Amazon would get us to 0.40mm. I am sure there is an optical penalty for all those air-glass junctions though.

By the way, according to the patent specs, the working distance is 0.60mm not counting the cover glass. This is the main drawback of the lens. I wonder if it can be adapted to epi lighting.
Lou Jost
www.ecomingafoundation.wordpress.com
www.loujost.com
Top

With finite objectives, it is sometimes said that coverslip errors can be "compensated for" by altering the tube length.

Worth a try with an infinite?
Chris R
Top

Thanks for the experiments! I am lazy enough not to capture a few images.
As for what kind of compensator they actually use on the MiSeq and other new machines, I have no idea since they never come up on the bay as a complete optical bench, and no way any sane facility manager would allow a guy with a screw-driver near an operating machine :-)

The simplest way to compensate for coverslip error, as Chris mentions is to use a draw tube on the microscope. Spherical aberration is a discrepancy in the paraxial focus and peripheral focus, and changing the tube length changes the primary image plane. By trial and error, we find a spot where the transverse spherical aberration is minimal and if this is within the circle of confusion, it can be said that spherical aberration is corrected. However, this will introduce other aberrations, and sometimes will work, sometimes not.

So if we are to make a compensator instead of changing tube length, it will be by means which changes the angle of the peripheral ray regards to the paraxial ray. This could be done by inserting behind the objective, a plane parallel plate in a finite setup or a weak convex or concave lens in infinite setup. Easier said than done, this is my current understanding. Please correct me on errors since I'm still learning also!

As I mentioned in the original thread which explained how to use these lenses, several variations of this objective are now available on eBay from a US seller, with warranty, for $135-140 each!!! I just now got the "0500-00087" version, which came from the gene sequencer mentioned above, and a Nikon-marked apo 20x 0.75 DIC for standard cover slips, which solves the problem of optimizing the objective for uncertain cover slip thickness. I think DIC lenses do not have optical compromises in ordinary non-DIC use....Can anyone confirm that?

These are incredible prices now that we know what these objectives really do, and how they need to be used. Here is a link to the US seller I bought from. He has lots more!

These objectives rank with the Lomo 3.7x, Zeiss photolithography lenses, and the DiMage scanner lens as among the best optical deals in the world for high-end glass. These would have cost several thousand dollars new.

Just beware of the short working distances! The labeled Nikon version has the longest WD, 1.0 mm, which is still close to nothing for incident light use.
Lou Jost
www.ecomingafoundation.wordpress.com
www.loujost.com
Top

Lou Jost wrote:I think DIC lenses do not have optical compromises in ordinary non-DIC use....Can anyone confirm that?

AFAIK DIC objectives just need to be strain free (like Pol objectives, maybe a bit less exigent) and to have the rear focus plane at the right height for the matched DIC objective prism they are designed to work whith (DIC objectives can do not deliver DIC when mounted in a different system)
In some cases like with old systems they may have (or not) other compromises.
Pau
Top

Thanks for the heads up.

I have just bought one. The ebay listing stated that the seller started with 12 copies. There are now just 3 left.

US Patent 5,920,432 to Yutaka Suenaga and others filed in 1998 and issued on 1999 includes as the "second embodiment" a design which appears to match the specifications of this objective. As always there is the caution that published designs may have been altered for production, possibly more than once, notably as optical glasses are discontinued for environmental reasons. 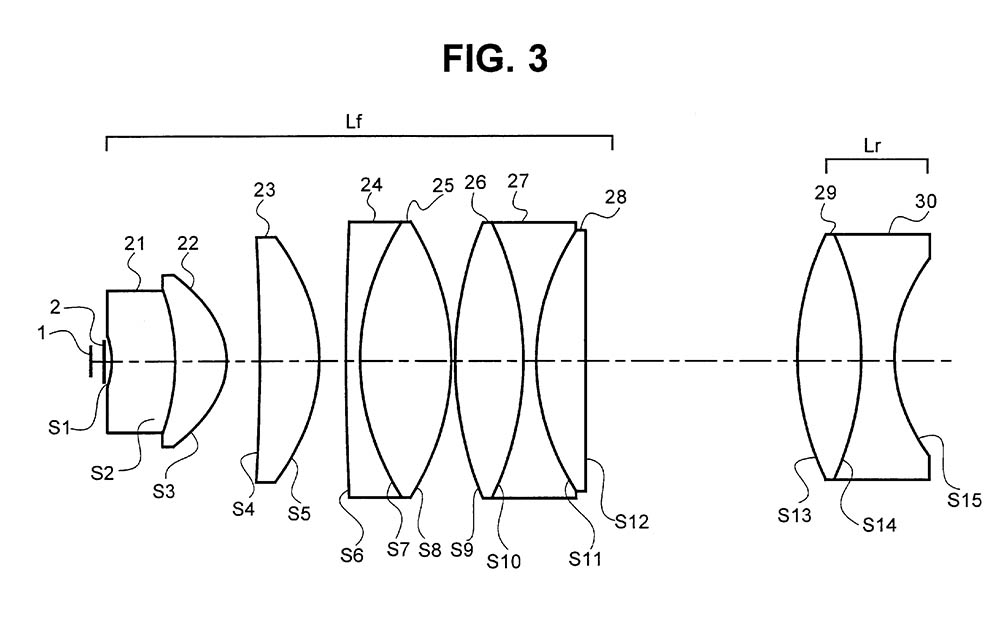 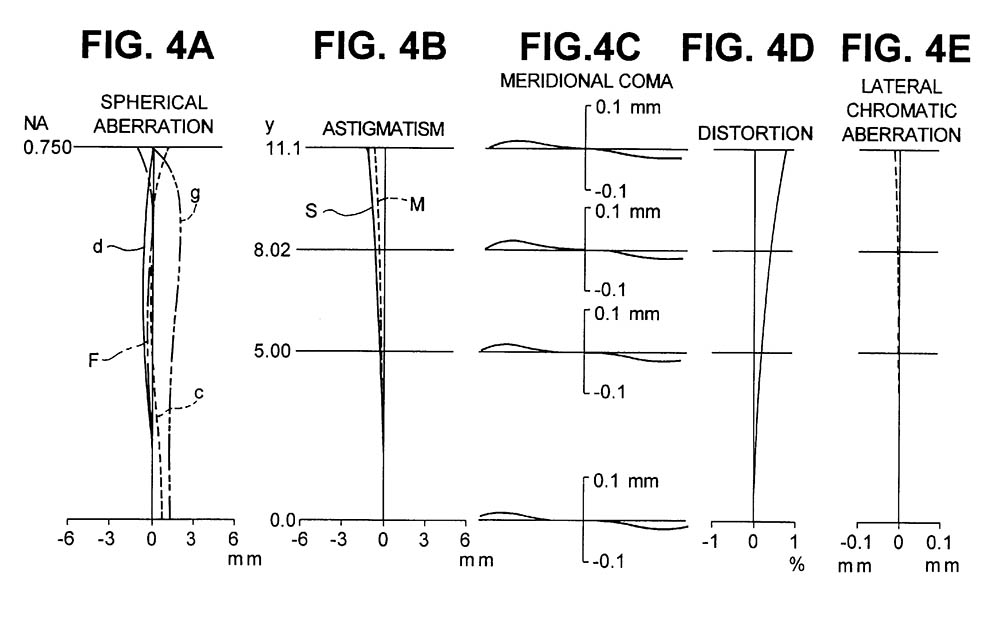 The patent begins with the "Background to the invention" which explains in detail that the glasses have been selected to enhance UV transmission. This may imply imply that the patent is for the VC version. Whether the VC version really is different, or whether the designation was added to emphasise the value of an existing product I cannot say.

Greenfields, I'm glad you were able to take advantage of it. Which of his three versions did you buy? I am not sure which of them, if any, are actually violet-corrected. But I think any of them are great bargains.

0500-0087, the version that came from the gene sequencer that was discussed in the original post, allegedly VC ---5 left

I'm assuming Henry meant he has just bought one of the "normal" 20x 0.75's.
I looked for my "VC" but can't find it. As I don't have a proper infinite microscope it's something I bought, wondered about, and put somewhere safe.

(I did that with a different objective, which looked "too cheap". When it arrived I wondered where to put it, and thought of a logical place it could stay until the time when I do have a proper scope to put it on. When I opened that place, I found I already had one, identical

I bought one of the objectives marked 20x 0.75 beccause I have a Nikon E800 with a fluorescence illuminator. It has fluorescence mirror blocks including a UV block. Just need a darkfield block if I can find or improvise one.

Just checked, and there is now just one left less than six hours after Lou's post earlier today.

My problem is finding the time to escape from work to use them.

Does anyone have any ideas of the difference between the objectives marked:

All I know is that my tests of the 1501-9398 are consistent with what little we know about the 0500-0087. My guess is that they need to shoot through slightly different thicknesses of glass.

We do know the exact model gene sequencer that the 0500-0087 came from, and these machines are common, so it should be a simple matter to find one and see what the designed thickness is.
Lou Jost
www.ecomingafoundation.wordpress.com
www.loujost.com
Top

Well all the objectives marked 20x 0.75 are gone - reports on whether they're problem-free, would be interesting.
Chris R
Top
Post Reply Previous topicNext topic
53 posts