Shooting "Face of a hobo, for sure!"

Shooting "Face of a hobo, for sure!" 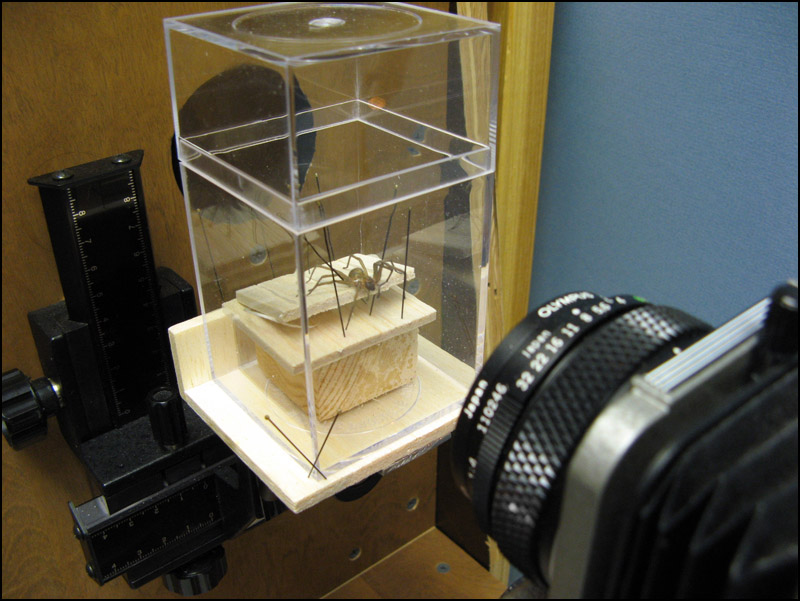 This was the setup for shooting "Face of a hobo, for sure!".

The spider was anesthetized with CO2 (carbon dioxide) from a lens duster. Then it was restrained with a tie-down strap of dental floss between its abdomen and cephalothorax, and posed by moving several legs out of the way.

Shooting through the wall of the clear plastic container allowed a continuous dose of CO2.

Continuous CO2 was a critical aspect for this particular spider, which would wake up active and cranky in about 30 seconds when exposed to normal air.

Different spiders seem to have hugely different sensitivities to CO2.

With the hobo, the challenge was to keep it knocked out long enough to restrain it. I eventually ended up having to install the restraining strap while bathing the critter in continuous CO2. But I have a different funnel-weaver that stays knocked out for about 20 minutes after a minimal dose.

I have no idea what the long-term effects of CO2 treatment are. It is a standard anesthetic for fruit flies, but the literature cautions against using it in some kinds of studies due to long-term behavioral changes.

Illumination was dual head fiber optic through a kleenex tissue diffuser, roughly 45 degrees from each side to avoid reflections from the box. White paper behind the box provided a uniform gray background for the subject.

I see no ill effects in your shot from shooting through the plastic, but sometimes it's a problem. I use "double-size" cover slips on my microscope slides, and have found that a small "window" cut into the plastic container and then covered with a cover slip makes a good container with excellent "optical" qualities.
http://www.krebsmicro.com
Top

Charles Krebs wrote:... small "window" cut into the plastic container and then covered with a cover slip makes a good container with excellent "optical" qualities.

These containers are pretty good, but I had been thinking about doing some surgery to replace plastic with glass.

Glad to hear you're ahead of me on that one. (It's no surprise, of course!

Do you have any feel for how important the thickness of the glass is? Larger expanses would be easier to work with, but the added aberration due to thicker glass is worrisome.

Don't really know at what point "thickness" becomes a problem.

If you can shoot "straight on" (perpendicular to the glass axis) it's obviously less of a problem, and the surface flatness ("accuracy") becomes the big issue. (Sometimes camera stores have a box of old used UV or skylight filters, and these can make excellent windows if they are in good shape. Many are coated, which also helps with reflections).

Sometimes it is not alway possible to be exactly perpendicular to the glass.
Anecdotally, I find the the thinner the better in this case. This is why I like cover slips, although they are sometimes too small to be useful.

Am assuming you have - but just wondered if you guys had tried using glass off a scanner / photocopier, as I'd imagine that this would be higher spec than 'average' glass?

I have not, but that's a really interesting idea -- thanks!

Another alternative might be if you could find an old glass negative, as these were fairly thin and flat, and wash the old emulsion off it.