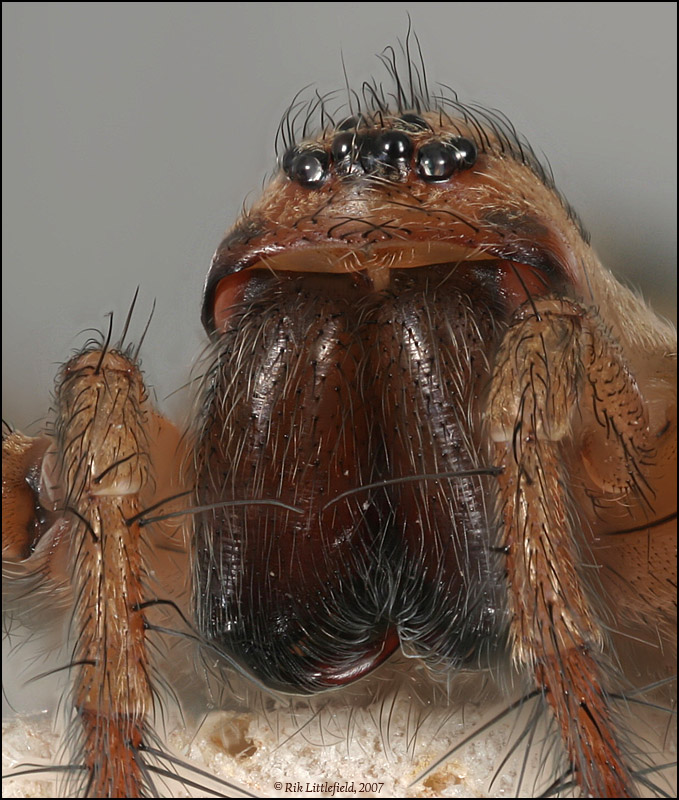 Here's a formal portrait of my little friend, the adult female hobo spider pictured in this earlier posting.

Yep, it's stacked, and yep, the subject is live. Therein lies another story, but it's too late tonight to tell that one.

Hope you enjoy this image!

Rik, you can't outfox us--We all know full well that this is actually a publicity shot for the villain in the next Star Wars movie!

arlon wrote:How did you get him to stand still?

Anesthetized with CO2 (a trick borrowed from Charlie Krebs, here).

For shooting the hobo, see this description in the Technique forum.

Geez, would ya just look at that overbite, hope she or it doesn't lose a contact. With all those eyes, what's a spider to do? Would you also just look at those "fangs" and those hairy legs. Here is what nightmares are made of folks, I should know, I dated a girl that looked like this...in my younger years of course and after a good stiff drink or two. Out of all the head on spider photos to have ever been posted on here, I would have to say that this is the best in all aspects there Rik. Very nice work here. I think we can give it

Remarkable shot and subject Rik. I have got to try this CO2 trick. Never seen this spider before. Excellent job.
Walt
Top

WoW, simply incredible Rik. Looks like the Mastodons of the spider world. The jaws are very formadable looking.
Take Nothing but Pictures--Leave Nothing but Footprints.
Doug Breda
Top

Ken: Wow -- two thumbs up from an avowed arachnophobe. Now there's an accolade!

Walter: The CO2 trick is interesting and helpful, but it's far from being a panacea. The good news is that it seems to be a pretty safe anesthetic, in the sense of not likely to kill the subject. The bad news is that its effects are highly variable, and the subject is often not completely motionless even though apparently "out like a light". It worked great for shooting this hobo's face. But when I tried shooting the spinnerets of a different funnel-weaving spider, I discovered that it was impossible because the spinnerets never quite stopped moving no matter how much CO2 I poured on. Same thing happened this afternoon in a different test, when I was contemplating shooting a fly's proboscis. So there's still a definite place for ethyl acetate and the like, despite their, ah, non-reversible effects.

Doug: "Mastodons" -- yes! I knew this picture reminded me of something, but I couldn't quite figure out what. That was it.

Just got to say well done, and the old girl is still living, that is fantastic

. Keeps ringing a smile to my face every time i come back and look at hers.

Thanks, Tim, I appreciate that. This is turning out to be one of my favorite shots as well.