OK, it was a momentary reaction, but that's actually what I thought for a moment when I saw this structure: 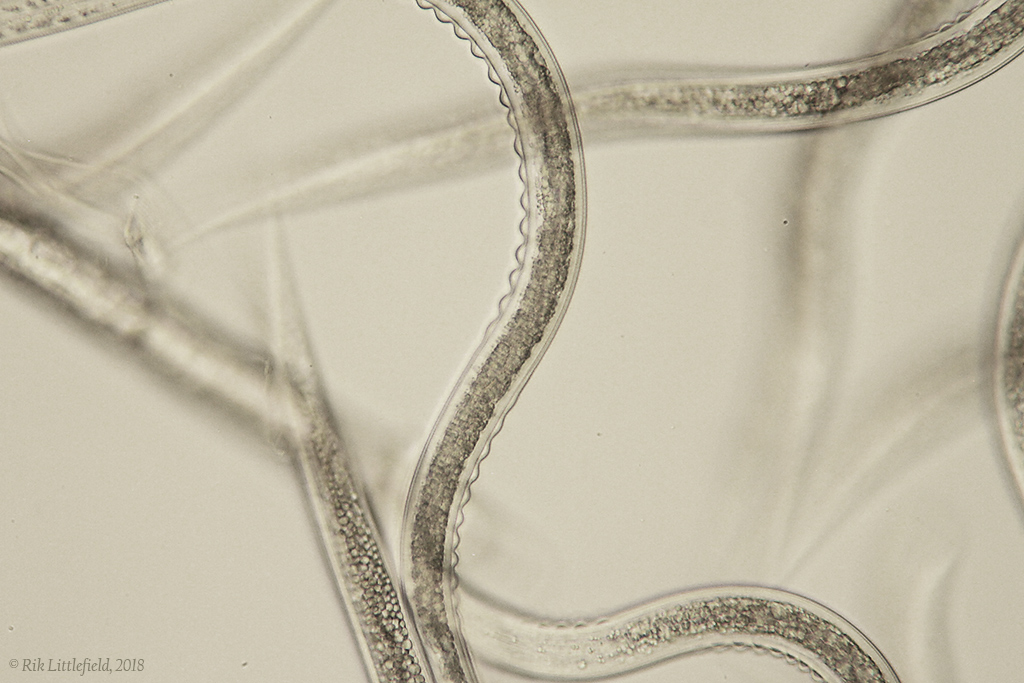 The background here is that my strawberry patch is infested with strawberry root weevils, which I'm attempting to treat by applying a spray of "beneficial nematodes".

More precisely, these are Heterorhabditis bacteriophora, which BioLogic Company (https://biologicco.com/) apparently cultures in enormous quantities and ships out to people like myself in little envelopes containing a fluffy white powder described as follows:

The instructions are to disperse the contents in water, spray the affected area, and water thoroughly. Then over the next few weeks the nematodes are supposed to parasitize the weevil grubs and kill them.

Of course I could not stand to do this without taking a closer look.

So, midway through spraying, I diverted the stream into a small plastic container and captured 100 ml or so. After a quick look under stereo scope to confirm that it contained little wigglies, I let the liquid settle overnight, then put a drop of the thick stuff from the bottom onto a slide.

With 10X objective, this is what I saw: 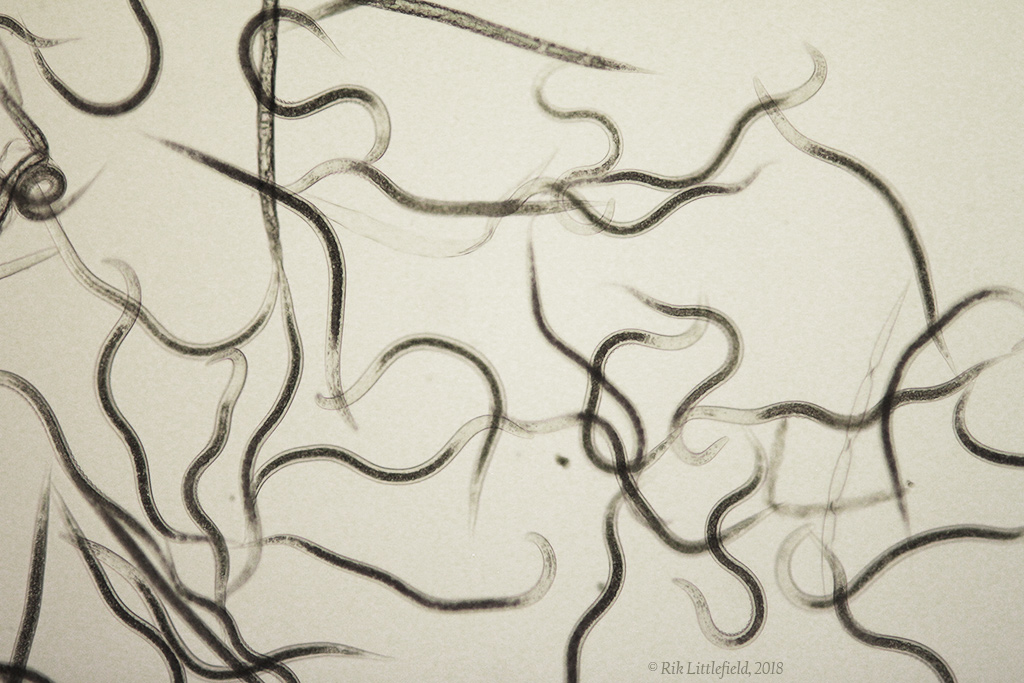 At the scale shown here, there's nothing particularly interesting.

But at full resolution through the eyepieces, even with 10X objective and 10X eyepiece there was some interesting detail that immediately attracted my attention: the critters seemed to have a multitude of little projections that reminded me ever so much of prolegs on a caterpillar.

Here's a crop of the image above: 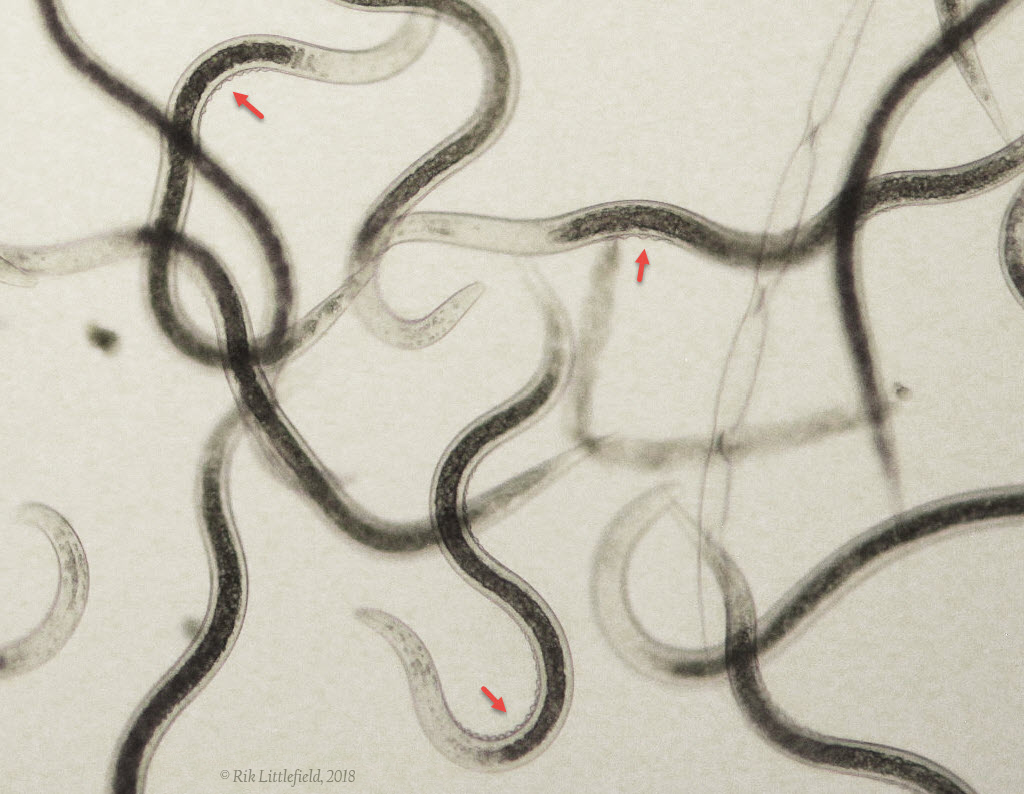 Cranking up the magnification to a 40X objective produced the image I showed first:

Now, the odd thing was that while most of the nematodes showed the ripple pattern wherever they bent very much, there were also a few individuals who never did. Those also tended to be a bit smaller: 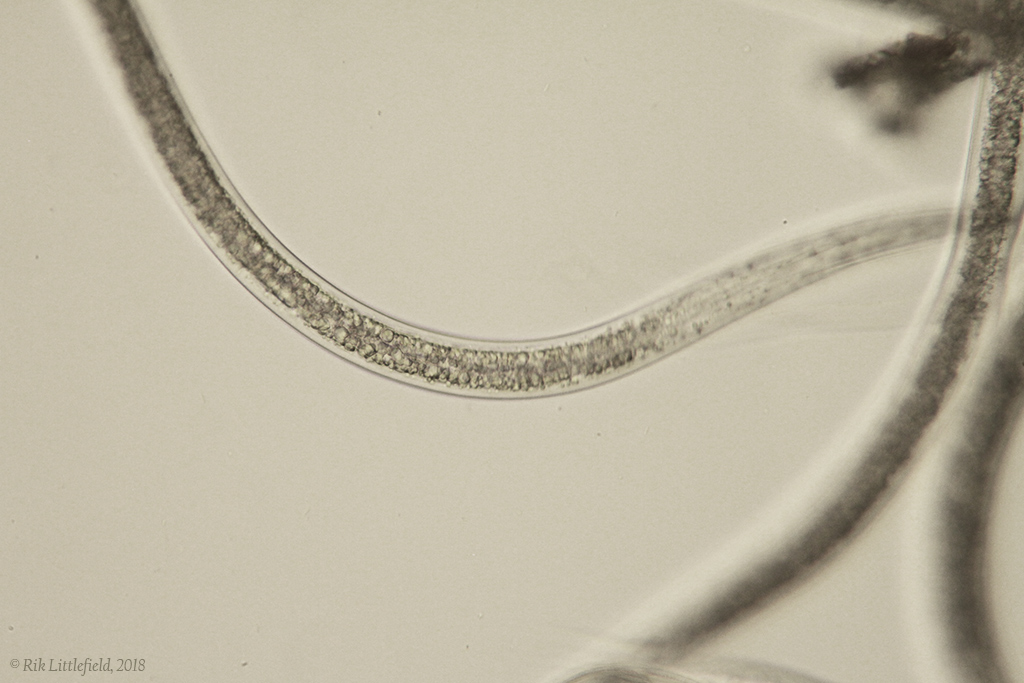 Of course I started searching for more information. It did not take long, mostly with Google image search, to find a plausible explanation.

According to THIS SOURCE, the infective stage of Heterorhabditis bacteriophora is actually a third-stage juvenile, described more fully like this:

Matching against their picture, I'm reasonably sure that most of what I'm looking at are dauer juveniles, with the ripples due to that retained second stage cuticle. And then I'm guessing that the slightly smaller individuals that never develop the ripples are just one stage earlier, probably about ready to become dauers, but still with just a single cuticle.

2. The recommended application rate of these things is not as high as I imagined. BioLogic quotes a rate of 10 million per 400 square feet, which works about to be about 1 nematode for every 4 square mm of ground surface. Bugsforgrowers.com says "the optimal rate of 1 billion infective juvenile nematodes in 100 to 260 gallons of water per acre is generally recommended". One acre is 4.047 billion square mm, so their number ends up being almost the same. Given that these things have to disperse through several inches of soil column, I'm pretty surprised that such a low dose rate is considered effective.

3. This species of nematode is an active hunter, moving through the soil with guidance from chemical cues. Some other species are ambush predators, basically just waiting in place for some insect to come ingest them or at least get close enough to be pounced on.

4. This species is fully hermaphroditic. Only one individual needs to infect a victim, to end up essentially mating with itself to produce the next generation. Other species require simultaneous infection by male and female nematodes.

I did post an image a while ago of a L3 stage larvae of a “redworm” species that infects deer.

Superb illustration of how the microscope, plus a little curiosity and effort, can make many things far more interesting. Thoroughly enjoyed the write up. Thanks Rik.
Top

Interesting! Thanks for the write-up.
Top

micro_pix, thanks especially for the link to that posting of yours. In my brief reading, I got the same impression as you, that the protective sheath is a distinguishing feature.

Perhaps I would have been quicker to recognize the sheath in mine, except that in mine, the wrinkling was so smooth and regular that it gives a completely different impression from a flexible sheath with a liquid layer underneath it.

I did watch them in motion, it was only really when seeing the head and tail occasionally retracting a little from the outer sheath that I realised the whole larvae was encased and that it was an L3 stage larvae. In future I’ll look for that “concertina” effect on the inside of the bends.