It is commonly written that

Specular reflections preserve polarization, but diffuse reflection does not.

I can illustrate this effect using a very simple scene consisting of two shiny steel balls, mostly illuminated from the right side by polarized light. There's another polarizer on the camera lens.

Here is an image of the scene, with and without annotations. 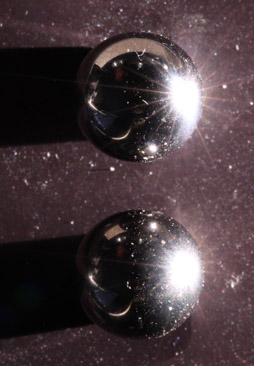 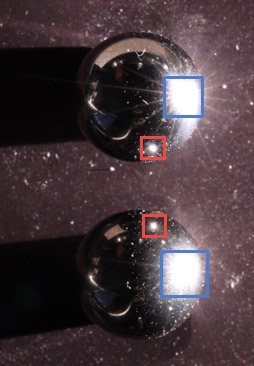 Here are those three cases, first as single frames and then as a continuous animation. 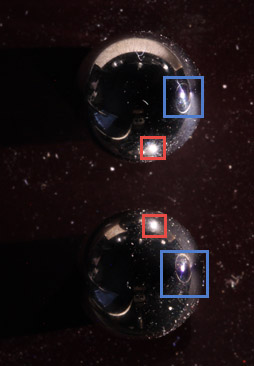 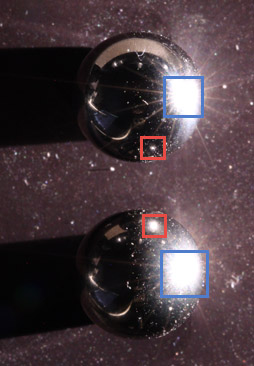 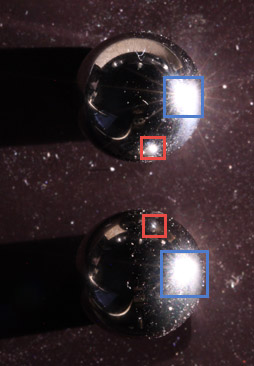 I'll let you work out the details of how things get rotated. I find them quite difficult to explain even to myself, let alone to anybody else. The point is just that multiple bounces can cause the angle of polarization to rotate.

I think this is not the same phenomenon as the usual distinction in which surface reflections retain the polarization of the illumination but subsurface reflections resulting from absorption and re-emission do not. Certainly there's nothing in this scene except for specular reflecting spheres, plus some miscellaneous stuff like balsa sheets in the environment around them that we're ignoring.

This posting was prompted by the discussion about diatoms and cross-polarization, HERE. I initially posted this as a reply there, but then decided it would be more generally useful as a separate thread.

Great demonstration, and an effect I had never heard about before. Could it be that non-specular reflection is generally just specular reflection off roughened surfaces so that this randomization happens?
Lou Jost
www.ecomingafoundation.wordpress.com
www.loujost.com
Top

Microscopically, there really only is specular, it is the surface roughness that leads us to the term diffuse, as the scale we are viewing it at increases. Just think of it as each minute point has it's own angle, causing Fresnel reflection depending on the plane of polarization. If the surface is rough, we see it macroscopically as random, but of course it is actually deterministic.

Yep, it makes my pea-brain hurt to think about it but it does make sense. These surfaces have a bazillion microscopic surface imperfections, subsurface scattering and a crystalline structure. All well suited to to dry polarized lighting apparently

...what if it were atom mirror instead of shiny steel balls.
Top

Smokedaddy wrote:...what if it were atom mirror instead of shiny steel balls.

Individual atoms are too small to have much interaction, because of diameters that are roughly 1000 times shorter than the wavelength of visible light. But non-homogeneous collections of atoms at larger scale, sure.

For further reading, consider "A Physical Model for the Polarized Scattering of Light" at https://www.sci.utah.edu/publications/b ... ayford.pdf (8 pages).

In addition to the angles of surfaces, the molecular structure also matters. There's a big difference between metallic surfaces that retain the angle of polarization (if any), and dielectric materials that can alter the angle or produce polarized reflections even when the illumination is non-polarized.

As a quick demonstration, if you set a coin in a shallow pool of water, illuminate with non-polarized illumination like normal room light, and look at the combo through a polarizing filter like sunglasses, then it's easy to see that the polarizer cuts glare from the water but not the coin.

However, if you illuminate with light that is polarized at say 45 degrees, then the viewing polarizer can be adjusted to kill reflections from the coin or the water, or direct from the illumination, but again, not any two at the same time.

Here's an illustration of that effect. No lens polarizer on the left, three different angles for maximum extinction on the right (direct, reflected off water, reflected off coin). In this case the coin never goes to complete extinction, although it does in other tests shown below. I suspect what's going on there is that the reflection from coin is coming partly from regular metal and partly from a dielectric oxide layer on top of that.

If the illumination polarization is perpendicular or parallel to the water surface, then the situation gets simple again and one orientation extinguishes everything. Here again, no lens polarizer on the left, the unique extinction angle on the right. (In that second image, I think the bit of remaining reflection from the coin is due to some non-polarized light getting around the edge of the slightly-too-small polarizing sheet.) 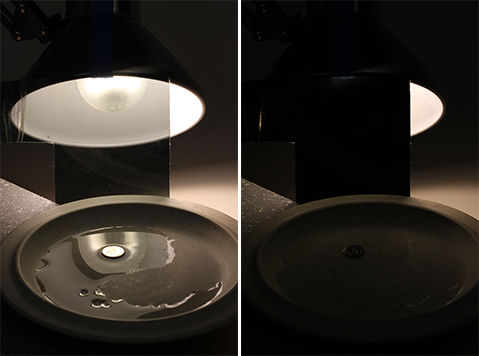 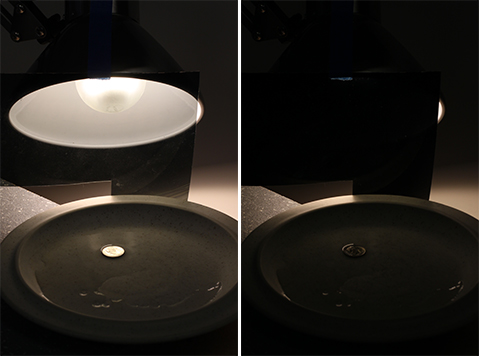 More about reflections off dielectric surfaces can be read at Wikipedia, Brewster's angle .