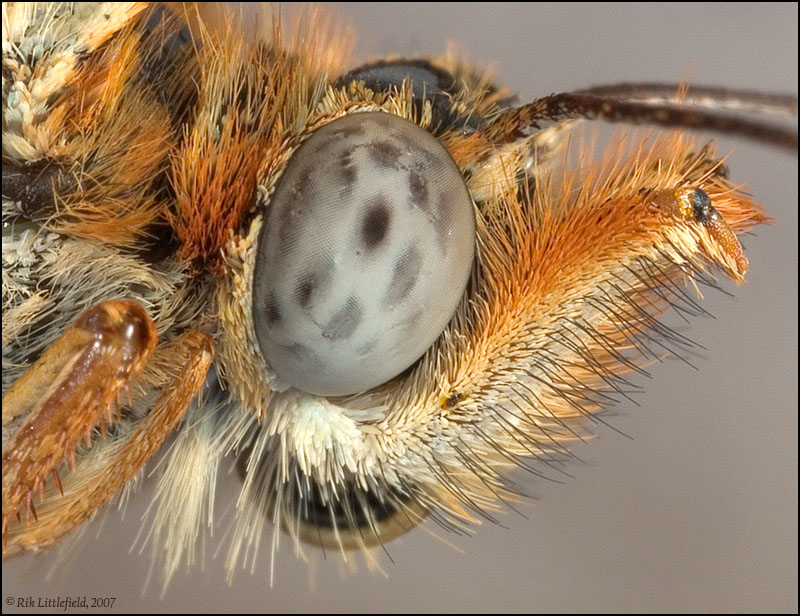 In an earlier posting, I mentioned that the eyes of many butterflies have numerous fuzzy dark spots that appear to move, following the movements of the observer.

The fuzzy dark spots are what's shown here, although you'll have to take my word about the movement part. With the butterfly under a stereo scope, the dark spots appear to be deep within the eye (because each of my eyes sees them at a different position) and they definitely track my viewing angle.

By the way, the small dark spots and the sharply edged dark spots are also optical effects. They are apparently caused by small sharp irregularities in the curvature of the compound eye. Under the scope, it's like watching fuzzy dark spots move behind a lens that is spotted and streaked with water.

The subject is a live Fritillary butterfly, genus Speyeria. It's S. zerene, I think, but this group is a bit troublesome.

Pretty nice image there Rik. I was wondering how you kept a live subject like this still enough for a shot or two, then I saw the "wing clamp" thing at the bottomm of your post.

Butterflies often get quite passive when their wings are held and there's nothing around for them to try reaching with their feet. This was a 1.3 second exposure!

With luck, I can get some eggs from this little gal. I haven't had any of them to work with since stacking became practical. I'll be very interested to see what they look like.

Reference: The rearing methods I use are those of Mattoon et.al., described in this paper: REARING TECHNIQUES FOR SPECIES OF SPEYERIA (NYMPHALIDAE), published in Journal of the Lepidopterists' Society, 1971-25(4)247. The paper can be accessed by visiting http://www.lepsoc.org/ and searching for speyeria rearing. As of today, it'll be the first hit. The URL of the full paper is https://images.peabody.yale.edu/lepsoc/jls/1970s/1971/1971-25(4)247-Mattoon.pdf , but you may have to copy and paste it into your browser's address bar if the parentheses do not play nicely with the forum's [url] tags.
Top

Very interesting subject matter and image Rik. I learn somthing new every time I enter this form. I'll have to check this out myself sometime.