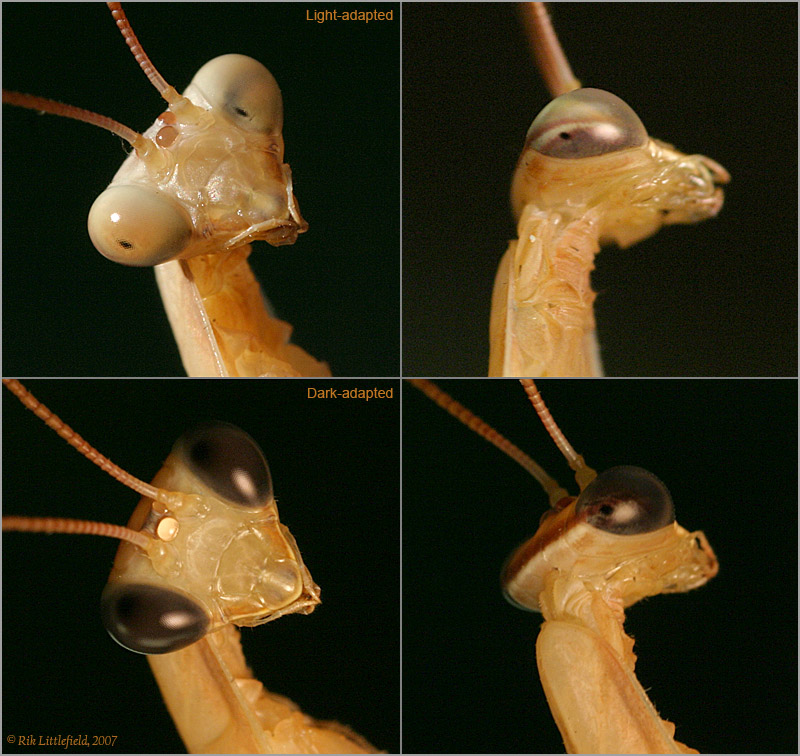 I've been keeping a mantis for the last few days, photographing its eyes (here and here).

Much to my surprise, I discovered that the eyes of this mantis undergo a dramatic change of appearance when the insect is kept in the dark for a few hours.

The top row is the "normal" appearance of the mantis, after it's been exposed to exterior shade all day. The lower row is what it looks like after a couple of hours in complete darkness.

I have observed a couple of cycles of this change, but I haven't kept careful track of how long it takes. Roughly speaking, it seems to take around an hour for most of the change to occur. Very slow, but quite obvious when it's done!

In a quick Google search, I didn't find anything about this effect. Do any of you folks know about it?

Now this could be a whole new research direction. Excellent find.
Take Nothing but Pictures--Leave Nothing but Footprints.
Doug Breda
Top

I have missed some interesting posts. So a reaction on a topic of some weeks ago.

Interesting find, Rik! Perhaps the trick is to find the right search keywords for Google, like
'insect eye change light adaption' gives some articles that may provide information.

An interesting post Rik. Do you think that this is brought about by a chemical change occurring within the eye or perhaps a physical change analogous to the dilation of our pupils?

The anterior ocellus also looks quite different in the dark adapted image. Assuming that illumination is identical we are quite likely seeing a "real" change here too (although in this instance lighter rather than darker).

Unfortunately I don't have much time to look for more info, but a friend of mine wrote an interesting article years ago in Micscape. It does not give the answer to this question but it is interesting to read.

There seem to be different designs of eyes of nocturnal insects. And some insects seem to have the ability to change the sensitivity, perhaps that is the case with the mantis. I also read in this article that Mayflies have these strange double eyes because the one pairs is for nocturnal conditions.

But I read and write all this in a hurry. Little time:)

Seems you have a good example of "phototropy," I am assuming. This is where color change occurs in relation to the wavelength of the incident EMR (electromagnetic radition), especially that of visible light. Though, then again, I may be wrong in my assumption. I know little about insects.

Bruce: if I had to guess, I would suggest that it's a combination of chemical and physical, but mostly chemical. Notice in the right-hand pictures that the "moving black spot" is still present, but noticeably larger, in the dark-adapted eye. I suspect that is a physical change, analogous to our pupil widening (iris opening), while the overall darkening is a chemical change, analogous to the increased concentration of non-bleached rhodopsin as human eyes dark-adapt. But of course this is speculation. The difference in appearance of the ocellus, I'm inclined to think is just due to the lighting angle -- narrow-angle sun from upper left, versus wide-angle photoflood from center right. Note the very different specular reflection from the surface of the compound eye.

Wim: at the time, I tried searching Google with fairly specific phrases but I did not find anything relevant. I tried again today using mantis eyes dark adaptation (which I thought I had tried before

), and got better results. On quick read, http://jeb.biologists.org/cgi/reprint/148/1/353.pdf suggests that the effect may be due to "massive pigment shifts in the ommatidia" (contradicting my speculation above). Thanks for the link that you provided -- I will read it later today.

Ken: I gather you're talking about things like UV-darkening sunglasses? Based on very limited observation, I don't think wavelength is a big factor here. Incandescent lighting caused lightening too.

It would have been great fun to explore all this in more detail, but unfortunately the mantis escaped sometime in the middle of the second night. I was keeping it "leashed" with a piece of dental floss tied in a snug loop between the middle and rear legs. That worked great for a long while, but imagine my surprise on the third morning when I found the mantis gone, and the leash lying limp although still perfectly tied! I am fascinated to imagine what body positions the mantis had to achieve, to slip out of that leash. Houdini could not have done better!

Very intersting.
Only a couple of hours for dark-adopted eyes?

Wondering if that happen every night.

My son has had quite a few similar species and we have never seen this even though they are in the living room. It is a wonderfull find. It would also be interesting to see if htis species hunts at nights, and if you can find other species see if there eyes change colour and if they hunt, then you may be able to say if it is just a side effect of another phenmomen or if it ia an adaption for hunting.