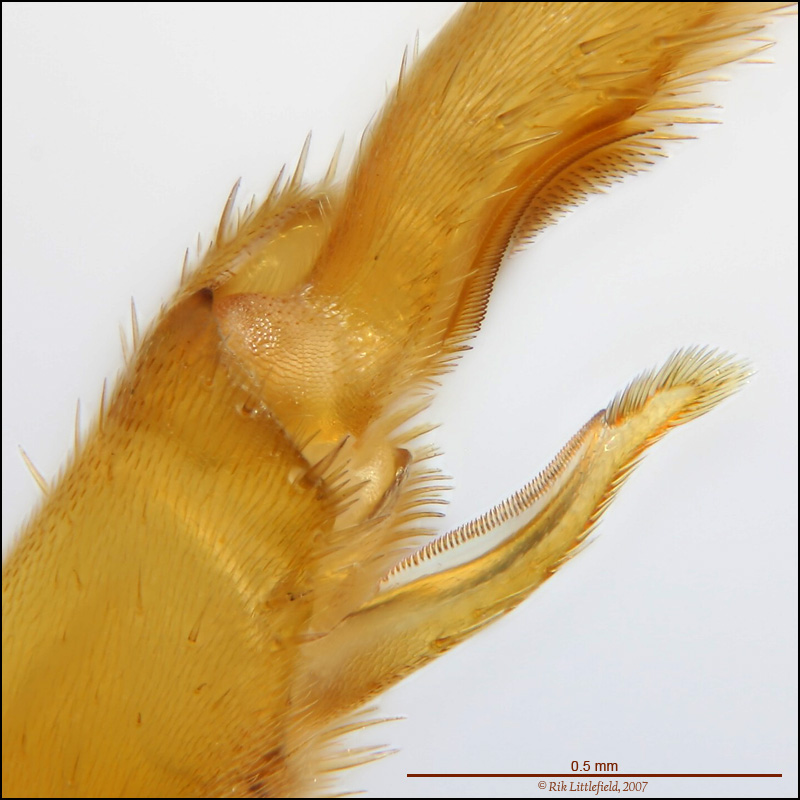 Somehow you folks got me started on grooming spurs. This is from one of the Polistes dominulus wasps featured in an earlier posting. The structure of the wasps' grooming apparatus is conceptually similarly to that of the Pogonomyrmex flying ants that I posted earlier, but the details are very much different.

Well if I had any hair to groom, I would be thankful for a comb but of course it would be better than lying in the driveway and licking yurself too!

An excellent closeup Rik. Incredible detail & sharpness. Awesome results for all your effort.
Take Nothing but Pictures--Leave Nothing but Footprints.
Doug Breda
Top

As Doug said, excellent detail and focus. I really like how you were able to get enough light through the subjects translucent body to bring out details on the opposite side. I assume some quality backlighting was involved?
Walt
Top

Thanks for the compliments, guys.

Um, gee, it's hard to say. The setup for this beast is illustrated here, over in the Technique forum. There's a gray card behind the subject, a Kleenex tissue tent around the subject and lens, and I just played with the fiber heads until the thing looked right. From the position of the lights that I remember, there would have been little or no direct illumination from in back of the focus plane. On the other hand, there would have been a fair amount from only slightly in front of the focus plane, which could act a lot like "darkfield" and brighten up the subject compared to the background.

In direct examination under a dissecting scope, what struck me was the crystal transparency of the lower part of the grooming spur, and I played with the illumination until that aspect came through in the photo.

Don't know what else I can say, Walt. I always hate to admit that it's a mystery why one of my pics came out good, but, um, it's a mystery?