A couple of days ago we happened to have some rain that produced a spectacularly clear rainbow. For a while it was a full arc with a bright secondary bow. It was very pretty!

It was also very interesting, because just inside the primary bow there were several smaller bows that I do not recall ever noticing before. 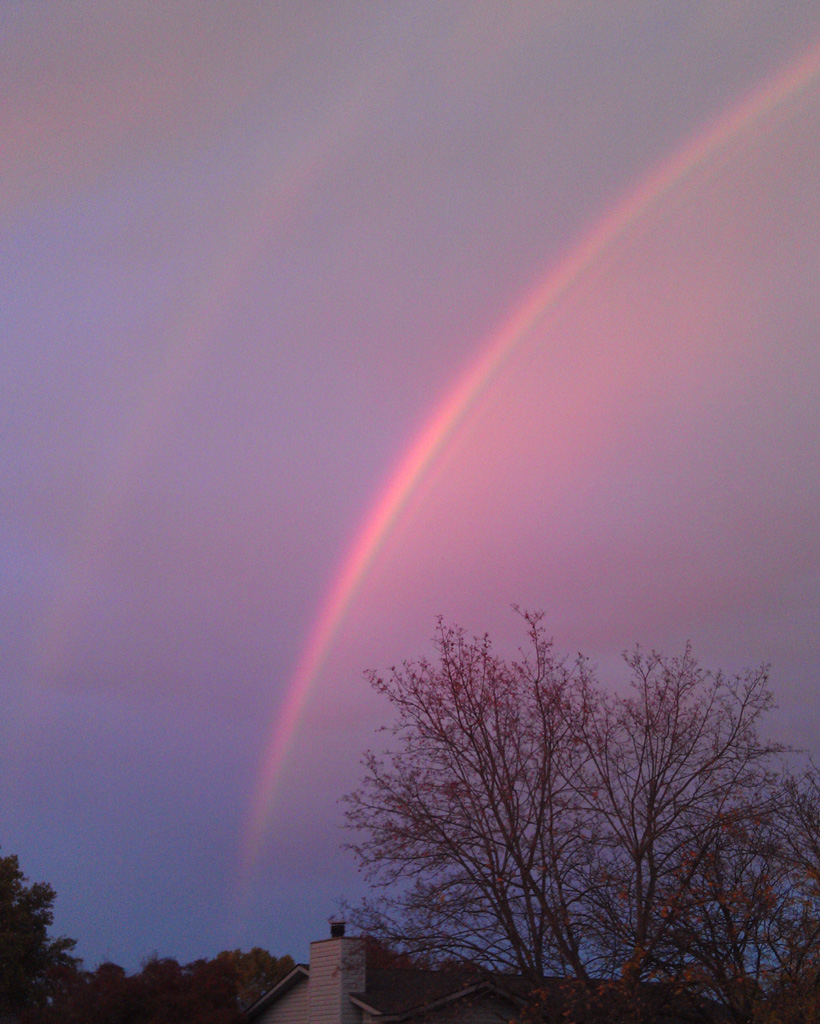 Rainbows have been studied a great deal, of course, and I assumed somebody would have written about these. So, off to the Internet...

It turns out that these "supernumerary arcs" are caused by interference effects, not by simple refraction and dispersion. In fact, https://en.wikipedia.org/wiki/Rainbow#S ... ry_rainbow says that

It is not possible to explain their existence using classical geometric optics. The alternating faint rainbows are caused by interference between rays of light following slightly different paths with slightly varying lengths within the raindrops. Some rays are in phase, reinforcing each other through constructive interference, creating a bright band; others are out of phase by up to half a wavelength, cancelling each other out through destructive interference, and creating a gap. Given the different angles of refraction for rays of different colours, the patterns of interference are slightly different for rays of different colours, so each bright band is differentiated in colour, creating a miniature rainbow. Supernumerary rainbows are clearest when raindrops are small and of uniform size. The very existence of supernumerary rainbows was historically a first indication of the wave nature of light, and the first explanation was provided by Thomas Young in 1804.

http://www.atoptics.co.uk/rainbows/supform.htm and the several pages around it have a lot more detail, including fairly detailed descriptions of mathematical simulations.

I found all this to be quite interesting because a) we don't often get to see clear evidence of light wave interference with our naked eyes, and b) I didn't know about any of this earlier.

I hope you are intrigued also.

PS. The Wikipedia article on Thomas Young is a good read also. I don't know if people were more prolific in those days, or if good new ideas were just simpler to think up. In any case, he certainly contributed a lot of them!
Top

Very interesting! I didn't realize it was an interference phenomenon.

Here's a double rainbow, both horizon to horizon, showing the same thing (I think) from three weeks ago. Saturation has been ramped up in Photoshop to make it more obvious. Both rainbows, and the extra arcs inside the lower one were very obvious visually. 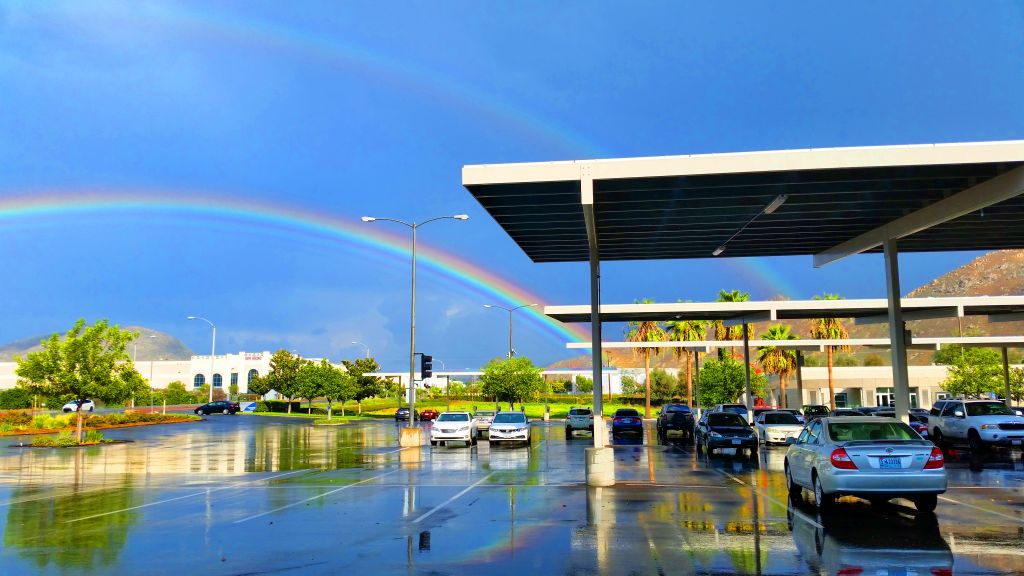 Fascinating stuff. I photographed some more or less related interference phenomenon last summer and have been wondering about those ever since. I'd like to post these images here if it's OK with you.

banania wrote:Fascinating stuff. I photographed some more or less related interference phenomenon last summer and have been wondering about those ever since. I'd like to post these images here if it's OK with you.

Thanks Rik, I hope I didn't raise your expectations too much. This is layman trying to understand stuff way beyond his reach 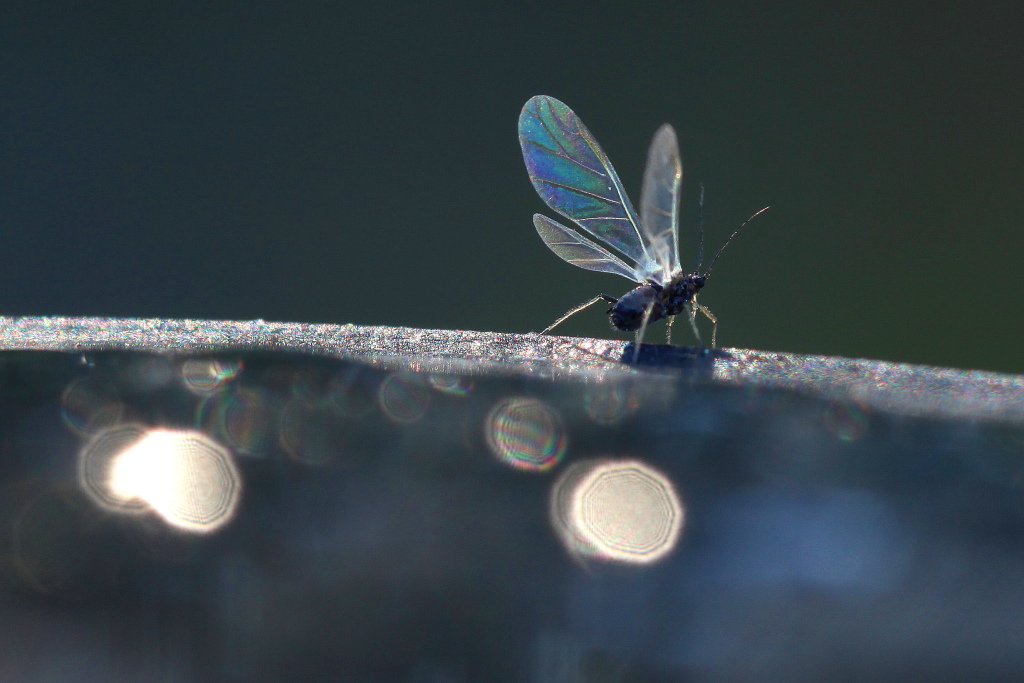 Those bokeh -type appearances caught my attention. Lots of things to wonder about already here. There is nice iridescence phenomena in the wing of the aphid. The rings of bokeh replicate the form of my apperture, that's simple, but already the inner circles suggests some interference phenomenon. Not so simple to explain anymore. Google didn't help here very much, maybe Newton's rings, maybe not.

I decide to photograph these creatures made out of light. This is the enviroment. The direction of the sun can be seen from shade of the aphid. It is very low angle with the first rays of sun. It is a bit rounded head of a pole made out of black plastic and there are droplets of morning dew on top of the pole. 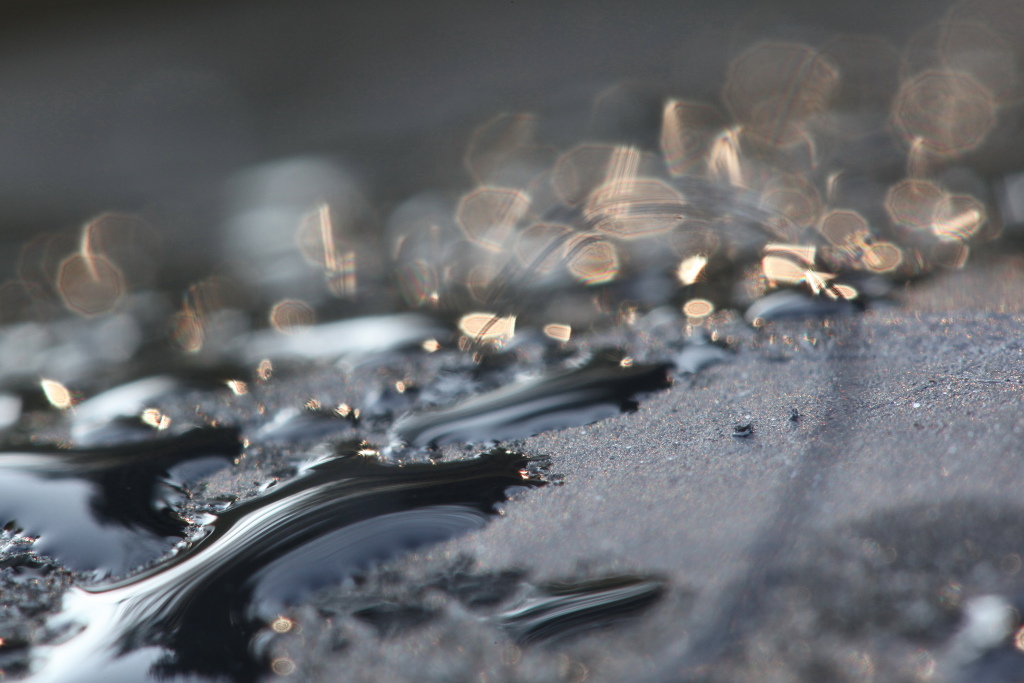 After a while and a little playing with my gear those shapes started to take weird shapes. I'd love to understand the genesis of these shapes. They seem to hover above the surface and seem not to be projected on any surface. I missed my bus this morning while trying to visualize this stuff in my poor head... so please help me. 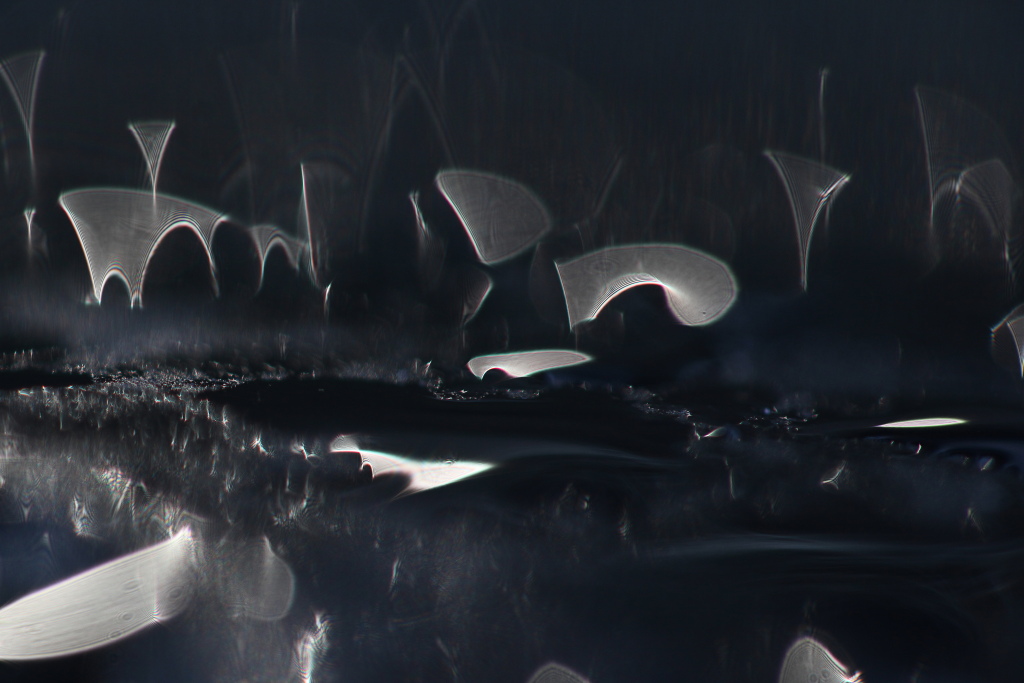 A couple of minutes and these figures faded as the angle of sun moved a bit. 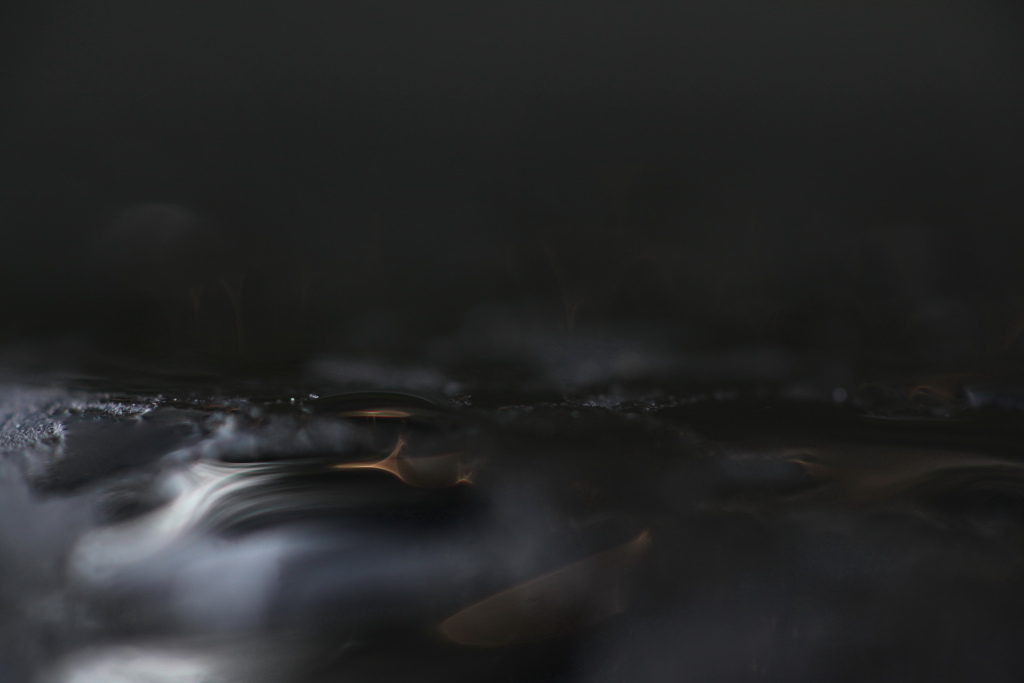 banania, these are lovely phenomena!

Yes, you are seeing interference fringes. The ones around blur circles are Fresnel rings from your lens aperture. See http://www.photomacrography.net/forum/v ... 786#146786 and the surrounding thread for some discussion of that. I'm guessing that the fancy arches are somehow due to the edges of water drops, but certainly not sure about that.

Thank You very much Rik!

There is still a lot lot more questions than answers but your explanations in the earlier thread about rainbow circles were very helpful. You showed in a very simple and clear manner how

- How a defocusing a lens "emulates" the interference phenomena of slits/appertures.

"The key thing to realize is that regardless of whether there is a lens or not, the rings become clear when the total wavefront error across the aperture drops to only a few lambda. As the wavefront error becomes smaller, you get fewer rings. When the error drops to only a fraction of one wavelength lambda, you get a central peak, and when finally it falls to zero, you get the perfect Airy disk"

I think I want to do some simple tests now. Thank you!

As your second link mentions, this is seen from a garden hose quite frequently. It is something that I have seen all the time when gardening, but never gave it a second thought!