Here's the stacking setup for the spiny spider I posted over in the macro gallery.

What you're looking at is a mini-tripod tightly roped to a post of the porch, with a floodlamp for main light & a crumpled aluminum foil reflector for fill, some masking tape on the lens so I could mark close/far limits and intermediate tics for focusing, and a remote shutter release to avoid unnecessary vibration. 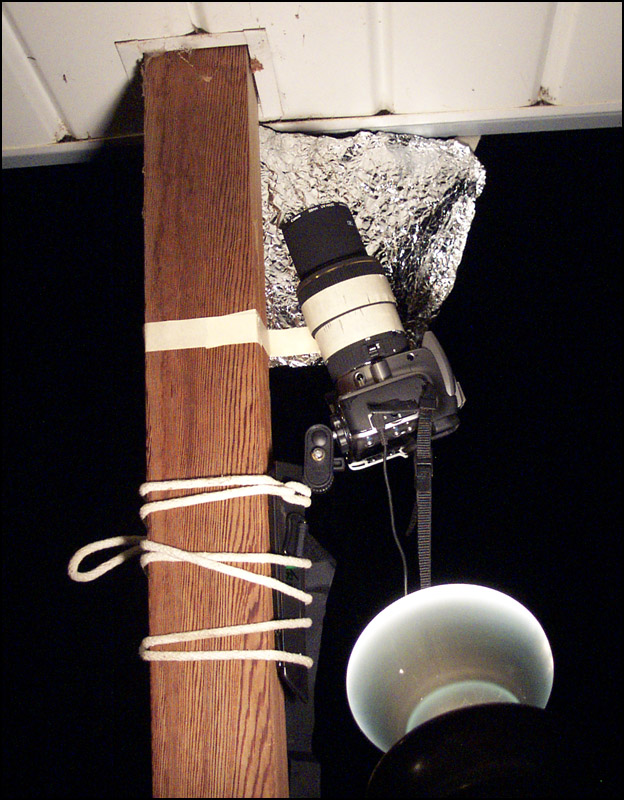 Shown below is a crop of the composite, with a single corresponding frame from the middle of the sequence. (There's a slight difference in color balance due to post-processing.) 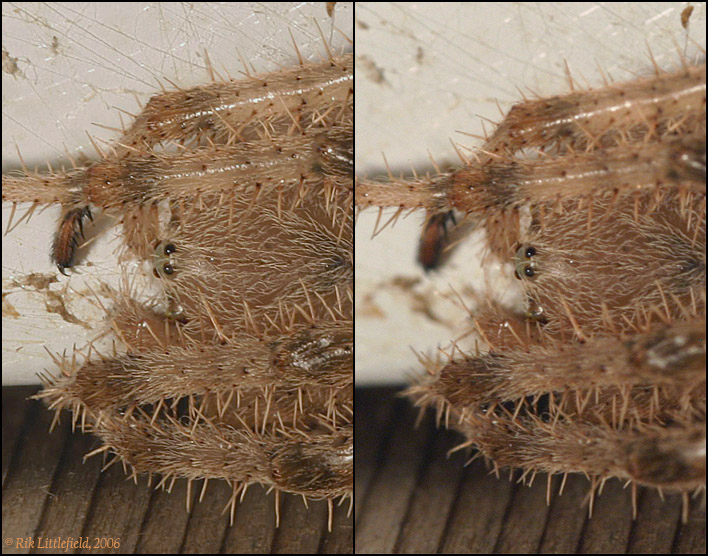 This was actually a pretty deep stack -- 32 frames. I could have gotten by with some fewer, but I wanted all the spines as sharp as the lens would capture them, and given the setup, it really wasn't much extra effort to shoot a few more frames than I really needed.

I used a fairly long shutter: 1/4 second per frame. Using such a long exposure guaranteed that I would get the same brightness from frame to frame. With a much shorter exposure, say 1/80 second, there's a risk of frame-to-frame variation because incandescent lamps actually flicker at only twice the line frequency, so 120 pulses per second in my case. (Caution: a few types of incandescent lamps actually flicker at only one times the line frequency, 60 Hz for me.)

Most stacking software includes some sort of correction for frame-to-frame brightness, but I've never been convinced that it actually works very well, so I try to avoid having to use it. (To work really well requires knowing the camera's brightness-to-pixel-value transfer curves. Since this varies from camera to camera and settings to settings, the software just uses some average guess that works kinda sorta OK.)

Now that's dedication to Macro photography and just plain getting a good picture. Thanks Rik.

What kind of lens is that? Did you have to move from left to right to get all the spider in as well or just zoom in/out? That tape idea is pretty cool, I'll have to remember that one.

Alas, however, My sister-in-law needed her lens back, so I'm back to no macro lens

If I could just find a reversing ring, I might try that.
Carl B. Constantine
Top

Um, yeah. I suspect that "dedicated", "unreasonable", "obsessed", and "insane" can all be points on the same continuum. "Dedicated" sounds nice -- thanks!

In current lenses, that would be a "Sigma 105mm f/2.8 EX DG AF Telephoto Macro Lens". I bought mine a couple of years ago. I think it's missing the DG, but that doesn't matter for this discussion. This lens focuses from infinity down to 1:1. You're seeing it at close to its 1:1 position, where the front of the lens sticks way out. It is fixed focal length (no zoom), so I adjust field of view by moving closer or farther from the subject. I positioned the tripod to fit the whole spider into one frame. What's posted in the macro gallery is a slight crop, just to eliminate some useless background. The pair that's posted above is a more extreme crop to show all the detail that's available in the original full-size image.

This lens seems pretty typical of lower-end "dedicated macro" SLR models, by which I mean lenses designed to work around 1:1 with no add-ons. On my Canon Digital Rebel camera, that means it'll do full-frame of an area that's only 22.7 x 15.1 mm.* Most lenses that include "macro" in their name are really what I'd call close-focusing, with maximum magnifications of 1:2, 1:3, or less, and corresponding frame widths of 45 to 65mm, or wider.

When you finally decide to take the plunge & buy a macro lens, be sure to ask the forum for info and sample images. I did not understand, when I bought this lens, that its image quality would be way less than is provided (for example) by the Sigma 150mm f/2.8 EX DG APO AF Telephoto Macro. On the other hand, the 105 is $230 cheaper, 1.7" shorter, and a full pound lighter. If I had to do it over again, I'm not sure which way I'd jump, but I would definitely want to know the options.

[*] But on the Canon film Rebel, full-frame would be 36 x 24mm. Getting hung up on lens magnification can be a trap, especially when you're comparing large-sensor DSLR and small-sensor P&S cameras. What you really care about is field width.[/size]
Top

You're just south of me in Washington (I'm on Vanouver Island). I'm going to have to hop the boarder one of these days and come visit you.

Dedicated is the word I would use, and I think it's more you :-)

The Tamron AF Macro I was using is 1:1 (note, not the DI model that's available now, the one before it I think). I stuck that sucker out at 1:1 and then moved the camera forward and back. But I tell you, I was pretty close to that hopper to get a pic. In fact, I don't think I could have focus on him at all at 1:1 any further back. 1:6 maybe and then gradually move in to 1:1 but I don't think that would work. But, I am new to the technique, so I'm probably doing something wrong.

It looks like in this picture, that you have almost a foot at 1:1 and it doesn't look like you can move the camera very easily foward and back to change your DOF.

Any more tips to share for us newbies ;-)
Carl B. Constantine
Top

Carl wrote:It looks like in this picture, that you have almost a foot at 1:1

The full frame width for the spider pictures is right at 30 mm, comparing wood grain that I can see in the pictures against the real post. So, lens magnification = 22.7:30 = 1:1.32. At that setting the lens focuses almost exactly 6 inches in front of the end of the barrel.

At 1:1, the lens itself gets about 1/2" longer, and the focus distance drops to a hair under 5 inches in front of the barrel.

You're right, in the setup shown above, it was not possible to move the camera once the tripod was lashed down.

So what I did was to look through the camera adjusting focus and camera position simultaneously until I was happy with the framing. Then I backed off 1/4" or so just to cut myself some slack, and lashed down the tripod.

With everything lashed in place, I turned the focus ring until I knew where the front of the subject was, and marked that place on the masking tape. Same thing for the back of the subject.

Finally I shot the stack "blind" by repeatedly tweaking focus to the next tic mark and triggering the shutter. That way I had to touch the camera only very lightly, and not at all during an exposure.

Rechecking my collection of image files, I see that I played with this critter on two consecutive nights. Quite frankly I can't remember, but I can imagine that the first night was mostly scratching my head wondering how I was going to do this. There's about 45 minutes between first and last frame, a lot of playing with magnification and exposure, and no usable stacks. The second night it looks I got down to business. 30 minutes to shoot four stacks: one at f/11 at about 1:2, two at f/11 and 1:1.32, and one at f/32 and 1:1.32 just so that I'd be sure to have something even though I figured the resolution would be pretty bad. (It was.)

What I posted out was from the second stack f/11 at 1:1.32. Reviewing the stacks now, both of them look OK.

Tips? Um... How about "It's not easy, and you're gonna have quite a few failures, especially with live subjects. Hang in there and keep trying different tricks until something works!"

rjlittlefield wrote:
So all told, a 1/2" difference in camera position shifts the magnification between 1:1 and 1:1.32.


rjlittlefield wrote: With everything lashed in place, I turned the focus ring until I knew where the front of the subject was, and marked that place on the masking tape. Same thing for the back of the subject.

So then, when you adjust the focus ring, are you not then moving the lens from 1:1.32 to 1:1 as you focus? Doesn't that then change the positioning of everything and the framing? The point I'm trying to make here is how do you compensate for that in HF?

I don't remember seeing a secondary focus ring on the tamron. I wacked it out to 1:1 and couldn't adjust the focus any further that I could see, thus the silly question.

I just need to have a clear picture in my head (I'm analytical like that).
Carl B. Constantine
Top

Carl_Constantine wrote: So then, when you adjust the focus ring, are you not then moving the lens from 1:1.32 to 1:1 as you focus? Doesn't that then change the positioning of everything and the framing?

You got it right. As the focus changes, so does the magnification. The image stays centered, but the field width can change significantly. In the spider stack, the difference in scale between foremost and rearmost images is about 9%.


The point I'm trying to make here is how do you compensate for that in HF?

As mentioned in an earlier topic, HF automatically compensates for it by slightly adjusting the scale of each image, based on matching in-focus detail between adjacent images. The total 9% scale difference between image #1 and image #32 is only 0.3% per image pair, really a very small amount and no problem at all for HF to handle.


I just need to have a clear picture in my head (I'm analytical like that).

I understand completely -- I work the same way.

I'll be happy to discuss the fine points of optical geometry as they apply to stacking (not a joke, I actually will be), but it'll have to wait a couple of weeks 'cuz I'm about to get tied up with other stuff and not be able to post.

In the meantime, find some unmoving subjects and play around on your tabletop where things are nice and controllable. Even without a macro lens, your normal lens near close focus and wide open should work fine for doing some good experiments.

Suppose, for example, that your lens focuses at 18". Lock the focus at that distance and shoot a 2" deep stack by sliding the camera backward 1/10", 20 times. This will give a stack that in some ways is pretty similar to my spider -- total 11% scale change in steps of about 0.5%.

One caution: when doing this experiment, be sure to stick a nice featureless background behind your subject. If you have significant background detail in this situation I just described, then you're liable to also have a significant problem because the total scale change at subject will be 11%, while the scale change at background may be much smaller. HF essentially assumes that all the detail it has to deal with is at the same scale within each image, although the scale can change between images. If the relative sizes of things within an image change very much, you may get strange effects.