It sounds a bit incoherent, but that was certainly my first reaction when this cloud of flying things dive-bombed my head as I was out hiking a couple of days ago. 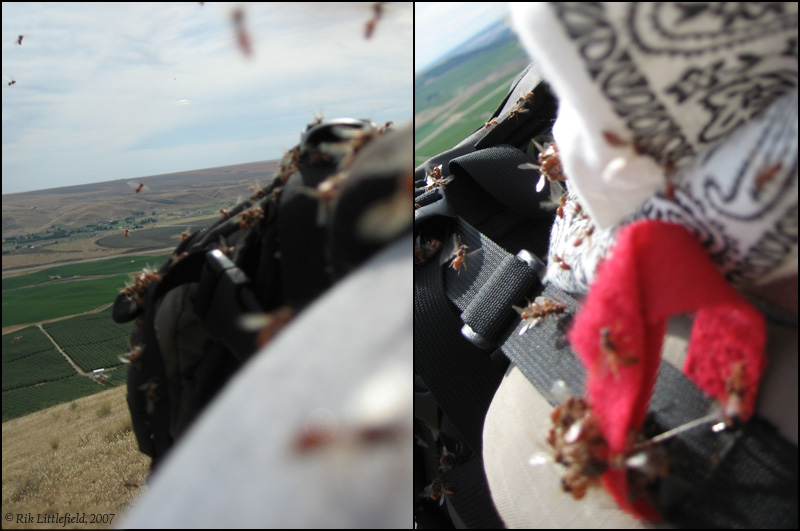 At first I thought they were some sort of predatory flies, dropping in to make me dinner.

But then some of them got around my face, and inside my glasses, and when I could see them, I realized "Oh <bleep>, those aren't flies, they're wasps!"

It was then that I decided to run for safety, or at the very least, far enough down the trail that the swarm could declare victory and go back to doing whatever it is that little wasps do in this part of the country.

But that didn't work. Most of the <bleeping> swarm stayed right with me. On my arms, on my back, on my hat, even in my mouth -- I killed two by drowning! "Aiiiiieeeeee!!!!"

I catch on a little slow sometimes.

About 50 yards down the trail, it gradually dawned on me that I wasn't getting stung. I wasn't even getting bitten.

In fact, not much bad at all seemed to be happening, except for the sheer annoyance of having apparently hundreds of these things buzzing around my head. "What's going on here?"

For posterity's sake, I whipped out the camera and snapped a couple of shots over my own shoulder. (Sorry for the focus -- apparently I forgot to push the "macro" button.)

Then I hauled out an empty water bottle and collected a few of the critters for later examination.

Ants, they were. Flying ants.

All I can guess is that these critters stay together by swarming around distinctive colors or odors, and for whatever reason, I was the highlight of their day. You can see in the picture that they seem particularly attracted to the short piece of red Velcro on my pack strap.

I've posted some closer pictures over in macro.

Anybody who can offer some more information about what these things are and why they were mobbing me, I'm all ears!

Ants reproduce by swarming....A nest will raise dozens to hundreds of males and females. On a given day when conditions are right, all the ants of a given species will have their reproductives (males and breeding females, aka drones and queens) fly out at once. Basically there is a mob scene as hundreds of drones (males) try to mob and mate with females. They tend to cluster at high visible points, simply as a way to get together. apparently they decided you were a high visible point, and used you as a gathering point! Congrats, this is a behavior I've only seen twice, and never photographed.

Gordon Snelling can probably tell you more about this if you PM him a link to these photos.
Mike Broderick
Oklahoma City, OK, USA

The imagej to the left looks as though it was taken from an aircraft! How high the (bleep!) up were you Rik?

Be glad it was the velcro or the hight they were attracted to. Mike said they were or might be mating, so be gald it was with one another that they chose and not you, if it were then you really would have been (bleeped!)

An excellent story Rik. I know when some of the ants are mating here in NH you can look down the street into the sun and see thousands flying around. It is like all the ants in town get the same cue to mate...right temp & humidity.
Take Nothing but Pictures--Leave Nothing but Footprints.
Doug Breda
Top

Thanks, guys. I'm familiar with mating flights of ants, but this mating storm thing is new to me. I've run into some kinds of small flies that congregate over white spots, but I've never noticed the ants around here doing anything like this. Of course these particular ants were in an area where really I don't spend a lot of time, so I'm not surprised to be surprised.

Ken, I'm pretty sure both my feet were on the ground when I took that picture. That'd put the elevation of the camera at around, um, 60 inches above local ground level.

More seriously, the green fields in the background are probably about 700 vertical feet lower. I was very near the top of Badger Mountain at the time. Its maximum elevation is only 1579 feet, and the valley floor to the south is mostly about 800 feet.

The cool thing about Badger Mountain is that, due to a local grassroots effort, there's now nearly a full square mile of mostly native habitat now protected from development. I keep thinking that I need to get it posted out as a Favorite Location, but this time of year, it's not exactly photogenic by normal standards.

There's a web site at http://www.friendsofbadger.org that has some good shots.

Rik, I’ve been through something similar two or three years ago in my own backyard wearing just … erm … nothing (because I was leaving the swimming pool). I was fighting them with my towel … what took longest was to get them off my hair. What a horrible experience! I’m still getting goose bump if I only think back …

Well, I think I'll probably remember my own experience as "glorious".*

Of course things did get a lot better after I realized (ah, what a relief!) that really I was not going to have to hike off the mountain temporarily blind from a zillion wasp stings!

[*] Viewers of Dan Gilbert's TED talk will understand the peculiar twist in that statement.[/size]
Top

The thing that really struck me was this:


(Sorry for the focus -- apparently I forgot to push the "macro" button.)

What is the world coming to?