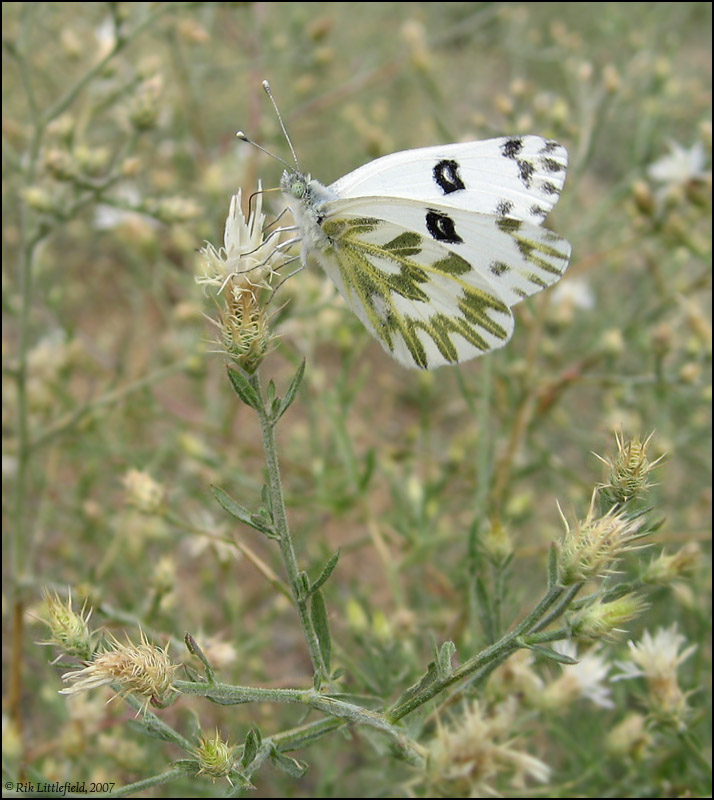 This is a representative adult of Pontia beckerii, to go with my earlier post about the Becker's White chrysalis.

The plant that it's feeding on is also interesting. I believe this is "diffuse knapweed", Centaurea diffusa, one of the many Centaurea species accidentally introduced from Eurasia in the early 20th century. Diffuse knapweed is another one of those invasive aliens. This one is described by http://el.erdc.usace.army.mil/pmis/plan ... taur3.html as

Reproduction is exclusively by seed. Being allelopathic, it can dominate disturbed areas almost to the exclusion of other species. It can be distinguished from spotted knapweed which it closely resembles by its spine tipped involucral bracts.

By the late 1980's, 1.3 million ha were infested with diffuse knapweed in western U.S. It rapidly invades overgrazed rangeland and other disturbed sites, and is capable of establishing in undisturbed communities. The foliage contains cnicin and is highly unpalatable resulting in overgrazing of remaining vegetation in rangelands where diffuse knapweed has become established.

So, very briefly, this stuff takes over and nothing much eats it. But look on the bright side -- at least it provides a nectar source for these native butterflies, which would otherwise find that pickings get a bit slim this time of year.

Half opened wings as lower part of the photo gives dimension to whole impression.
By the way there are similarities between flowers on your and my photo of Pontia butterfly. (Although mine looks more dried.)

A very beautiful butterfly and photo Rik. The butterfly colors match very well with its` enviroment.
Take Nothing but Pictures--Leave Nothing but Footprints.
Doug Breda
Top

The butterfly is a very attractive one....

The scam this weed has going is a good one....Colonize part of an area and make the rest be overgrazed so that you can move in there as well! Between overgrazing, contributing to obesity (including mine), and being greenhouse gas contributors, I sometimes think cows are destroying civilization!
Mike Broderick
Oklahoma City, OK, USA

So lets have a bar b que?

, now we know what was in the "sack" on the stem. Knapweed souds a bit like our Kudzu, nothing much eats it and it is taking over, especially on power lines.