Paper wasp guarding the nest (and other pics added)

Paper wasp guarding the nest (and other pics added) 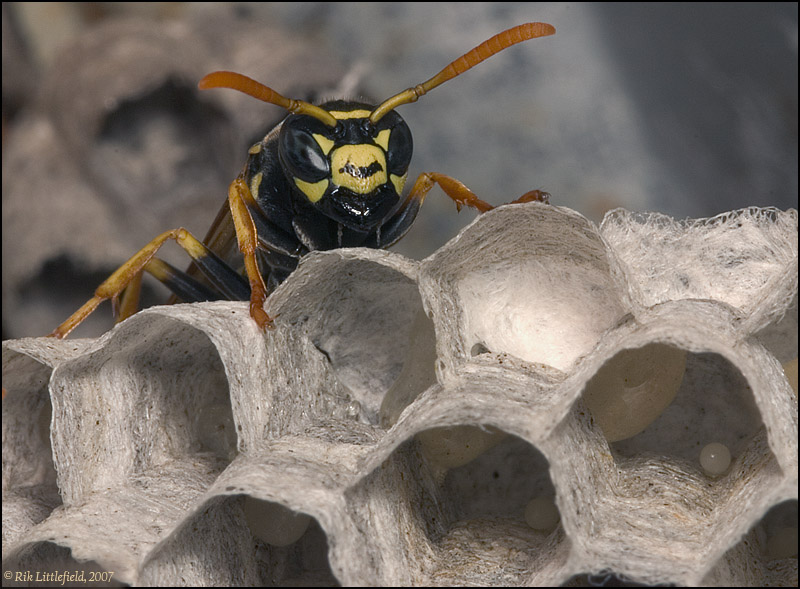 Every summer, these paper wasps start a nest in my corrugated steel garden shed. Sometimes two nests. Or three, or more. One year I think there were six. Usually the nests get to be just a few cells before something goes wrong and mommy never comes back from hunting. (There's a small abandoned nest visible in the background, upper left.)

But this nest seems to be doing pretty well. As of dusk this evening, there were 8 adults and a couple of hundred cells, a dozen of them capped over with silk. So things should be just humming along, real soon now.

I thought this picture had a nice angle, maybe a bit different from what you usually see. Enjoy the view!

By the way, I don't understand all of what I'm seeing in this picture. The left-most couple of cells clearly contain larvae. I presume the two rightmost cells in the second row contain eggs, on the cell side toward the bottom of this picture. But then what's the large amorphous lump of light tan stuff in those same cells? Betty?

Seems DOF is deep at least as deepness of the nest.

double athwart I would say.

Besides being an excellent macro image, it's an exceptionally good natural history photograph. I really like this one Rik - well done!

ps - will be interested to read views/comments on those "eggs".
Top

Rik - as Bruce already wrote, this is an excellent documentary photograph which I think can´t be done better.

What are the lumps in the corners of some of the cells? That was the first question I asked myself too when looking at your pic before having read your text.
Well, I haven´t seen this before. (I don´t live in an area of Germany where polistine wasps are commonly encountered. But where I grew up we had nests almost every year under a roof of a shed near our house, quite similar to the situation you describe, and I remember them flying in that particular way with their legs hanging down).
But I know that there are quite some parasites/parasitoids that effect the adults and the brood of polistines. So I would tentatively speculate that these lumps could have something to do with a parasite/parasitoid.
Sorry, ad hoc I can´t be of much help on these "lumps" by judging from the photo only.
(But there are some American researchers you might want to ask who have worked on polistines and might be able to recognize the structures when looking at your excellent photograph.)

The following might be interesting, if diggin´ Rik hasn´t digged out that himself already

. You report 8 adults on that nest and according to the time of the year and your place, it could still be the first brood sequence in the cells, or have there been any eclosions from capped cells yet?. If not , the 8 adults should be overwintered females that have aggregated to form a foundress association. Polistines often show this behaviour.

Respect Rik! Where the heck did you got that much DOF from?

Best,
Sven
If you are out there shooting, things will happen for you. If you're not out there, you'll only hear about it. - Jay Maisel
Top

The large DOF is entirely from stopping way down, intending that the image would be published only at the resolution you see here.

At f/22 marked (f/44 effective!) the full size 3072x2048 image suffers horribly from diffraction. It is so fuzzy that there is literally no more detail available than what you see here.

To partially compensate for the diffraction blurring, I strongly sharpened the image using Photoshop's "unsharp mask" filter. This exposes finer detail than one would see in the unsharpened image. Essentially, the filtering boosts the modulation transfer function of the lens for fine detail, where otherwise it would be falling off from diffraction. It's a way of fighting back a little against Abbe's rules

The result is an image that looks almost as sharp as what a wider aperture would produce, but only to the level of detail shown here.

Betty, thanks very much for the additional information about these wasps. I had not heard before about "foundress associations". I will check the nest this evening after they have quieted down.

If you have contact information for any of those researchers you mentioned, please pass it along to me by email and I will see what they can tell us.

A very informative image for me as well Rik. I have been stung by these many times and don't push things to look inside.
Walt
Top

I confirm 8 adults and no cells with obviously broken silken caps. This is based on examination only through a low-power magnifying glass (8 inch focal length). I waited until well after dark, but under my lantern the adults were getting active enough that I shied away from using my 10X doublet.

PS. I cannot tell whether these are Polistes dominulus, as you inquired by email. Comparing against the image shown in the Wikipedia article, these have substantially more black, as shown in the image below. (Sorry for the low quality; it was the only one I had handy that shows the whole body.) On the other hand, they look very much like the ones shown at http://www.cirrusimage.com/Bees_wasp_polistes.htm, which are darker than Wikipedia's.

The picture is upside down of course. It is not natural, but at least it does not provoke nausea! 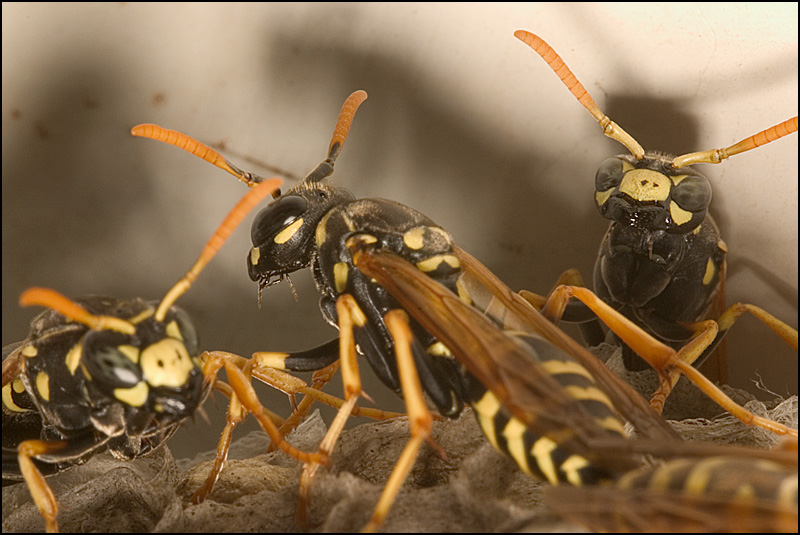 Wohoo Rik, Martians discussing their next move to conquer Earth.

Are they not getting nervous with that huge lens in front of them?

After a while, they do start moving around to always face the intruder. That's about the time I become more cautious.

There's everything to like about the top image, Rik. Composition is perfect, sharp where it needs to be, and I love seeing the eggs, too. Great job, my friend!

Thanks for that night shot of Polistes (You´re a brave man!:D

With colour markings it´s sometimes tricky as there can be quite a lot of variation, and the taxonomists have to find out which of these colour criteria are stable and which vary within a species. From what I see on your second pic, which I think is fine, now, I must say that your Polistes looks quite similar to the European P. dominulus.

As said before in the email, I have no over-all view of the native North American species, but if the information given in the Wikipedia article, that you linked above, about P. dominulus:

as it is black strongly marked with yellow, and quite different from the native North American species of Polistes

is correct, we can infer that there is no native North American species which that closely resembles P. dominulus, and on the understanding that there is no other introduced similar species, I am inclined to say that we could cautiously and preliminarily

ID yours as P. dominulus.


Yes, my first thought, too

If you are out there shooting, things will happen for you. If you're not out there, you'll only hear about it. - Jay Maisel
Top

Not brave, just a good judge of character.

These wasps do not seem very aggressive, and even if they attack en masse, there are only 8 of them!

Here are a couple of pictures that may help with ID of the wasps or what's in the cells. 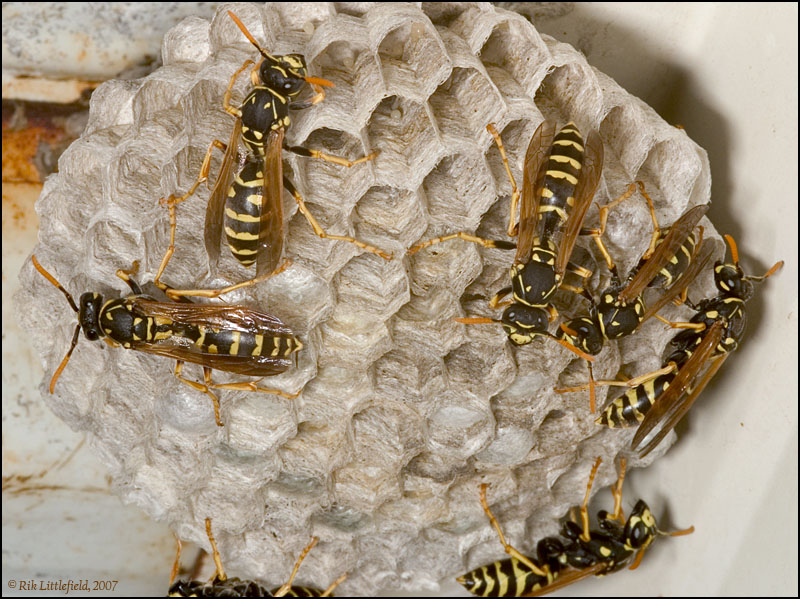 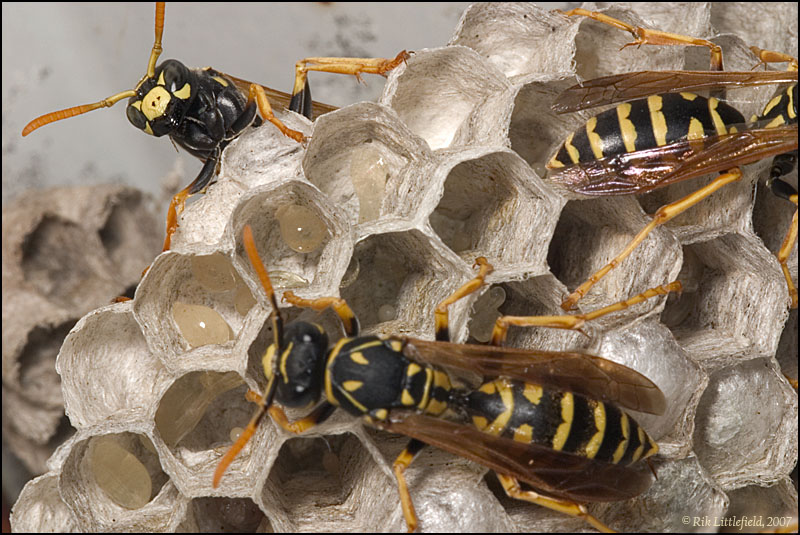 Same technical as before.