Geum is a genus of plants commonly called "avens". They are in the same family as roses and apples, but instead of producing a single fruit like those plants do, avens form a large burr-like assembly of seeds that each come equipped with a single hook suitable for grabbing hair on a passing animal.

Shown above is how the hook forms. As described in "Flora of the Pacific Northwest" (Hitchcock, 1973, pg 212), "styles strongly geniculate and jointed, persistent portion the longer, hooked at tip".

In other words, the female part of the flower, which receives pollen, is formed into a long basal section that ends in a hook, followed by a shorter section that contains the stigma, which is shed as the seed matures. On the left side of the image is a slightly less mature seed, with its stigma section still attached; on the right side the stigma section has been shed and all that's left is the basal hook.

Bear in mind, "basal" is a relative term. That hook is still quite some distance away from the actual seed: 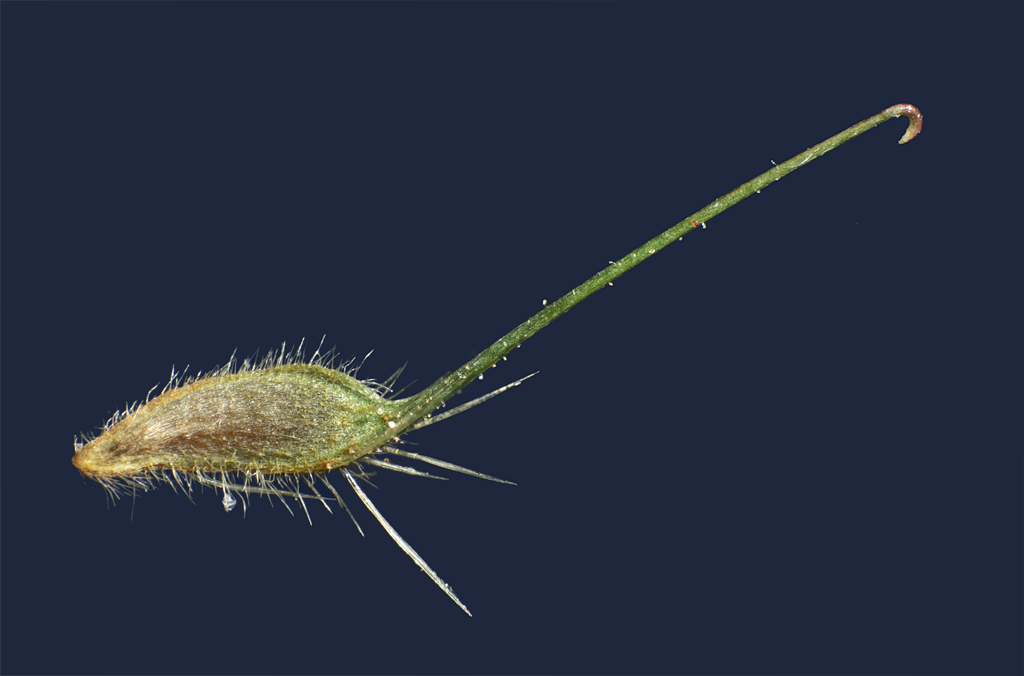 Moving farther out, here is an entire burr, with its front removed by pulling seeds away from the central core. 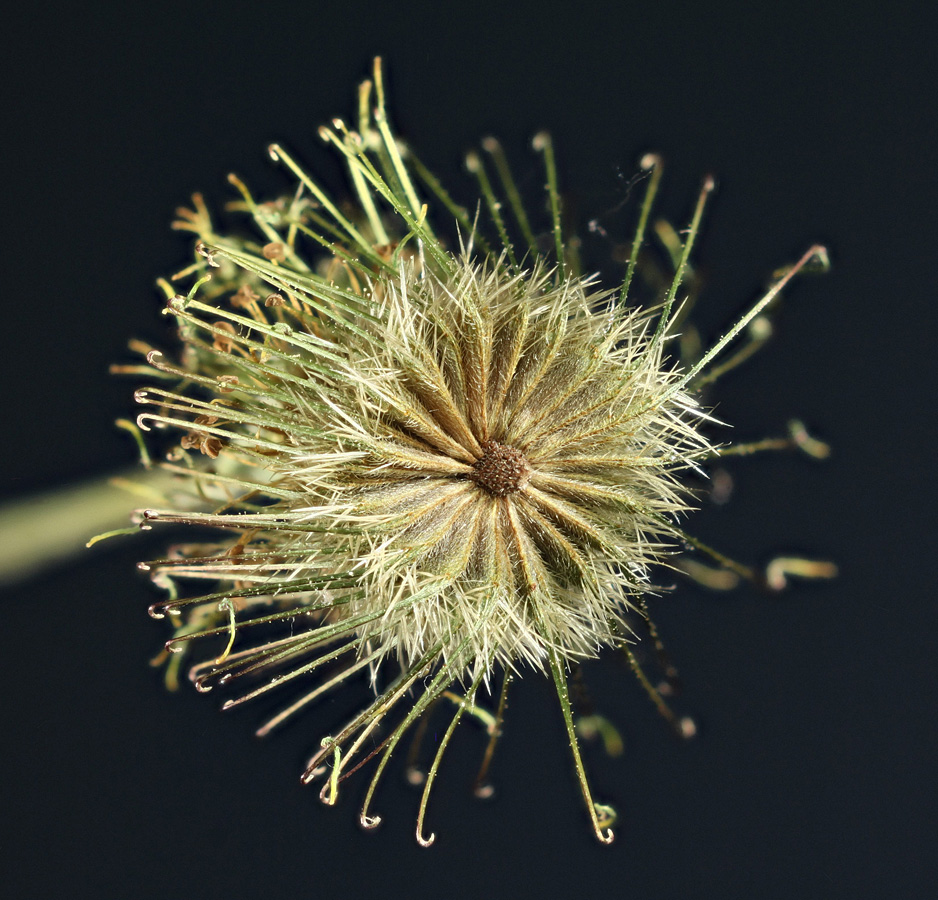 Moving in again, here is a crop of the above, sized to include a little more than the length of one entire seed, including its hook. On the left side of the image I believe you can see some of the stamens, thoroughly dried up and devoid of pollen at this point. 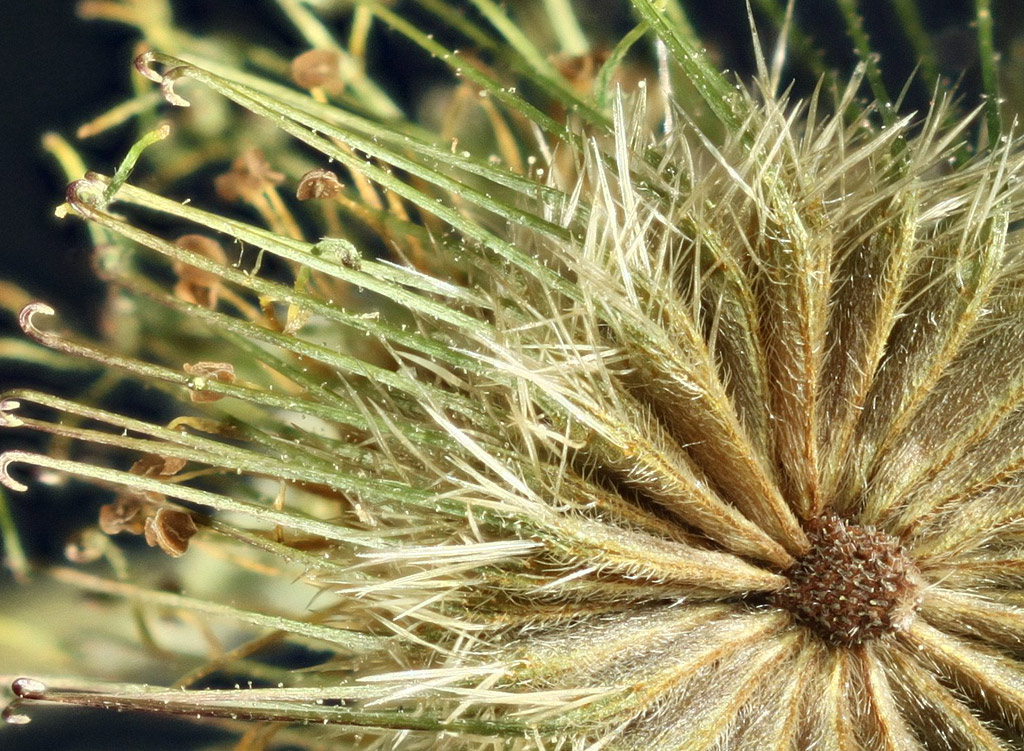 Length of each single seed is about 8 mm, including its hook.

These are Geum macrophyllum, the "Large-Leaved Avens". They're from that trip I took to the mountains last week, having sat in a vase of water since then. I guess they're not completely dried out, judging from the number of live aphids that still haven't left them.

Identifying this plant was a bit amusing. I didn't bring home much material, and I struggled to identify what I had from just the burrs in hand and vague memories of brief glances at the rest of the plant. Finally I found the right place in one book, then in another book the detailed structure of the burr nailed it down. A few minutes later -- and a complete coincidence as far as I know -- my wife came in from our backyard garden, carrying burrs that looked remarkably similar to what I had in hand. Fortunately she keeps really good records. It too was a Geum, 'Lady Stratheden' for whatever that means, planted in 2006. For all the delicacy of its name, however, the garden Geum has a much more robust flower. Here's the comparison, 'Lady Stratheden' on the left and its wild cousin Geum macrophyllum on the right (complete with aphids 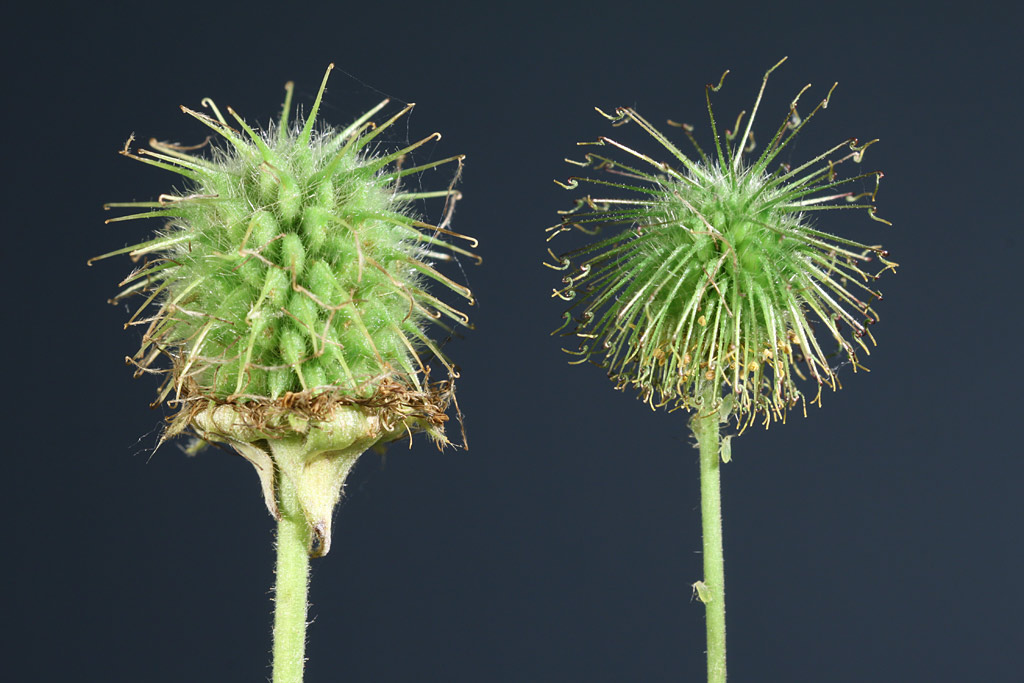 beautiful and informative! thank you for sharing Rik

Thanks, Carmen -- I'm glad you found it interesting.