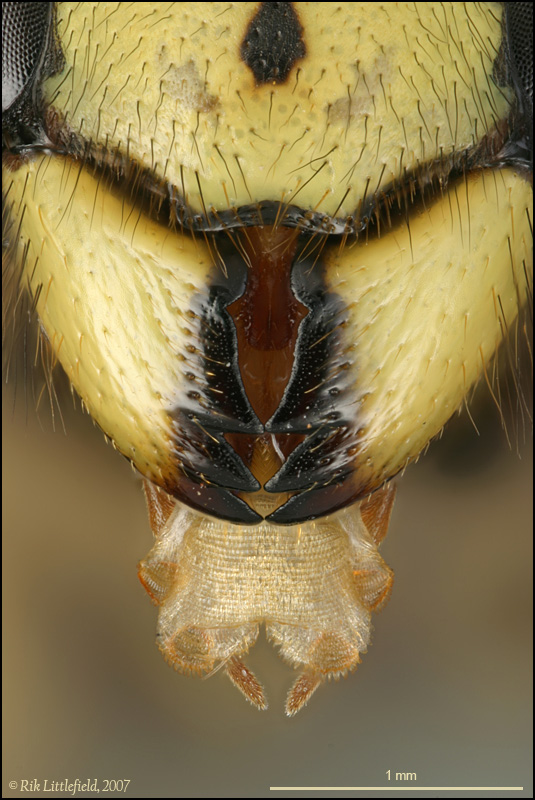 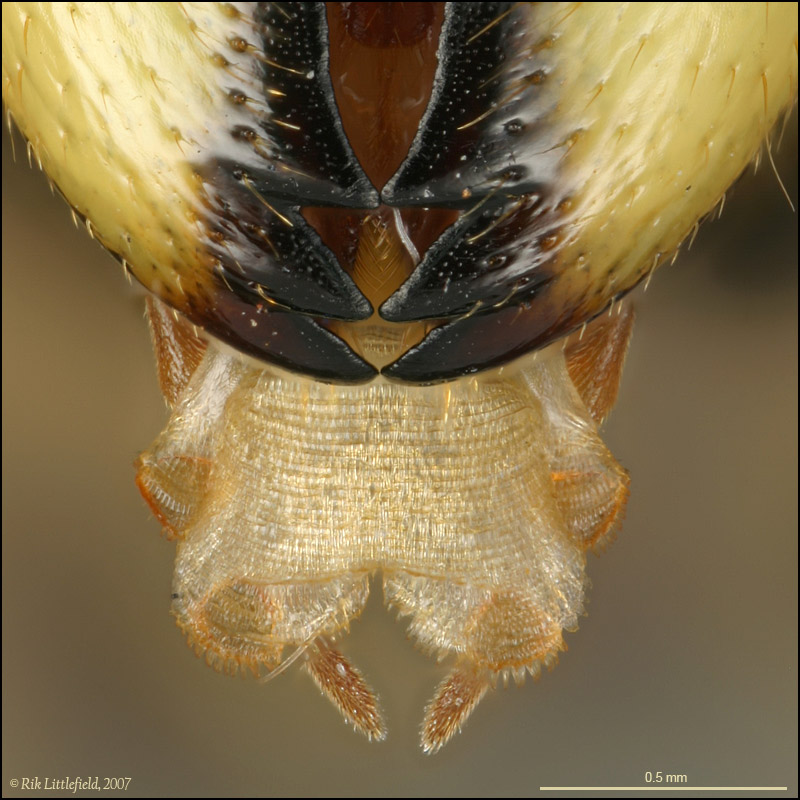 Normally I follow the "macro photographer survival technique" of never trying to work a subject that Charlie Krebs has already done.

But neither of his truly extraordinary yellow jacket faces (here and here) shows off this particular bit of anatomy.

Fact is, I didn't know it existed until tonight, when I was trying to figure out what to do with this particular corpse, which apparently died sticking out its tongue at the offender.

The thing I'm calling a "tongue" is the four-lobed fan-shaped organ that's behind the mandibles and in front of the two palps. It seems to have a fairly elaborate structure of its own.

If anybody has a good reference for the anatomy of wasp mouthparts, perhaps they can pass it along? I think it'd make interesting reading. (Yeah, I can imagine what you're thinking -- but you should see some of the other stuff I consider interesting reading.

Hope you enjoy the pictures!

Great pictures Rik! What are the other structures behind the "tongue", the two furry long awl shaped things?

"Yeah, I can imagine what you're thinking -- but you should see some of the other stuff I consider interesting reading."

The ingredients list on a sauce bottle should keep you enthralled for hours then?

The ping-pong ball lighting system has brought out astonishingly subtle detail and texture right across the image. The satin-like sheen on the complex and finely detailed "tongue" is particularly unexpected - very interesting.

Rik - An excellent project in every respect and unquestionably worthy of the same respectful genuflection afforded to a CK masterpiece.

Rik, I go "Wow!" as well and indeed really do enjoy this gorgeous work of yours again. For me an eye candy it is to look so closely at the mouthparts of this Vespula sp.

Ad hoc I can´t recall a good reference that deals with the mouthparts of vespines in particular, but later today or on Monday when I visit my library I will have a look into some books on vespines I know to see If they provide something useful about mouthparts for you.

) just found an instructive drawing of the European hornet´s (Vespa crabro) mouthparts in one of our own books right behind me on our bookshelf.

So I delete my initial reference proposal ´cause this drawing is more adequate. Rik, I will scan it and send it to you via personal message since I don´t wanna violate any copy rights.

Excellent photos Rik. Incredible detail throughout the whole picture. The "tongue" looks like a good organ for lapping up soda at the backyard BBQ

WOW!! How close is that?? Super shots

Today is the tomorrow you worried about yesterday... and all's well!
Top

DaveW wrote:Great pictures Rik! What are the other structures behind the "tongue", the two furry long awl shaped things?

I believe those are the "labial palps". They are multi-function organs that combine manipulation with an assortment of mechanical and chemical sensors. Kind of like fingers that also taste and smell.


The ingredients list on a sauce bottle should keep you enthralled for hours then?

Minutes, at any rate. Actually at the moment I'm enthralled by a description in a book on structures, of how trees cleverly grow so as to prestress the outer wood and inner wood against each other -- by around 2000 p.s.i. of tension, it's claimed. This reduces the maximum compressive forces that cause the wood to buckle and break, and roughly doubles the strength of the tree against wind loading. Who would have thought? *

There is so much to learn -- truly, boredom will never a problem!

PhilH wrote:WOW!! How close is that??

Thanks for all the compliments, everybody! 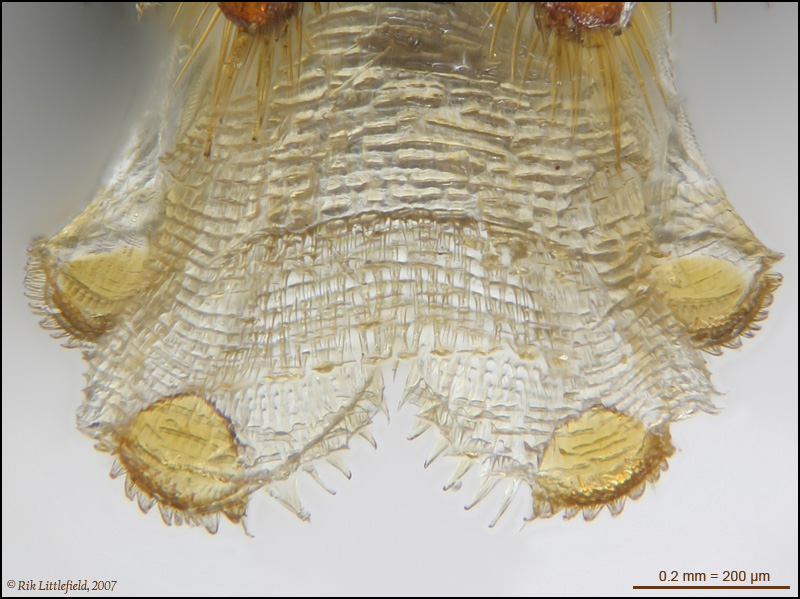 Bruce Williams wrote:Now I'm eager to see a side and ventral view to complete the set

All things in due time, Bruce.

For now you're going to have to settle for this even closer, backlit view. I think it does a pretty nice job of showing how membranous the tongue is.

Thanks to Betty, I now have some great drawings of Vespa mouthparts. If I am reading them correctly, then what's shown here is actually two slightly separate structures (and the very tips of a third, at top of photo). The two large central lobes are termed glossae (sing. glossa), while the smaller outer lobes are paraglossae. (I have not investigated enough to know what the two dark tips at top of photo are.)

It was an interesting challenge to get the tongue separated from the palps so that I could take this picture. I suppose I could have dissected the specimen, but I wanted to leave everything connected so that I could shoot other pictures later. What eventually worked was to lash the specimen to a chunk of balsa with sewing thread, and simply tuck the palps under the thread! (While I was doing this, the tongue pulled out a little farther than it had been, exposing those two tips that used to be hidden behind the mandibles.) Then I lowered a piece of white index card into place to provide the backlighting. What you're seeing here, and in both the earlier pictures, is upside down from the way it was actually shot.

These are incredible images Rik. I delayed my response in hopes of finding a reference for you, but all I have on hand is my National Audubon Society Field Guide to North American Insects and Spiders. This book does provide an illustrative drawing, but not in great detail.
Sue Alden
Top

Rik that's an amazing image - so delicate and beautifully detailed.

Well Rik, Charles is darn good, but you are the master of the extreme macro, these are supurb! What kind of indicator allows you to move accuratly at .00025 inch increments? When you give an extention lenght is it measure from the objective threads to the camera body or the film plane?

The setup I'm using is almost identical to what's shown here. Motion control is using a machinist's mill table, which moves 0.1" per turn of the handwheel, marked as 100 tick marks of 0.001" each. When I write 0.00025", what I really mean is 1/4 of a tick mark, which I eyeball through a 2.5X plastic magnifier mounted to focus on the index mark. I adjusted the slides on the table to be looser than they would be for machining, so there's essentially no stickiness in the movement. Individual steps probably vary from 1/3 to 1/5 of a tick mark. This is at the edge of the equipment's repeatability, but it's good enough that I've never gotten around to doing anything better.

At this magnification, vibration is the biggest problem. I run with mirror lockup (1.5 second delay from mirror up to shutter open), and I turn down the illumination and ISO setting far enough to make a shutter time of at least 1 second. These shots were at ISO 100, 3.2 seconds. The long exposure gives time for the high frequency vibrations from curtain movement to die out. Turning down the illuminator intensity also turns down its fan, which reduces vibration from that source.

One might think that the long exposure time would greatly slow down the whole process. But it doesn't, because there are so many other things that take even more time. I rechecked the original images. Overall rate for the stack was right at 7 frames per minute. So the actual shooting time for this image was about 9 minutes. That's a very small portion of the overall couple of hours that it took to prepare the specimen, set up the focus, framing, and lighting, process the stack, and post-process the image for posting.

About the extension, what I'm quoting here is from sensor plane to mounting shoulder on the objective. 150 mm is the design spec for this objective, which is designed for "160 mm tube length" but that's with the image formed 10 mm down inside the tube.

The extension is not critical. In theory there's some loss of image quality due to added aberrations if the extension is not right, but low NA achromats turn out to be surprisingly tolerant. (See the discussion here.) If I want a little more magnification -- most of which is "empty" -- then I'll happily stretch the bellows to full extension, which gives about 240 mm and something like 16X onto the sensor.

Regarding vibration, everybody seems to go to great lengths to damp out camera vibration but I sometimes wonder if subject vibration is given the same attention?

I note in your link you say "the beetle is glued to a small strip of copper that's pinned into a balsa plate" and I noted that George Dingwall used a straightened paper clip on one of his images for mounting the subject. If these are cantilevered set-up's could not these be a source of subject movement, although I have to say from everybodies pictures I have not detected this.

It's rather like the argument about vibration reduction lenses, they only mitigate camera shake, they do not reduce subject movement at slower shutter speeds. If the subject moves slightly no matter how stable the camera the result will be a blurred image.

Even for low level magnifications there used to be devices sold years ago that fastened to your tripod socket and provided a specimen holder on the end of a rod so both specimen and camera were linked together and so both maintained station no matter how much the assembly shook.

I remember Oxford Scientific Films, who did a lot of British TV ultra close-up work saying they had constructed an optical bench on which both specimen and camera were mounted together and claimed they could take pin sharp pictures even at sea on the heaving deck of a boat because both subject and camera moved in unison.

I sometimes wonder if these high magnification set-ups would be better constructed on some sort of optical bench so both subject and camera were both on the same sub structure, plus the lights also fixed to this so the lighting moved in unison too with any slight movement?

Also I note these are never mounted on any form of vibration isolation platform. Whilst a large concrete block cast on a bed of sand may not be too convenient, I did read of one DIY one constructed from an old inflated car tyre inner tube with a few paving slabs piled on top to provide the platform and also inertia to the system.