I've been keeping an eye on these things for a couple of days, finally took time to shoot one. I think it's just about ready to hatch -- if I play my stack like a movie, there seems to be something big and fuzzy moving around inside. 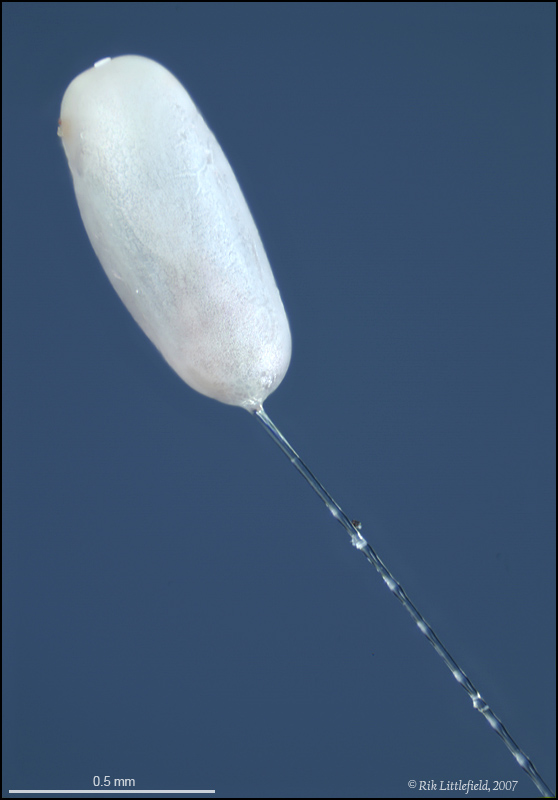 The stalk of these things is silk, or at least so says "Life in the Undergrowth".

What I did not appreciate is that the stalk is also covered in some nonvolatile liquid. That's what makes the beaded appearance that you can see here.

I suppose the liquid is there to further discourage things that might like to eat the egg.

My first thought was "glue", like on a spider's web. But actually its consistency is more like thin oil -- fairly low viscosity and it didn't pull out into streamers at all. I have no idea what it is, chemically.

Technical: Canon 300D, 10X NA 0.25 microscope objective on 160mm extension, 65 frames stacked at 0.00025". Dual fiber halogen illuminator with ping-pong ball diffusers, one from above and in front, the other below and behind (backlit). Custom white balanced on the illumination. PTLens'd to remove CA.

I had some trouble getting this stack to process well, and there's still a bit of "stacking mush". There is so little contrast in the texture of the egg that I had to pre-sharpen before running Helicon Focus, even with R=20. "Presharpen" means that I used Photoshop batch automation to process each of the source images: resize to 70%, then USM by 60% at 1.5 pixels.

Really racking up the points this week Rik. Another excellent photo.
Take Nothing but Pictures--Leave Nothing but Footprints.
Doug Breda
Top

Great! Rik, you have done a superb job again. Thanks for sharing and for the technical info.

For a comparison I would be interested in seeing the pic before CA removal, IYDM.

P.S. "Life in the Undergrowth"? Do you mean the excellent BBC documentary series presented by Sir David

I like the simplicity of it and the contrast between the subject and the background. Nicely done.
Sue Alden
Top


Planapo wrote:For a comparison I would be interested in seeing the pic before CA removal, IYDM.

To make the comparison easy... 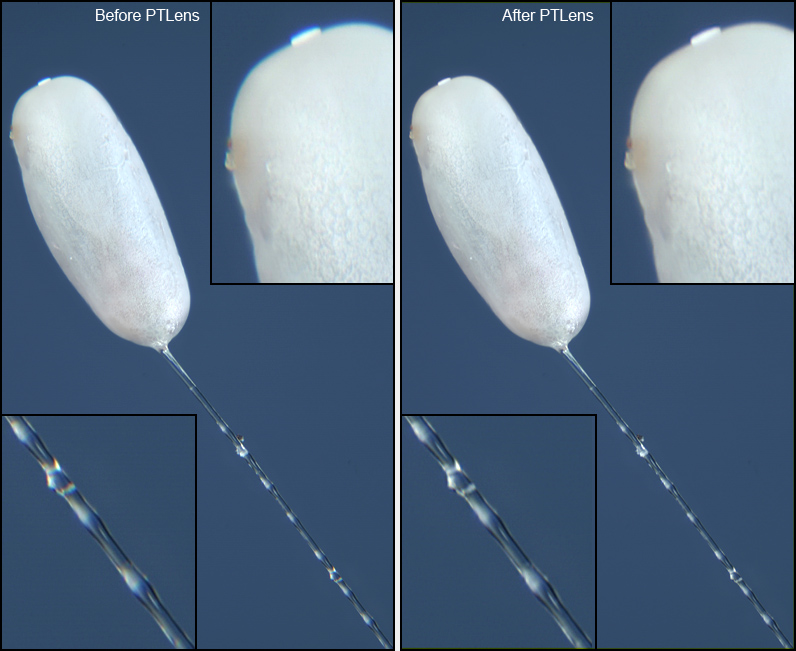 "Life in the Undergrowth"? Do you mean the excellent BBC documentary series presented by Sir David

I do indeed. A wonderful collection of macro videography. The DVD's are well worth their price!

I don't recall exactly where lacewing egg-laying is described, but there's a few seconds of it shown in the header of The Silk-Spinners. (It's probably in all the other headers as well -- I think they're all the same.) Mommy Lacewing touches the end of her abdomen to the leaf, withdraws a strand of silk, squirts out an egg at the very end of it, then moves on to do the same thing again.

I have not looked at the egg-laying anatomy. Google search on "lacewing spinnerets" produces nothing useful.

Of the dozen eggs that I examined, there was one (and only one) that had a very thin strand of something extending past the egg. I thought at first it was a bit of debris, but when I tried to remove it with forceps, it gradually separated from the rest of the stalk like pulling a fiber from a plant stem. I'm suspicious now that perhaps the silk flow did not quite cut off when that egg squirted out, and the extra strand was just a thinner extension of the stalk.

PS. I did a bit of searching on "lacewing silk egg". Among other references, this interesting little snippet popped up (http://www.cals.ncsu.edu/course/ent425/ ... rop~1.html, emphasis added)

When they pupate, larvae of lacewings and antlions dig a small cavity in the soil and spin a loose silken cocoon around themselves. Many holometabolous insects exhibit similar behavior, but neuropterans are unusual because their silk is produced by Malpighian tubules (excretory organs) and spun from the anus. In contrast, most other endopterygote insects produce silk in modified salivary or labial glands and spin it with their mouthparts. Only one other order, the Coleoptera, makes silk in the same manner as Neuroptera.

Could be, then, that it would not be at all easy to examine the silk-producing organs!

Really lost in this, I agree with Sue on the photographic stuff though.

I am behind on a lot of stuff from mess'n with my desktop. NAVIS is give'n me fits and so is my email and a host of other things. May dump the drive and start over or maybe just can the #@!#@ thing and stay with this laptop.

Laptops don't have all that wiring and a big @!#@!*&* monitor taking up space on the desk. Mumble, mumble....mumble again.
Top

Ken Ramos wrote: NAVIS is give'n me fits and so is my email and a host of other things. May dump the drive and start over or maybe just can the #@!#@ thing and stay with this laptop.

Ken, I hope you've got your images backed up somewhere safe. I remember you having a problem with that awhile back. If you don't have a separate backup of your images, I'd make one NOW! Before doing anything else if your computer is being screwy.

Learned my lesson there Mike.

Everything is backed up, including the toilet!

Naw, the toliet is fine, I have an outhouse, no not really. Just kidding, about the outhouse too and the toliet being backed up that is.

All my photos are on CD. I have been pondering an external HD though, as a better means of storage.