Usually I want a lot of diffusion, so one of my standard strategies is to wrap a diffuser all around my subject and shine several Ikea Jansjö lights on it from several inches away.

But recently I had a special case where I wanted a baseline level of heavily diffused light, combined with another component that was a lot more directional.

No problem, just place a small source very close to the diffuser that's wrapped around the subject, so that only a small part of the diffuser would light up super bright.

The usual way to do that is with a fiber optic bundle.

But this time I decided to try something a little different. It worked out OK, so I thought I'd post it out just in case it might be helpful to somebody.

Here's an illustration of the result. What we're seeing here is an index card resting by gravity on the face of two Ikea Jansjö lamps. The lamp on the right is normal; the one on the left has been modified so as allow much closer access to the LED element. In addition a short piece of opaque tubing has been placed around the LED to restrict its output to be the diameter of the LED element. The result is a very small spot that contains a substantial fraction of the entire LED output. 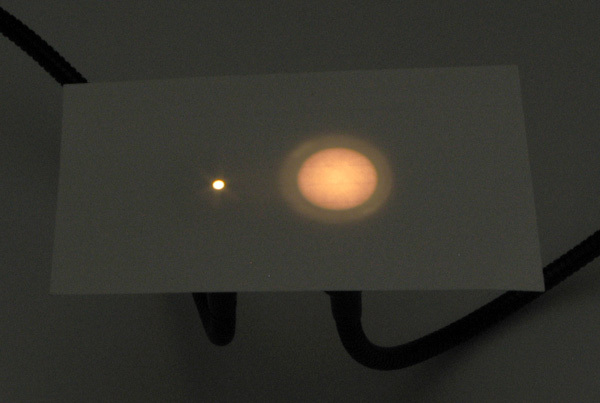 Here are the lamps without the index card. Very briefly, the one on the left has had its lens, reflector, and the front roughly 10 mm of the housing / heat sink removed. 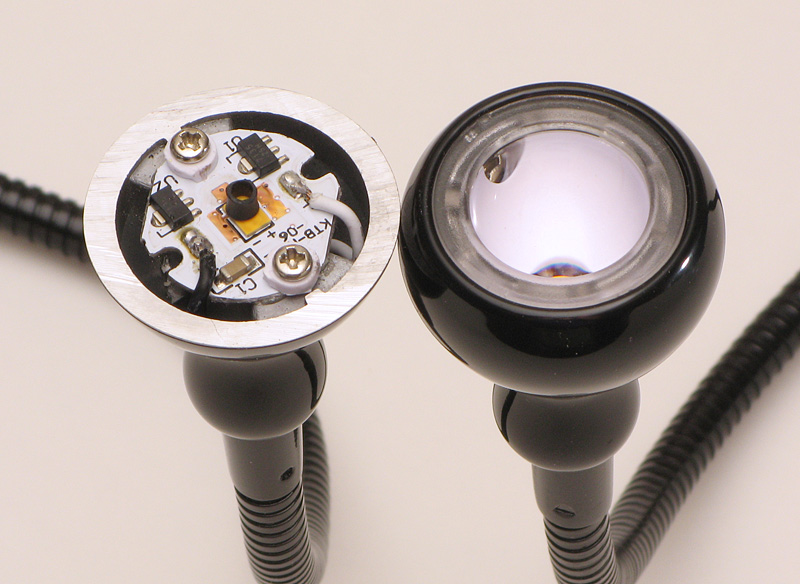 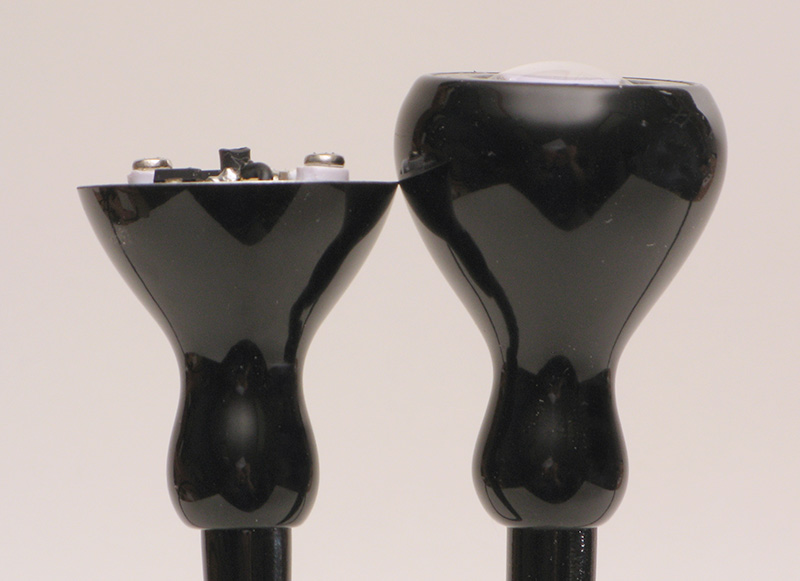 Here's a comparison of the modified head versus a stock head that has only had its lens removed. 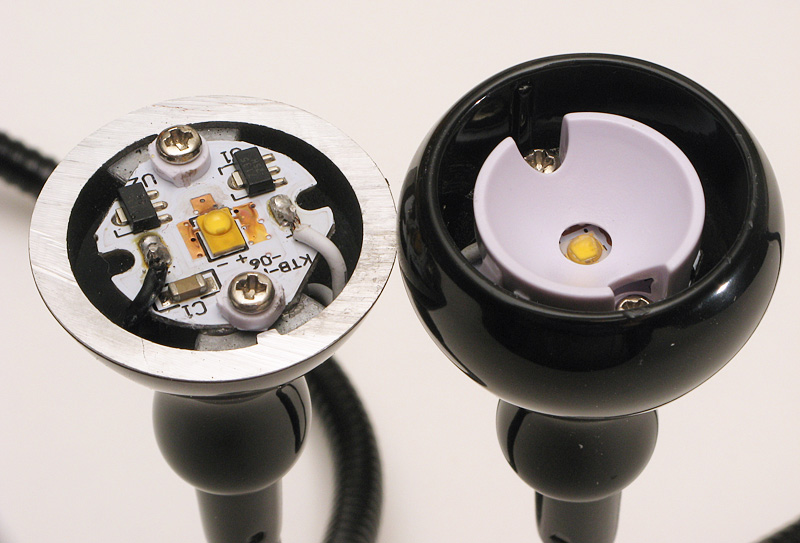 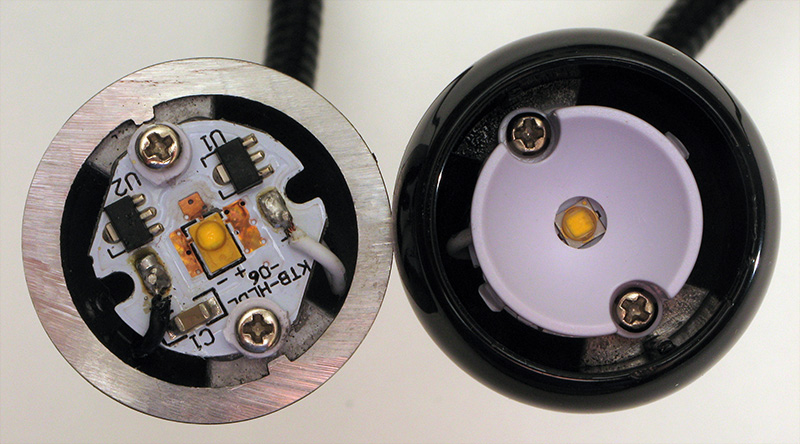 The modification process was to Here are a few more snapshots of the mod in progress. 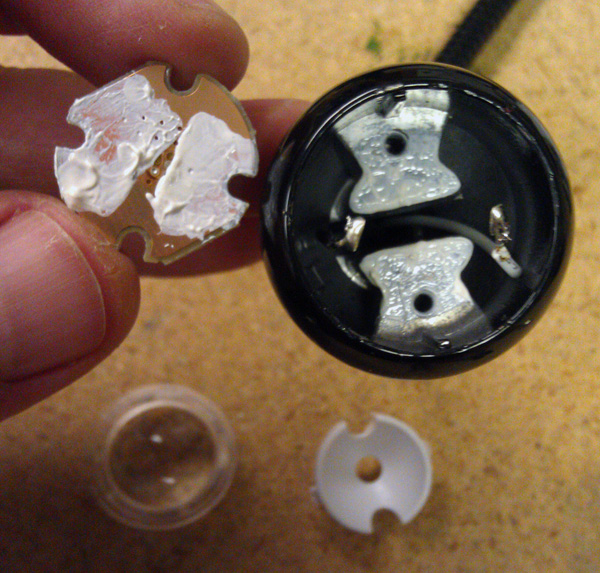 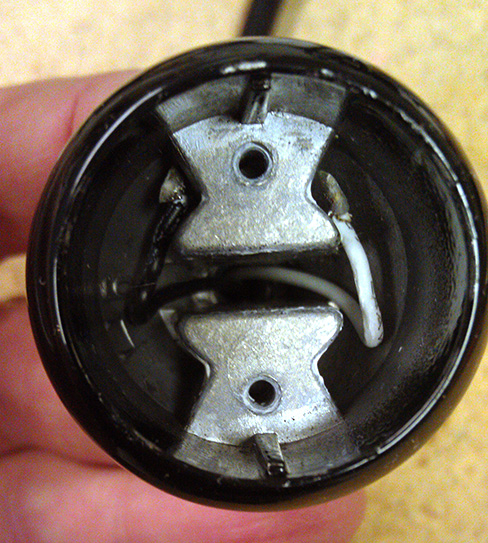 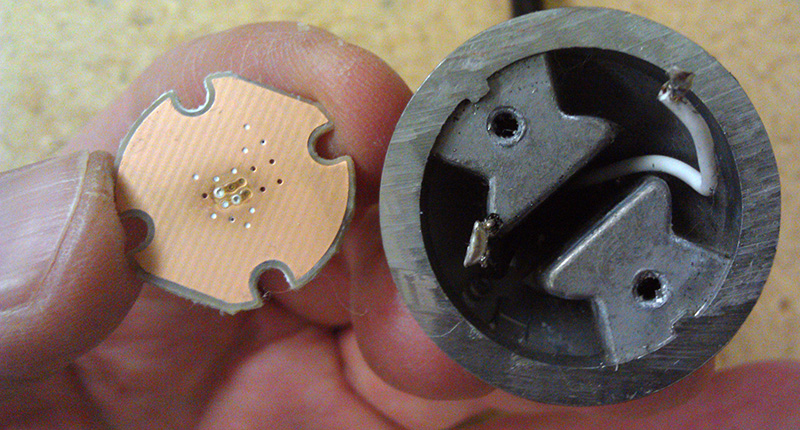 Clearly it would be more light-efficient to use something white instead of that black tubing, but hey, it was handy, it worked OK, and it can be replaced later if that's important.

A couple of things about heat management:

1. The modified head definitely runs warmer than the unmodified one, because it provides less surface area to dump heat into the surrounding air. But it still seems to be a safe temperature. After running all night, the normal head is clearly warm to the touch and the modified one is still short of painfully hot. I'd guess 20 degrees Fahrenheit increase, possibly 30.

2. That part about pre-shrinking the tubing is important. The LED element gets plenty hot enough to shrink the tubing by itself, if you don't. You can trust me on this.

Nice write up. What was the application where you needed the pin point light source?
I'm in Canada! Isn't that weird?
Top

Good post Rik.
Timely for me, as I am working up some new LED lights to replace the Janslo (for higher light output/higher CRI).

My thoughts were to a short piece of aluminum tubing (such as http://www.ksmetals.com/23.html... I realize your the heat-shrink tubing was an "on-hand" decision). You could even drill a hole into the plastic lens and use it as a support for the aluminum tube. Then, if a greater stand-off is desirable, you could insert an acrylic rod into the aluminum tube. The length of the rod could vary quite a bit, allowing the light "body" to be positioned farther away from the subject to minimize clutter around the subject. With nicely polished ends (or maybe a simple lens at the output end) this might work out OK. Thoughts?
http://www.krebsmicro.com
Top

abpho wrote:Nice write up. What was the application where you needed the pin point light source?

I was playing around with alternate ways to illuminate that chunk of copper debris that flushed out of a new faucet. To say that I "needed" such a small light source would be way too strong, and truthfully, I don't have any great results to show from that experiment. But modding one of the Ikea lamps was an idea I've had in mind for a long time and this was a good excuse to give it a try.

Those sound like great ideas. The aluminum tubing seems pretty foolproof, at least in short lengths. In longer lengths, I can imagine an issue with light loss due to the small diameter causing many slightly lossy reflections before the light gets out. I like your idea of using the plastic lens as support -- maybe just drill a hole in the center of the lens and slip in a piece of aluminum tubing, no other mods required. That's a cool idea, in both the esthetic and thermal senses of the word. As for acrylic rod, I have no experience using that stuff as a light guide, so I have no idea what interesting wrinkles might come up.

Pimp my Jansjö with 10x Eyepatch

This eyepatch has the same diameter as the lightbulb of the Jansjö.
Some small tips of silikone and the Jansjö and the eyepatch are clued together.

Using a illuminance meter I found the next details when comparing two Jansjös, with / without eyepatch

I did something similar. I converted a Jansjö to UV-LED for activation ov UV dye. But the intensity was too low.

In an electronic shop I found a spot- reflector for CREE LED which could be mounted in the Jansjö instead of the original wide reflector.

Well, I had in mind a spot about 20 times smaller than that.

But the basic idea of adding some optics to refocus the beam could be viable. As shown HERE, most of the light coming out the front of a Jansjö comes direct from the LED, not bounced off that matte white "reflector". So it seems that one could black out the reflector and replace or augment the optics so as to project an image of the LED die wherever it was desired, for example focused onto the surface of a diffuser. That would be analogous to those focusing lenses found on the ends of some fiber optic illuminators.

lothman wrote:In an electronic shop I found a spot- reflector for CREE LED which could be mounted in the Jansjö instead of the original wide reflector.

Interesting. I am curious to know more about the configuration of that reflector. Also I don't follow your thinking about peeling off the spherical lens. To me it seems that the purpose of that lens is to partially collimate light coming from the LED, so that it concentrates into a cone instead of spreading out into a more uniform hemisphere. Can you explain more?

rjlittlefield wrote:Interesting. I am curious to know more about the configuration of that reflector. Also I don't follow your thinking about peeling off the spherical lens. To me it seems that the purpose of that lens is to partially collimate light coming from the LED, so that it concentrates into a cone instead of spreading out into a more uniform hemisphere. Can you explain more?

The reflector looked similar to this There are 5° or 7° versions available. If you google for led+reflector+CREE+5° or 7° you can find further hits.

The thing with the lens came in my mind from a led torch I have. This has a led without lens, when I unscrew the reflector the light is much more orientated than with other leds with a lens. This special led torch has an lens on the front cap which can be axial shifted. In a certain position it projets a sharp Image of the led like a slide projector. In my opinion the spherical lenses are there spread the light, see here a Zeiss paper on LED
Top

Rik - sounds like you need a "white"/"supercontinuum" laser?
Not quite readily available yet though, I think.
Top

Lenses (or possibly reflectors) would be a good "off-the shelf" way to go. Leedil and Carclo have quite an assortment that can get you down to perhaps the 5-10 degree range (varies quite a bit with different LEDs).
http://www.carclo-optics.com/optic-1019 ... amily=20mm
But this is not as "tight" as Rik achieved.

Off and on I've looked for tapered light guides that would provide TIR to put a small light source close to a subject.

This individual had a similar idea, so you can get an idea what I mean:

Since this is not a project that is very high on the "to-do" list, I looked around to see if I cold get an expensive tapered acrylic light guide. No luck really.

But there is one rather "bizarre" possibility. There are clear acrylic "tapered ear gauges" available. These are used to stretch out your ear lobes.

While (trust me!) I have no interest in that usage, I could see putting these on an LED (or Ikea head). If you cut and polished the narrow end you might get a good small source that could be easily positioned. It might help to drill a recess into the wide end that fits over the built-in LED lens. If you polished that recess you might capture a good percentage of the LED light output.

(If the lamps I am putting together now work out, I will have a few "surplus" Ikea lights around... maybe time to play around with this idea again)
http://www.krebsmicro.com
Top

lothman wrote:In my opinion the spherical lenses are there spread the light, see here a Zeiss paper on LED

Thanks for the link. I think you're right. My earlier thoughts were based on some add-on lenses that I had not remembered correctly either.

do you have an acryl rod available which you could glue to the lens or with another Led direct on the LED?
Top

I think you may have way too much heat-sink paste on the diode and this could possibly be a contributing factor to the heat problem. I know that most of the paste would squeeze out as you tighten the retaining screws, but I suspect that a relatively thick film would still remain between the diode and the heat-sink.
Top

lothman wrote:do you have an acryl rod available which you could glue to the lens or with another Led direct on the LED?

No such material on hand. I'll look into getting some, but for me this project is very low priority at this point.


GraemeMellis wrote:...may have way too much heat-sink paste on the diode.

The white paste you're seeing is what the manufacturer used. After I cleaned that off, I replaced it with fresh Arctic Silver 5.


... and this could possibly be a contributing factor to the heat problem

I've probably gotten something backwards again, but if there a heat transfer problem, wouldn't the LED be too hot, and the heat sink not hot enough?