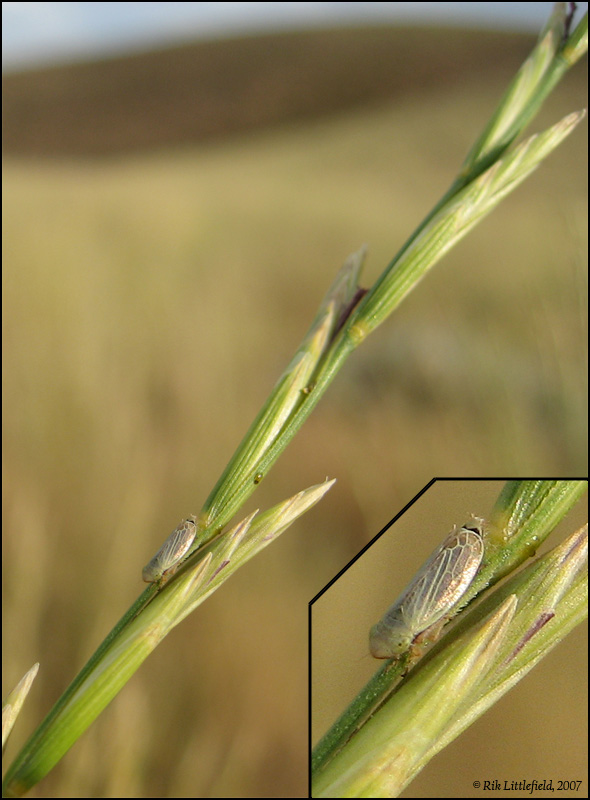 This is a case where I really missed having manual controls on this little point-and-shoot camera. Another couple of f-stops smaller would have done a lot better job of capturing the background, I think. Of course, if I had been thinking far enough ahead, I could have used the same camera to shoot an in-focus background, then blurred & blended in Photoshop. Oh well...next time.

This is mature native bunchgrass -- I don't know what species for either the grass or the hopper.

Good show for such a non-specialized camera! Did this have a closeup diopter on the lens, or is this a strictly stock camera you used?
Mike Broderick
Oklahoma City, OK, USA

No adapters at all, strictly stock. Turn it on, set macro, and have at it.

It can be a bit tricky to get the autofocus to do exactly what I want, but its preview is pretty good and hey, this is digital -- half-press 30 times to see the previews, full-press 10 times to take shots, discard 9 of those.

I think point and shoots get a bad review sometimes from those who want to shoot other than family snapshots or outings. Might be because they do or have not utilized the camera to its full extent and not have become familar with it. My little Sony DSC-W1 does not take grand images but they are mostly acceptable from general shooting to macro if used in the manual mode of operation. The Fuji FinePix S7000, that I donated to a young up and coming photographer, took excellent images too. Though an advanced digital camera it was still pretty much point and shoot also. On the other hand the Olympus models that Nikola uses are really something to be considered as being equal to a bulky DSLR, not that I would trade off my 20D or 30D for one.

Nice shot there Rik. Looks as though there is another smaller bug on the grass next to the hopper.

Very nice detail on the wings of that small hopper
Take Nothing but Pictures--Leave Nothing but Footprints.
Doug Breda
Top

Mike B in OKlahoma wrote:Good show for such a non-specialized camera!

You know, I'd like to argue that it's the DSLR that's non-specialized, while the point-and-shoot is highly specialized.

The question is, "Specialized for what?"

The point-and-shoot is specialized to be easy to carry and easy to use. That introduces some pretty severe limitations. The small sensor implies a short focal length lens, which implies a small diameter aperture. That shrinks the "sweet spot" between aberration- and diffraction-limited apertures to be several times smaller than the DSLR's, which limits the artistic use of wide apertures to isolate ordinary subjects. Easy to carry and easy to use also means no interchangeable lenses, and for that matter, no 10-to-1 superzooms because the lens would be too big.

It's a quirk of optics that the small lens implied by easy-to-carry, easy-to-use also happens to be good for short-focus, wide-angle macro. It's another quirk that auto-focus works especially well in this case, apparently because the ratio of working distance to DOF is so much smaller than for the DSLR. And the quirks keep adding up -- that same small lens just happens to behave a lot like a human eyeball, which means that the point-and-shoot plays nicely with the existing eyepieces of microscopes and telescopes. Sometimes you get lucky! But don't try shooting dragonflies with this thing -- it doesn't do long-focus macro.

The DSLR, on the other hand, has none of these limitations. It's a very general tool. I love my DSLR. It can do anything -- at least, given an appropriate lens for the job, and no constraints on size, weight, maneuverability, and so on.

A different point of view, perhaps?

Well, neither would I, if I had to make that choice. On the other hand, given that the point-and-shoot now sells for about the cost of one good lens for the DSLR, that's not a choice I have to make. And on the third hand, if I were recommending what to buy first, to somebody who didn't already have a camera, well, it would not be the DSLR.

It's odd how these things change. 20 years ago, even 10 years ago, I considered the SLR -- then in film -- to be essentially a no-brainer because it was far superior to other types of film cameras. 5 years ago, the situation got murky because digital was clearly on the horizon but not yet very good except for expensive pro units. 3 years ago, prosumer DSLRs became clearly a good idea -- much to my surprise at the time -- though the compact digitals still ticked me off because of their high noise and low latitude. Today, the compact digitals are pretty good too (within their range of specialization

What happens next? I dunno. I'm pretty comfortable predicting better ratios for price/performance, functionality/size, and so on. But whether that means cheap and small, or big, expensive, and all-powerful, I don't have a clue. Maybe all of the above. I notice that the latest issue of Consumer Reports reviews cameras from a $100 FinePix up through a $1300 Canon 30D. These are interesting times, for sure!

Ken Ramos wrote:Looks as though there is another smaller bug on the grass next to the hopper.

It does. But on close examination of the original image, those extra spots look more like fluid drops. Maybe the plant is leaking after being punctured by the hopper and its friends?