The Corsair H60 liquid CPU cooler in my computer stopped working a few days ago, after 13 months of continuous use.

I replaced it, and then, suffering from intense curiosity, started disassembling the old one to see if I could figure out what had gone wrong.

The first thing I did was to pour out the fluid, which looked very much like green coolant from a car radiator. No surprise there. What did surprise me was that the fluid was not clear, but instead had a lot of small flakes of something suspended in it.

What the something is, I don't really know, but I think it has the general appearance of some sort of biofilm that has come loose and then gotten hacked to pieces in the pump.

If anybody else has more information or ideas, I would be very interested to hear! 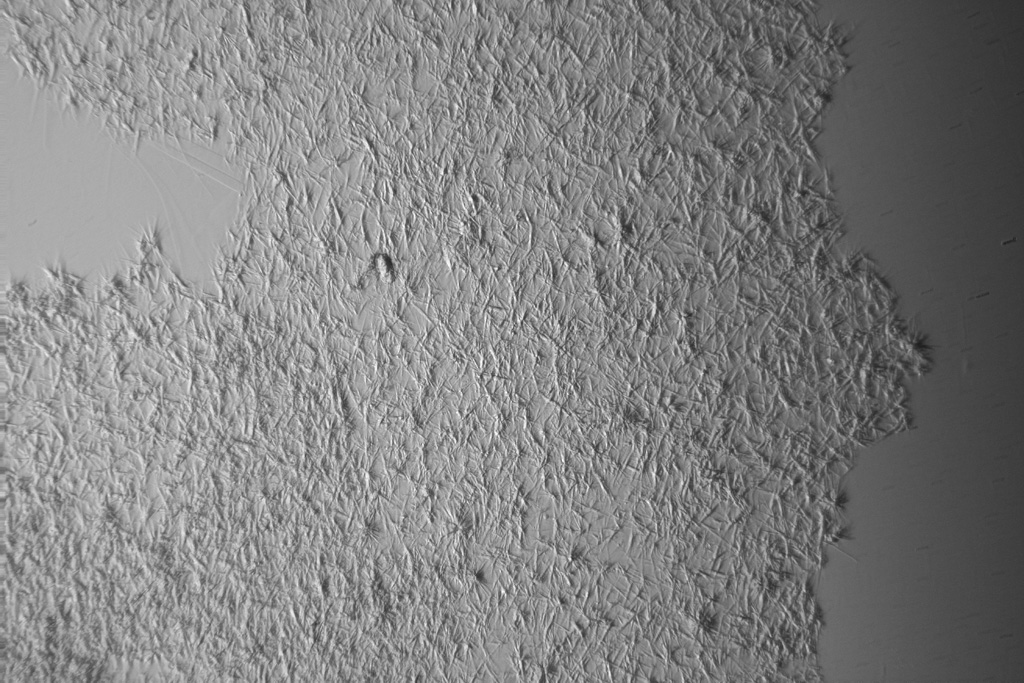 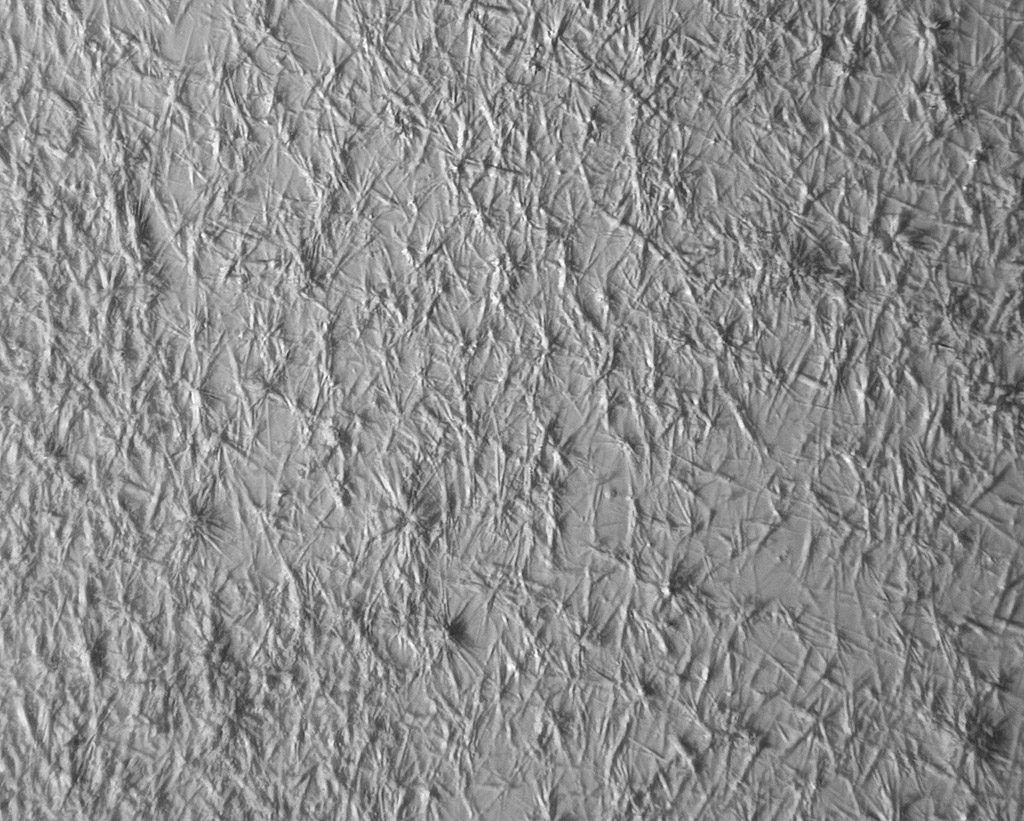 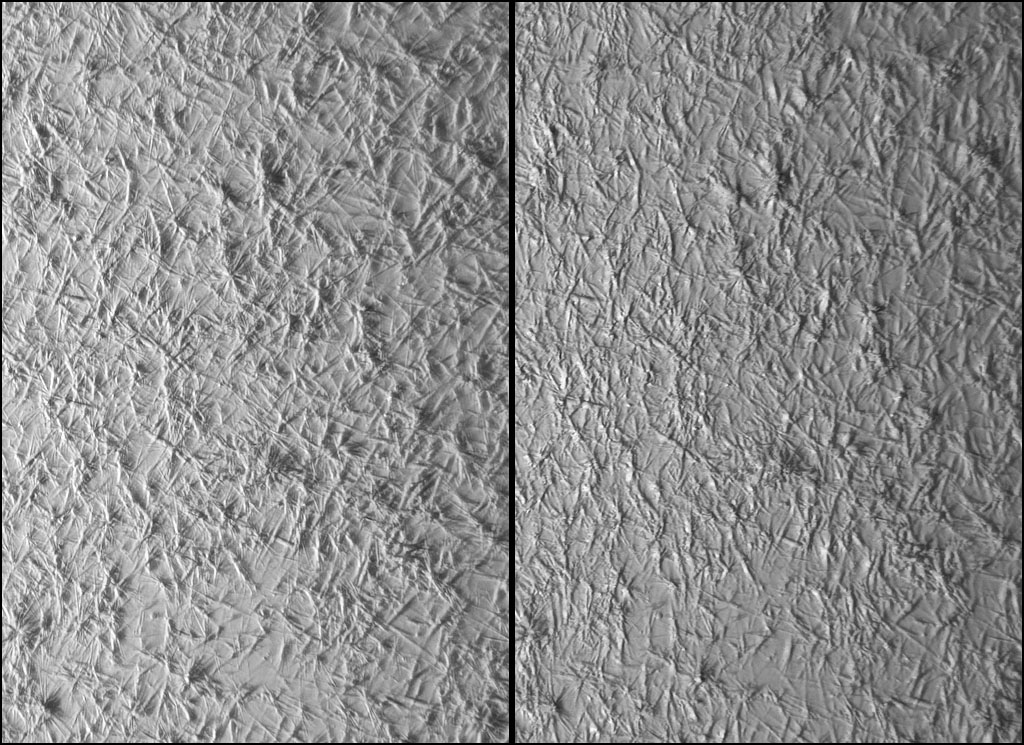 It does not look familiar. But couldn't it be crystals? Have you tried it with crossed polar filters?

I sent this thread to a friend who is a chemistry professor. Here are her quick thoughts:Cheers,

Looks very much like mineral crystals. I have been doing some experimenting with leaching and acids, trying to grow "photogenic" crystals. Typical result of some random acid drying up on a plate would look just like your photo. Colourless elongated needle-like crystals zigzaging the plate could be the result, for example, of some saturated HCl based solution drying a bit, but this is a random guess as there must be a legion of solutions behaving in the same way.

The acid leaches stuff and when evaporating the crystals of the leached stuff can appear crystallized, but acids and leaching are not necessary as it could be just some saturated solution drying up and forcing crystallization. Just now I am looking at a plate where I poured same saturated water/oxalic acid a couple of days ago and left it to dry and now it looks very much like your photo.

or if you are really interested you could buy a qualitative sem-eds analysis (10 dollars) or XRD analysis (40 dollars).

p.s. I am not a chemist, just playing around with stuff

Thank you all for the suggestions.

I have run a few tests this morning and here is what I find:

1. No effect by dilution with copious quantities of tap water (10:1).

3. Inconsistent and generally small effect by Clorox (strong basic solution with sodium hypochlorite and unknown "biodegradable surfactants and enzymes"). One of three tests cleared the suspension well; two did little or nothing; I don't know what the difference was.

I guess this means that crystals are looking like the answer?

I've seen a lot of biological and chemical "gunk" under the scope (well, scopes in 4+ decades of doing this)... I'll reach out to the the CPU thermo-mechanical guys and see if anyone has any ideas, but the corrosion inhibitor crystallization idea is the uppermost in my mind. Those pictures don't look like anything biological. I am assuming that you have an approximately 300 micron total FOV on your 40X pictures which makes those structures just a bit too large to be most bacteria (and wrong shape etc as well). Add to that the fact that they dissolve readily in a reasonably strong acid and I am pretty convinced that ChrisS has the correct explanation. Especially considering that most of the prosumer CPU coolers are loaded with propylene glycol or mixtures containing PG.
I will call around and see what I can dig up. Meanwhile, if on the off chance that these were bacterial or fungal (very unlikely) some DAPI, SYTOX, TOTO or Acridine Orange would light them up pretty well if they contained DNA (and you know someone who has a fluorescence scope, of course knowing Rik, you will gin one up in a few minutes with a UV LED...). One has to be wary of false positives of course, but if they don't have any nucleic acids in them they are not bacteria etc...

discomorphella wrote:I am assuming that you have an approximately 300 micron total FOV on your 40X pictures

This was direct projection onto an APS-C sensor, which would make it about 22mm/40 = 550 microns.


of course knowing Rik, you will gin one up in a few minutes with a UV LED...)

<grin> If I had one, I'd probably give it a shot. But I have specifically avoided getting any such thing because I tend to be a little undisciplined about using tools and materials, and I would not care to harm my vision.

Ah, I had assumed a bit of intermediate magnification, didn't read carefully enough. Even so the objects don't look like bacteria or fungi. They are not eukaryotic either.
As for your homebrew fluorescence scope, you can do pretty good epifluorescence using a regular medium power blue (say 450 nm center wavelength) LED. No more eye risk than any other bright light source (SYTOX Green, TOTO-1, Acridine Orange will all work with that...). All you'd have to do is illuminate the slide from the side and have a blue blocking filter between your APS-C and the sample. Looks like its time to get a new cooler.

A couple of more images and we can put this stuff to bed, I think.

I took a sample of the stuff, washed it a few times with plain water, then dried it on a slide.

Here's what it looks like at 50X on a full-frame camera (720 microns frame width). The black holes on left side are where I poked at it with a tiny pin just to see what would happen. 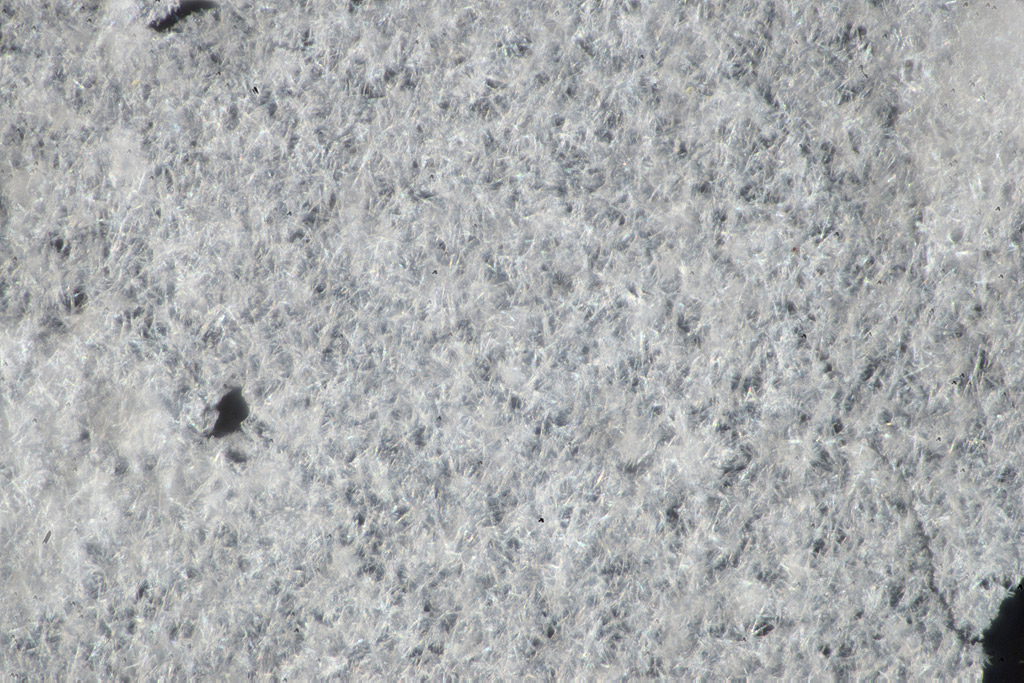 And here's a closer crop, 50% of actual pixels, so just about 20% higher magnification than shown in the earlier crops. 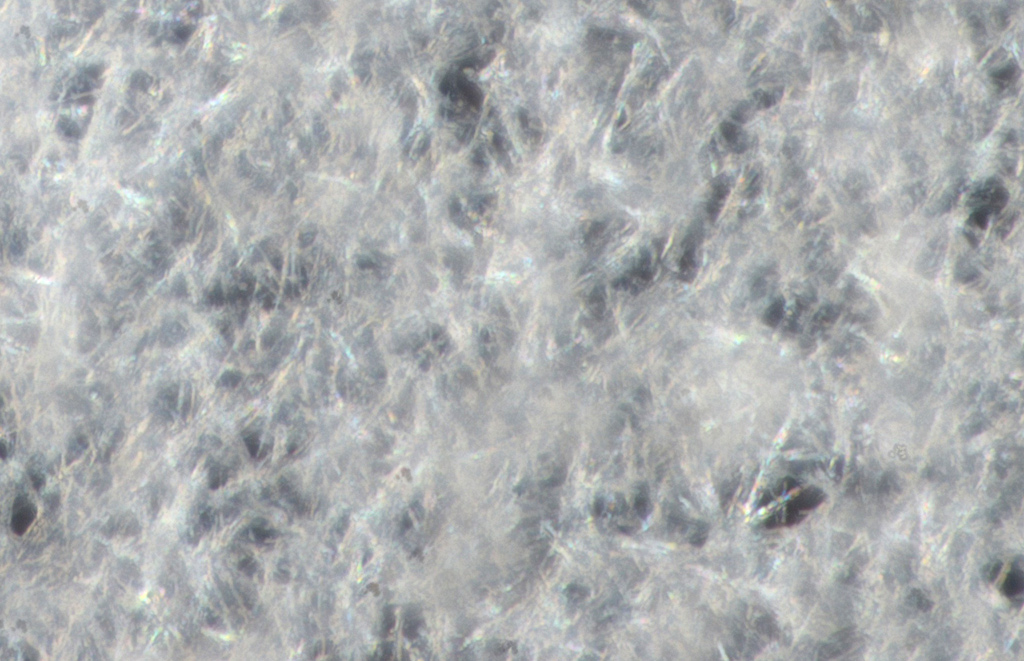 Finally, here's what the stuff looks like at macro scale.

First, after being allowed to settle for a couple of days into that lower right corner of the container. In this repose it looks a lot like gelatinous goo, which is what I thought when I saw it clogging the vanes of the heat exchanger.

By the way, this view is looking slightly downward. What looks like it might be a thick layer of yellowish stuff is actually a thin layer of whitish stuff all across the bottom of the container, illuminated and seen through a liquid that is yellowish in transmission. 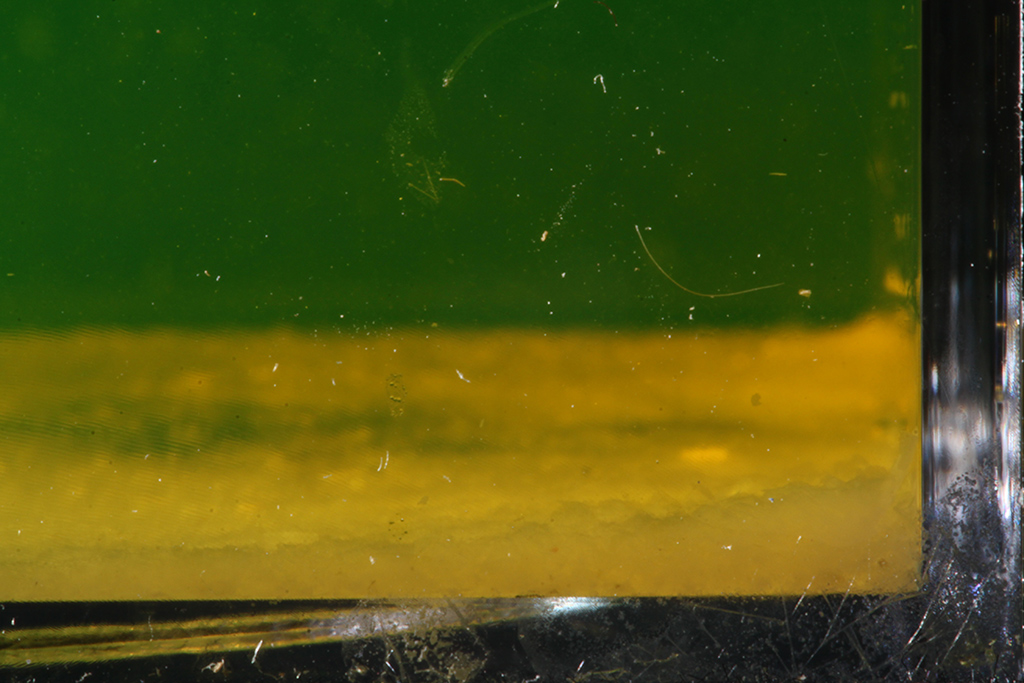 Agitating the solution gives quite a different impression! (Single image, exposed with flash from the side through the fluid, frame width 23 mm.) 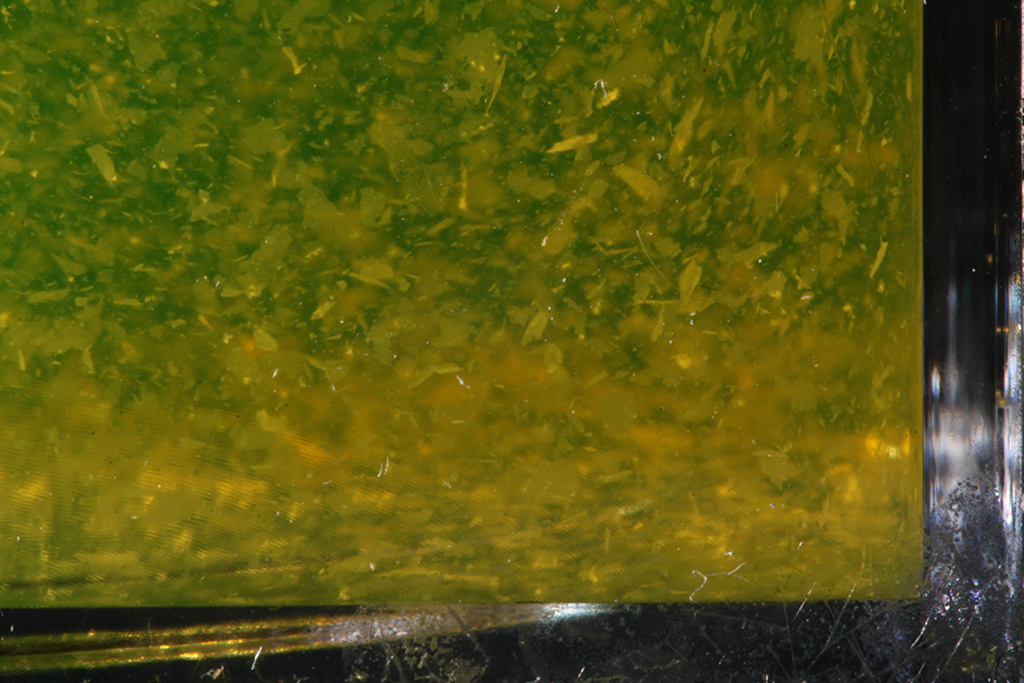 I've edited the title of the original post to reflect the corrected ID.