This is pretty much a follow-up to LordV's thread, "Playing with a Meike MK-C-UP multifunctional extension tube".

Short story: I bought one; it works fine; here's an illustration of one application that's interesting to me.

First, here is the promised fly, as whole frame reduced to 1024 wide. 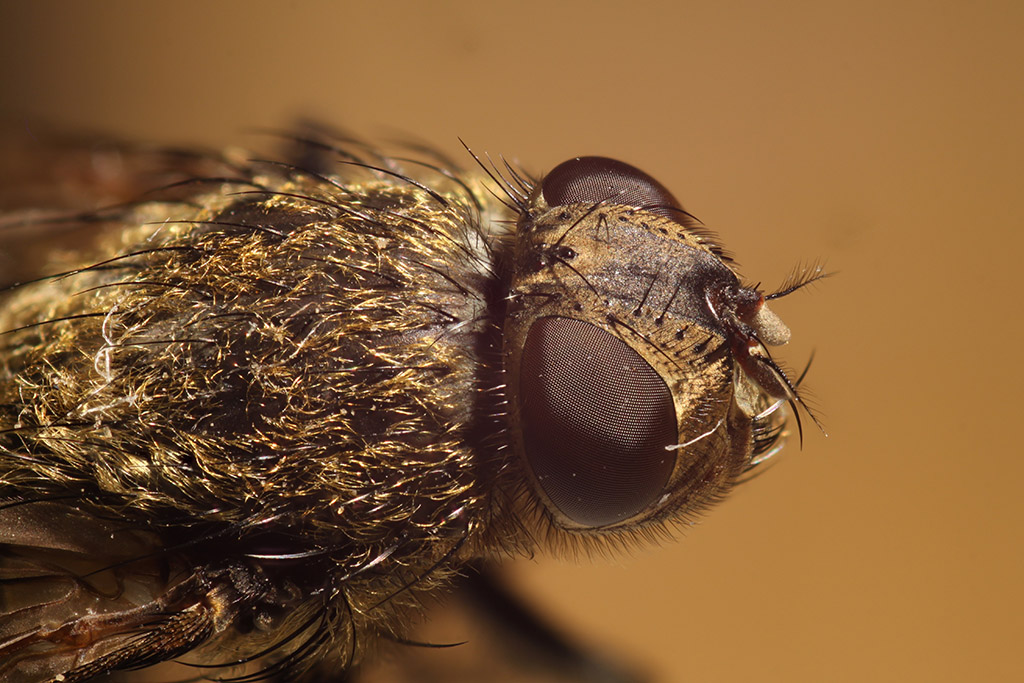 Then, a crop of original pixels reduced to 50%. 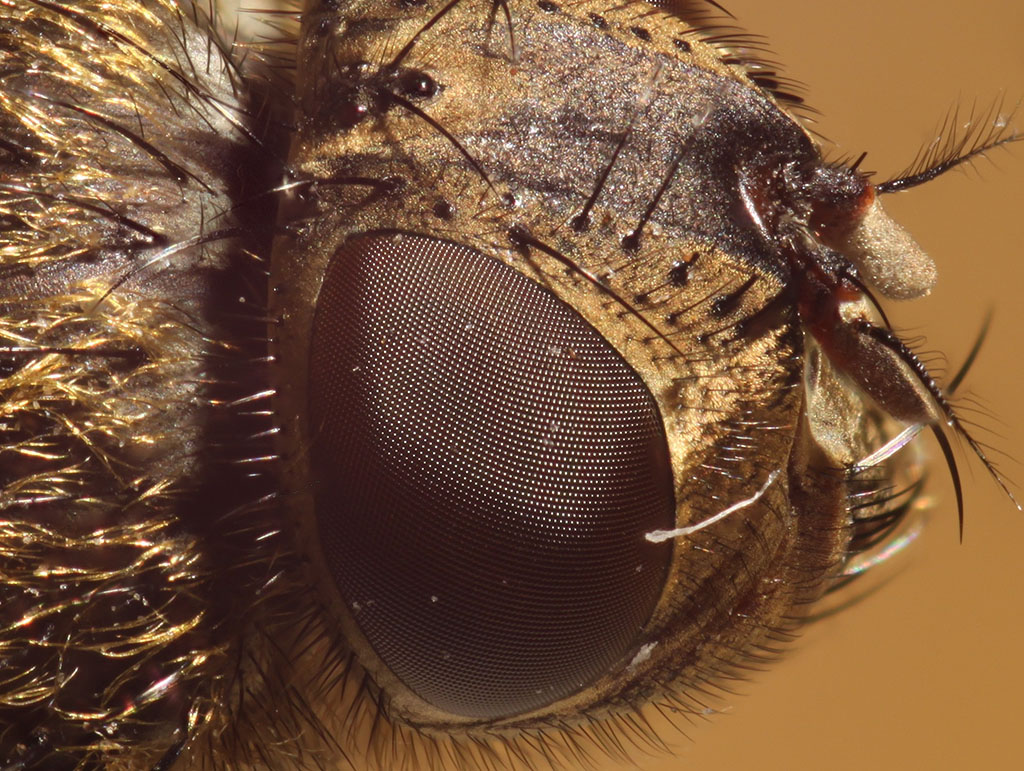 Finally, here is the setup. Yes it is kind of minimal, and that's the point. 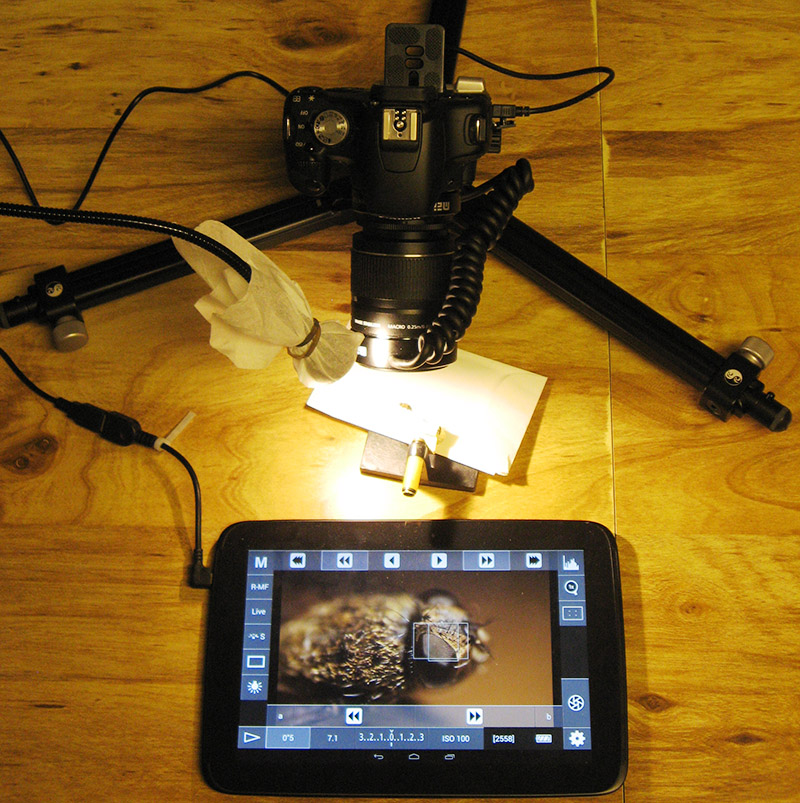 This is a combination of stuff that I haven't plugged together before:

Focus stacking was done by having the DSLR Controller app drive the focus motor of the reversed kit lens, 24 frames at 0.5 seconds and nominal f/7.1, spaced by one middle-size step. Zoom setting around 30 mm.

I don't know whether this will interest anybody else, but since I had to do something to make sure the adapter was OK, I thought I'd post it out. I also don't know exactly what the fly is. It was an oddly hairy beast that turned up between my window and the outside screen a couple of days ago.

Thanks for your test Rik

Thanks for the test. I have been planning to build a similar adapter myself, but at this price there is no point. From the pictures on Ebay/amazon it is difficult to see how the adapter rings attach to the unit. Is i by a bajonet or is it a threaded connection?
Top

http://cjai.biologicalsurvey.ca/jmw_19/jmw_19.html
NU.
student of entomology
Quote – Holmes on ‘Entomology’
” I suppose you are an entomologist ? “
” Not quite so ambitious as that, sir. I should like to put my eyes on the individual entitled to that name.
No man can be truly called an entomologist,
sir; the subject is too vast for any single human intelligence to grasp.”
Oliver Wendell Holmes, Sr
The Poet at the Breakfast Table.

pontop wrote:it is difficult to see how the adapter rings attach to the unit. Is i by a bajonet or is it a threaded connection?

They are threaded, measures as 60 mm outside diameter. I don't have any other 60 mm threads to check against. I don't see any provision for rotating the reversed lens to any particular orientation to make the cable lie better if desired.

I read in the introduction that the larvae live by eating other critters, likely earthworms. I had no idea.

By the way, this device is clearly the strangest case of cross-branding that I can remember from personal experience.

As I mentioned in the other thread,

Oddly (but pleasantly!), the new device is also being sold HERE by Amazon.com under the "Neewer" brand, for around $50 from multiple vendors. The pictures clearly show Meike MK-C-UP. It would look like an advertising error, except that multiple reviewers say they actually received Meike, not anything labeled Neewer.

Here's the box that the product was delivered in: 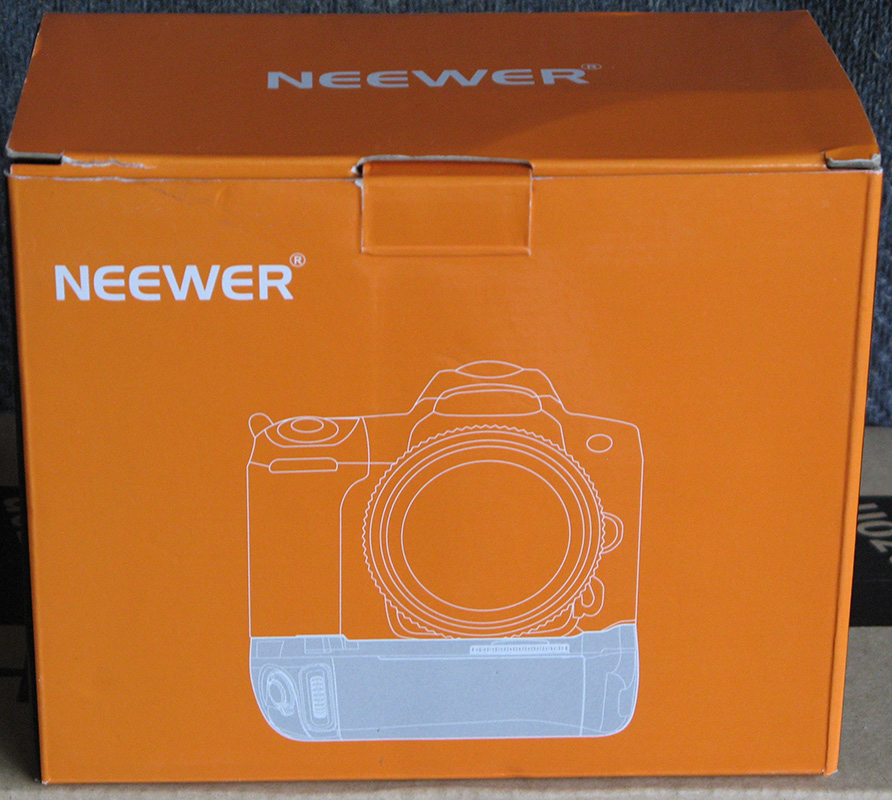 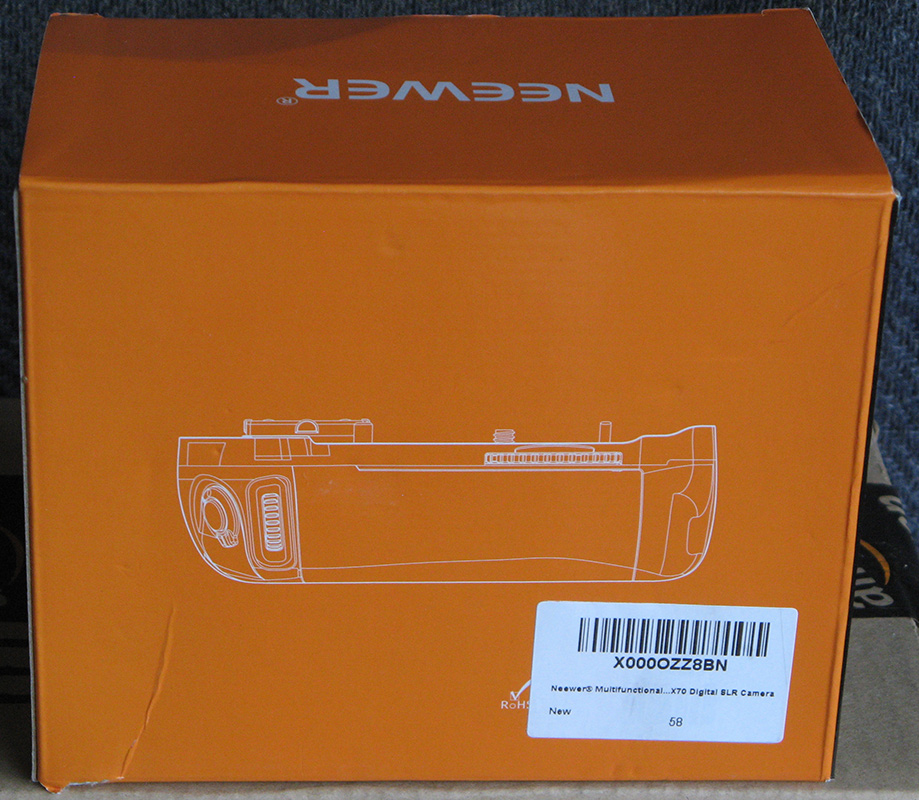 Notice that the box says "NEEWER", and the picture on the box is a battery grip, not the reverse adapter. The white sticky label on the back of the box references the reverse adapter using the same text as the Amazon ad ("Neewer® Multifunctional...X70 Digital SLR Camera"), but on the cardboard beneath that label I found the remains of an earlier sticky white label that partially delaminated when it was removed.

Meanwhile, the only enclosed paperwork was a small brochure mentioning only Meike and describing a larger collection of products in what may be the worst translation I've seen in print since I was a kid. (I really have no idea what "Growth of micro-focal length camera function" might mean.) 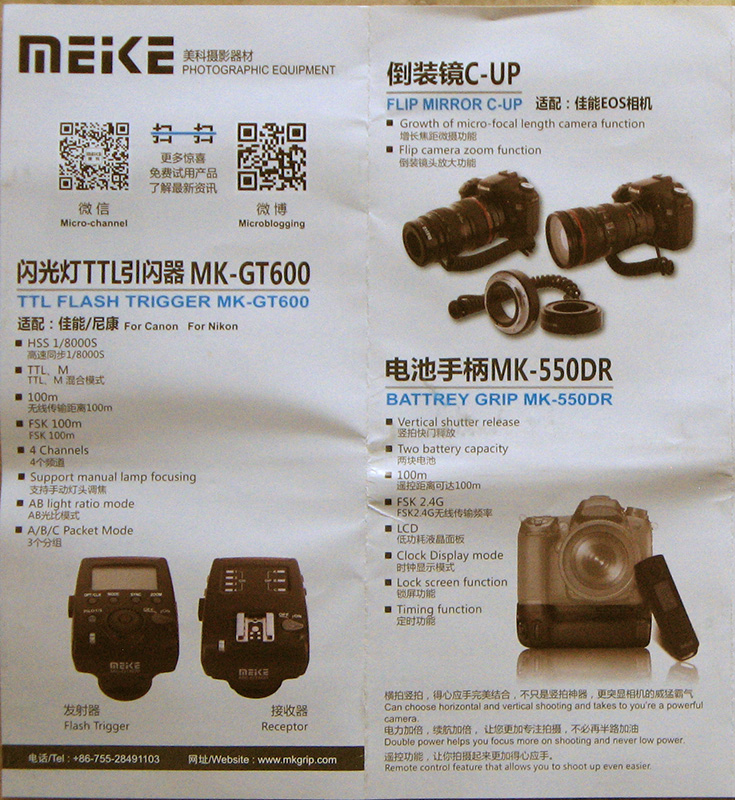 The website listed on the bottom of the brochure is www.mkgrip.com but the two QR codes go to weixin.qqq.com and weibo.cn .

Following the mkgrip.com link, at http://www.mkgrip.com/english.php?m=pro ... =200&id=80 I finally found a page that has really good pictures of the device along with some labels that pretty much make sense.

Then searching the neewer.com site, I found http://www.neewer.com/10079449 which seems to describe the same device, in much better English, but includes the completely incorrect comment that "Aperture control is not available if you use a lens which does not allow you to manually adjust the aperture (without an aperture ring)."

What a mess! (Nice device, though!)

Searching the web for "Neewer Meike", I find that other Meike products are involved in similar ads for Neewer, but I have not yet run across a convincing explanation of what's going on.

Does anybody here know?

Couplet 2: setae not as vagabunda

Couplet 4: facial carina not reduced, not griseotomentosa (I wasn't clear about the presutural anterior supr-alar seta)

So then, assuming that I correctly interpreted all these features that were previously unknown to me, I get the beast as Pollenia rudis. That also makes sense in terms of the range map, because the species recorded very close to me (SE Washington) are only pediculata, rudis, and angustigena, and I'm pretty confident about my ability to read the features that distinguish those species.

An interesting exercise, as always. There's something about the process of trying to make sense of unfamiliar anatomy that makes me appreciate just how intricate these critters really are!

Well done Rik! If you can get hold of a male you may be able to examine the genitalia (another good subject for imaging).
I find the entire Blow Fly family (Calliphoridae) nice subjects to photograph. Can usually get several species using simple bait traps.
Terry Whitworth has a key to the genera and species

http://www.birdblowfly.com/images/Publications/Keys.pdf
NU.
student of entomology
Quote – Holmes on ‘Entomology’
” I suppose you are an entomologist ? “
” Not quite so ambitious as that, sir. I should like to put my eyes on the individual entitled to that name.
No man can be truly called an entomologist,
sir; the subject is too vast for any single human intelligence to grasp.”
Oliver Wendell Holmes, Sr
The Poet at the Breakfast Table.