Amscope M150 focus block is NOT good for stacking

Amscope M150 focus block is NOT good for stacking

To be clear, the Amscope M150 we're talking about is this scope: 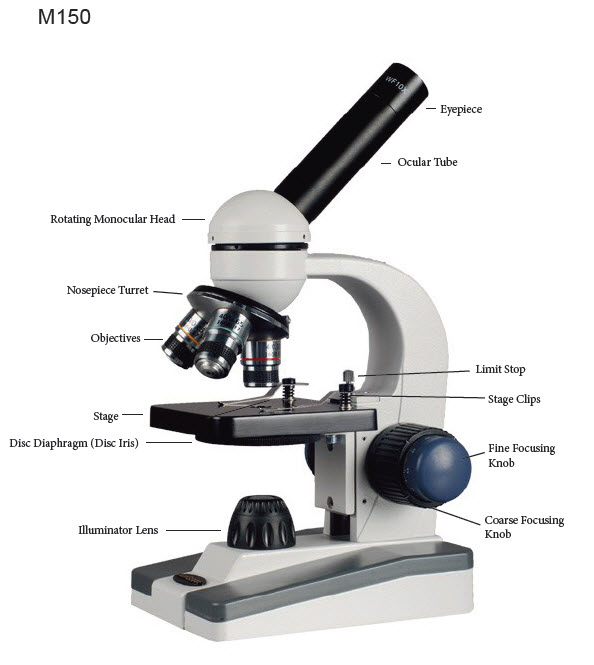 This is one of two microscopes that I recently obtained to evaluate for use in focus stacking. The other scope, a T490, seems quite good.

This one, the M150, is not. The fact that it has coaxial focus knobs with fine focus marked as 0-200 is quite encouraging. However, it's also misleading to a point just short of fraudulent. Where other scopes marked 0-200 are usually talking about microns, as in 0.200 mm per revolution, this scope is marked 0-200 in arbitrary units totaling 2.9 mm per revolution.

The scope is provided with 5X, 10X, and 40X objectives. Focusing the 5X and 10X objectives is OK, but focusing the 40X NA 0.65 requires constant and careful attention. Simply releasing the fine focus knob causes the image to drift visibly out of focus.

As advertised by Amazon,

This is a perfect microscope for students to learn science. It comes with full optical glass elements, metal framework, 360 degree rotatable monocular head, coarse & fine focusing, and LED illumination. It offers three magnification settings, 40X, 100X and 400X. It is an ideal microscope for home school or for students from elementary to high school.

The best thing I can say about this scope is that it's far better than the toy microscope I had when I was a kid. But it's getting sent back now.

Just recording a few more observations about this scope before I seal up the box.

1. The MS90 Mechanical Stage accessory for this scope operates smoothly. The short axis is rack-and-pinion with about 15 mm per rotation of the knob, while the long axis is worm gear with about 3 mm per rotation. It's interesting that the corresponding numbers for the T390 mechanical stage are 28 mm and 16 mm per turn. The knobs on the MS90 are smaller, but even so the MS90 actually provides much better control on the long axis.

2. There's nothing like a proper condenser on this scope. Light is beamed up from the LED unit in the base, where there's a removable diffuser but no iris. Removing the diffuser significantly degrades image quality. Just under the stage there's a rotating plate with various sized holes in it. Roughly speaking those act like field stops, but even the smallest of them is too large to have much effect even with the 4X objective. Brightness is adequate except at bit dim at 40X with the 25X eyepieces. Overall quality of the illumination is pleasant, however.

3. The optics arrived clean, except for one fairly large smudge or lump on a glass surface at the bottom of the non-removable eyepiece tube. That would be a challenging place to clean. I stopped after failing to dislodge it with a puff of air. The defect appears as a large fuzzy dark area in the eyepiece view, progressively more visible at higher magnifications.

4. The unit is provided with a 25X eyepiece in addition to the normal 10X. For me this mostly provides empty magnification but it could be helpful if you have vision problems. The 10X eyepiece is labeled "WF10X", but from the captured imagery I calculate that the field is only 15 mm (FN15). (I should have measured that directly, but didn't think of it until too late.)

5. Both eyepieces provide too little relief to be used with glasses.

6. The objectives appear to be JIS, not DIN. They have RMS threads, but the parfocal distance is more like the 36 mm of JIS rather than 45 mm of DIN. There is just barely enough travel of the stage to focus a DIN 10X objective.

8. Central sharpness of the objectives is not bad, about as suggested by their NAs assuming that the 4X is really 0.10 . Compared to other objectives I have, the central resolution is maybe 1 element less on the standard test charts.

9. The objectives are advertised as achromats, but even that might be some exaggeration. The 10X objective shows strong color fringing, then 40X less so but still obvious. Here are full frame views using the 5X, 10X, and 40X objectives, photographed using handheld afocal technique through the WF10X eyepiece to capture what my eye saw. The target here is an Edmund Optics 1951 USAF Hi-Resolution Target, stock number 58-198, group 3 element 1 = 8.0 line pairs per mm.

5X (the uneven illumination in this image is probably due to having the camera slightly off center): 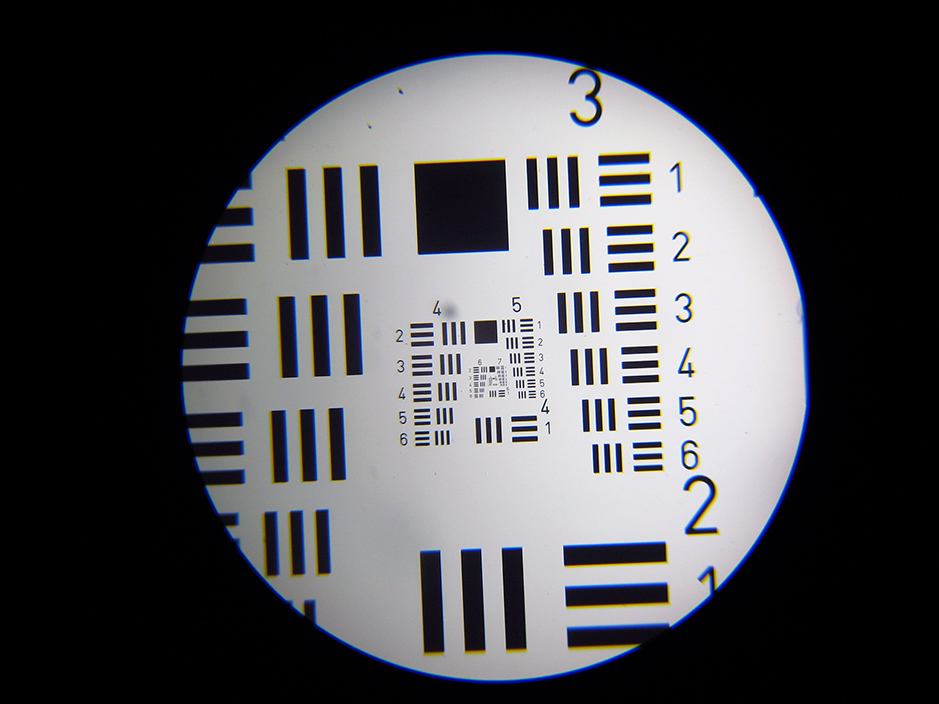 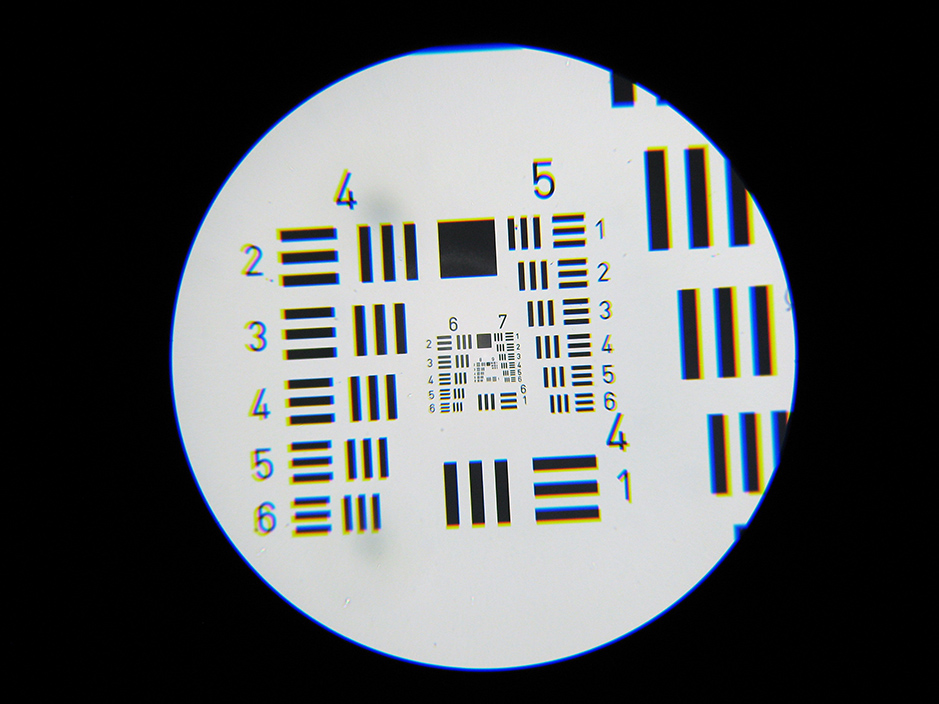 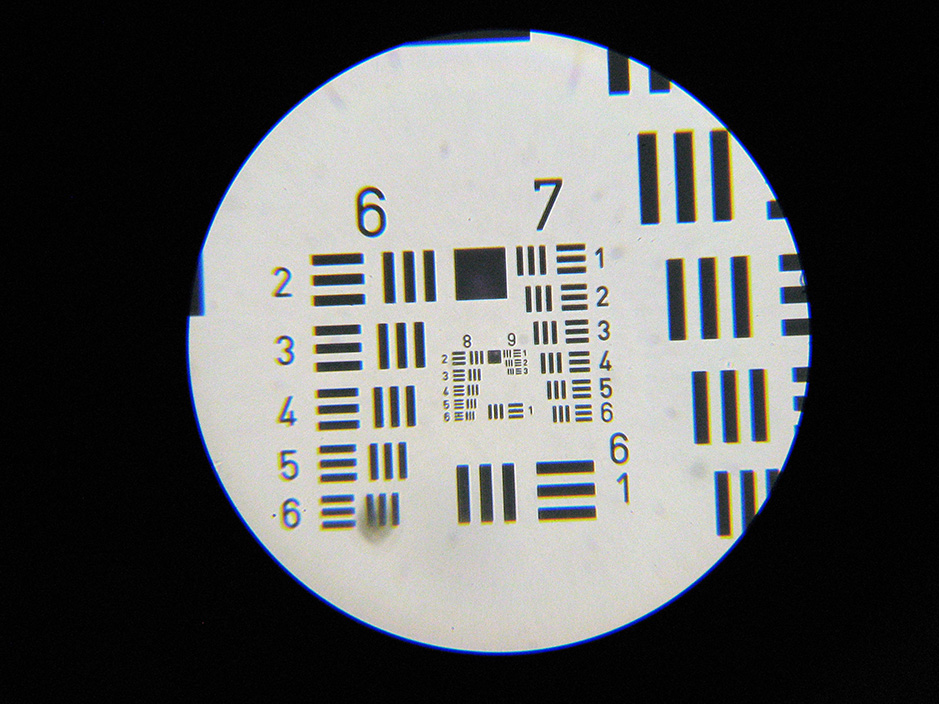 I have no idea what if any of this might be useful to somebody, but since I had the scope in hand I thought I should "wring it out" a little bit.