I recently wrote that

As far as I can tell, the bodies of the Amscope B390 and T490 series microscopes appear to be clones of an Olympus CH, which means they're built around a focus block with 25 mm total travel at 0.200 mm per rotation of the fine focus knob. Those bodies also come with a gear-driven XY stage.

Noting that Amscope regularly runs half-price sales, what I suspect is that for around $250 you can purchase new a decent focus block plus XY positioning stage, which incidentally comes packaged with some low end optics that assemble to form a microscope you can play with too. It's possible you could get by with even lower end scopes from the same manufacturer, but I don't have any detailed information about focus mechanisms on those.

I'm phrasing this carefully -- "I suspect" -- because I haven't actually done it and there could be some critical flaw about the hacking-it-apart bit. It's hard to imagine anything going wrong with just using the scope base unmodified for focusing, however.

New readers are directed to http://www.photomacrography.net/forum/v ... hp?t=11008 for a simple setup that mates a stepper motor to the fine focus knob of a microscope base. That particular setup has been measured to provide reliable stepping down a small fraction of 1 micron (HERE).

As it happens, Amscope recently ran one of their half-price sales and I couldn't resist finding out whether my speculation was correct. So I bought a couple of different scopes through Amazon (simple returns, just in case) and I'm now investigating what aspects are good and not so good.

Right now, I am happy to report that the focus block of the T490B looks to be as good as I had hoped.

For the record, this is the base I'm talking about: 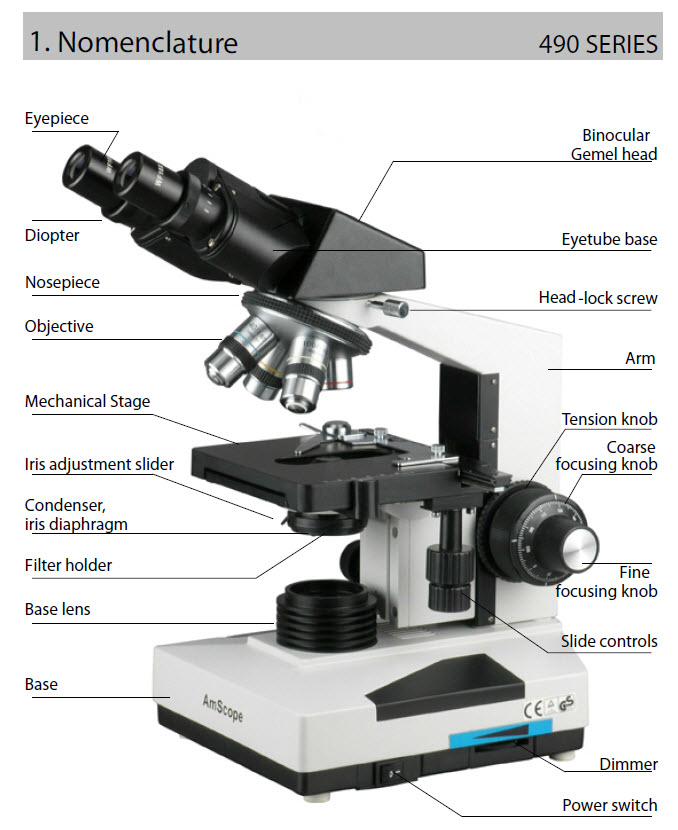 The focus block has just short of 30 mm total travel, at 0.200 mm per rotation of the fine focus knob. The controls feel smooth, both focus and stage XY.

[Correction, 5/13/2015: After being alerted to small discrepancies by experience with another focus block (HERE), I have carefully measured the gross travel on this Amscope instead of trusting to a rough measurement and faith in the markings. The measured value turns out to be approximately 0.215 mm per rotation (10.75 mm per 50 rotations), instead of the 0.200 mm previously assumed. All values quoted in the remainder of this post should be scaled by a factor of 1.075 (7.5% increase) to account for the correction.]

With the smallest nominal step size (1/3200 turn of the fine focus knob), what I measure is a sequence of 450 moves whose average length is 0.0625 micron (1/16 micron) and whose largest move is just under 0.19 microns. This sequence shows a periodic pattern that every 16th and 32nd step is especially large. That's the same pattern that I saw with an Olympus CH base, and I'm quite confident that these large steps are due to a quirk in the Cognisys controller's motor driver. 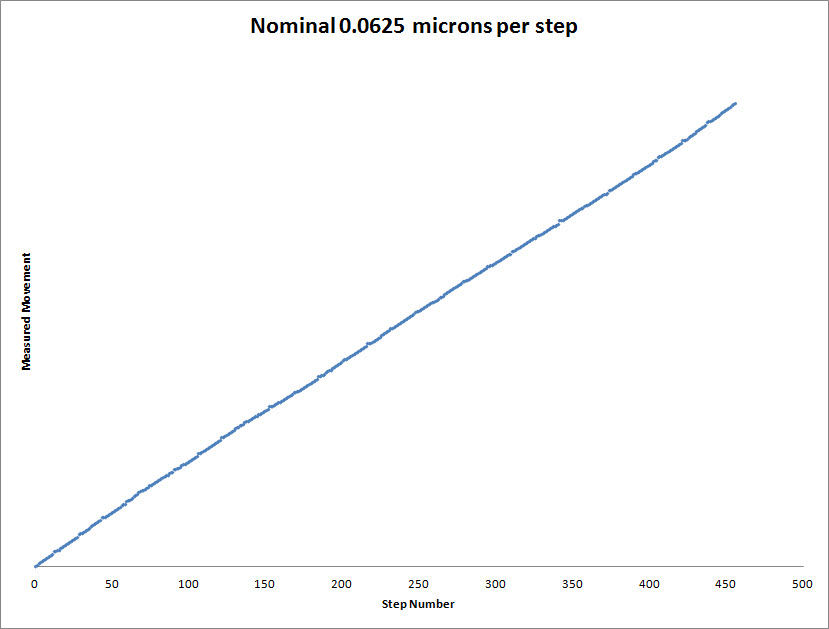 With a nominal step size of 1/400 turn of the fine focus knob, I measure a sequence of 1000 moves whose average length is 0.5 micron and whose largest move is about 0.68 micron. In this case there are some interesting small oscillations in the measured step size, but nothing that would ever be seen in practice and I can't tie them to any particular feature of the scope or the experimental setup. The total displacement curve is so smooth that it doesn't plot well at screen resolution, so instead I'm showing the individual steps:

In passing, I'll confess that it was a lot more trouble than I expected to make these measurements. I was getting a significant amount of movement between target and lens even when I had the base under test held in one position and just ran a sequence of images. Something was moving but I had no idea what. So I went around fastening things down better and re-testing, getting what were mostly modest improvements. The final big improvement was when I switched the optics assembly from a rigid tube to a bellows. Apparently the mechanical shock from mirror and shutter cycling was getting coupled through the tube assembly to slightly shift the front lens assembly in its holding bracket. The data got a lot cleaner when I switched to bellows with independent clamping of the front and back standards onto a hefty base plate. (So yes, my earlier tests that turned out unexpectedly well were beginner's luck!)

Anyway, back to the microscope base. As discussed above, I'm happy with this focus block, at least for this sample at this time. I have no information about robustness and durability, except that by appearance the mechanism looks and acts almost exactly the same as my Olympus CH base. The dimensions are clearly different (including the head dovetail diameter), so this is not really an Olympus CH clone as I had suspected. But functionally it seems to be a suitable replacement, and of course it's available new on a routine basis.

I hope this helps out somebody else. For myself, at least my curiosity on this point is satisfied for the moment.