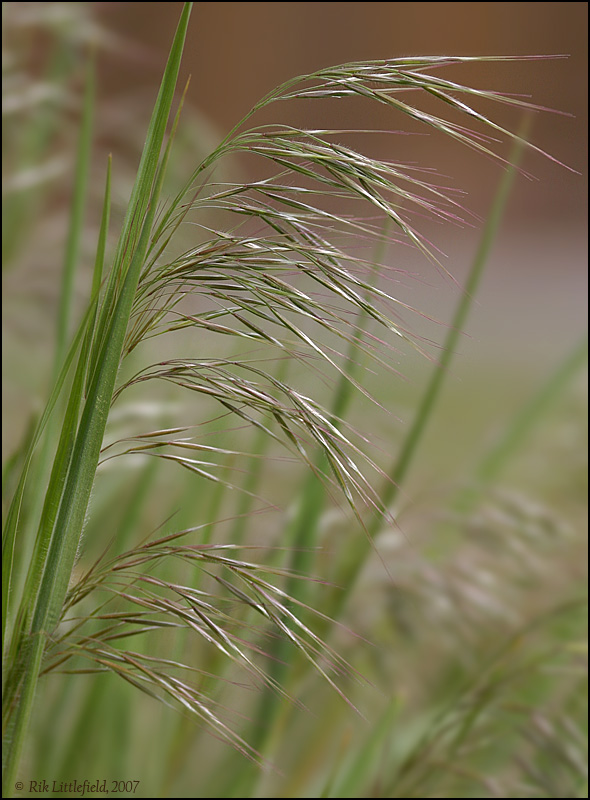 This is a particularly luxuriant head of "cheatgrass" (Bromus tectorum). Spring is a wonderful season for cheatgrass. It's an annual, and at the first sign of warmth and water, the seeds formed the previous year sprout, and the little plants start growing furiously. For a few weeks, a landscape infested with cheatgrass looks great! So lush, so green!

But, oh, so temporary.

As quick as the stuff grows, it sets seed, dries up, and dies. Poof! What was a lush green field of grass becomes a grayish brown tinderbox just waiting to catch fire. If you were expecting pasture, guess again -- you've just been cheated!

Originally European, now widely introduced in dry areas in much of the world.

Cheatgrass is an invasive weedy annual that sprouts quickly in spring, grows rapidly in dense mats, and produces tons of seeds that are easily recognized as they poke into socks by the hundreds while walking through it. This plant generally outcompetes native bunchgrasses as it sucks moisture and nitrogen from the soil, and eventually produces hot wildfires resulting in sterile burns well-suited for its rapid spread and ultimate dominance.

Great stuff, eh? And nobody has a clue how to get rid of it!

But hey, it's spring now. Sure looks nice, doesn't it?

Viewed like this - as a solitary study, Cheatgrass presents a certain languid elegance that speaks of balmy summer days rather than itchy feet and destructive grass fires!

Interesting write-up and completely new to me - thanks.

A new one to me Rik and as Bruce mentioned, an interesting write up. Seems as though I have seen this grass before, looks familar but I cannot say for sure. One time I did investigate Dallas Grass and found out that if cattle eat too much of it, it has detrimental effects on their behavior. Very nice image there Rik, enjoy the upcoming, hopefully, nice weather.

Shapes of which all the visible was made of.

Only one element I find disturbing the whole impression. A brown thing near the copyright sign. Not being a carper but looking at perfection every detail counts.

A very beautiful picture Rik. Nice graceful form and silvery sheen. Now that I know what it is "an invasive weed and tinder" I hate it....

I bet a giant swarm of locusts could take care of it.

We are getting more snow up here in new Hampshire today, so my grass is buried in 6" of snow...very strange winter this year..."global warming??"
Take Nothing but Pictures--Leave Nothing but Footprints.
Doug Breda
Top

MacroLuv wrote:Only one element I find disturbing the whole impression. A brown thing near the copyright sign. Not being a carper but looking at perfection every detail counts.

Thanks, Nikola! That thing had been bothering me too, but somehow it hadn't occurred to me to fix it. Eliminating the brown thing (it was the dead end of another leaf) also let me move the copyright text into the corner, where I really wanted it in the first place but couldn't put it...because the brown thing was in the way!

beetleman wrote:I bet a giant swarm of locusts could take care of it.

Doug, that's been tried (sort of

It’s possible to partially control cheatgrass through grazing, but there are significant costs. First, you need to fence in a large number of animals within a small area for a brief amount of time, requiring labor and fencing supply costs. Then, to prevent damage to desired vegetation and provide sufficient feed, the animals must be moved often, requiring additional labor costs. Even if all of this is done correctly, a cheatgrass plant still needs to be clipped off (bitten off) at least 12 times to stop seedhead formation. This is nearly impossible, even under intensive grazing.

The other problem is the seeds. They stay viable in the soil for 2-5 years. So you not only have to stop seed production this year, but for the next 4 years too. Miss one plant, and you'll soon be in deep trouble again.

A single stalk of cheatgrass can produce 1,000 seeds and an acre can generate more than 500 pounds of seed. In comparison, it normally takes just 10 to 20 pounds of grass seed per acre to establish a lawn in the typical American yard. Even at a mature height of just 5-10 cm (2-4 in), cheatgrass can still flower and produce viable seed.

So far, the best that anybody has come up with seem to be selective herbicides, applied repeatedly to control, not eliminate. Unfortunately those chemicals are not nearly as selective as you'd like [ref]. I suppose that some years down the road somebody will invent a devastingly effective plant disease that infects only Bromus tectorum. Let's hope they have sense enough to not turn it loose.

Hey there Rik - I like this composition and the depth that it conveys. The subtle changes in color in the background are nice too. I believe I have seen this grass also, but I sure didn't know anything about its short lifespan. Thanks.

Thanks for the compliments, guys! It's nice to know that the composition looks good to somebody besides me. Always hard to tell about that...

It's very likely that you've seen grasses "like this". But be careful about reading too much into general appearance -- ID'ing grasses will drive you a little crazy.

This one genus Bromus contains about 160 species worldwide (according to Wikipedia). There are 17 in the Pacific Northwest alone (according to Hitchcock and Cronquist, pp 624-627). They all look somewhat alike, but...


Hitch and Cronquist wrote:The perennial species are palatable and readily grazed; a few, especially B. inermis, are widely used in hay-meadows. The annual species are mostly weedy and of little forage value except for a short period before maturity; when mature some species become potentially injurious because of the hardened, sharp, awned fruits.

It's this one particular species that seems to be so troublesome. Bromus tectorum, common names Drooping Brome, Downy Brome, and cheatgrass. http://en.wikipedia.org/wiki/Drooping_Brome has a good article, and Google searches will find you as much further reading as you could possibly want.

Very nicely done. They were complaining bitterly about this grass in the Great Basin, for some of the same reasons you've listed. IDing grasses is indeed a booger. I'm not really a plant person, but once got interested enough in it that I picked up a book specifically on IDing grasses. I didn't follow up, and am not even sure where the book is now!

You know a Beryllium nutron fired directly into the nucleus of an atom of U238 would solve that grass problem but I would not advise such behavior. Half-lifes can go on for what may seem like forever. Maybe a bushhog will just have to do.